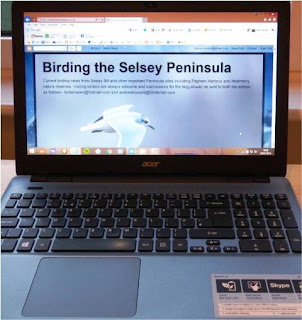 A blogger’s tale – a short history of the 'Selsey Blog'

I’ve spent a good chunk of my life birding the Selsey Bill and Pagham Harbour area. Much of it was during my working years, but after retiring from a career in 2001, then continuing with part-time jobs until the end of 2012, the time eventually came to fully retire and devote all my energy to my own projects. One of the things I’d always wanted to do was to fully document the birding scene on my regular patch at and around the Bill, so I thought about another publication, having done several previously. However, I realised that technology had moved on considerably, so an online documentation seemed to be the way forward, despite my own limitations. A flick through the SOS website – which also gave links to other blogs – and an idea was born: I’d start up a Selsey Bill blog!

So it was that on 11th March 2013, barely knowing what a blog was, I tentatively opened a basic ‘Selsey Bill & area birding blog’ – that first attempt adding only a few back-dated Selsey Bill records. It didn’t stay that way for long! Having mentioned it to the locals, almost immediately one individual – Andy House (AH) – showed great enthusiasm and a willingness to assist me with what he considered a long-overdue development. The rest, as they say, is history – though it is worth documenting how things progressed.

Early May 2018 at the Bill, with the locals joined by a contingent of Hants birders. The day's sea-watching log and other sightings will be on the blog by evening.

It soon became clear that other birding areas on the Selsey Peninsula could usefully be included, and over time the blog name changed no less than four times, partly due to my reluctance in dropping the words ‘Selsey Bill’ from the title.  This change was largely driven by Andy – he was right of course – and we decided our blog would cover the whole of the Peninsula area, finally settling on the title ‘Birding the Selsey Peninsula’ to fully reflect the fact. Even so, many still prefer to just shorten it to the Selsey blog! One of the things I’d wanted at the outset was that, unlike many self-centred blogs I’d seen, it was not just going to be about me and my own personal exploits, but rather it would be an up-to-date account of birds on the Peninsula as seen by a regular group of observers, so that anyone visiting the blog would have current news of what birdlife was around. And I do mean current..... unlike many other sites, where news is at least a day or two behind and often more, not always of much use when planning tomorrow's visit! 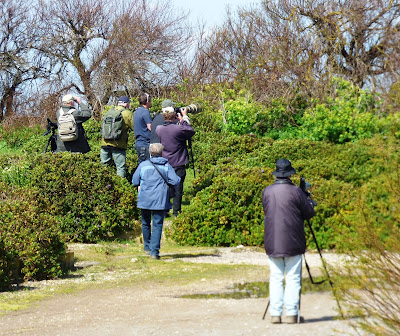 A mini-twitch of locals viewing a Serin in Bill House garden  - the news was soon put out!

Andy fully embraced this concept, and over time and with a bit of trial and error, we soon developed a routine, or to be more accurate a system evolved that worked for us. Andy is (allegedly) employed full time so fits his birding and blog duties around his work, but somehow it seems to all fall into place, though it is quite demanding, especially at busy times of year. A certain amount of dedication is needed in getting the news out, and we make several updates daily, as necessary. It must be admitted though that the Blogger system we use has a number of idiosyncrasies and to say the least it can be very frustrating at times! Despite all our efforts however, we realised that occasional commitments (e.g. holidays) would inevitably mean that sometimes neither of us could cover the blog, so the need for a third person on the editorial team was apparent. Fortunately, we soon filled the vacancy when Bart Ives (BI) agreed to become deputy editor. Bart is a working man with a family, but considerably younger than Andy and I, with a more current knowledge of the world of technology. He is now considered our ‘techno-kid’ after introducing innovations like links to YouTube, Twitter and video clips!

March 2018 saw the blog’s fifth birthday, when our page-hit counter passed the three-quarters of a million mark. Space prevents too much detail here, but some of the features that have evolved include the use of different coloured text for certain areas of the Peninsula, and the inclusion of many photographs. The latter is sometimes the subject of comment, especially as range and light/conditions may not produce more than an indifferent or poor record shot, but although we always strive for good results, the photos tell it like it is. Whilst there are many excellent blogs that can and do show a gallery of fine photos, ours is really more of an illustrated diary of events, where we aim to show at least some photos every day – in all conditions, not just on those fine days that are good for photography! Perhaps though, our main strength is in the currency of the news we provide – all completely free, backed up with photos where possible and trusted by the professional bird-news companies. We don’t wish to stagnate, so have tried and will continue to try a number of different ideas and suggestions to keep things fresh, adopting improvements where possible, but basically we follow the maxim ‘if it ain’t broke, don’t fix it.’

We do rely on news updates from the Selsey regulars and an increasing number of other visitors and contributors, plus of course our own efforts in the field. Andy, Bart and I sometimes have informal meetings to discuss ideas, problems and occasionally feedback, which is important. It would be fair to say that by and large the feedback we do get is very positive indeed, and without blowing our own trumpet some of the comments received are very flattering. It all makes the effort very rewarding and worthwhile, but we are not complacent and are willing to consider any sensible suggestion – bearing in mind the amount of available time, expense and opportunity each of us may have. It’s not quite true to say it has grown into a monster, but it does mean a daily commitment; I think I can speak for all three of us when I say that we can be rightly accused of sometimes ignoring certain domestic duties whilst sat in front of our computers, and in my own case at least the words “you’re not listening are you?” or “you can’t still be on that blog” have a familiar ring.

There is one other person who, although not part of the editorial team, still has a considerable part to play in the smooth running of operations. Our Log-keeper Justin Atkinson maintains the sea-watching logs at the Bill throughout the year - and thus compiles the official record which is forwarded to the Sussex Ornithological Society. This is no mean task and requires a good deal of effort, especially when trying to run a business and keep a family, but his accuracy and attention to detail is well known, for which we are all grateful. 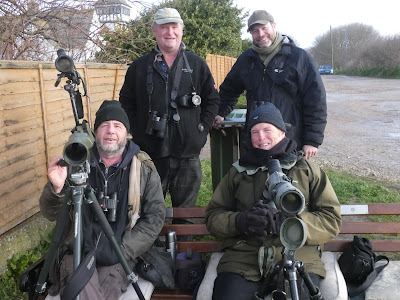 A rare photo of our Log-keeper and the editorial team together; clockwise from bottom left are JA, AH, BI and OM

So where do we go from here? Well, we have no plans to make drastic changes in the foreseeable future and will continue the blog whilst it serves its purpose. The Selsey faithful have become a team, supplying bird news and perhaps even searching some areas on the Peninsula they might otherwise have overlooked, whilst the number of visitors to our site continues to grow. And five years of valuable data is now stored on the site’s archive, available for research. Time will tell how long the blog will last....but here’s to the next five years!    (OM)