PERSONAL REFLECTIONS: A SHORT HISTORY OF BIRDING AT SELSEY BILL
Part 1 – The early years 1959-79
I’ve never actually lived on the Selsey (Manhood) Peninsula, but I’ve spent a great deal of time there and still visit regularly to this day. It’s now forty years since my interest was first kindled by Bernie Forbes taking me to sea-watch at Selsey Bill, and I can still remember the excitement. I also remember how straightforward my journey onto the peninsula was back then, unlike the journeys I make nowadays. I dread to think of the number of miles I’ve travelled back-and-forth since that first trip, but even so I still consider the area my local patch. Inevitably of course I’ve noticed a good deal of change, too often to the detriment of wildlife, though despite this, the Selsey area remains a wonderful place for a day’s birding, with a whole range of habitats all within a short distance. I’ve always been keen to document the birds of the area, which has resulted in several publications over the years, but whilst researching in 2009, it dawned on me that it is now fifty years since regular observations first began at Selsey Bill - wow! So what’s happened in that time?

Those that did the maths above will realise that my personal Selsey ‘career’ commenced in 1972, but things actually started way back in 1959. At that time a regular group of observers realised the potential of the area and began a programme of almost complete coverage, especially during spring and autumn, which was to last until 1965. A small observatory was set up during this time, operating from a rickety wooden hut, and the first Selsey Bill Bird reports appeared; initially half-yearly and consisting of typed sheets in a plain manila cover, later to become annual, with duplicated foolscap sheets and a cover picture of each year’s memorable bird. Many young observers cut their birding teeth here during these early years, some destined to become more famous in later life; Richard Porter, Mike Shrubb and B.A.E. ‘Tony’ Marr are three who spring to mind amongst a veritable ‘Who’s who’ of ornithological names of that time. I must pay tribute to these early Selsey pioneers; indeed members of this group – largely inspired by Tony Marr – were also responsible for founding the Sussex Ornithological Society in 1962. Amazingly, one of those who regularly attended in those early days is still watching there today – none other than the remarkable Beryl James (though perhaps son Paul has a similar claim as he was first taken there as a child!) The Bill-tip area held much scrub cover and vegetation, ideal for recording and ringing migrant birds, but by the end of 1964 that situation was changing. The expanding holiday trade and the growth in residential and leisure development began to cause the loss of natural habitat, so by 1965 many of the regular observers decided to switch locations to Beachy Head. This left only a few casual or local observers to continue at Selsey, although one dedicated individual in particular remained (H.P. Kay-Robinson), even managing to produce more ‘plain manila cover’ reports up until 1969, often assisted by a young Dave Flumm. Thereafter, although the site was never abandoned, information became erratic for several years.
So it was that in 1972 I paid my first visit, by which time a new generation of Selsey birders had taken an interest, realising as I did that some great birding was still to be had there, for even if the sea passage totals were sometimes not as great as at other sites, the variety of species and regular close views often provided some of the best birding in Sussex. Added to that, there was also a great chance of seeing unusual passerines, for even then the natural habitat was comparatively unspoilt – a situation that was to dramatically change in future years. My visits to the Bill for the first couple of years were infrequent as I lived in Brighton; furthermore my birding mentor Bernie was more keen on walking me across downland or heading inland to check bushes, brooks and commons and didn’t have the patience for a lengthy or slow sea-watch (and still doesn’t!!) When I moved to West Sussex in late 1974 the draw of the sea was to prove irresistible and visits quickly increased, but being new to birding I needed help and the company of others. How I envied those experienced enough to confidently identify a distant row of black dots skidding over the horizon as Common Scoter. Just how did they know that funny tern was an adult Little Gull? Surely that little brown finch arriving from the sea was unidentifiable, so what makes it a Redpoll? Would I ever know enough to separate the skuas?
As I ‘learnt my trade’ through the 1970’s I was to meet some great birders; Tony Marr would occasionally visit to keep an eye on us newcomers and steer us along the right path, whilst one of the new boys was Chris Janman, who still watches there today. Although small in stature, Chris was big on reputation and kept me and others enthralled with his twitching tales from the Isles of Scilly. What’s more, he had a camera, a proper one, from which he produced some impressive slides. As my experience grew, I became ever more enthusiastic, as did Chris, and the bond between us strengthened. I particularly remember one bitterly cold day in February 1979, sitting in Chris’s old Ford Anglia and jumping out to log a Pink-footed Goose arriving from the sea in a snow flurry! Just prior to this, we had discussed the possibility of jointly compiling a new publication to cater for the renewed interest, and sure enough our Selsey Bill (West Sussex) Bird Report 1979 duly appeared.
There were by now many other observers attending, including a regular clan from Hampshire; Ron King, Mick Hay, Barry and Margaret Collins, Dick Barrett, et al, plus Sussex notables such as Alan Kitson, Charles James and Tim Parmenter. And a not-so-notable newcomer Mervyn Jones, who little did I know then was due to figure large in my birding life. So, twenty years after the first pioneers had started watching at the Bill, it was thriving again with a new generation of observers and a new bird report. What followed is a story for another day.

PERSONAL REFLECTIONS: A SHORT HISTORY OF BIRDING AT SELSEY BILL 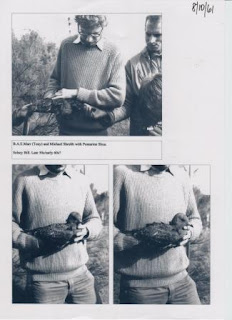 A young Tony Marr, accompanied by Mike Shrubb, with a juv Pomarine Skua found on the beach at the Bill tip, Oct 1961.
Note the amount of tamarisk and scrub in the background, and a mist net cane, as ringing used to occur at this small observatory of the time. Tony told me they actually used an old duffle coat to capture the moribund bird; sadly the vegetation here (and the duffle coat!) have long gone.
(photo: courtesy of Tony Marr). 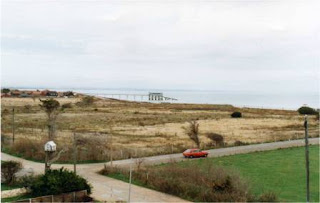 Before and after: this photo (above left) was taken from the Bill House tower in Dec 1990 and shows how the area used to be just a year after the derelict Pontins site was cleared. The scrub and encroaching vegetation right on the coast proved to be a magnet to migrating birds until late 1996 when sadly it was developed.
This photo (below) was taken exactly a decade later from the same point and shows how the final development has left precious little habitat for wildlife with only the 'Oval field' ex-football pitch remaining amongst a sea of houses. 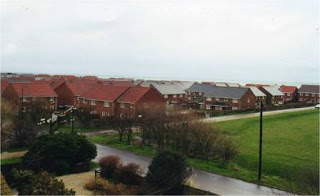 This photo shows the old Pontins site in its heyday. 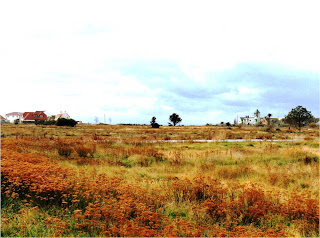 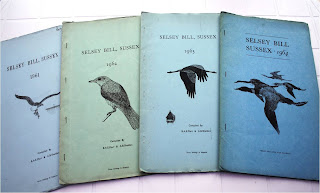 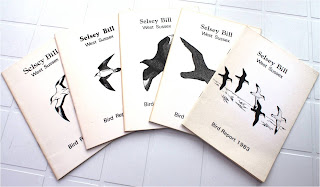 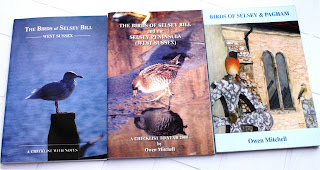 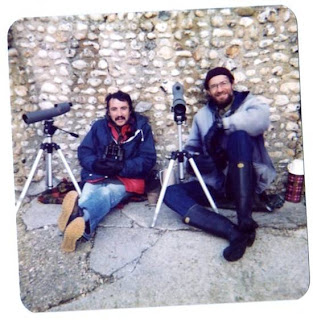 Selsey pioneers! Richard Porter (above left) and Tony Marr pictured in 1981. These two, as young birders, were involved in the early observations at the Bill from 1959 onwards. Both have gone on to make a name for themselves in ornithology....... !! Interesting to note how birding clothing and equipment has changed. Compare this with this recent image (below right) of the regulars on the wall; pictured left-to-right are Justin Atkinson, Chris Janman, Sam Hill and Paul Bowley (and ?) This is the normal base and watch point for sea-watching activities; however if the wind is from the east or southeast, then observations are normally switched to the 'south-east corner' (bottom left) - this offers a much better degree of protection when the wind is in this quarter. 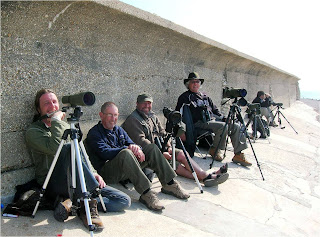 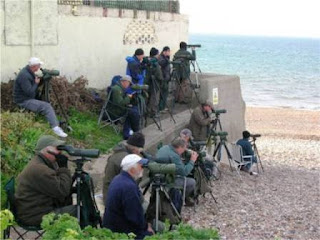 With a sea-level watchpoint there is a fairly low horizon, so markers on the horizon are important when trying to locate passing seabirds. One of the most identifiable and obvious is the Mixon (below) which is known to all the regulars as 'the Mile basket.' It is actually just over a mile offshore; it is pictured here in a stormy sea. Recently, Justin Atkinson consulted an Admiralty chart which actually showed it was 1.1 miles off the Bill-tip (not sure yet whether statute or nautical miles), but for interest other markers are as follows:-
red buoy - 1.9 miles, green bouy - 2.2 miles, Nab tower - 7 miles and Culver Cliff (Isle of Wight) - 12 miles. 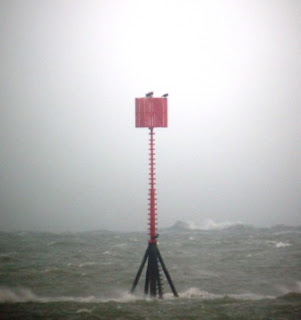 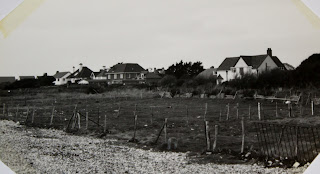 This photo dated spring 1983 shows the horse grazing field adjoining the beach and backing onto the gardens of large detached houses; it became known as the 'shrike field' after attracting a Woodchat. Note the large house on the right, which was demolished and sold with the land for development. It subsequently turned into Cherry Gardens, where four bungalows were built and sadly the field suddenly turned into extended gardens - see below (dated 1999). Further reductions in habitat have regrettably occurred since then and green open spaces are now at a premium at the Bill. 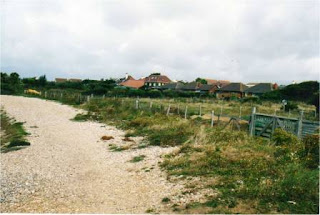 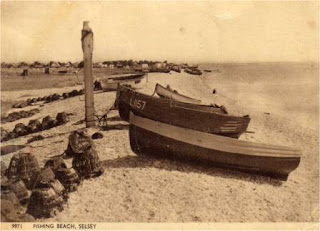 How times have changed! This old photo is actually a postcard that was donated to me years ago by CRJ, and shows Selsey East beach area in 1959 (photographer anon). Note the wide open spaces and the lack of fisherman's huts and housing - a very different view from the present day. 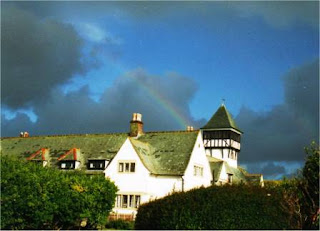 Perhaps one of the most enduring sights at the Bill is that of Bill House, shown here at the end of a rainbow during a storm. The tower is in fact the original old Coastguard tower, but the building has long since been a Nursing home, as it still is today (though several proprietors have come and gone). In the 1990's we were permitted to use the tower for sea-watching operations by the then owners, but that has long since ceased. The gardens here are probably the single most important bit of habitat left on the Bill-tip. 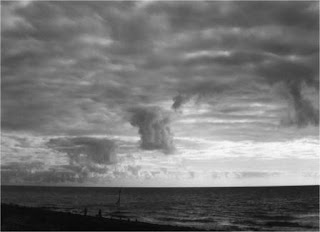 How's this for a stormy sky? This is actually a colour photo, not black-and-white (dated 7th Nov 1998) and shows how the  the sea and weather conditions can soon change at the Bill. In forty years I have seen Selsey Bill in all its moods from flat calm to tornado, which I guess is part of its charm! 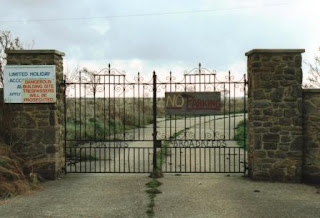 Gateway to Paradise! The entrance to the old Pontins Broadreeds holiday camp still remained after the site was demolished  - note the name within the wrought-iron gates and the warning signs. This view is dated autumn 1992.