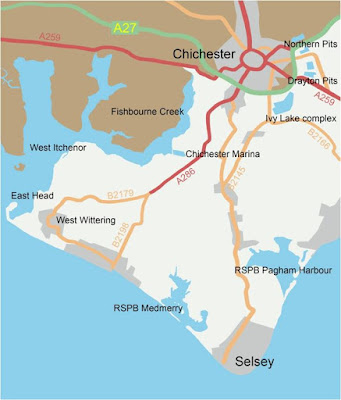 The Selsey Peninsula Recording Area.
The whole of the pale area shown above is our recording area, extending from Selsey Bill northwards to the A27 Chichester by-pass. Note that the Chichester gravel pits area also just includes the Drayton and Westhampnett pits to the north-east (top right). 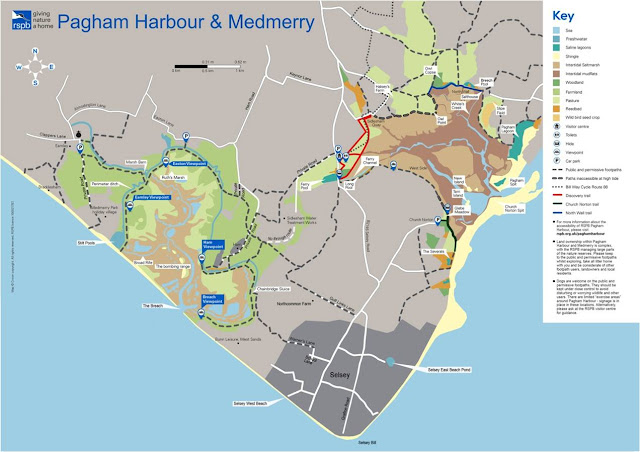 The updated Selsey Peninsula Bird Checklist follows and currently stands at 340* species; note that in the case of rare and scarce species this relates only to records officially accepted by the British Birds Rarities Committee (BBRC) or Sussex Ornithological Society Records Committee (SOSRC) as appropriate and regrettably unsubmitted or unconfirmed records cannot be used. This is important to maintain the credibility of the List for future researchers. Several subspecies, such as Black Brant, are not included in the list (although they are potential future splits or are already considered full species by some authorities), nor are they included in the overall total, which relates only to the official British Ornithologists' Union (BOU) list of species - per their categories A,B and C, as recently amended to include the recommendations of the International Ornithological Congress (IOC).**
Feral species are generally excluded, thus a record of 14 Snow Geese in early 1983 has sadly had to be omitted. One species however - Ruddy Shelduck - is included: although most modern records are harshly and probably unfairly deemed by the authorities to refer to escapes and ferals, there are also two historic records, from 1890 and 1892, of birds shot at Selsey, part of a genuine irruption, so the species surely has a valid claim to be included in any case.
As will be seen in the list, there are also two other species that are included on the basis of historic records only, both of these being considered valid.
{*subject to acceptance of Elegant Tern (2017) and American Royal Tern (2018).}
(**Note that Hudsonian Whimbrel is now demoted to sub-species status only, per IOC). 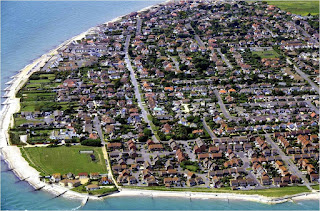