Sunday, 9th November: Cloudy with the risk of a few showers but becoming brighter later. After yesterday's southerly gales it was back to lighter westerly-based winds this morning; however the prospects for the coming week indicate more unsettled weather with heavy rain and strong winds, so sea-watching is likely to feature again soon! It's interesting to note that apart from at the Bill yesterday, good numbers of Pom Skuas were also noted moving in the western Channel, e.g. Devon, though only a few seem to have been logged further east... long may it last!!
As mentioned in earlier editorials, a number of issues have arisen which I've now done my best to clarify and explain; herewith the last two..... firstly, Personal queries: A number of personal emails are regularly received by the editors, usually seeking further information, site details or bird information etc. Whilst we do our best to oblige it isn't always possible for a number of reasons, but please be prepared to show in your message it is a genuine enquiry. In my case at least spammers are an ever-present threat, so if you're unknown to me and you fail to give any details of yourself then you can hardly complain if I hit the delete button! Lastly, Non-avian news: As regular visitors to the blog will be aware, we do include a limited amount of news of a non-avian nature, ranging from other wildlife forms to local news such as Lifeboat rescues and storm damage. Please be aware that whilst the editors are happy to receive submissions on such things, especially insects and other Lepidoptra, (is that how you spell it?) we claim no level of expertise, so submissions are included in good faith. If you consider such a posting is erroneous, I'm sure you'll promptly notify us! Phew, that's it, thanks for your patience, now back to the bird news. (OM).
Selsey Bill: (0700-0830hrs) (JA/SH/PM/AGB/AH)
Great Northern Diver - 7os
diver sp - 1W
Great Crested Grebe - 2E, 2W, 1os
Gannet - 1E, 4W, 6os
Little Egret - 1ob
Brent Goose - 1E, 1W
Wigeon - 1W
Tufted Duck - 1W
Red-breasted Merganser - 5W, 1 os
Eider - 3os
Common Scoter - 2E, 3W
Ringed Plover - 19E (in one flock)
Mediterranean Gull - 3W, 4os
Meadow Pipit - 3N
Medmerry: West Sands to the breach - The Great Northern Diver was showing well again on the big pool from the viewpoint, seeing off the local Cormorants when they came too close! Also 4 Common Scoter on the sea, a pair of Stonechats on the rocks, a Peregrine briefly disturbing the peace, 4 Pintail amongst the Wigeon and Teal, a Dunlin, a Knot and 2 Bar-tailed Godwits with the 20+ Grey Plovers, and 100+ roosting Lapwing. (AH/BI/PH/BFF et al)
A Snow Bunting was heard several times near the sluice at the end of the caravans, but unfortunately could not be seen. (ARK/MH)
A Short-eared Owl was along the bank towards Chainbridge field this afternoon. (PH) 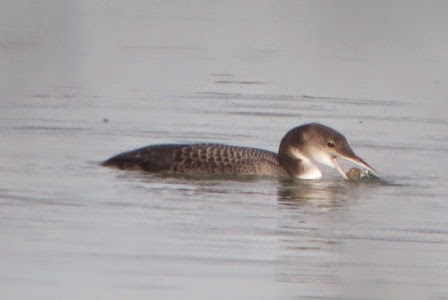 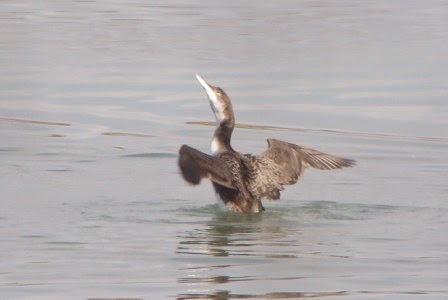 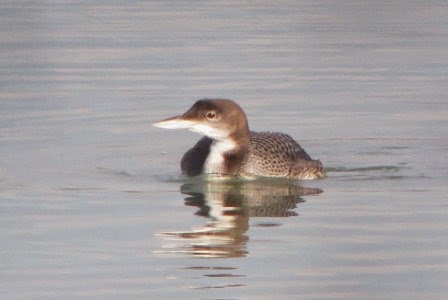 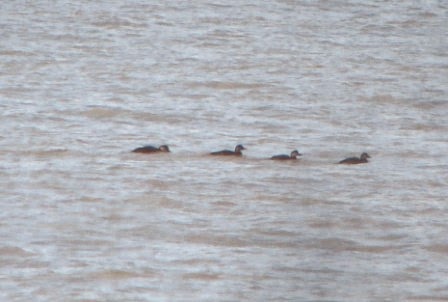 Medmerry: Easton Lane west - This morning there were 2 Little Owls at Marsh Farm, a Kingfisher, a flock of 16 Snipe together, at least 10 Stonechats, 30+ Yellowhammers and similar of Skylarks. (S&SaH) 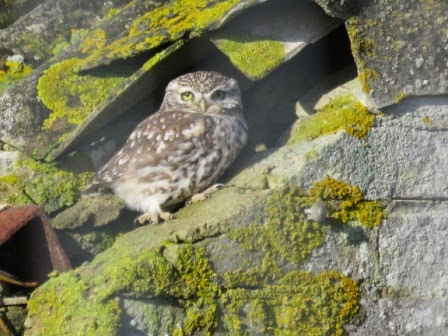 Little Owl at Medmerry (SH)
Church Norton: A Short-eared Owl briefly appeared at the end of the spit, being mobbed by gulls, before appearing to land on Pagham Spit. The two Spoonbills were also present, roosting on the far side of Tern Island (per JD). There were no birds at all on the sea, despite the flat calm, but the harbour was full of commoner waders on the rising tide. (AH)
This afternoon there was a very late Wheatear on the concrete spit. (S&SaH) 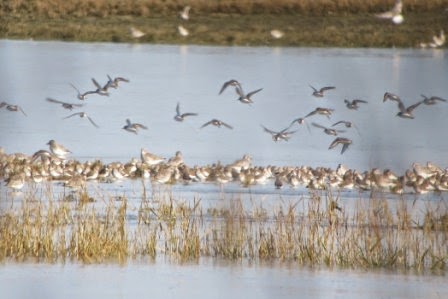 Dunlin and Grey Plovers from Church Norton (AH)
Ferry Pool: The Ruddy Shelduck was on the pool early this morning. (BFF/IL) Later on a Grey Wagtail was in the Pumping Station yard, and a Greenshank came in to roost with 60 Redshank. There were also 8 Black-tailed Godwits and 150 Lapwings on the pool, plus the usual Shoveler and Teal, and 8 Stock Doves and 20 Curlew were on the field. (AH)
The Ruddy Shelduck was back again late afternoon along with 12 Common Shelduck, 15 Avocet and 2 Green Sandpipers. (AH) 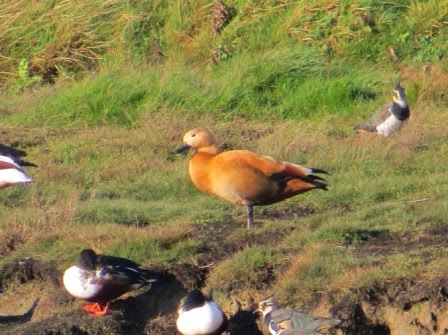 Ruddy Shelduck on the Ferry (BI) 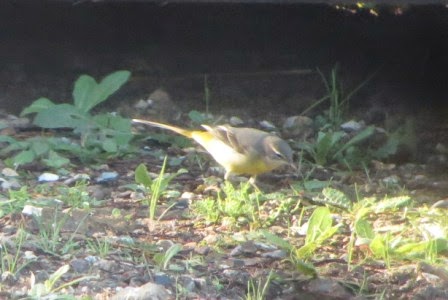 Grey Wagtail (above), Greenshank & Lapwings at the Ferry (AH) 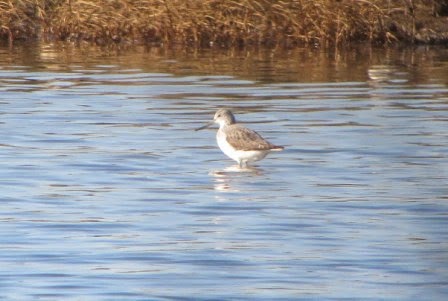 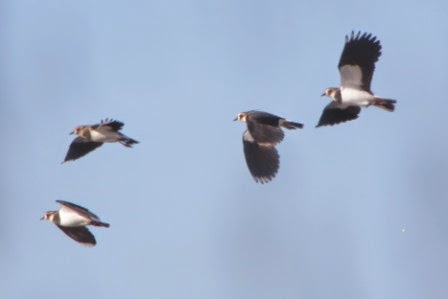 Pagham Spit/Lagoon: Not much to report this afternoon - highlights were a couple of Kingfishers (one on the Lagoon, one in the harbour), a Stonechat and a Rock Pipit on the Spit, the 2 Spoonbills still on Tern Island, and 40 Little Grebes, 6 Great Crested Grebes and 20 Tufted Duck on the Lagoon. (AH) 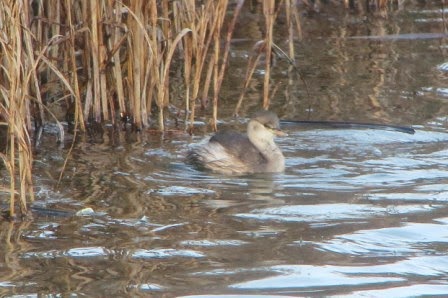 Little Grebe on Pagham Lagoon (AH)
Saturday, 8th November:  Another very blustery, overcast day, with frequent showers and the strong wind almost due south. After a slow start with rather little of note, most observers had drifted away, leaving just SH to hold the fort. Then a Balearic Shearwater and an increase in Gannets hinted at better things to come, just as he was thinking of leaving. I then arrived for a late start (after a bit of a session last night!), and after an update SH duly handed over the log and departed, feeling just a little uneasy and with a request to be informed if there were any developments. I settled in for a solo effort, but it was difficult to find shelter and by now with the tide getting high, spray from crashing waves was coming over the wall and making things impossible. There was nothing for it but to set the scope up in the car after finding a fairly sheltered spot. What followed was a fairly frantic few hours! Suddenly there was a dramatic increase in the rate of passing Gannets and Kittiwakes - both close in and further out - and at 1049hrs two close skuas lumbered just past the 'triangles'... both clearly juv Poms without a doubt. Game on. I quickly texted SH and other locals, but none could come immediately so out came the clicker to count Gannets whilst I tried to log everything else. I'd logged another two Poms before at last SH re-appeared; a quick update and as he watched from his van nearby, we hooted to each other each time a skua passed! There was a steady flow of birds until eventually the tide began to recede and we could watch from the wall again; by 1400hrs it had slowed considerably which was my cue to leave to fulfil domestic obligations. The tally by then was 22 Poms, 9 Bonxies, 2 skua sp, 660 Gannets and 310 Kittiwakes (the latter surely an under-estimate). Quite an interesting four hours! (OM). Two more Poms passed later (SH) 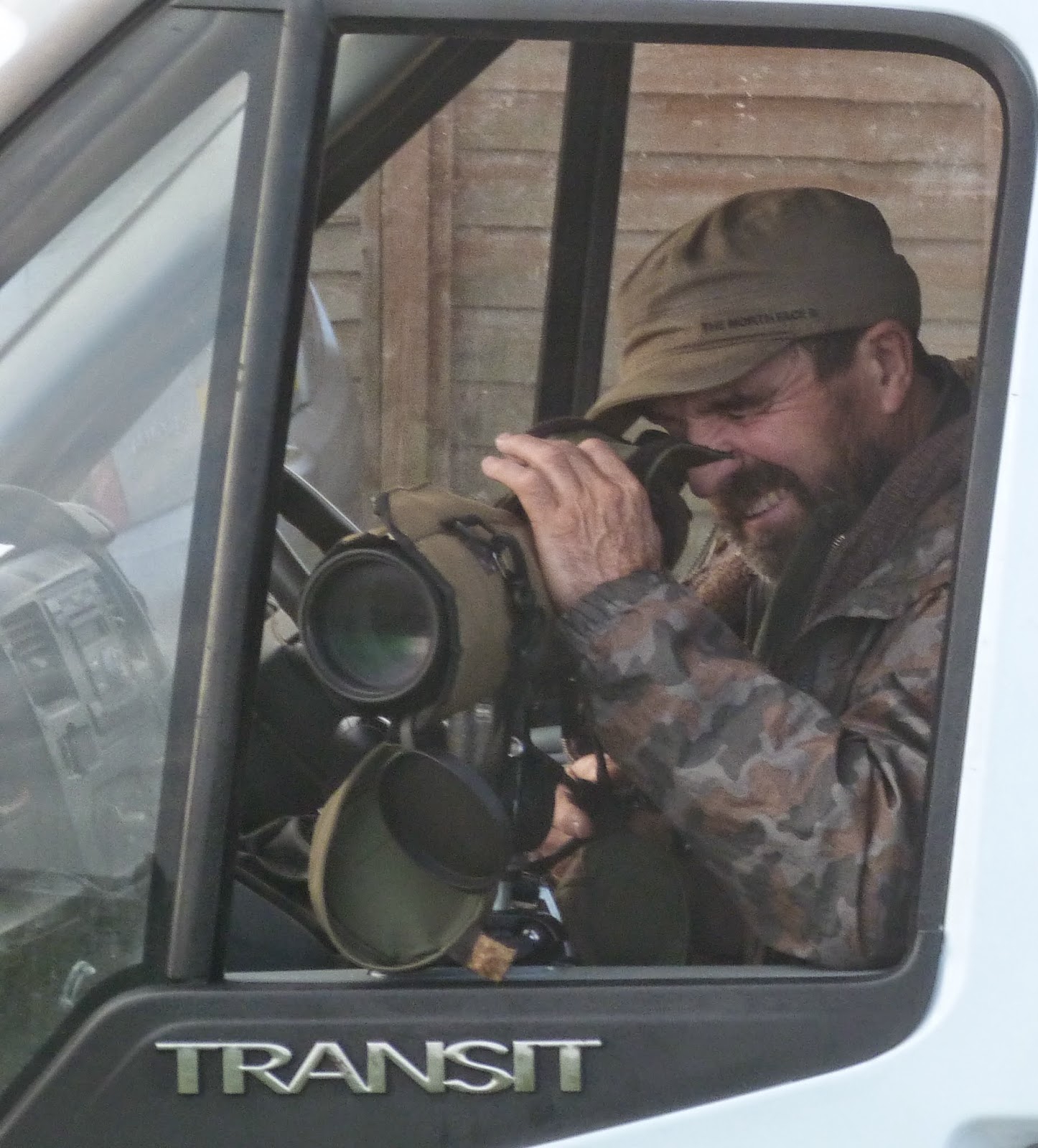 Medmerry: West Sands to the breach - There were two Great Northern Divers together on the big pool east of the breach, along with 2 Red-breasted Mergansers and 4 Grey Plovers. and nearby a Black Redstart was lurking under one of the westernmost caravans. (AH) 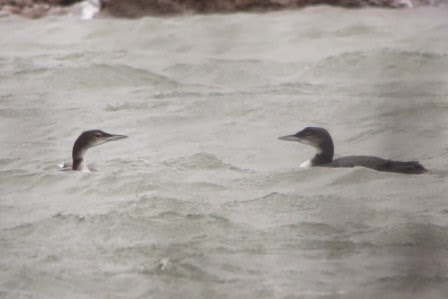 Great Northern Divers at Medmerry (AH)
Church Norton: The 2 Spoonbills were present again near Tern Island and there were 5 Red-breasted Mergansers roosting in the harbour, along with the Whimbrel and 40+ Grey Plovers. (AH) Ferry Pool: The only waders this morning were 36 Black-tailed Godwits, plus the usual 30+ Shoveler and 20+ Teal, and there were 50+ Wigeon on the field. (AH) During the high tide roost, counts (by IL) were as follows:

Up to 3 Green Sandpiper

East Head: A Snow Bunting reported in the dunes today. (per Birdguides)
Friday, 7th November: Dull and overcast with SW gales and heavy showers or longer periods of rain. Even so, yesterday's prediction proved to be correct and the first Little Auk was duly logged at the Bill at 07.27hrs this morning! (JA).
Further to my earlier editorial regarding queries received, a few more comments herewith........firstly Medmerry: In short there is no easy access route and it is a big site. I personally don't recommend the published walk from the Pagham Hbr Visitor centre as it's just too far unless you're a hiker. There is no circular walk you can do as you can't cross the breach (except perhaps at very low tide). Generally you either visit the east or west sides on a trip. The only access to the east side, excluding a long hike along the beach, is via the private Bunn's caravan sites and subject to restrictions at any time. On the west side, via Highleigh and Easton's Lane, there is a small public car park now open at Earnley, and a smaller one not yet open at Easton's.... but it is still a good walk from either. A site map is available at the Visitor Centre or via the EA; not reproduced here due to copyright issues, but hope this helps.
Secondly photo's: the editors are always grateful for these, but as readers will be aware we publish daily to keep the news current, which places a good deal of strain on deadlines, so ideally we need any pic's by early evening! Our blog is in diary form and of course some days and conditions are appalling for photography....... but even so we try to tell it like it is and although there are plenty of times when our pic's would not win any prizes, we are not concerned as it does at least manage to illustrate the day in question. In short, whilst we of course like good pic's, as long as it's free anything considered, but we need it promptly and don't take offence if we don't use it for whatever reason! Ok, enough of this for today and I'll deal with the last couple of issues soon. (OM).
On with today's bird news....... 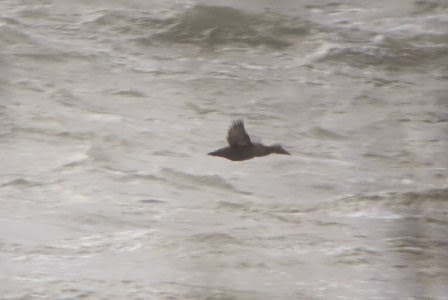 Eider past the Bill (AH)
Medmerry: West Sands to the breach - Early this morning a Little Auk appeared from the east, circled around the small bay created by the sea-defence rocks and departed back east again. (Given the timings this was quite likely to have been the same bird as the one reported from the Bill - see above .) Also the Great Northern Diver was still on the big pool, along with 12 Brent Geese, 4 Grey Plover, 20 Ringed Plover and 16 Dunlin. (BI/AH) 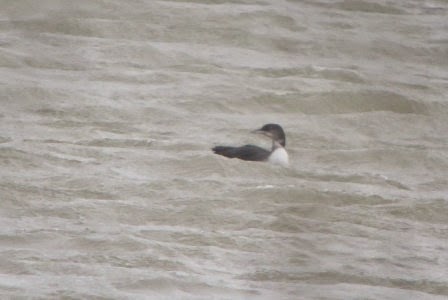 Great Northern Diver (above), Grey Plover and Dunlin and an indication of the conditions at Medmerry (AH) 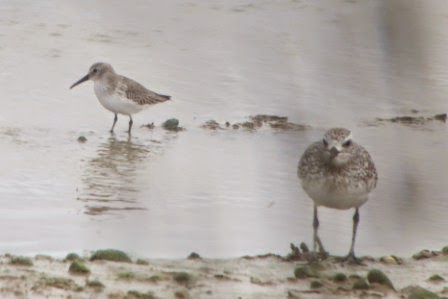 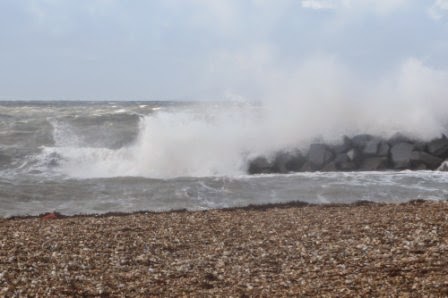 Church Norton: The two Spoonbills (which are actually both juveniles) were roosting in the harbour again, before decamping to Tern Island and then eventually to the other end of the harbour to roost (presumably) on the islands off the North Wall. Also a Merlin put on a bit of a show chasing a passerine around, high over the island and Pagham Spit, for several minutes before being lost from view. There were plenty of roosting waders present, including the Whimbrel, and at least 6 Great Crested Grebes were in the harbour. (AH/BI) 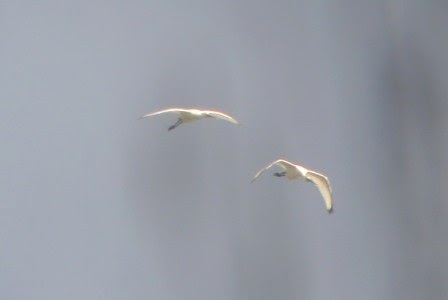 Spoonbills over the harbour (AH) 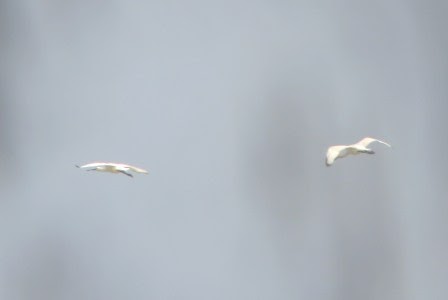 Ferry Pool: There were 16 roosting Avocets this morning, along with 8 Black-tailed Godwits and 25 Redshank. Around 30 Golden Plovers dropped onto the grass to join the Lapwings, and there was a flock of at least 60 Stock Doves tucked away at the back of the field. (AH) 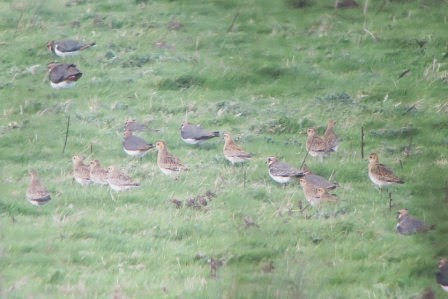 Golden Plover and Lapwing on Ferry Field (AH)
Posted by Birderowen at 09:15