Saturday, 27th June: A warm, sunny and summery day with a moderate westerly coastal breeze and the prospect of cloudier conditions later...

Ferry Pool: An early visit (0630) found the two s/plum Spotted Redshanks showing well but being harassed by the Avocets, whilst the Barn Owl was busy hunting the fields. Nearby the
first returning Sand Martin was seen towards the northern edge of Selsey (SH).

Later on, there were three summer-plumaged Spotted Redshanks, 127 Black-tailed Godwits, 80 Redshank, 16 Avocets, including seven juveniles, six Teal on the pool, plus the Shelduck family and a Pied Wagtail.
Also the Barn Owl was sat in the hedge taking a breather  from hunting, and there were still several singing Chiffchaffs and Blackcaps around, but the Nightingales were being elusive.(AH) 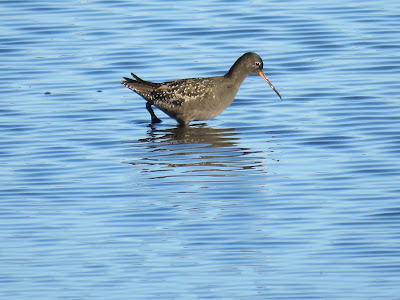 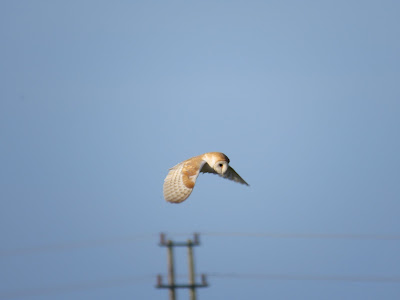 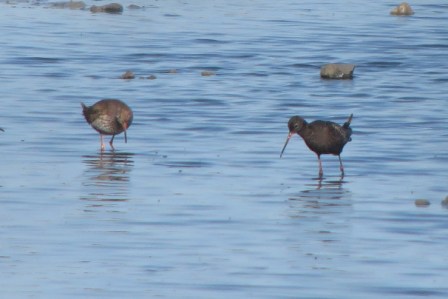 Spotted Redshank and Redshank (above), Barn Owl, Chiffchaff & Blackcap around the Ferry (AH) 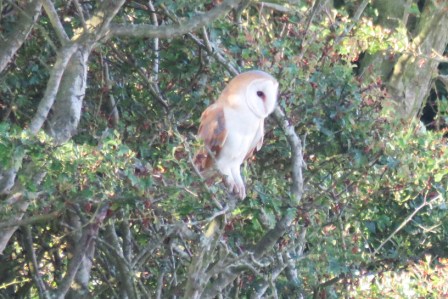 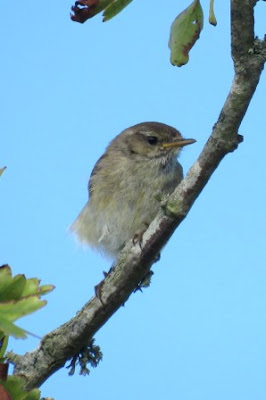 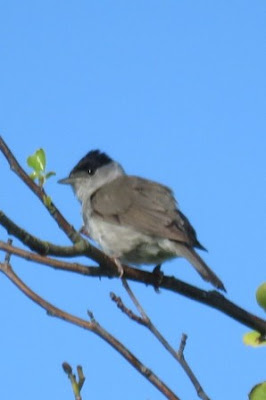 Church Norton: The Hudsonian Whimbrel was showing well this morning along the west side as the tide dropped. The 'leucistic' Curlew was back in the harbour and there were also two or three Whimbrel, at least a dozen each of Curlew, Turnstone, Dunlin and Ringed Plover, plus about eight each of Common and Sandwich Tern and four Little Terns. There were also four Sand Martins over mid morning.(AH/IP) 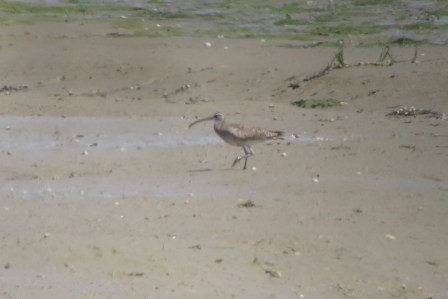 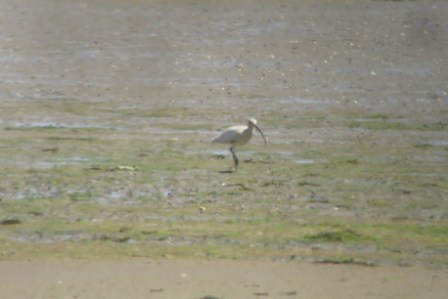 Medmerry: Easton Lane to Stilt Pool - At 10.45am from the track just next to the poplars at Easton and Grange rifes, a Honey Buzzard appeared overhead and circled over at moderate height SE or ESE, gaining height and essentially heading for Selsey. It appeared to come from Earnley. Most likely female (brown backed rather than grey).
There were also six Avocet broods at various stages present this morning, and four or five noisy Little Ringed Plovers. (PH)

Park Farm, Selsey: A pair of Grey Partridge were sat in the rough ground beside the Park Farm reservoir early on, and there was the first big movement of Swifts and hirundines this morning over the fields from Park Farm, with over 100 Swifts feeding overhead, together with 30+ House Martins, 20+ Swallows and 2 Sand Martins. (IP)

Long Pool/West Side: Still plenty of Reed and Sedge Warbler activity, plus at leas six singing male Reed Buntings this morning and several Common Terns feeding in the pool and rifes, whilst a Jay went over north. Along the west side there was a family of at least three Lesser Whitethroats moving through the gorse and also several Skylarks. (AH) 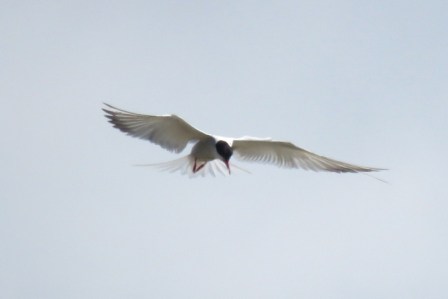 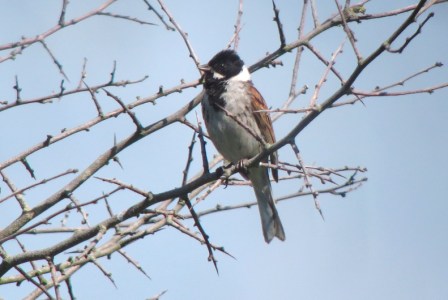 Church Norton: The Hudsonian Whimbrel was reported again several times from near the Hide area just after noon (per RBA).

Ferry Pool area: The two Spotted Redshanks were on the pool early on, along with a Greenshank, a Green Sandpiper, 16 Avocets, including the four juveniles, seven Teal, a dozen Redshank, and a handful of Black-tailed Godwits. Later on, most of the other birds had moved on, but Godwit numbers had risen to over a hundred. (AH/SR)
An adult Nightingale was gathering food and another could be heard in the hedgerow, but the young were keeping hidden. Also a Green Woodpecker, Cuckoo, a Kestrel, a Blackcap, two Red-legged Partridges, a Song Thrush and two families of Whitethroat were around the Tramway area. (SR). 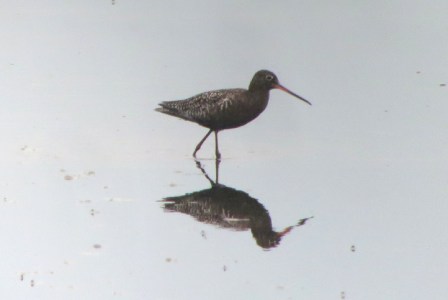 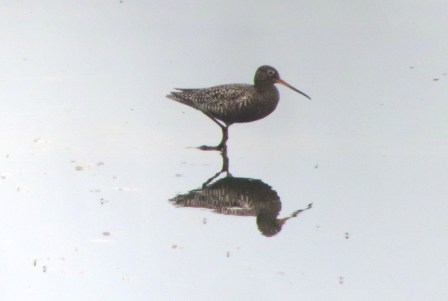 Spotted Redshank (above) & Teal on the Ferry (AH) 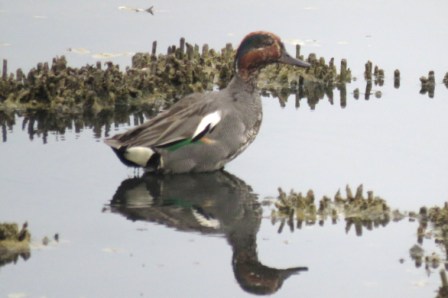 Medmerry: Easton Lane to the Stilt Pool - Most unusual bird of the morning was a Nuthatch, which flew right across the open fields to the west and up onto the trunk of one of the poplars near Easton Farm. Unfortunately I lost it, trying to get a picture of it, but it might well still be there.
Other than that it was pretty standard midsummer fare - there were at least 20 adult and 10 young Avocets on the Stilt Pool, three or four Little Ringed Plovers and similar of Black-tailed Godwit and Redshank were the only waders seen, and there were plenty of Skylarks, Linnets, Whitethroats about, plus a few Yellowhammers and Meadow Pipits. Offshore there were two Sandwich Terns east and a Common Tern west, and there were also half a dozen Lesser Black-backed Gulls on the reserve and at least 20 Stock Doves in the area, plus a juvenile Little Grebe on the pool near Marsh Barn. (AH) 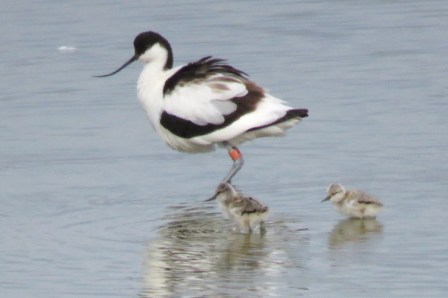 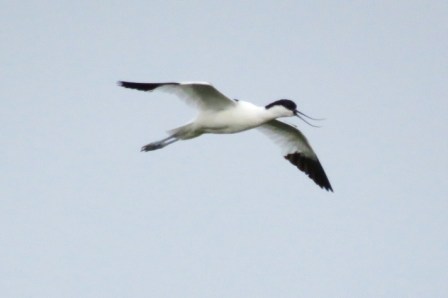 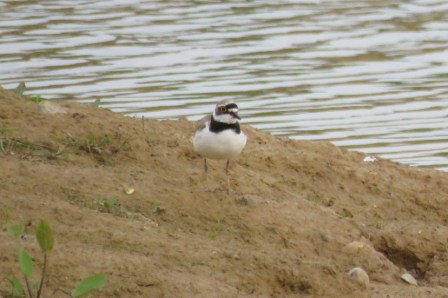 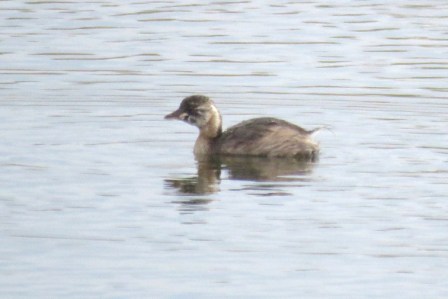 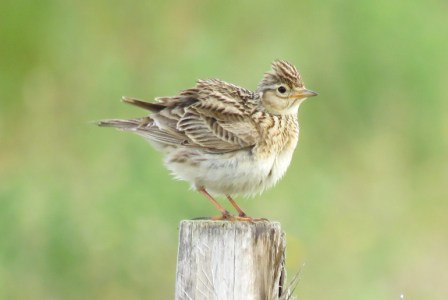 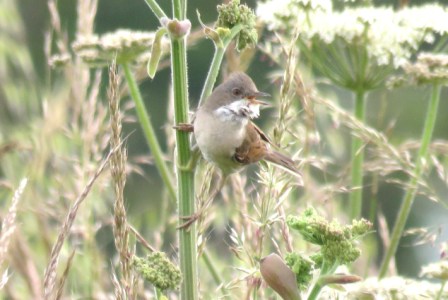 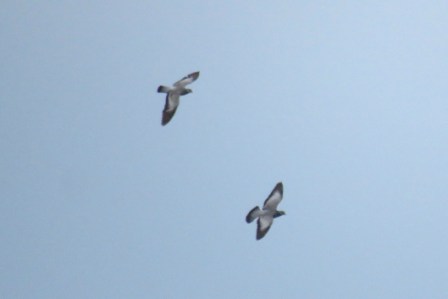 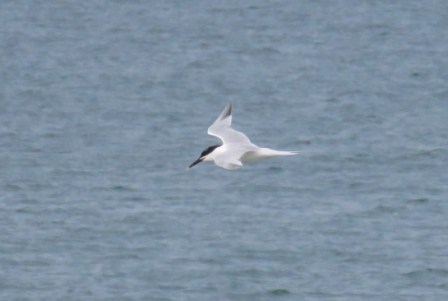 North Wall:  A Cuckoo was calling at Welbourne, whilst on the Breech Pool 6 Tufted Ducks, 23 Mallard and 2 roosting Little Egrets. Reed Warblers were busily feeding young all along the Wall and along Pagham Rife. The Swans on the Rife were very uncomfortable with a visiting Cormorant. Two pairs of Lapwing and one of Oystercatchers have successfully bred in a maize field adjacent to the Rife and the Oystercatchers were instantly in the air when a Buzzard flew over. Just a single Tufted Duck on Honer Reservoir but there were 2 pairs of Skylarks there and a lone Pied Wagtail. Singing Linnets, Yellowhammers and Whitethroats in that area. Nearly all of the fields are planted in maize but in the set aside areas Oxeye Daisies have appeared in great numbers. Around 40 Jackdaws, half of which were juveniles, feeding on the mud at Owl Water. Juvenile Little Egrets attempting their first flights with several stranded in the top of bushes. (JDW) 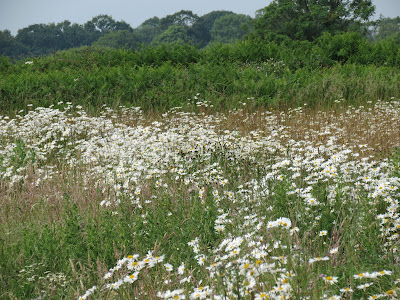 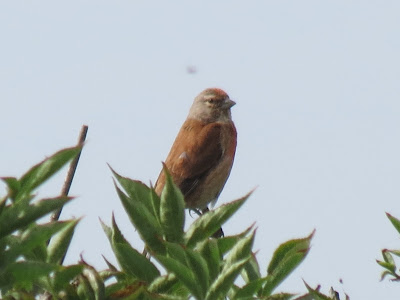 Thursday, 25th June: Dry, with sunshine and cloud and a light to moderate SW breeze.

Church Norton: No reports of the Hudsonian Whimbrel by mid-afternoon....although a belated evening report (per RBA) indicates it was still present in the morning at 0930. 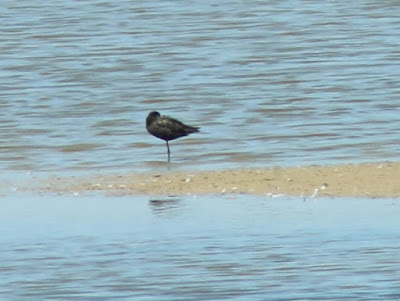 Long Pool: The usual Whitethroats, Reed Warblers and Reed Bunting were present, plus the pair of Little Grebes with young and Great Crested Grebes with 2 young (C&ME). 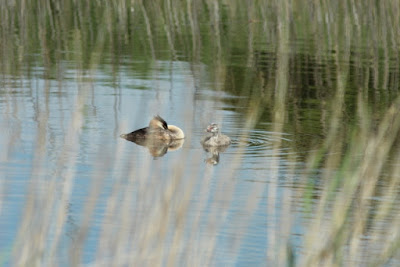 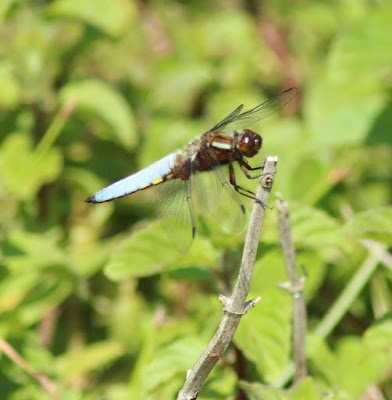 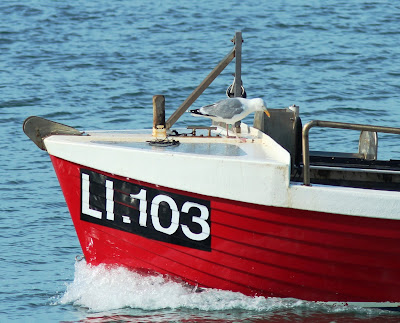 Sneaky Herring Gull on the lookout, having hitched a ride, on a quiet morning at the Bill (CE)
Posted by Birderowen at 09:28