Selsey: Park Farm - The Green Sandpiper that over-wintered last year appears to be back for another winter, and there was also a single Redwing here and a Grey Wagtail on the roofs. (IP/S&SaH)

Church Norton: A flock of over 50 Goldcrests was at the western edge of the Oak Copse (Bluebell Wood) though there was nothing else with them. There was a pair of Stonechats at the first Several, and a Merlin flew across the harbour heading towards Pagham, whilst an adult Peregrine was sat on its usual island in the Harbour. (IP)
Lots of Goldcrests around today with 20+ at the first Severals. There was a Rock Pipit on the beach and the Dartford Warbler showed briefly a few times in the gorse bushes by the second Severals  (S&SaH) 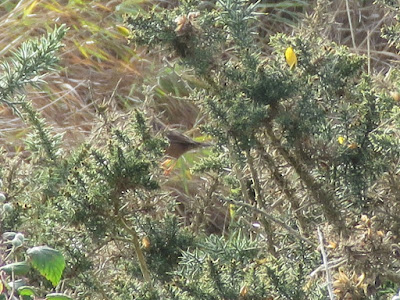 Dartford Warbler (well part of it!) at the Severals and a Grey Wagtail (!) at Park Farm (SH) 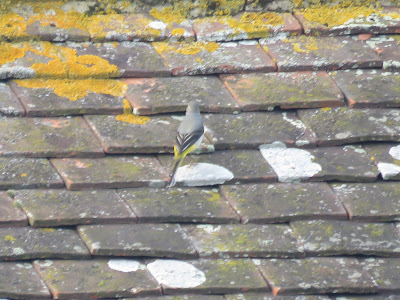 Medmerry: Breach viewpoint -  There were four Black Redstarts present in the area today; two on the rocks near the viewpoint and two more around the end caravans with a few Pied Wagtails. Two Wheatears were on the area of rough ground plus a flock of Linnets and a few Meadow Pipits (BI). 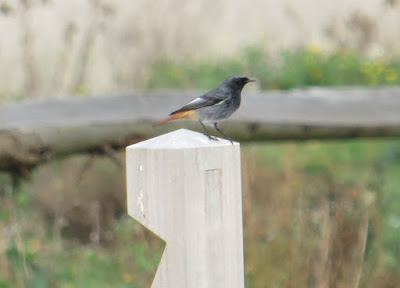 Easton Lane to the Stilt Pool - Pretty quiet this afternoon; highlights were a few Yellowhammers, two Stonechats, two Buzzards, and best of all, two Spotted Redshanks opposite the Stilt Pool. (S&SaH) 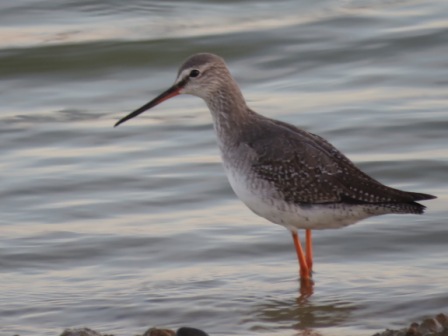 Friday, 30th October: Overcast and rather gloomy, with a strong SSE wind and light to moderate rain through the morning..... gradually becoming drier by afternoon.

Ferry Pool: Three Green Sandpipers, 60 Lapwing and several Avocets were present this morning together with the usual Teal and Shoveler (sorry AH, rest of your voicemail message was not discernable!)

Church Norton: The Whimbrel was still in the harbour and a few Goldcrests were along the hedgerows. The churchyard was quiet with just a couple of Goldcrests about, a Kingfisher was zooming about over the high tide and a few Reed Buntings were by the Severals. Plenty of commoner waders in the roosts and in the harbour Teal, Wigeon, Brent Geese and a Great Crested Grebe (AH/BI) 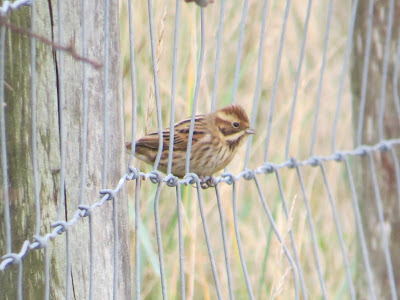 Pagham churchyard: I spent a good while following a flock (or was it two flocks) of 15 Long-tailed Tits, which was accompanied by a good number of hangers-on, which included 4 Chiffchaffs and at least 10 Goldcrests with Blue and Great Tits thrown in. It looked promising for something rarer to be with them, but if it was there I failed to find it! Also present were a couple of Jays and a Green Woodpecker (OM).

Pagham Lagoon: This afternoon a Slavonian Grebe and two Pochards were on the lagoon,  while further along on Pagham Spit there were three Wheatears, two Rock Pipits, 10 Skylarks and say 150 each of Greenfinch and Linnet, sometimes flying around in a great swarm. It was high tide and on Tern Island, among the Curlew, the leucistic bird was present. (ARK per SOS)

Medmerry: Breach - Around the rubble area near the breach this morning were two Black Redstarts, 50 Meadow Pipits, 50 Linnets and a Wheatear, plus a large flock of Starlings and a Kestrel. On the sea defence rocks were three Rock Pipits and the two Bar headed Geese were with the Canada  Geese viewed towards Ham Farm from the viewpoint. (BI) 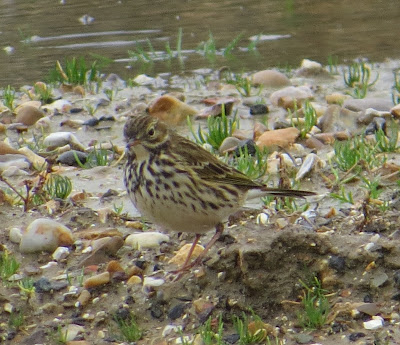 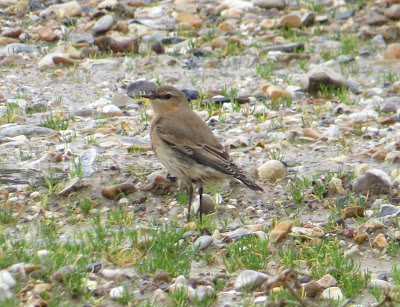 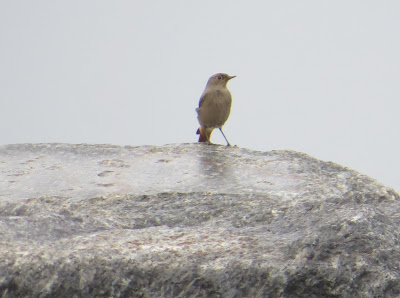 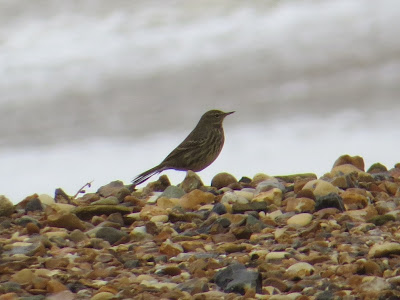 Thursday, 29th October: A grey and breezy day, dry at first but with blustery squalls by mid-morning driven on by the strong south-south-easterly wind.....

Selsey Bill (0730-1030hrs): The unexpected star bird of the day was a Snow Bunting that was on the bank and the beach by the 'South-east' wall, at times coming within a few feet of observers, before hopping up on the wall and disappearing, to the frustration of late-comers.
Otherwise there was little to report - there was a Rock Pipit and a few Pied Wagtails about the beach, flocks of c50 Linnets and c30 Goldfinches came and went several times, but were clearly not moving far, whilst offshore the only thing in evidence was a trickle of Gannets west. (AH/OM/PC et al) Log below.....
Gannet - 5E, 12W
Shag - 4E
Brent Goose - 3W
Mediterranean Gull - 1E
Chiffchaff - 1 gardens
Goldcrest - 2 gardens
Pied Wagtail - 8 area
Goldfinch - c.30 area
Linnet - c.50 area
Snow Bunting - 1 ob
Also... late news of a Little Auk offshore early this morning, which then flew W (GH, per his blog) 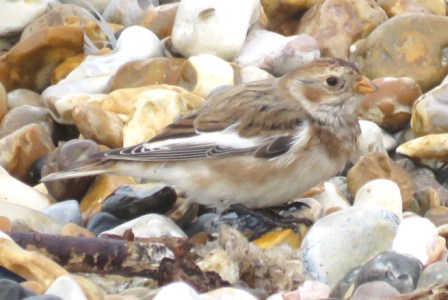 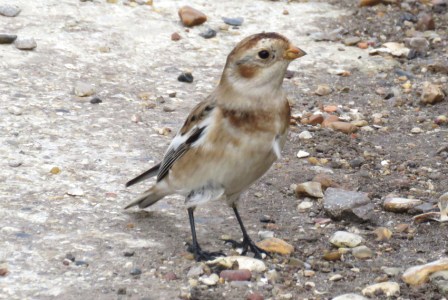 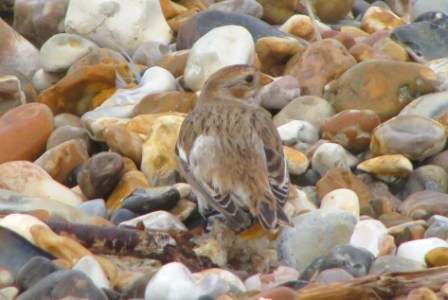 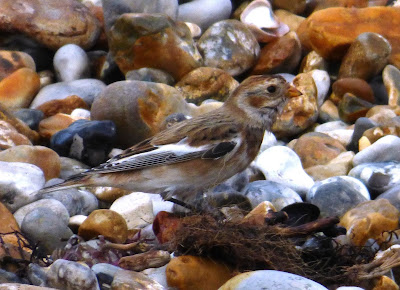 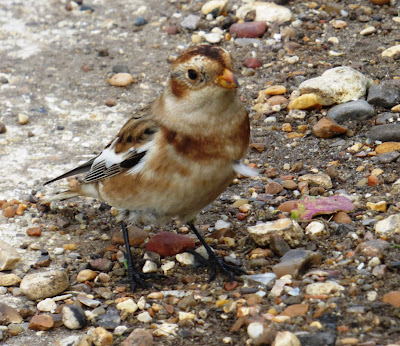 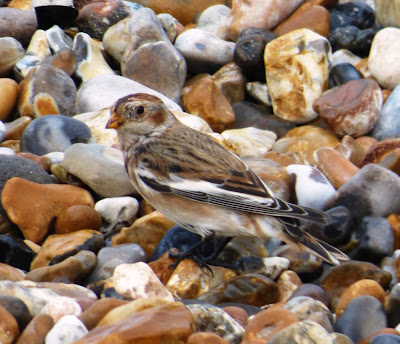 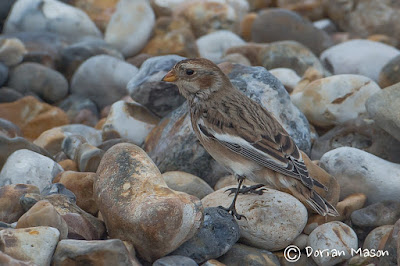 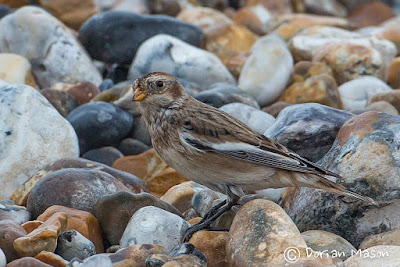 Medmerry: Breach - There were three Black Redstarts, six Meadow Pipits, a Wren, a Wheatear and a flock of Linnets around the rubble piles just before the Breach this morning. (BI).
Our visit to the Breach proved birdless, but a walk from Chainbridge to the Ham viewpoint produced 31 Golden Plover, 4 Stonechats and  a ring-tailed Hen Harrier battling the strong winds; no sign of the Great Grey Shrike however (BFF/DIS/DM). 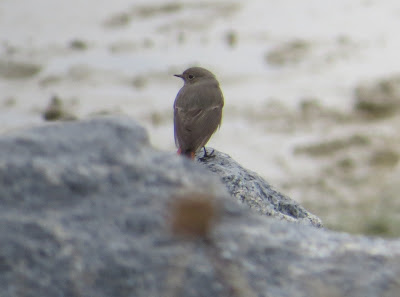 Black Redstart (above) and Wheatear at Medmerry (BI) 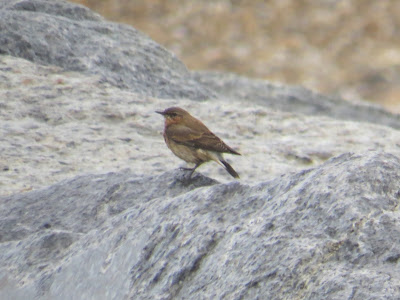 Selsey: Coastguard Station - Another Black Redstart was on the house/around the gardens here this morning. (BI)
East Beach - there were 4 Chiffchaffs and 6 Goldcrests present this morning. (OM)

Ferry Pool: The Little Stint was present again this morning, among a reasonable selection of waders. A Spotted Redshank was in Ferry Channel early on, whilst later two were on the pool, along with five Snipe, two Green Sandpipers, twelve Avocets, ten Dunlin, 25 Redshank, 35 Black-tailed Godwits and c80 Lapwing, with similar of the latter on the adjacent cropped field. There were also 50+ Wigeon and Teal, up to 20 Shoveler and four Shelduck present. (AH/OM) 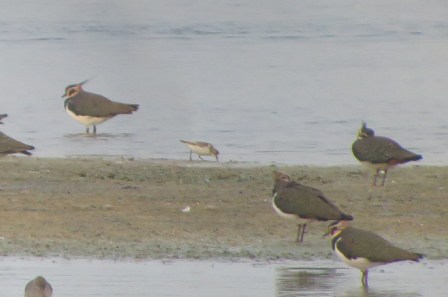 Little Stint with Lapwings, Lapwings & Snipe around the Ferry (AH) 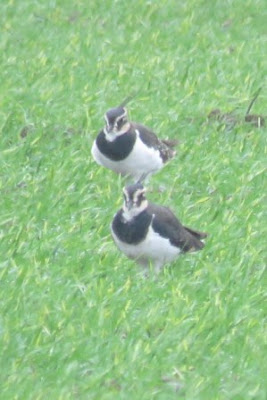 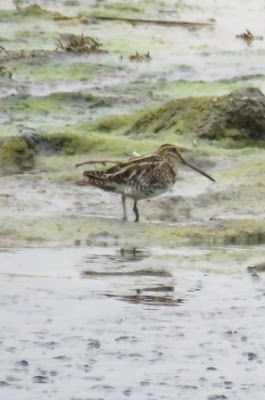 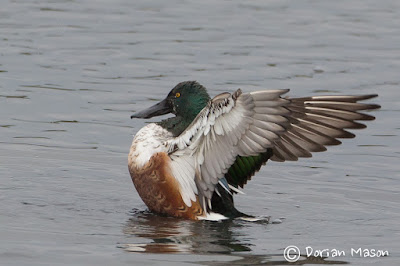 Church Norton: Not much to report - there were no Black Redstarts about this morning, with just a couple of Blackcaps and Jays, plus a few Goldcrests about the churchyard area, whilst in the harbour the Whimbrel was present along with plenty of Grey Plovers, Dunlin, Curlews and Redshank, plus a Pintail and 50 or so Brent Geese. (AH/BI)

The oak wood at Church Norton was nigh on deserted of avian life today, and with the onset of rain we sheltered in the hide, noting a few Knot, 3 Bar-tailed Godwits and a single Whimbrel  with the usual suspects, though there was not much else except a single Kingfisher. (BFF/DM/DIS)

Pagham churchyard: No sign again of any Black Redstarts here, but two Chiffchaffs and c.10 Goldcrests were present, plus a Green Woodpecker pecking the (wooden?) tiles of the spire! (OM)