Friday, 19th May: Another fairly pleasant morning, after a chilly and grey start, with the westerly breeze persisting, but with plenty of sunshine to be had..... 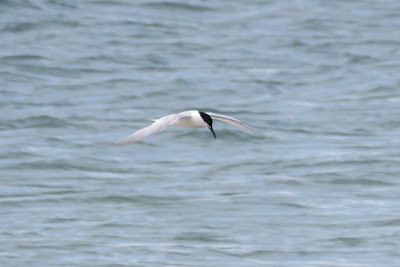 Sandwich Tern at the Bill (AH)

Ferry Pool: An unusually large Knot provoked some interest and discussion, though it was most likely simply just that. Also present were 135 Black-tailed Godwits, four Redshank and four Shelduck, plus the regular noisy Cetti's Warbler and Whitethroat. (AH/JA/BI et al) 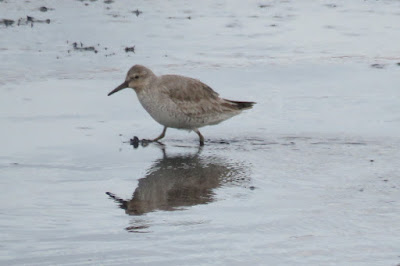 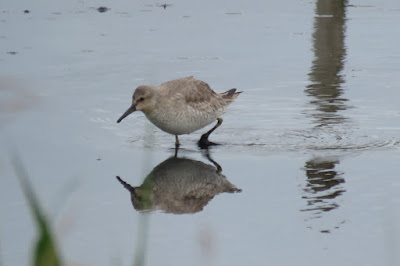 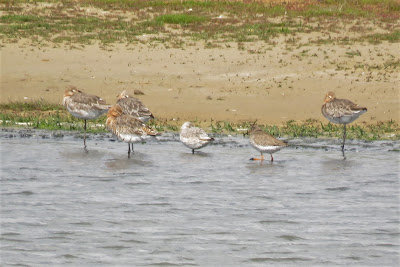 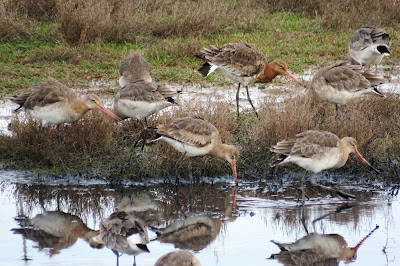 Church Norton: A first-summer Little Gull dropped in on the harbour for five minutes before heading off east, and the presence of a Whimbrel in the harbour and a Willow Warbler in the hedge by the concrete wall suggested a little bit of migration.
Otherwise there was a Curlew and a dozen each of Dunlin and Ringed Plover in the harbour, and plenty of tern activity. Also, three Sparrowhawks were up over the Priory, one or two Sedge Warblers and Reed Buntings were along the Severals, and there were a number of Painted Ladies on the wing. (AH/BI/CRJ)
The electric fences are finally fully up on Tern Island, and a count of nests produced 40  of Sandwich Tern - by far the highest recorded in the harbour - and 281 of Black-headed Gull, though the Little and Common Terns had no gone down yet. (IL) 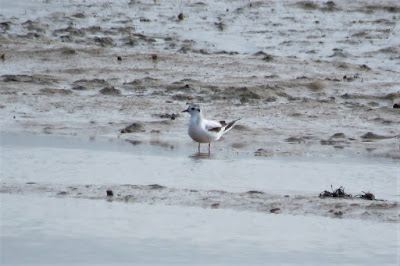 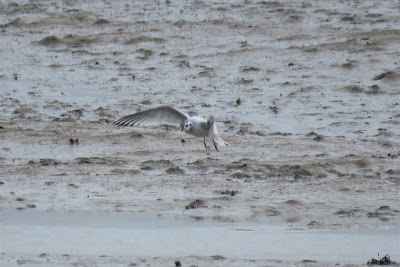 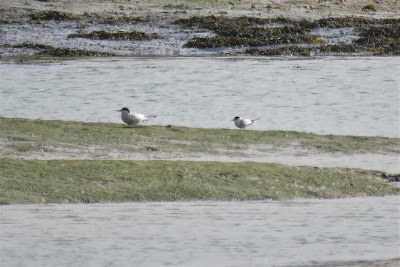 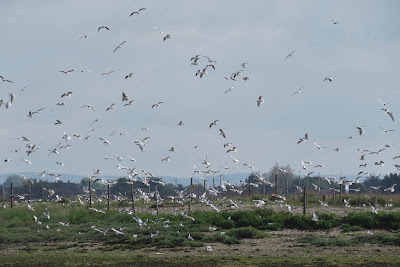 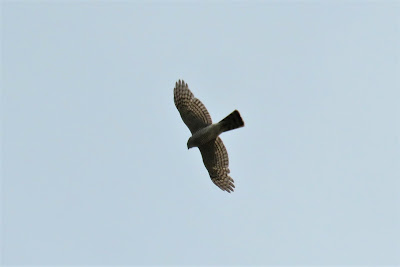 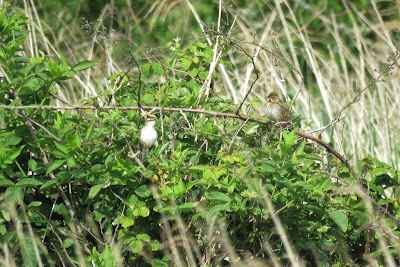 North Wall: A Spotted Flycatcher was in the hedge by the stables this morning. (PC)

Medmerry: Porthole Farm - Each of the three so-far uncropped fields around the buildings seemed to hold a pair of Lapwings this evening, and two pairs of Whitethroats were busy carrying food along the hedges, whilst over the settling tanks there was a big flock of c500 Swallows, c200 Hpuse Martins and c50 Swifts. (AH) 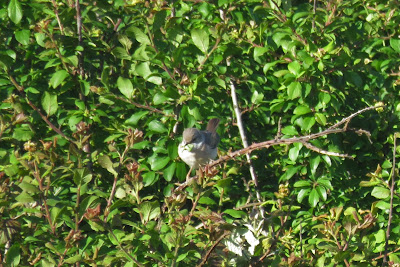 Whitethroat (above) & House Martins and Swallows at Porthole Farm (AH) 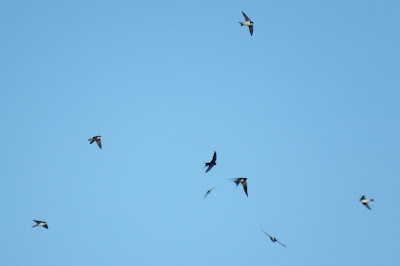 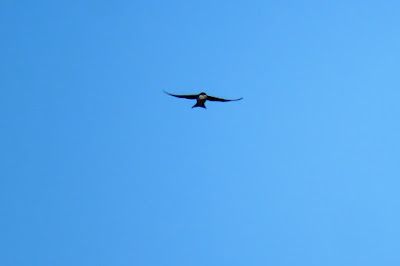 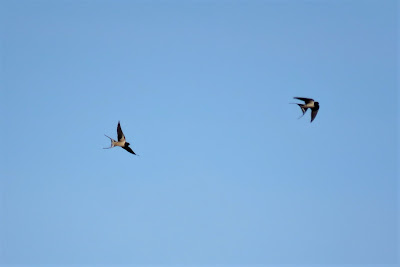 Thursday, 18th May: A fairly pleasant, mild morning, with a modest westerly breeze and a mix of sunshine and cloud.....

Ferry Pool: There were just six Black-tailed Godwits, two Redshank and two Shelduck on the pool this morning, and two Swifts went over west. (AH)

Medmerry: Easton Lane to the Stilt Pool - It was generally very quiet this morning, though there were two or three Reed Warblers in the ditches and several Yellowhammers, Whitethroats and a Reed Bunting along the banks, plus a few Swallows over, a handful of Stock Doves and lots of Skylarks.
There were at least five Avocet families on the Stilt Pool, though the adults all seemed very agitated, constantly flying up and chasing each other off. the only other waders present were a couple of Little Ringed Plovers and a lone Black-tailed Godwit, and not to much else of note, besides a couple of pairs of Gadwall. (AH) 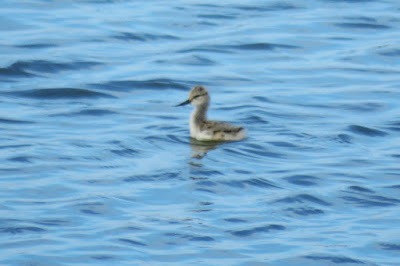 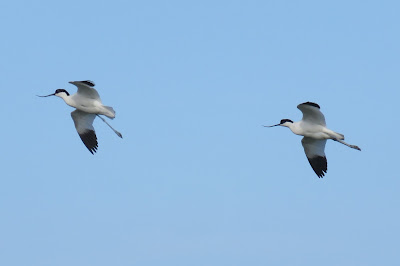 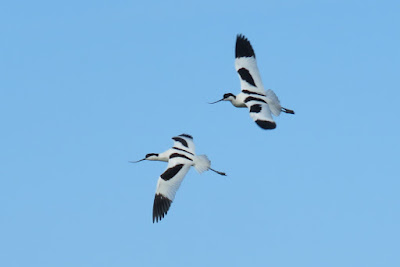 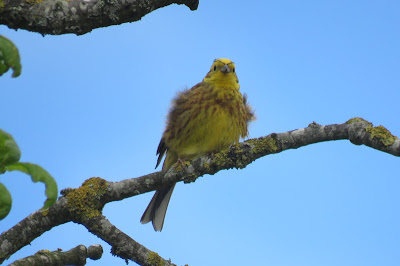 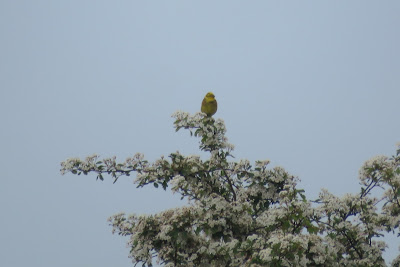 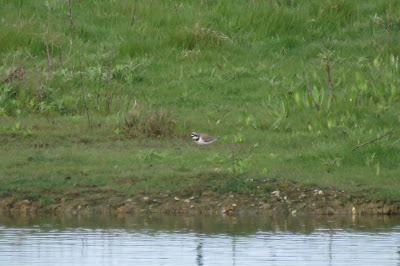 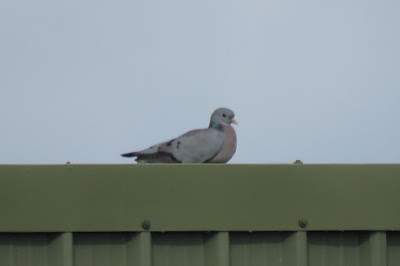 Wednesday, 17th May: A very muggy and still day, with fairly persistent drizzly rain under leaden skies and the odd rumble of thunder.....

Selsey Bill: An Arctic Skua went through east, plus the usual scattering of Gannets and terns, but generally it was very quiet. Full log below. (CRJ/C&ME/SR) 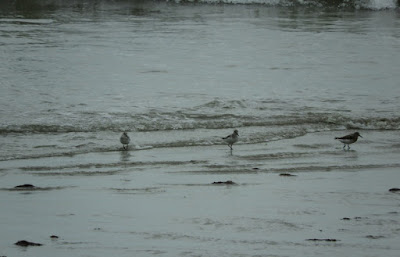 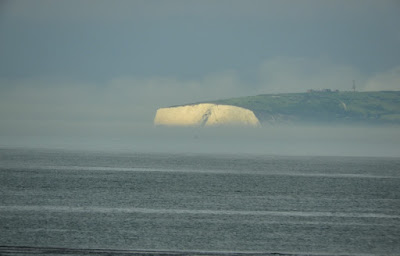 Medmerry: Breach area - A Red Kite flew high over the breach area this afternoon, and a Short0-eared Owl was hunting on the reserve near the old red-brick building, where one was seen a couple of weeks ago. (BO'D) 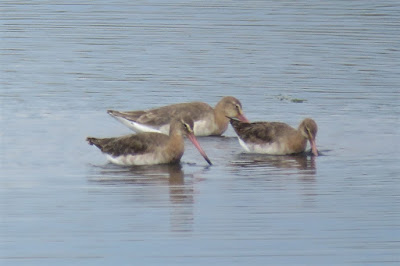 Church Norton: A Spotted Flycatcher (presumably yesterday's elusive bird) was in the churchyard, along with the long-staying, and hopefully breeding, Firecrest this morning. There were also the regular Blackcap, a couple of Chiffchaffs and Whitethroats, plus the Cuckoo in the vicinity, with several singing Sedge Warblers and a Reed Bunting along the front of the Severals.
The Little, Common and Sandwich Terns were busy in the harbour and offshore, but the only waders noted were a dozen Ringed Plovers. (AH) 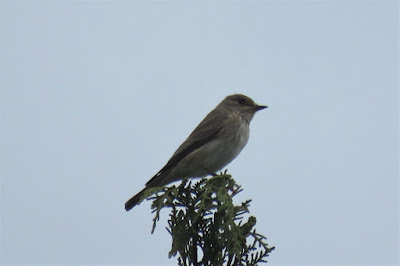 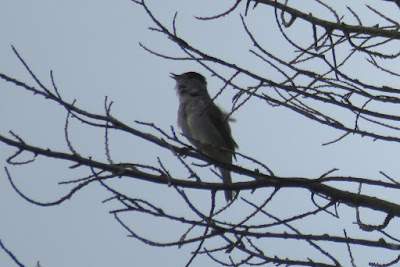 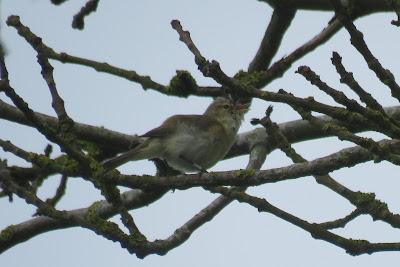 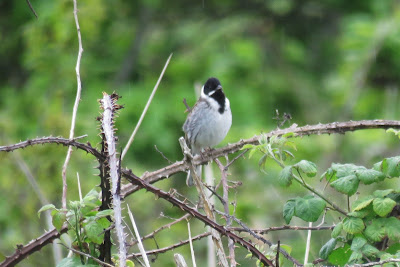 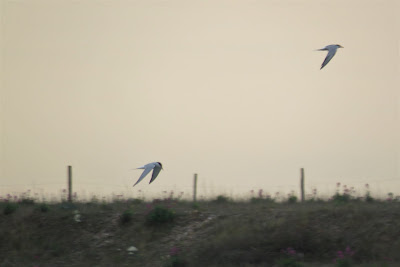