Thursday, 25th January: A much more pleasant day, with a moderate westerly breeze and quite warm in the sunny spells....

Ferry Pool: The pool was bereft of birds, save two Shelduck, whilst the creek in the field held ten Shovelers, c50 Teal and c200 Wigeon. (AH) 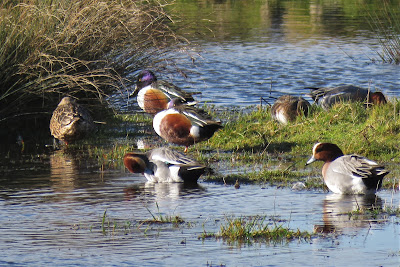 Shovelers and Wigeon on the Ferry (AH)

Honer Reservoir: The Long-tailed Duck was on the reservoir again this morning. (AH) 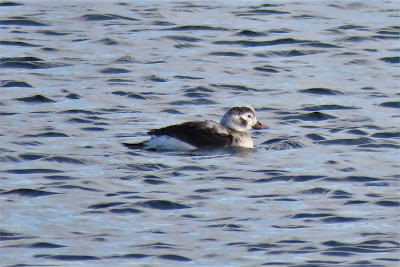 North Wall: There were seven Ruff in White's Creek this morning, along with plenty of Redshank and Lapwing, but only a dozen or so Black-tailed Godwits, whilst the waterlogged fields behind the Breech Pool only held 55 feeding Curlews and a few Wigeon and the bushes were more or less empty, except for a couple of Reed Buntings.
There were c800 Brent Geese on the golf course by the Slipe Field, and at least 200 Linnets, plus a Kestrel were also present there. (AH/PC/IH) 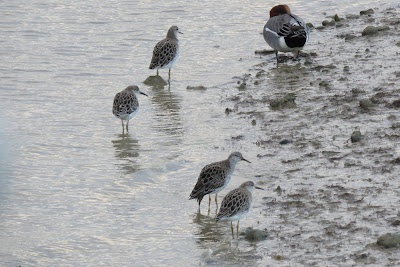 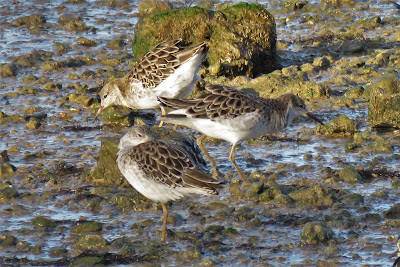 Ruff (above), Curlews & Brent Geese around the North Wall (AH) 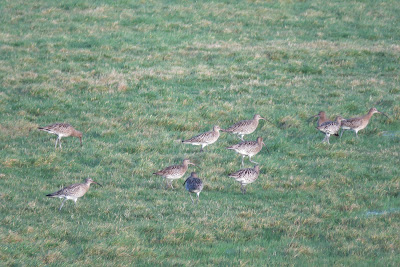 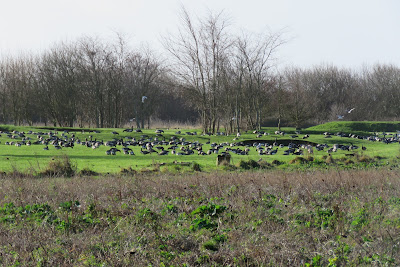 Pagham Lagoon and Spit: The Red-necked Grebe was showing nicely from the spit this morning, and further into the harbour there were three Goldeneye, two Red-breasted Mergansers and the female Eider on the water, and one of the Peregrines was on its island.
The Lagoon has held very few birds this winter - especially Little Grebes, which are normally quite numerous - and this morning was no exception, with just a couple of pairs present, along with nine Pochard and 20 Tufted Ducks. (AH/TG) 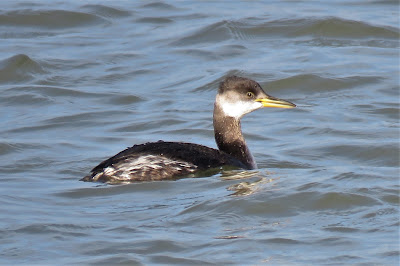 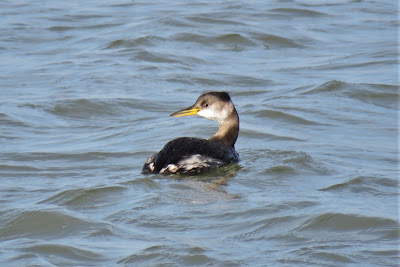 Red-necked Grebe (above), Eider & Red-breasted Merganser from the spit & Pochards on the lagoon (AH) 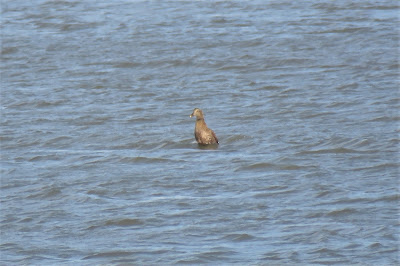 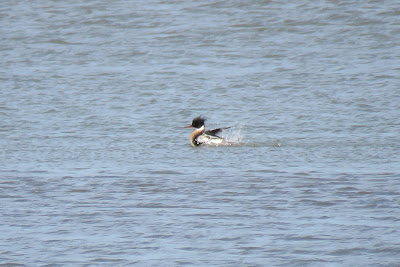 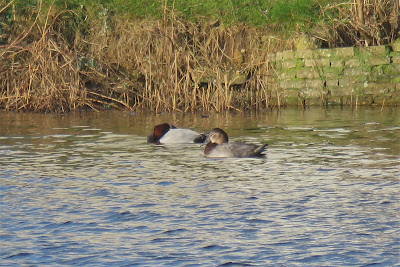 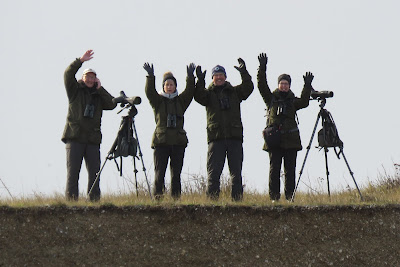 The Eameses and the Moores celebrating with a Mexican wave after seeing the Red-necked Grebe! (AH)
East Head: With the prospect of a little sunshine and less wind, we headed to East Head this morning, checking out the Brent flock without finding any interlopers! Not much was in the main channel as it was a low tide, but at the northern tip of the Head we spent an hour scanning the open channels. This produced a single Great Northern Diver, 20 Red-breasted Mergansers 20 Great Crested Grebes and a single Slavonian Grebe, whilst 3 Sandwich Terns flew west.  We managed a massive count of 287 Bar-tailed Godwits feeding at low tide on Pilsey Sands opposite, and in the dune slack were 45 Skylarks, 30 Meadow Pipits and 2 Stonechats. (BFF/DM)

Late news today of a second-winter Glaucous Gull that was seen on Friday (19th) on the shingle off of the harbour mouth for around 30 minutes from 1pm, which then flew off west. (P. Curnick via SOS) 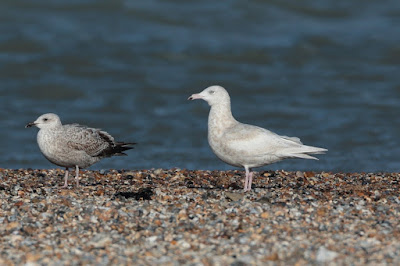 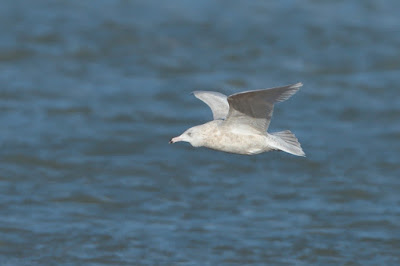 Pagham Lagoon and Spit: The Red-necked Grebe was just inside the harbour on the high tide in company with two Great Crested Grebes. On the Spit there were two Skylarks, a Sparrowhawk and a Green Woodpecker, whilst on the Lagoon there were two Red-breasted Mergansers, six Pochard and 27 Tufted Ducks. (JDW)

Honer Reservoir: The Long-tailed Duck was on the reservoir again this afternoon, along with a Tufted Duck and three Coots, with a Reed Bunting along the hedge, whilst 40 Grey Plovers and c200 Dunlin flew over from the harbour. (AB/IL) 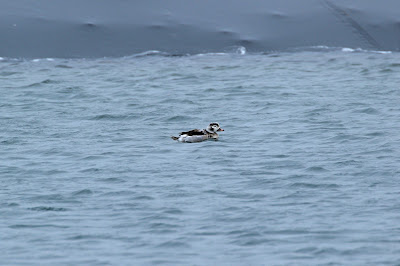 
Ferry Pool: The Spotted Redshank was in Ferry Channel early on. (TG-P)
Later on, there were two Shelducks, c50 Teal and c200 Lapwing on the pool, with c100 Wigeon and a few Canada Geese on the field. (AH) 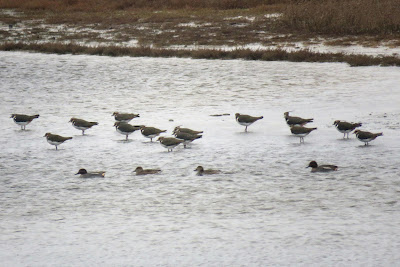 Lapwings and Teal on the Ferry (AH)

Church Norton: There was nothing much about beyond the regular waders, around 1000 Brent Geese before they departed and a couple of Red-breasted Mergansers and 50 Wigeon in the harbour, and a couple of Goldcrests among c25 Long-tailed Tits along the sheltered hedges. Also, a Sparrowhawk and a dozen Red-legged Partridges were along Rectory Lane. (AH) 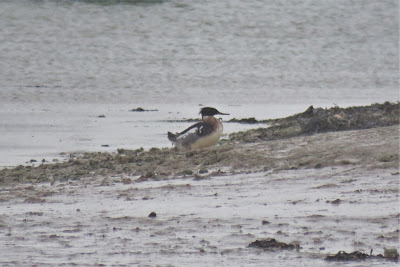 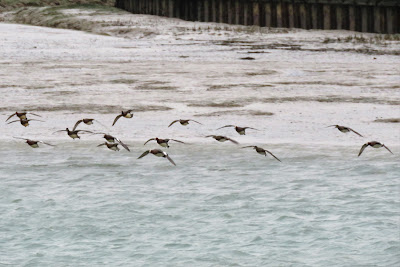 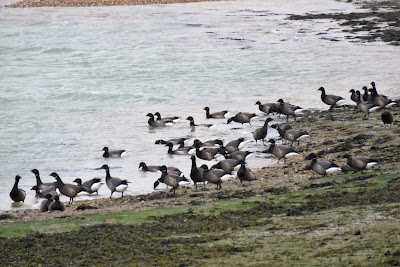 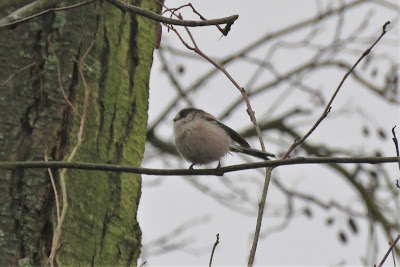 Tuesday, 23rd January: Yet another damp, drizzly and blustery day under leaden skies, though a little milder than of late....

Ferry Pool: There were c600 Lapwing, c200 Wigeon, c80 Teal, eight Shoveler and 12 Canada Geese around the pool and field this morning. (AH)

Sidlesham Churchyard: The two Coal Tits were around the feeder in the garden near to the gate again this morning. (AH) 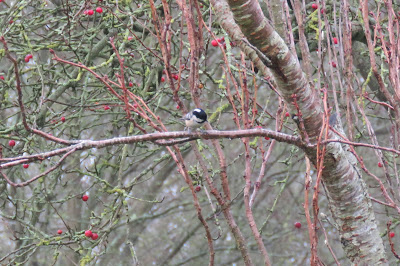 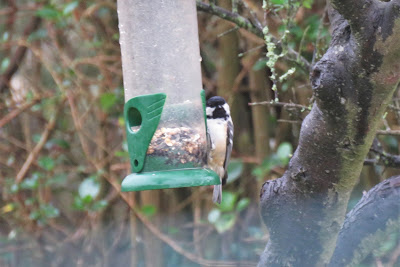 Church Norton: There was not much out of the ordinary in a fairly quick look, though the Whimbrel, three or four Bar-tailed Godwits and c60 Knot were among the many Grey Plovers and Dunlin, whilst there were also a Red-breasted Merganser and c400 Brent Geese out in the harbour, but small birds were non-existent. (AH) 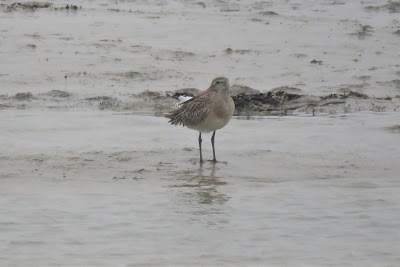 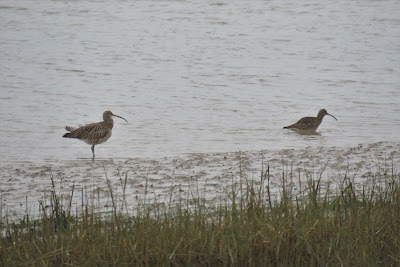 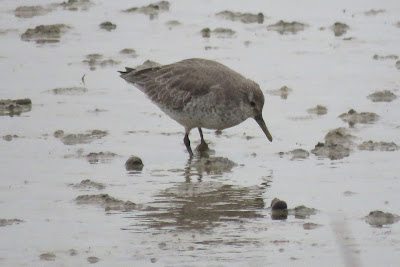 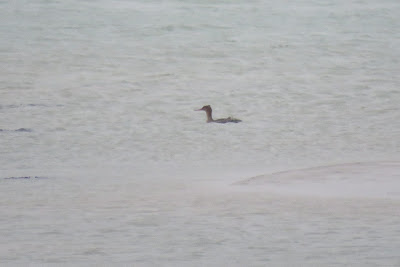 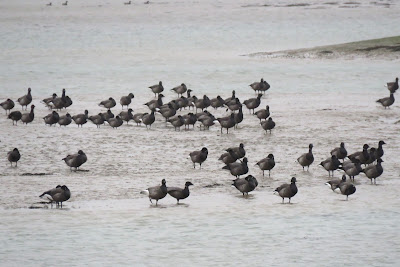 Birdham Pool/Itchenor Pond: There were c20 Little Grebes, a single Pochard and c30 Tufted Ducks on Birdham Pool, plus at least 100 Mallard, with a Grey Heron on the far bank and a Water Rail squealing from the reeds.
There was nothing of note around Itchenor Pond save a pair of Great Spotted Woodpeckers. (AH) 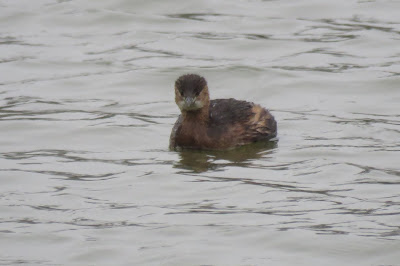