Bank Holiday Monday, 28th May: A very warm and sunny morning, with a light and variable breeze and a bit of light cloud....becoming humid and thundery with the risk of heavy rain.

One of the 20 or so Sanderlings at Church Norton harbour on 26th May (photographed by AW) was ringed on both legs with white over blue bands and with a metal flag on its left leg, and it turns out it was not from Chichester Harbour, but as follows -
The bird was ringed in or near Iwik village in the Parc Nationale du Banc d'Arguin in Mauretania (West Africa) by Job ten Horn on 31.1.2017, and seen there on on 3rd, 5th and 7th February 2017 by Benjamin Knep and has not been seen again until now. Presumably this bird was on its migration back to the Arctic when seen on our patch - a great record!(Thanks to Anne de Potier.) 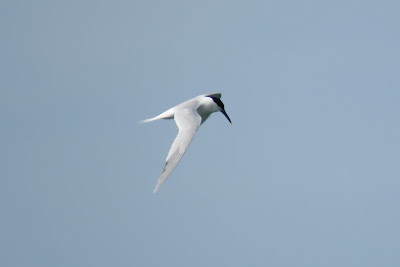 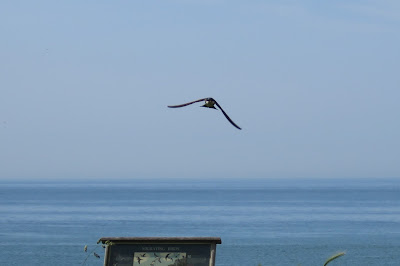 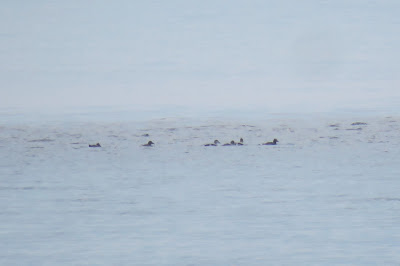 Eiders off the Bill (SH)

Park Farm Selsey: A Skylark was displaying over Asda and two Buzzards were about. (IP/S&SaH)

Medmerry: A pair of Stonechats were seen with a youngster this afternoon. (IP) This morning the west side produced four Stonechats, two Whitethroats and good numbers of Yellowhammers along the banks but the Stilt Pool was largely quiet, although the Avocets and their chicks seem to be doing well and the flock of Black-tailed Godwits were still in residence.  A Green Woodpecker was in the side of the ditches near Marsh Barn and there were three Buzzards soaring overhead. Only one species of butterfly seen with four Common Blues near Easton viewpoint. (BI) 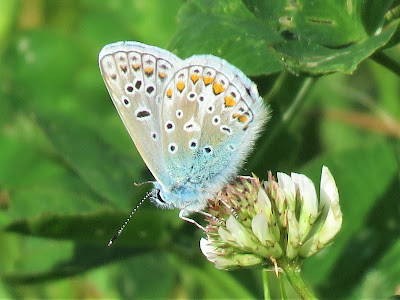 Ferry Pool: There were just the now semi-resident species present, including 15 Avocets, c80 Black-tailed Godwits, the Shelduck family, the Lapwing family and a another pair of Lapwings and two of RTedshank that looked like they had chicks hiding in hte vegetation. (AH) 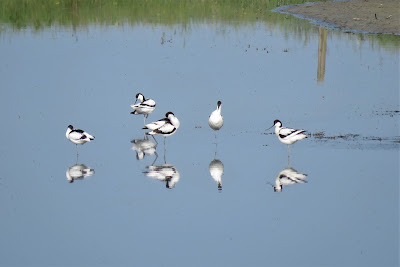 Avocets (above), Black-tailed Godwits & Redshank at the Ferry (AH) 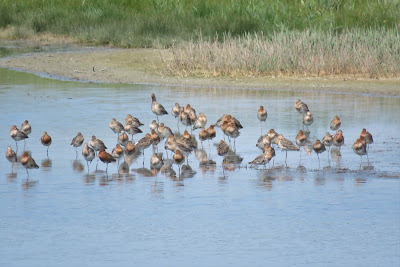 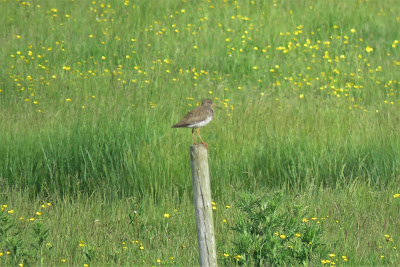 Church Norton: There was a Lesser Whitethroat behind the hide this morning, while in the churchyard there were the usual Goldcrests,Chaffinches, Whitethroats and a passing Reed Warbler. There was a Cuckoo calling from Priory Woods, the pair of Canada Geese appeared with six Goslings and I was also entertained for a while by a Stoat bouncing around the churchyard. (AW) 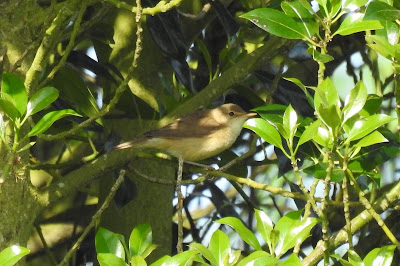 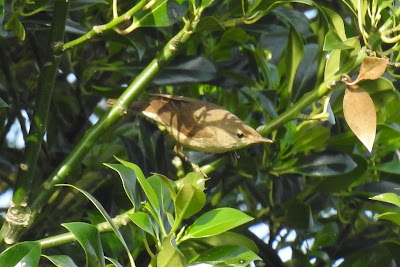 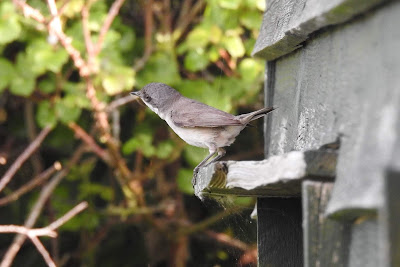 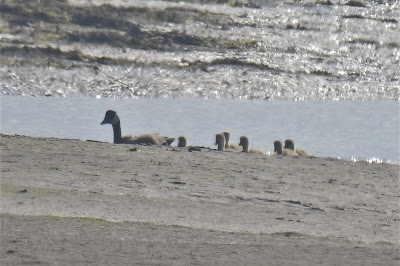 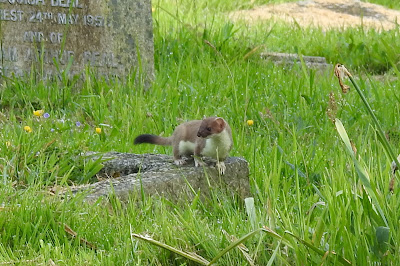 In the harbour, later, there were a Whimbrel and four Grey Plovers (IP), two Common Sandpipers flew east along the beach (S&SaH), the Black-tailed Godwit flock was present before it flew off towards the Ferry, a few Little and Sandwich Terns were about, a Lapwing was over the horse fieldand the pair of Swallows were about the hide. (AH) Also visiting birders reported a possible Nightingale near the Mound, but there was no further sightings. 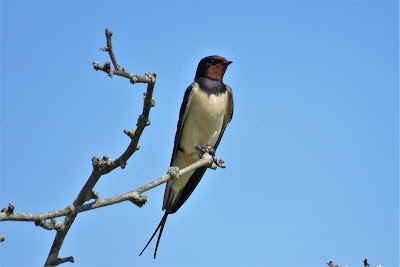 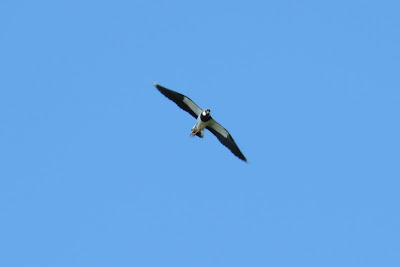 Pagham East Side: A Cuckoo was along the east side hedges this morning as were two Whitethroats and a few Long-tailed Tits. Less waders out on the mud early on with just a single Greenshank and six Ringed Plovers to note whilst in one of the channels was a single Brent Goose. (BI) 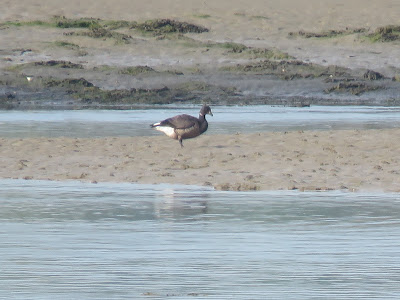 Sunday, 27th May: Rather humid and cloudy at first, following on from thundery showers overnight, becoming sunny and warm by late morning with just a light SW-SE breeze....

Ferry Pool: There were 90 Black-tailed Godwits, 9 Avocets, 2 Little Ringed Plovers, 2 Ringed Plovers and a summer-plumaged Knot on the pool this morning. The Shelduck family were also present, as were a pair of Lapwings with three well-grown young and 8 Redshanks, including a pair with small young. (OM)

Church Norton: There were plenty of Ringed Plovers and Dunlin out in the channels this morning, along with a few distant Sanderling, three Bar-tailed Godwits and a couple of Curlews. The hedges and bushes were mainly quiet apart from a few Linnets, a Chiffchaff and two Whitethroats but there were a few more butterflies about at last including Small &  Large Whites, Red Admirals, at least three Holly Blues and a Speckled Wood. (BI) 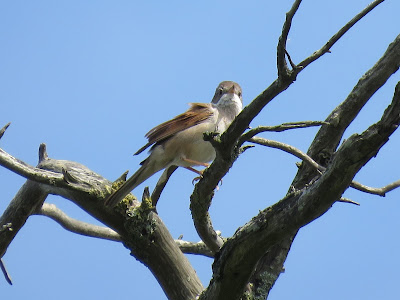 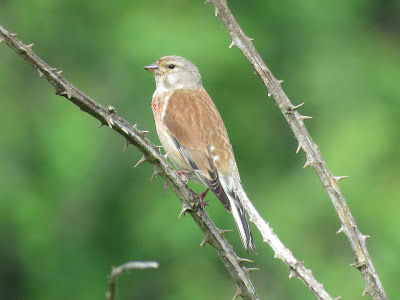 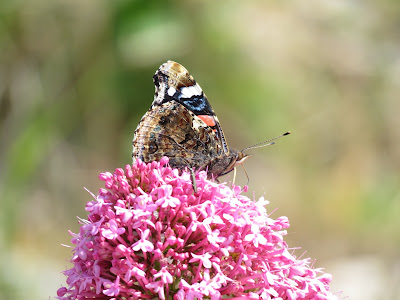 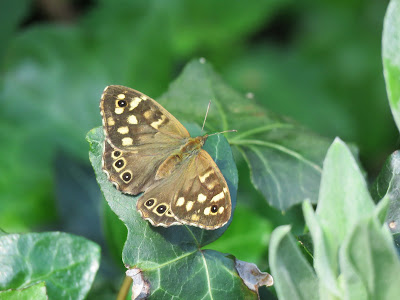 Pagham East Side: There were two Blackcaps and two Whitethroats along the Slipe Field and a Cuckoo calling nearby but otherwise it was fairly quiet. In the harbour there were c.65 Ringed Plovers, six summer plumage Grey Plovers, c.25 Dunlin and a small flock of Black-tailed Godwits. (BI)

Saturday, 26th May: A mainly bright and breezy day after a cloudy and murky start, with a brisk NE breeze, sunny spells and the risk of isolated thundery showers......


Church Norton: There was no sign of the Golden Oriole early this morning, and the only waders of note were 2 Sanderling and 3 Grey Plover. (SH)  In the afternoon there were five Bar-tailed Godwits (JPC) and 20 Sanderlings, including one coloured ringed bird (pink over blue bands on both legs and a metal flag on the left leg), with a mixed flock of Dunlin & Ringed Plovers and the Grey Plover was also still around the channels. (AW) 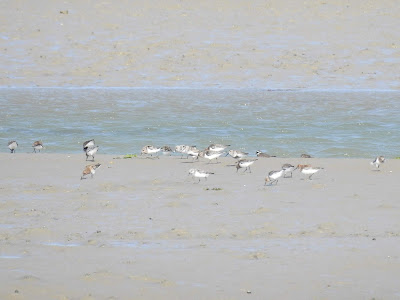 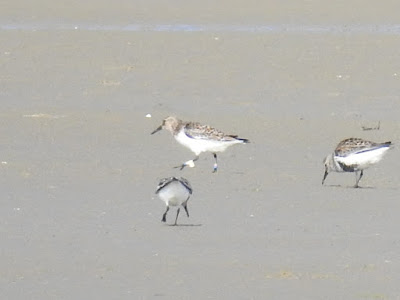 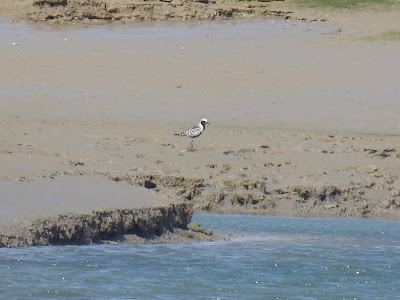 Ferry Pool: A Little Stint was present at the back of the pool this morning, plus 2 Greenshank (KJ) and later on there were also five summer plumage Knot and a Dunlin. (MJ/KJ) This afternoon the five Knot & the Little Stint were still present as was a Ruff, an Avocet, 30+ Black-tailed Godwits, four Dunlin, nine Ringed Plover & a Redshank chick. (JPC) In the evening there was a Greenshank, 11 Redshanks, c.50 Black-tailed Godwits and two Little Ringed Plovers on the pool. (BI) 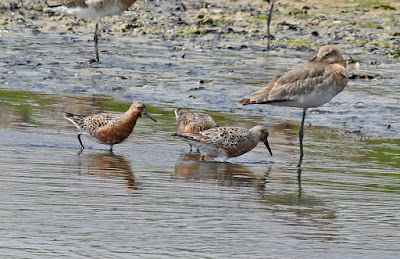 Knot in summer plumage & Black-tailed Godwit at the Ferry (JPC)

North Wall: There was a Starling creche in the Welbourne horse field with around 120 birds present, mainly juveniles, whilst on the Breech Pool were 3 pairs of Tufted Ducks, a couple of Cormorants and a Great Crested Grebe sitting on a very ramshackle and exposed nest. The flooded field near Homer reservoir has nearly dried up and the field itself has now been harrowed, so consequently there was little to be seen -  just 3 Shelduck, a few Black-headed Gulls and a Lapwing! Presumably the farming disturbance has now moved the Lapwing and Little Ringed Plovers on. On the reservoir itself was a pair of Tufted Duck, and a Cuckoo was calling nearby. Nothing else to report except a lot of Little Egret activity around Owl Copse. (JDW)

Earlier on the obliging Sedge Warbler was singing away from its bush and there seemed to be more Reed Warblers singing too with at least 10 counted along the wall. There were two Cuckoos present, with the additional bird at Halsey's Farm, and a Common Tern was fishing in a brook nearby. Two Buzzards were towards macrocarpa copse and a Kestrel was hunting here as well. (BI) 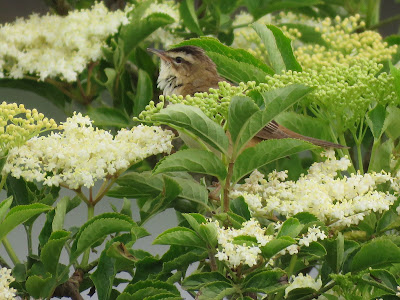 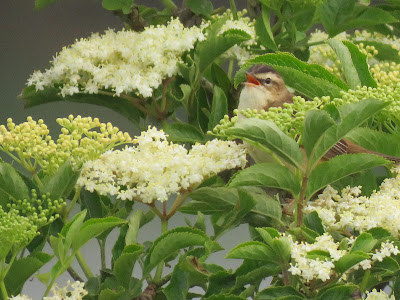 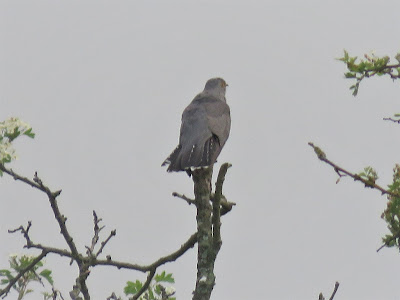 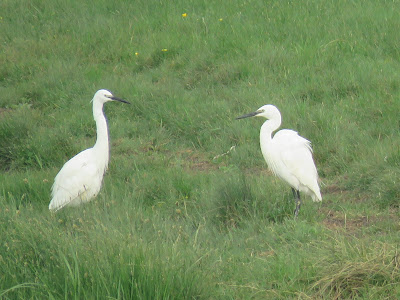 Medmerry-Earnley: There were up to 8 Spotted Flycatchers along the path and area from Earnley to Marsh Barn mid-morning, plus a Lesser Whitethroat and a number of Yellowhammers and Skylarks. Also, a Rock Pipit on the beach and a female Eider offshore. Also seen were an Emperor dragonfly and a male Beautiful Demoiselle (KJ) 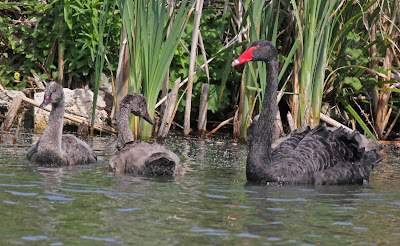