Sunday, 9th December: Cloudy and dry with hints of brightness through the morning and a fairly brisk NW wind, giving way to a few odd showers later.....

Selsey, Park Farm: There were 200+ Brent Geese in the fields, plus at least 30 Skylarks, a Sparrowhawk and a Mistle Thrush. (SH) Also, two Green Woodpeckers and at least 50 Curlew were in the field due for housing development! (IP/RM)

Church Norton: This morning two Buzzards and two Peregrines were over the harbour, whilst two Chiffchaffs were around the Severals and a Fieldfare was at Greenlease Farm. (S&SaH)
Five Red-breasted Mergansers were present early on and a drake Goldeneye was by the harbour entrance, whilst amongst the waders present were eight Bar-tailed Godwits, including the two in summer plumage. The second Several held four Tufted Ducks but little else, and a Grey Wagtail flew across; a late Red Admiral was also on the wing at Park Copse. (IP/RM/AH)

North Wall/Fields: Five grey goose sp. (probably White-fronted Geese) flew over west at 1400hrs, and there were 400+ Brent Geese in the fields. At Marsh Farm there were 11 Cattle Egrets and six Little Egrets around the cow sheds, where a Sparrowhawk was also present.
Along the hedgerows were 50+ of both Fieldfare and Redwing, plus two Cetti's Warblers, and two Rock Pipits were along the bank. (SH) 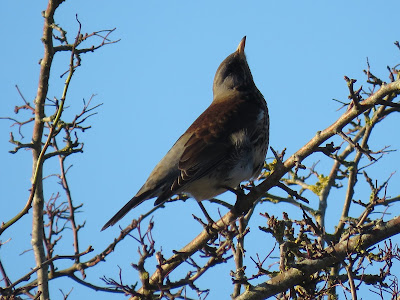 Fieldfare, Redwing and Cetti's Warbler along the North Wall (SH) 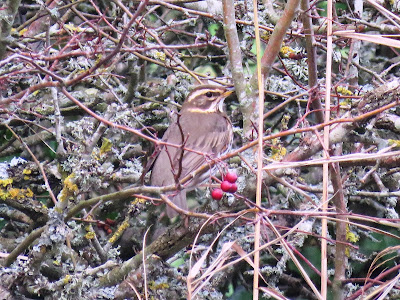 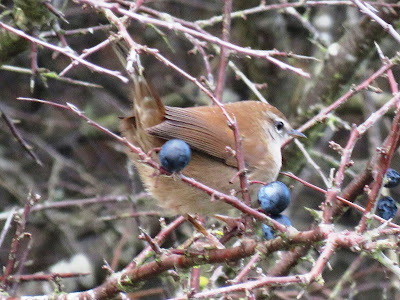 East Head: Generally quiet this morning with nothing at all offshore and little around the dunes/fringes other than a few Skylarks & Meadow Pipits, four Stonechats and four Reed Buntings. The clear highlight were a minimum of 170 Golden Plover out on the mud with a few Dunlin, Grey Plover and Knot. Also feeding around the mudbanks and saltmarsh were c.200 Brent Geese. (BI) 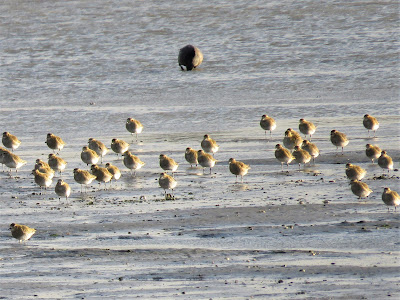 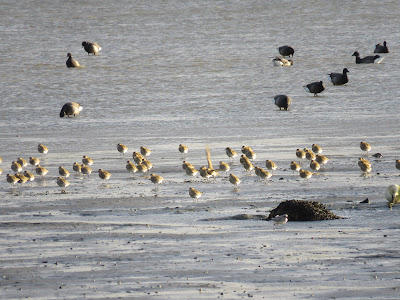 Birdham Pool: Twelve Little Grebes and plenty of Coots & Mallards was the sum this morning. (BI)

Saturday, 8th December: A fairly pleasant, if blustery, morning before the westerly wind picked up again and the grey clouds rolled in.... 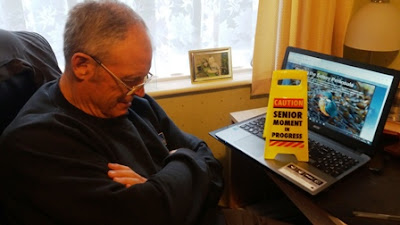 There are times when the pressures of editorial responsibility are just too great and a little thinking time is needed..... (with thanks (!!) to Mrs M)


Ferry Pool: There was just the usual assortment this morning, including 200+ Lapwings on the field and a dozen Gadwall, four Shelducks, c40 Shoveler and 50+ Wigeon and Teal on the pool, plus five Black-tailed Godwits that flew over, but didn't land. (AH) 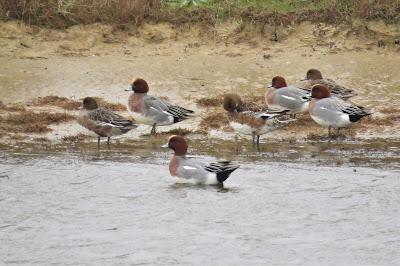 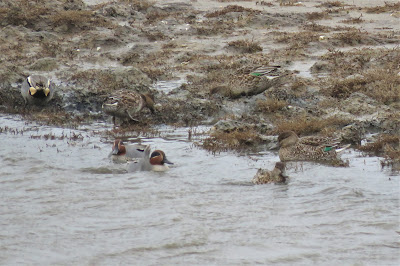 
Church Norton: A Short-eared Owl went high over Pagham, seen from the spit, this morning, and a flock of seven Egyptian Geese flew west over the west side, but there was not too much else out of the ordinary, though early on a Peregrine was out near the island and a Firecrest was among a few Goldcrests and Long-tailed Tits along the sheltered hedges.
The Whimbrel was present later on, as were eight Bar-tailed Godwits, including the two summer-plumaged birds, a lone Black-tailed Godwit and at least 200 Knot, 100+ Grey Plovers and 1000 Dunlin, plus several hundred Brent Geese and a few Wigeon and Teal.
Also about were at least four Red-breasted Mergansers, four Little Grebes, half a dozen Great Crested Grebes and a few Common and Mediterranean Gulls. (AW/AH/IP) 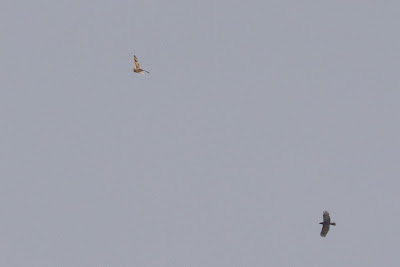 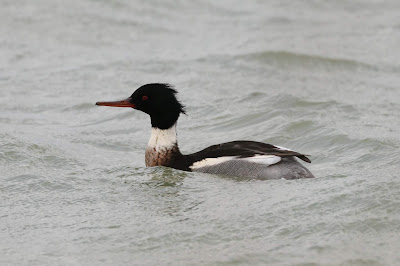 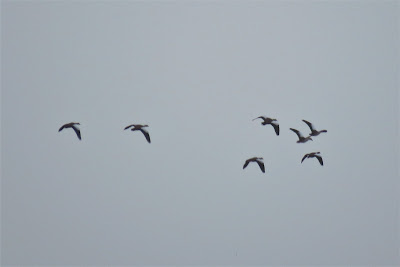 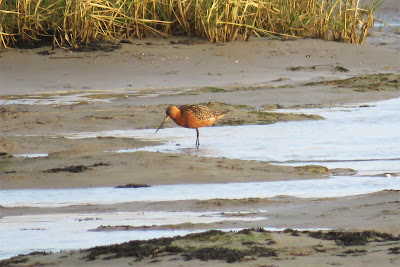 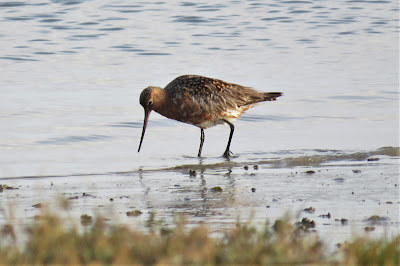 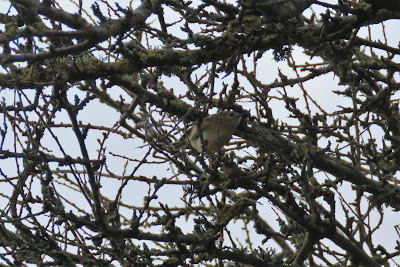 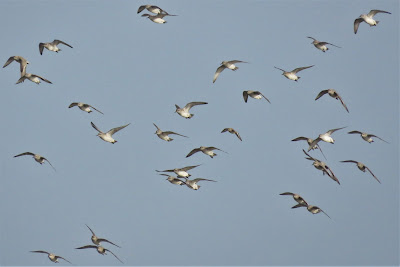 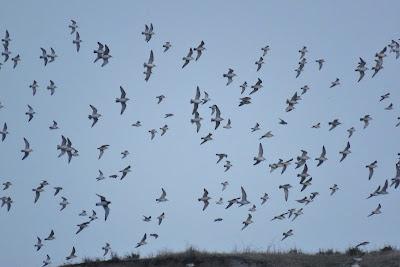 Friday, 7th December: A horrible morning's weather! From first light there was persistent heavy rain and near-gale force westerly winds, though still mild for the time of year, and slowly drying out later......

Important info and request: Apologies for this lengthy editorial, but help is requested regarding an important Brent Goose survey......
'As you may know in South Hants RSPB and NE have carried out a series of surveys to identify where Brent Geese forage in winter. As a result of that a series of fields have been designated as a Brent Goose sanctuary and no development is being allowed to take place near them. The general feeling is that we need to do something similar at Pagham so that we can fight off planning applications such as P/140/16 along Pagham Road, which has just been approved. What the recently approved development P/140/16/OUT has demonstrated all too clearly is that we have no idea which fields are important for the Pagham wintering Brent Geese flock.
Last winter (well to be precise in February and March) RSPB eventually got round to conducting the first 4 surveys around Pagham/Medmerry to find out which fields are important for the wintering flock of Brent. However, because of budget cuts RSPB appear unable to organise a similar survey this year, so I have said that SOS will do it – but I need help.
There are 4 areas to be surveyed. Surveys will be carried out by car where fields can be seen from the road, and on foot where cars cannot reach. Each survey will take 4 hours. Jim Weston has agreed to cover the eastern sector and I will cover another sector – last year I did the western sector so if no one else especially wants to cover that I will cover it again. Which leaves us needing a couple of volunteers to cover the Southern and Northern sectors.
I suggest that we aim to do 6 surveys this winter, one in the 2nd half of December, 2 each in January and February and one in the first week of March. All 4 surveys will need to be carried out at the same time for obvious reasons. So I am looking for two more volunteers. When I have a list of volunteers I will arrange mutually convenient dates for the surveys which I suggest be done between 8am and noon.
If you would like to volunteer could you contact Richard Cowser (cowser@btinternet.com, 01903 770259)'  (Note: Maps were supplied but for reasons of space they are not included here, though can be forwarded to volunteers...Eds)


Ferry Pool: There were at least 500 Lapwings and 100 Wigeon on the field, and five Sheducks, eight Gadwall, c40 Shoveler and c60 Teal, along with c30 roosting Black-tailed Godwits and a few Redshanks on the pool. (AH) 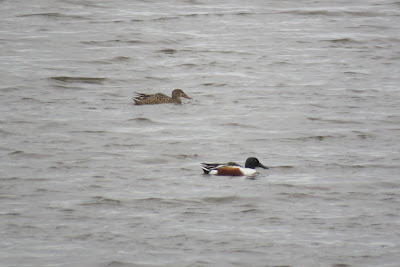 Shoveler (above) & Lapwings at the Ferry (AH) Church Norton: Unsurprisingly little to report, though two Firecrests were near the hide, five Avocets flew up through the harbour and the summer-plumaged bird was among five Bar-tailed Godwits present.
Otherwise, a couple of red-breasted Mergansers and half a dozen Great Crested Grebes were on the water, along with 300 Brent Geese and a few Wigeon and Teal, and there were plenty of the commoner waders, including c80 Knot, c50 Grey Plovers and c1000 Dunlin on the mud before the high-tide displaced them. (AH) 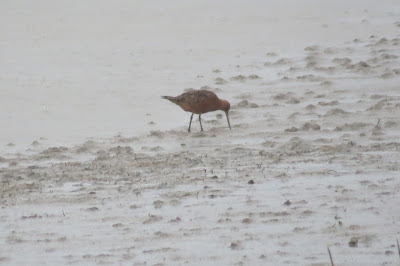 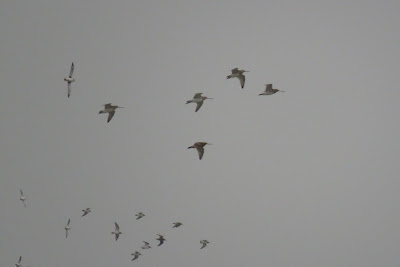 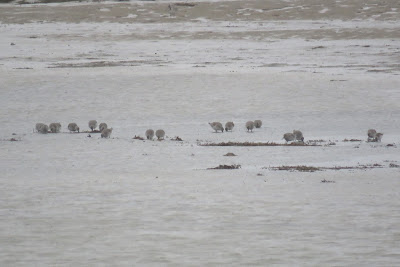 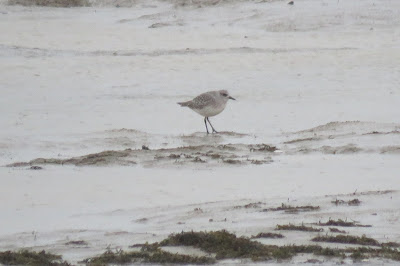 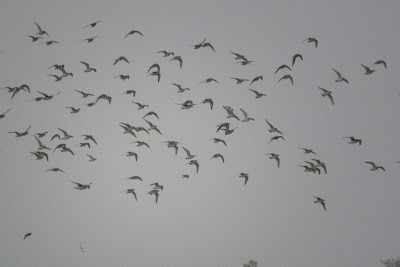 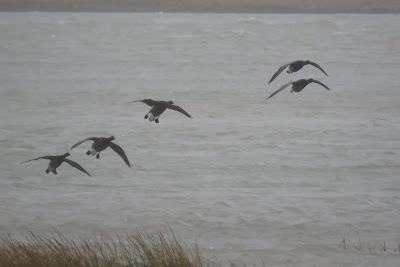 East Head: Not too unpleasant this morning in the sheltered parts and so there were 35 Skylarks, two Pied Wagtails and 15 Meadow Pipits to be found feeding in the lee of the wind on the east side. Around the head with the tide well in were eight Red-breasted Mergansers, two Great Crested Grebes, a fishing Cormorant, a Teal, five Wigeon, four Shelduck and c.100 Brent Geese.
Towards Ellanore a large flock of Dunlin, probably 1000 birds, could be seen wheeling over the water with a few Knot mixed in and there were two Ringed Plovers in the high tide roost. (BI)

Medmerry: Porthole Farm to Ham Farm - A Pale-bellied Brent Goose was among 1500 Dark-bellied Brent Geese (of which only a few appeared to be juveniles, sadly) in the fields between the two farms this afternoon, and seven Grey Partridges were in the field south of the sewage works.
Also a few Meadow Pipits and Goldcrests, plus a Mistle Thrush and a Sparrowhawk were in hedges near Ham. (AH) 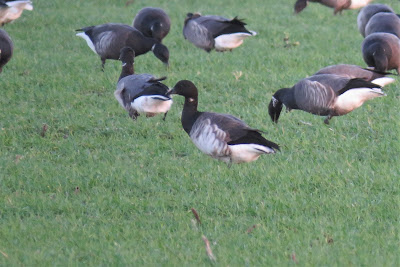 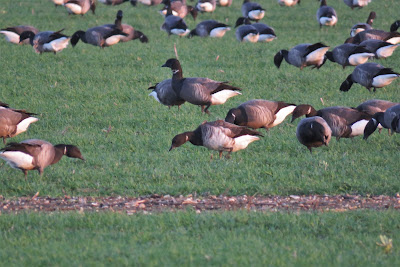 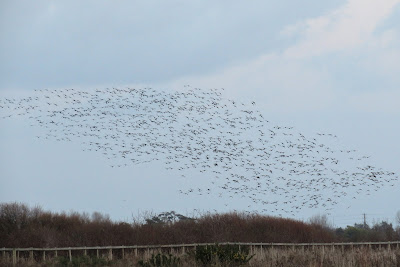