Saturday, 29th February: Leap year day - but yet another very wet and windy start, giving way to sunny spells and the risk of heavy showers later, with a strong southerly wind veering WSW later and increasing to gale force....

Selsey Bill: There was some reward at last for the sea-watchers with the clear highlight being a Puffin flying west at 9.20am, and the first bit of visible spring migration, with a few Meadow Pipits, Linnets and Pied Wagtails arriving. Full log below......
(0650-0950hrs)  (Wind S6 - WSW7/8)  (SH/IP/AH/BI)
Red-throated Diver - 1E 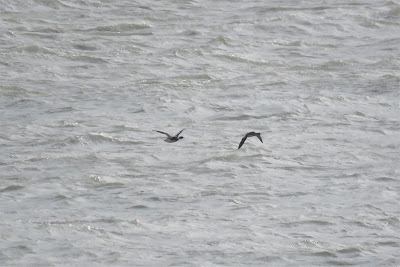 Red-breasted Mergansers at the Bill (AH)

Ferry Pool: All the wildfowl were sheltering under the far bank this morning, and included three pairs of Gadwall, eight Shelducks, c40 Teal and Shovelers and c100 Wigeon, whilst a pair of Oystercatchers were down near the road. (AH)
Later, a Spotted Redshank was in Ferry channel and a Red-breasted Merganser was by the outflow of red barn ditch. (RP) 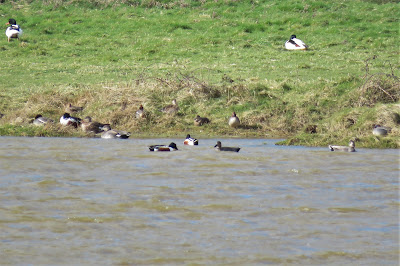 Gadwall, Shovelers, Teal and Shelducks (above) & Oystercatchers at the Ferry (AH) 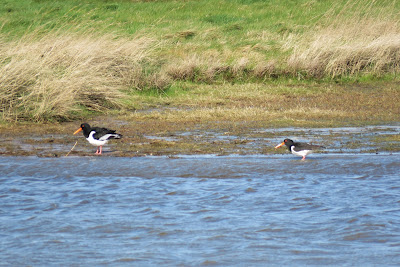 Church Norton: A Barn Owl flew in and settled on a post in the sheltered corner of the field behind the hide, later moving up into the hedge to roost.
Also, at least six Chiffchaffs among the Long-tailed Tits long the sheltered hedges would appear to be newly arrived migrants, though there was little other evidence of migration.
There were c50 Knot among the Dunlin and Grey Plovers on the mud, though most of the waders appeared to be on the far side of the harbour, where there were also c500 Brent Geese, whilst the only other birds of note were a Raven over Priory Wood, a few Mediterranean Gulls, a pair of Red-breasted Mergansers in the main channel and a pair of Gadwall on the flood by the horse field. (P&JW/AH/IP) 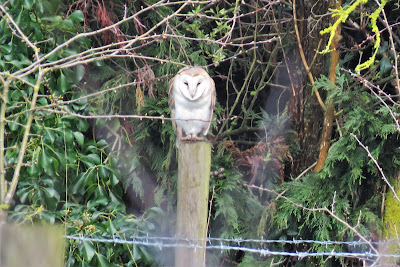 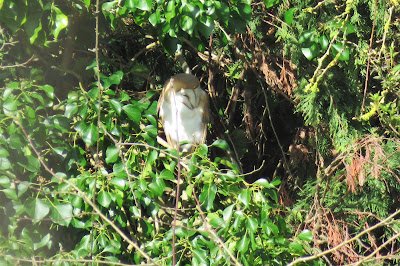 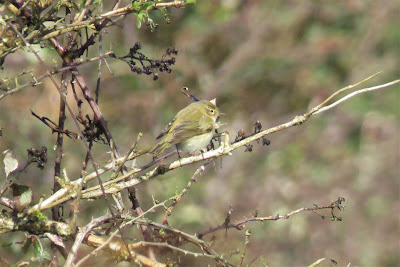 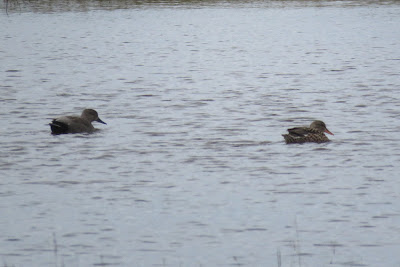 North Wall: The windswept fields this morning contained about 2,000 Brent Geese, at least 300 Black-tailed Godwits, Lapwing, Wigeon (though lower numbers than previously) and Teal.  Little else was about.  (IH)


North Selsey & Park Farm: A Stonechat and a Green Woodpecker were on the rough ground at the rear of the factories, whilst nearby a Grey Wagtail was at Park Farm. (SH)

Friday, 28th February: Another truly awful morning's weather, with a cold and gale-force southerly bringing persistent drizzly rain with it......the misery goes on, with another named storm due this weekend! 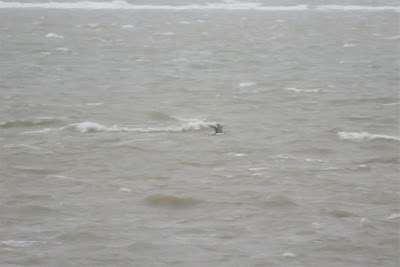 Red-throated Diver (above) & Mediterranean Gulls at the Bill (AH) 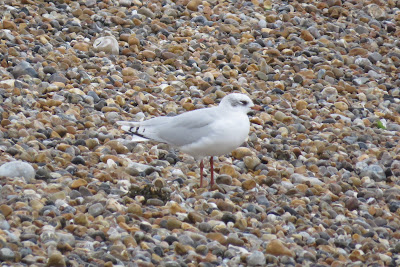 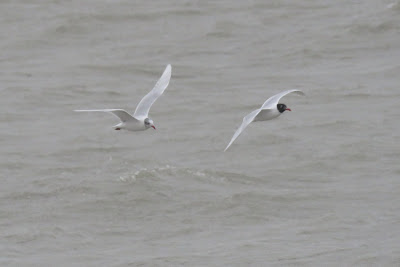 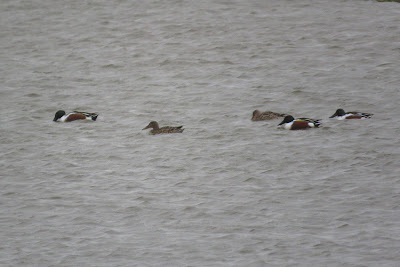 Church Norton: About 50 Brent Geese dropped in, a dozen Teal were on the water, with a handful of Mediterranean Gulls also about,whilst the usual mix of waders, including c100 Knot, c50 Grey Plovers and c400 Dunlin were out on the mud, along with a few Curlews, Redshank and Ringed Plovers. (AH) 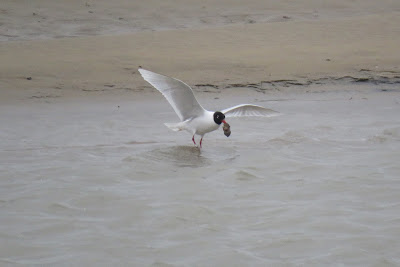 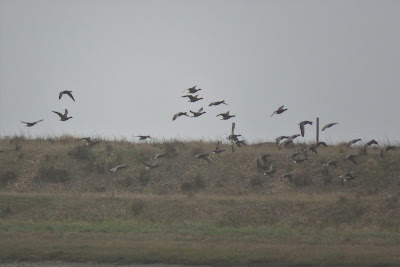 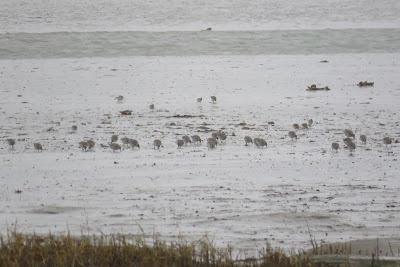 Runcton: A male Reed Bunting was again on the garden feeders and a Song Thrush put in an appearance, whilst there was plenty of activity from the local Blue, Great and Coal Tits. (CRJ) 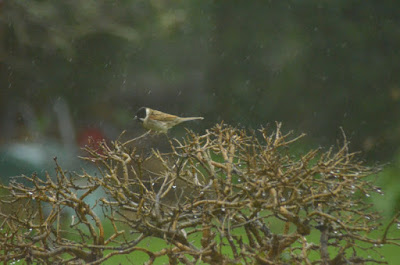 Thursday, 27th February:: A shift in wind direction this morning - north-easterly early on before backing north-westerly - though remaining at near gale-force and cold, with heavy overnight rain giving way to sunshine and cloud...... 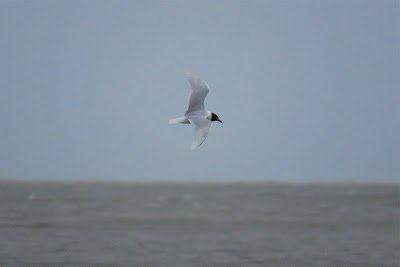 Mediterranean Gulls at the Bill (AH) 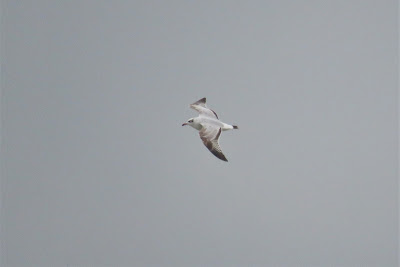 Hunston: A dozen Cattle Egrets were in the usual field east of the sub-station this morning, with another bird a few fields west towards the Free School. (NM)

Ferry Pool: A lone Avocet, four Gadwall and ten Shelducks were around the pool, along with c50 Shoveler, c100 Teal and c150 Wigeon, with c200 Lapwing on the field. (AH/IP/IL) 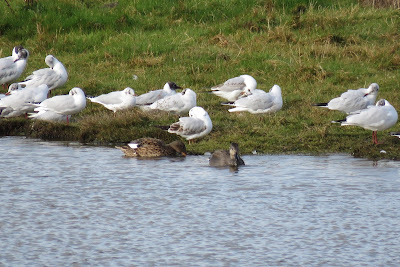 Gadwall and Black-headed Gulls on the Ferry (AH)

Medmerry Trail/Sidlesham SF: There would appear to have been an influx of Stonechats this morning, with eight together in the small field by the sewage works and another three on Ferry field.

Otherwise, there were four or five Chiffchaffs in the sheltered hedges - with a couple briefly singing, a few Pied Wagtails in the maize stubble fields, a handful of Mediterranean Gulls with the Black-headed Gulls on the settling tanks, a Buzzard over and a Goldcrest and the odd Long-tailed Tit along the concrete road. (AH/IP) 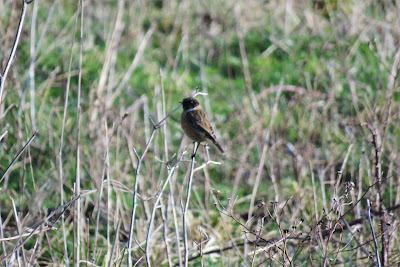 Stonechat (above) & Chiffchaff along the Medmerry Trail (AH) 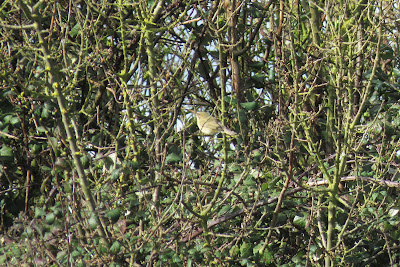 North Wall: A mid afternoon visit brought 4 Song Thrushes and the Kestrel in the horse paddocks, a Grey Wagtail at the sluice gates and Golden Plover, Dunlin and Shelduck in the harbour. And from the harbour flew about 1,000 Brent Geese which joined a similar number in the field at the end of the Wall.
A Barn Owl hunted over the reed beds and flushed a Snipe and later a Marsh Harrier also appeared. The flooded fields still contain large numbers of Wigeon, Teal, Black-tailed Godwits, Curlew , a few Shoveler and Shelduck as well as 8 Herons in a huddle. (IH/NR)