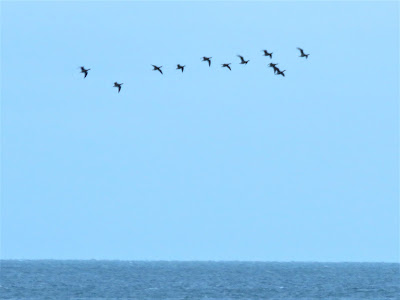 Brent Geese passing over high at the BIll (BI)
North Selsey: A Hobby was over the play park area at Selsey centre this afternoon. (S&SaH)
Park Farm: This morning there was a Chiffchaff in the company of a Willow Warbler and two Pied & one Grey Wagtail near the reservoir whilst the fields contained a minimum of 12 Mediterranean Gulls and 100 Meadow Pipits. A Sparrowhawk went through and there was a mobile flock of c.20 Linnets in the general area. (IP)
Later, 10+ Swallows, 20+ House Martins, 40+ Meadow Pipits, four Pied Wagtails and six Stonechats were noted, along with a Buzzard and a Sparrowhawk. (S&SaH)
Medmerry: Easton Lane to Stilt pools - A Redstart was along the road of Easton Lane, just west of the car park. Later, a Cattle Egret went west  and two Spoonbills were opposite the Stilt pools, where there was also a Common Sandpiper, whilst two Wheatears were on the beach. There were also a few Yellow Wagtails and lots of Meadow Pipits about. (HB)
Ferry Pool: There were eight Black-tailed Godwits, three Dunlin, four Lapwing, c.80 Teal and several Shelducks and Wigeon on the pool this morning, plus a large flock of c.250 Mediterranean Gulls.
Today I had the pleasure of meeting M. Renaud Flamant in the hide; he is the Belgian ringing expert for the species and European national co-ordinator and this morning he picked out at least six colour-ringed birds from the flock. It certainly made me appreciate how much my eyesight has aged and I also learnt a good bit more about the species!
Having spent a successful time at Church Norton yesterday and here again today, he estimates there are a minimum of 1000 birds in the reserve at the present time, commuting between these two venues and elsewhere....and he was keen for me to remind observers to look for colour rings and submit details whenever possible! (OM) 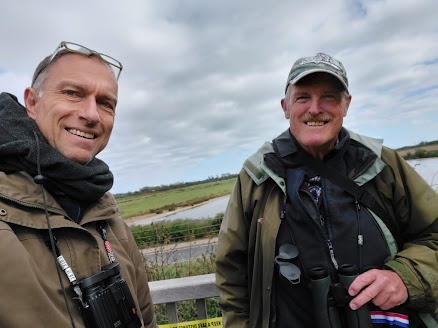 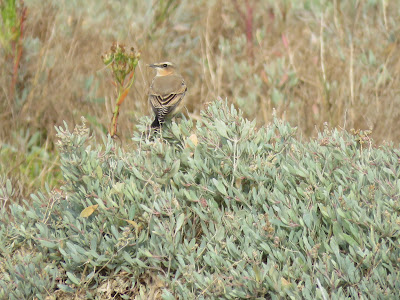 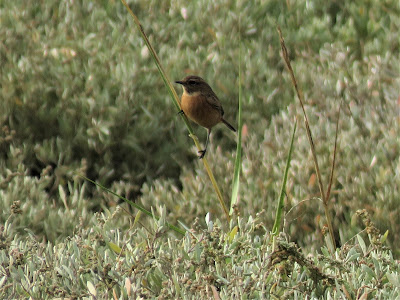 North Wall: Late afternoon a nice male Marsh Harrier was at the back of the Breech Pool, whilst c.7 Cattle Egrets were distantly by the cowsheds at Marsh farm. (AB)
Church Norton: Today was definitely the day of the Chiffchaff with at least fifty birds seen including five at Greenlease Farm and a dozen with the Long-tailed Tit flock at Bluebell Wood. In the horsefield bramble (what's left of it!) eight Stonechats were to be found and there were a further two near the Severals and at the small copse respectively. High tide in the harbour found most birds in the roost but two Grey Plovers, a Ringed Plover, a dozen Turnstones were noted. Offshore, two close Gannets flew past as did four Pintail heading west. and finally a Grey Wagtail flew over the horsefield. (IP)
Saturday, 26th September: A chilly but splendidly clear and sunny morning, with a strong NW wind f 5-6.
Selsey Bill: There was a decent bit of 'vis mig' going on early this morning in the brisk wind, with a selection of migrants passing through, but little happening offshore. Full log below. (SH/BI/RP/PB/IP)
(0630-0930hrs) (NW, F5)
Gannet - 8W, 1os
Brent Goose - 2E, 3W
Common Scoter - 1E
Pintail - 1E
Turnstone - 4
Bar-tailed Godwit - 1W
Sandwich Tern - 3 os
Mediterranean Gull - 45W
Sparrowhawk - 1ij
Pied Wagtail - 54W
Yellow Wagtail - 2W
Grey Wagtail - 22W
Meadow Pipit - 542NW
Skylark - 4N
Swallow - 11W
House Martin - 34W
Chiffchaff - 3
Goldfinch - 14W, 20 area
Siskin - 181W
Lesser Redpoll - 6W 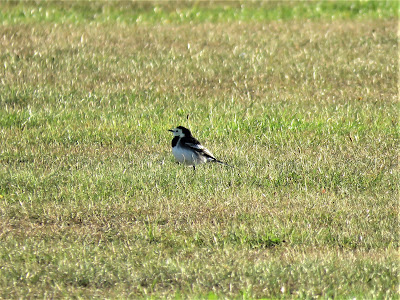 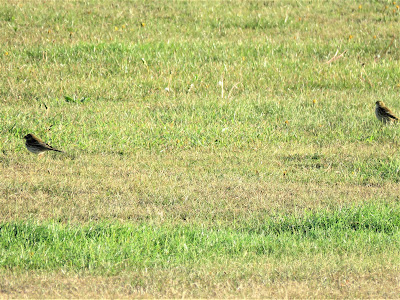 North Selsey: At least 6 Chiffchaffs were around the estate this morning. (S&SaH)
Park Farm: A Raven, a Sparrowhawk and three Kestrels were present this morning, whilst migrants included three Chiffchaffs, a Willow Warbler, a Pied Wagtail, 30+ Meadow Pipits, three Swallows and seven Stonechats (in the salad field). (S&SaH)
Church Norton: A Hen Harrier was reported fairly early on (0850hrs) but it apparently disappeared off to the south-west all too soon. (A&YF) Observers searching later for the bird could not re-locate it, although just prior to the sighting another report was received of a possible harrier sp over the hide/churchyard. (Eds)
A Merlin was also reported from various locations during the morning by at least three observers. Around the Hide were two Spotted Flycatchers, two Blackcaps, three Chiffchaffs and a Sand Martin, whilst the pair of Swallows were still feeding the young of their late brood within the Hide. In the harbour, two Bar-tailed Godwits were around the old metal work and three
Wheatears were on the beach. The churchyard held seven Chiffchaffs, a Red-legged Partridge was on the ploughed field and both a Merlin and a Sparrowhawk were noted nearby. There were also a few Stonechats around the horsefield, were the scrub has sadly been removed, c.10 Siskins went over and the Whimbrel was still in the harbour.
Around Greenlease farm were two Buzzards, six Pied Wagtails, four Swallows and 20+ Meadow Pipits. (S&SaH/SR/IP/BI/AW/AB et al) 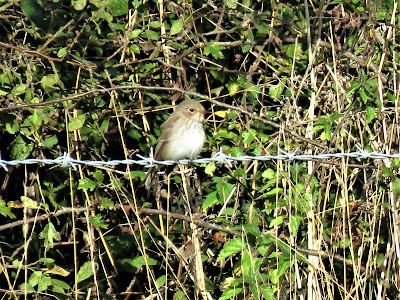 Spotted Flycatcher at Church Norton (BI)
North Wall: This afternoon there were 20 Cattle Egrets to the north of Halsey's Farm, with a Merlin hunting low over the fields. (AW) 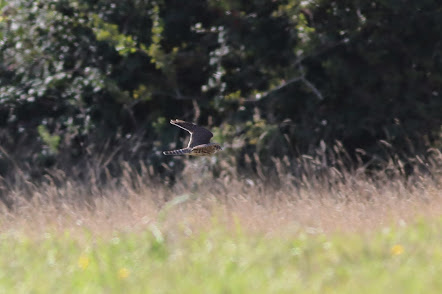 Merlin (above) and Cattle Egrets at the North Wall (AW) 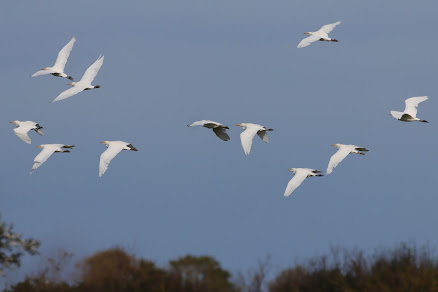 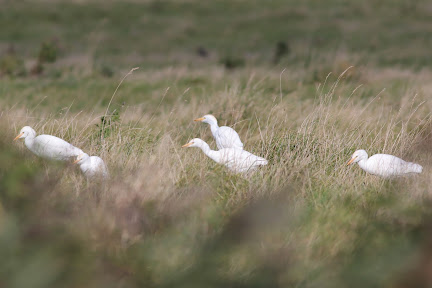 Medmerry: Easton Lane to Stilt pools - Along the banks and tracks late afternoon there were 200+ House Martins and 20 Swallows, two Yellow Wagtails, a Grey Wagtail, a Wheatear, 14 Stonechats and three Chiffchaffs, whilst out in the reserve were a Greenshank, a Green Sandpiper, 15 Dunlin and a Snipe, but there was nothing of note on the Stilt pools. (S&SaH)
Birdham Pool: Few birds about in the choppy conditions but an eclipse male Mandarin Duck was tucked into the sides amongst c40 Mallard on the pool and 11 Little Grebes.
A Water Rail was squealing out of sight, two Pied Wagtails were about and three Swallows, four House Martins and a Buzzard flew overhead. (SR) 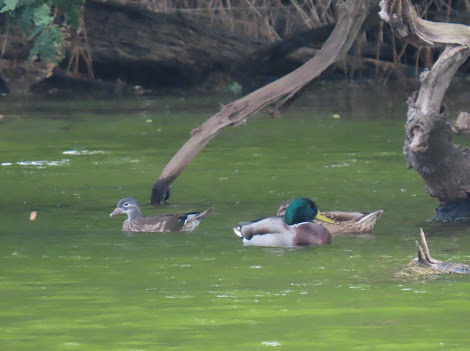 Presumed eclipse drake Mandarin on Birdham pool (SR)
Friday, 25th September: A cool, grey and blowy morning, with some brief early showers giving way to a few sunny breaks, but with a chilly and brisk NW wind force 5-6...
Ringed Mediterranean Gulls & other species: There have been some big numbers of Med Gulls on the Peninsula this autumn - and indeed elsewhere - and amongst them are inevitably quite a few colour-ringed birds, these rings usually bearing a combination of letters and/or numbers. Could we ask all observers to look out for for such birds and report them (Euring/BTO) if details have been obtained; this also applies equally to any other species where appropriate.

This weekend, Belgian Med Gull expert and ringer/co-ordinator Msr Renaud Flamant will be on our patch looking for ringed Med's and should you chance to meet him, we kindly ask that you give him any assistance you can.
It can be very rewarding to see the history of a ringed bird, and as an example, the following is a recently reported bird, found by AW, as follows:-
"I've just received the following info on a ringed Med Gull I found yesterday at Church Norton. A much travelled youngster, having been as far as Portugal....
White 3157 ringed 22/06/2018 Sint-Amands; Puurs-Sint-Amands; Antwerpen; Flanders; BELGIUM 51,03N 4,13E 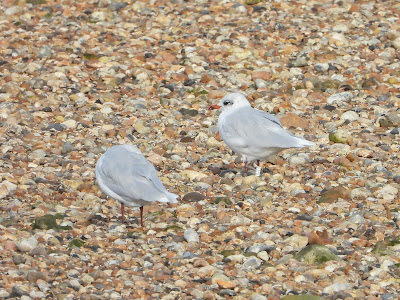 Mediterranean Gull bearing white ring 3157 (AW)
Recently, on 22nd September, three colour-ringed Black-tailed Godwits were at Chichester Marina amongst over 100 of their kind (OM). These birds sported colour-rings on both legs (no numbers/letters) and by careful noting of the combinations it was possible to establish their exact identities. They had all been reported multiple times having been originally ringed in Chichester Harbour area, but had visited many sites on the east and south coasts of the UK through the years, plus various visits in the breeding season to Iceland.
Whilst some observers may have different views on the benefits of ringing birds, many species have been colour ringed, from other gulls to waders, and field observations after the initial ringing is all that is required, with no trapping necessary. It really is worth the effort involved in observing and obtaining details then submitting the data, so please help if you can. (Eds)
Selsey Bill: An Osprey came east and then drifted south early, three Lesser Redpolls went north and 12 Grey Wagtails, including a flock of ten, went west. (BI/RP/MOW/IP)
(0630-0830hrs) (NWF5)
Great Crested Grebe - 1E
Gannet- 9E, 17W, 30os
Common Scoter - 1W
Osprey - 1S
Grey Wagtail - 12W
Pied Wagtail - 2W
Meadow Pipit - 22N
Lesser Redpoll - 3N
Chiffchaff - 1
Ferry Pool: There were no waders on the pool, though at least 200 Mediterranean Gulls were present, along with ten Shelducks, six Wigeon and 75 Teal, whilst 20+ Swallows went over. (AH) 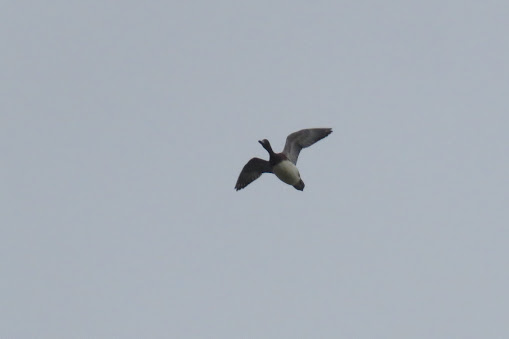 Wigeon at the Ferry (AH)
Long Pool & West side: This morning there were seven Spotted Redshanks among the Black-tailed Godwits on Long Pool. A Kingfisher was seen hovering while fishing in the channel, whilst five Stonechats and two Pied Wagtails were seen along the West side. There were a large number of Pintail and Wigeon spread up the harbour. (AW) 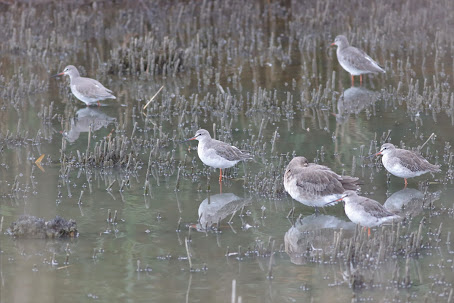 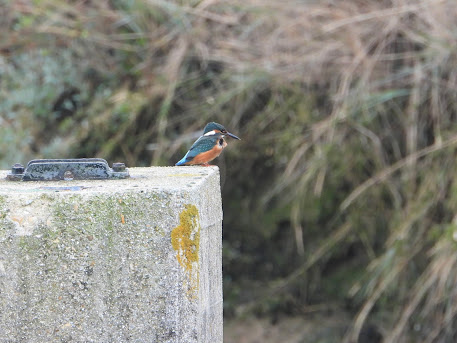 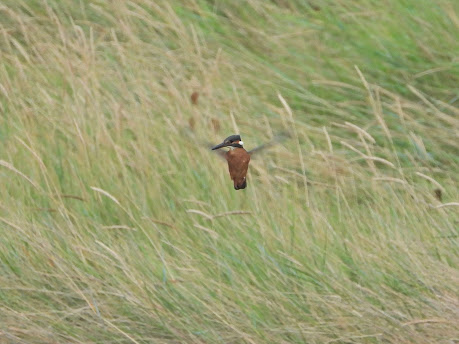 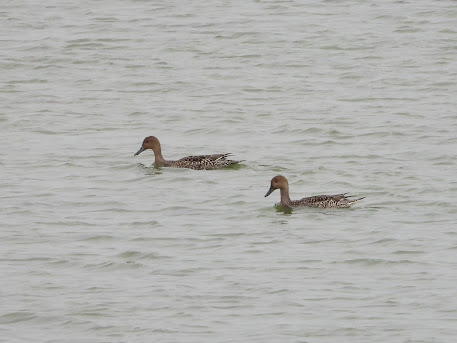 Church Norton: There were no less than four Spotted Flycatchers still behind the hide, whilst the sheltered hedges held 20+ Chiffchaffs and Blackcaps, plus at least five Whitethroats. Also, around 70 Siskins went over in two flocks, and at least 200 Swallows and 100 House Martins went over in one loose flock.
The harbour held at least 80 Pintail and 60 Wigeon, though few waders were about, with the 400+ Mediterranean Gulls being the most prevalent species. (AH/AW) 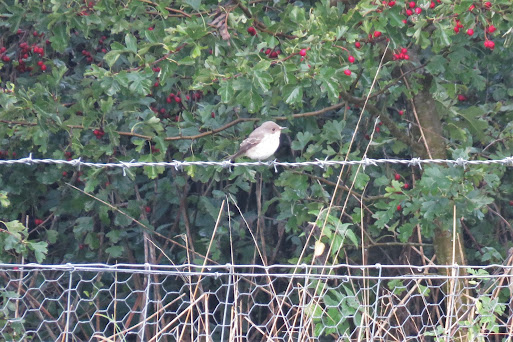 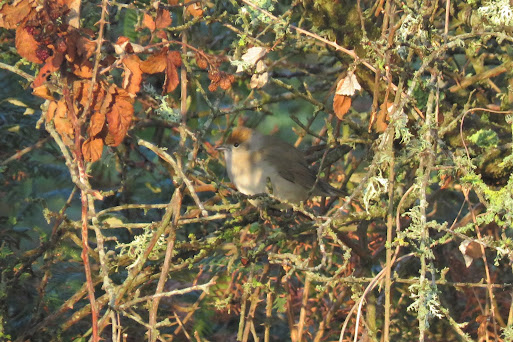 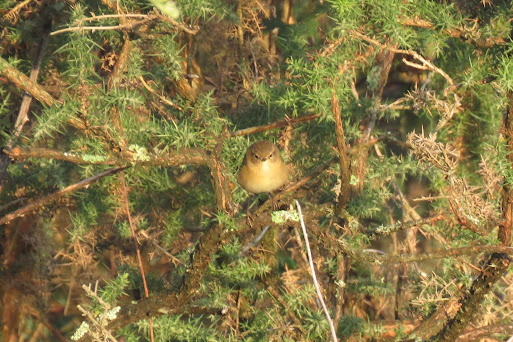 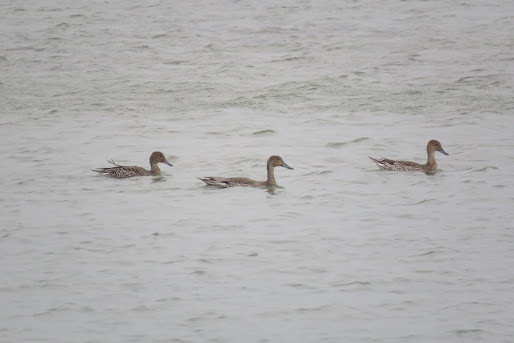 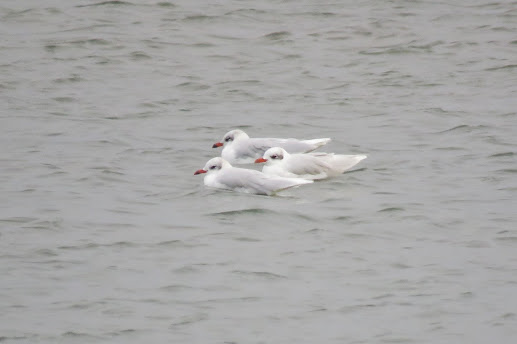 North Wall: A Kestrel at the horse paddocks (with another at Owl Copse) was followed this morning by a Grey Wagtail and Kingfisher at the sluice gates and a Wheatear along the rocks. About 100 House Martins flew south-west but the hedgerows were fairly quiet in the cool breeze, apart from a Stonechat, a Jay and a couple of Reed Buntings. (IH)
Owl Point was productive today: there were c.150 Meadow Pipits in the fields, with more dropping in, five Wheatears, ten Reed Buntings, a minimum of ten Stonechats, half a dozen Pied Wagtails over, a Grey Wagtail and c.20 Yellow Wagtails with the cattle whilst a Spotted Flycatcher was in the hedgerow. (BI)