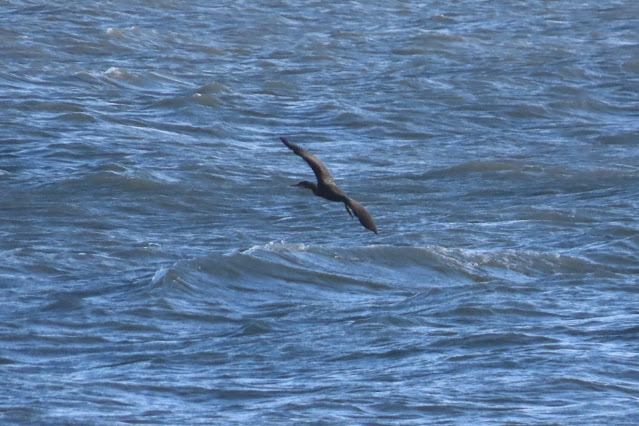 Ferry Pool: What little there was on a very full pool was tucked in at the back, including eight Avocets, four Redshanks, six Shelducks and 50 or so Teal, Wigeon and Shovelers whilst a pair of Stonechats and a couple of Skylarks were on the field. (AH) 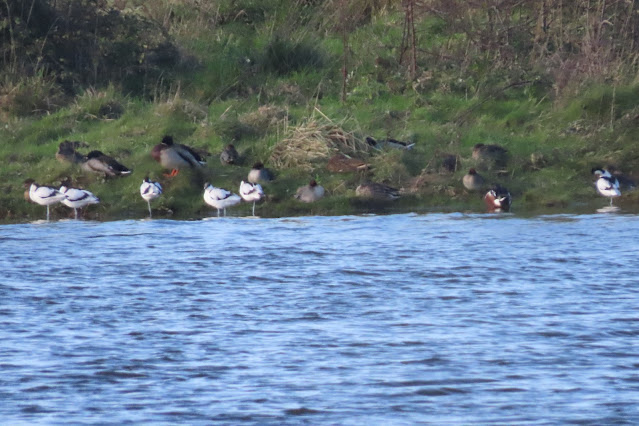 Avocets, Shoveler, Teal and Mallards on the Ferry (AH)
Church Norton: A Greenshank flying around the harbour was the only wader of note, though there were 50+ Grey Plovers and 100+ Dunlin on the mud before the tide rose, with c50 Wigeon and Teal and c100 Brent Geese also present, along with another 40 of the latter in the fields behind the churchyard.
Two Swallows went over the harbour and two pairs of Stonechats were along the Severals, but otherwise there were just a handful of Chiffchaffs and Goldcrests, and a few Long-tailed Tits, in various bits of sheltered vegetation. (AH) 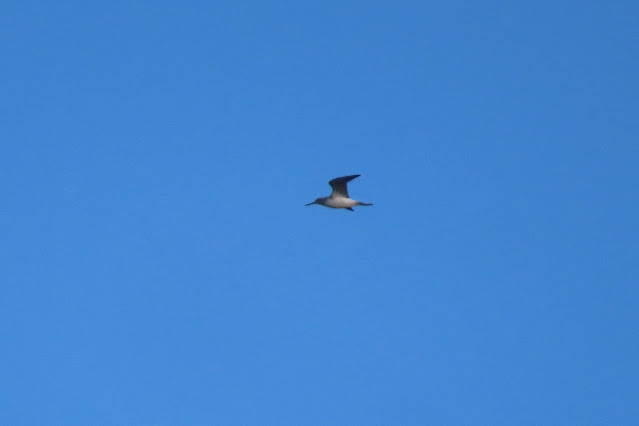 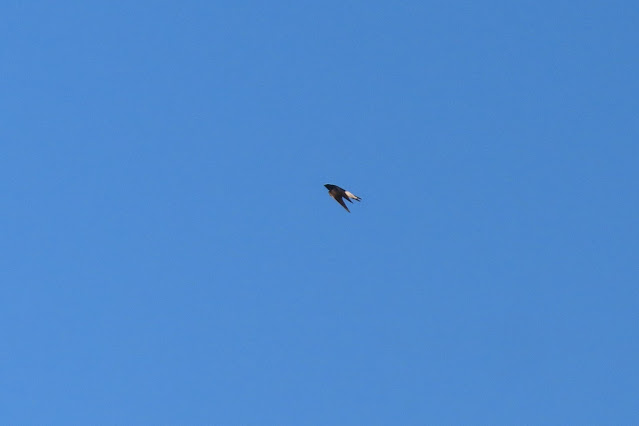 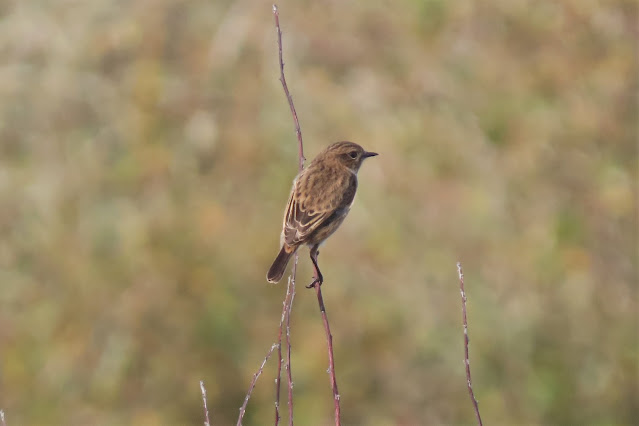 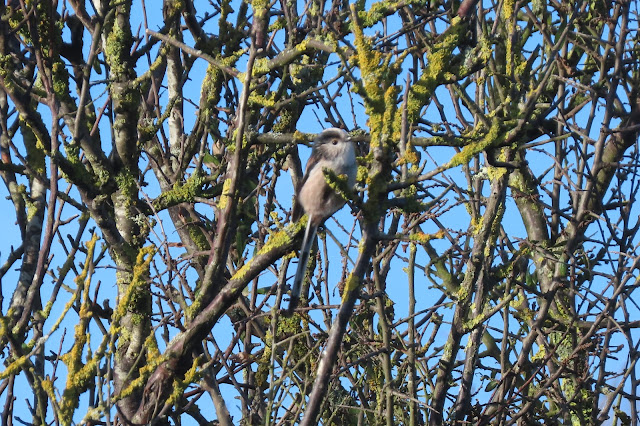 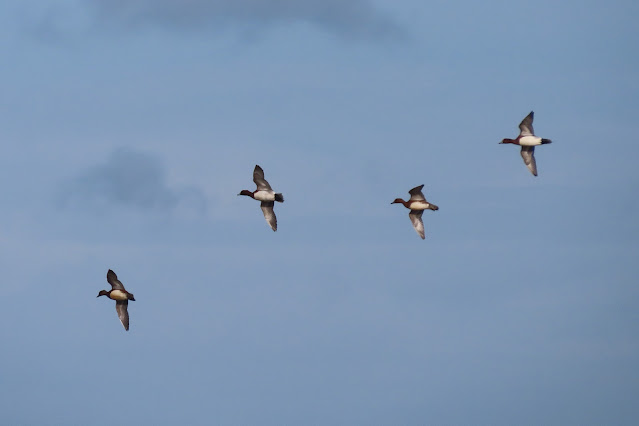 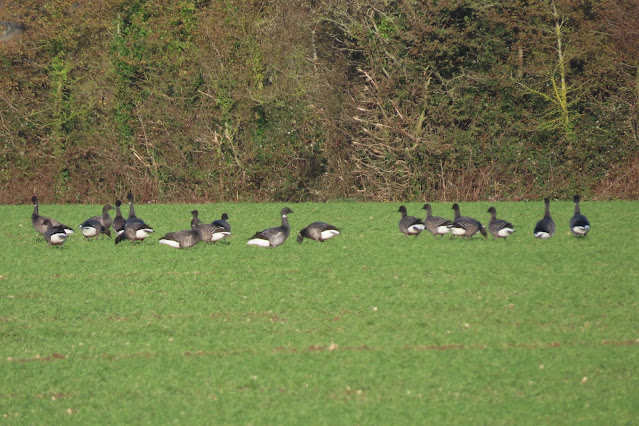 Medmerry: Easton Lane to Marsh Barn - A very windy afternoon at Medmerry found a Long-tailed Duck in the channel near the Easton Viewpoint, taking shelter amongst the large number of Teal present. (P Court per SOS)
Lagness: A Red Kite went over, heading towards the harbour, this morning. (TG-P)
Pagham Beach: A Black Redstart was along the revetment rocks on the beach at lunchtime today. (T Taylor)
North Wall: A male and a female Marsh Harriers were over the Breech Pool this morning, with 12 Shelducks, a Tufted Duck, 12 Coots, a Water Rail, nine Stock Doves and two Cetti’s Warblers also in the vicinity. (CRJ/AB)
Also, two Swallows were over the Church Barton Reservoir. (JDW)
Later on, in White's Creek, on a rising tide, there were 150+ Black-tailed Godwits present, with a few Grey Plovers, Dunlin, Knot interspersed, as well as 200+ Lapwings.
Unusually, in my experience, 30 Tufted Ducks and three Pochard were on the Breech Pool, whilst 20 Curlews were in the flooded fields and a male Kestrel was on the horse paddock fence. (TS)
Late this afternoon a male Marsh Harrier was about, along with two Sparrowhawks and a Kestrel, with a Kingfisher seen, too, whilst c80 Brent geese were in the harbour. (S&SaH) Marsh Harrier at the North Wall (CRJ)
East Side: A Sparrowhawk, a Stonechat, ten Goldfinches and a Reed Bunting were all along the path along the east side of the harbour this morning. (CRJ). 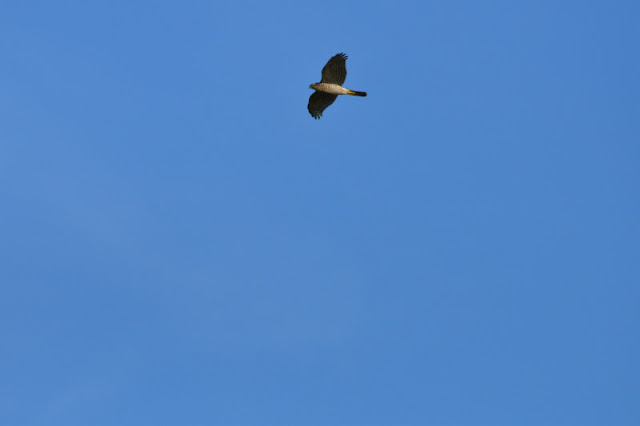 Sparrowhawk along the East side (CRJ) 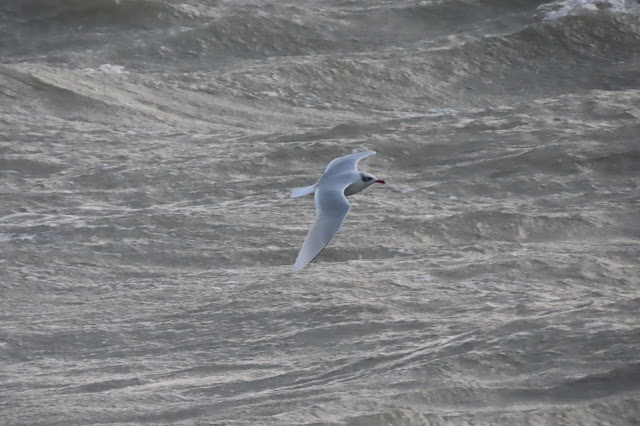 Mediterranean Gull at the Bill (AH)
Ferry Pool: A dozen Avocets were roosting at the back this morning, whilst two Snipe dropped in, but otherwise it was just ducks, comprising 16 Shelducks, a drake Gadwall, c80 Shovelers, c150 Teal, c40 Wigeon and 20 Mallards. (AH)
Also, a Jack Snipe flew out among a flock of 15 Snipe from the side of the Long Pool, viewed from the Tramway, late this morning, and two Swallows could be distantly seen over the sewage works. (AB) 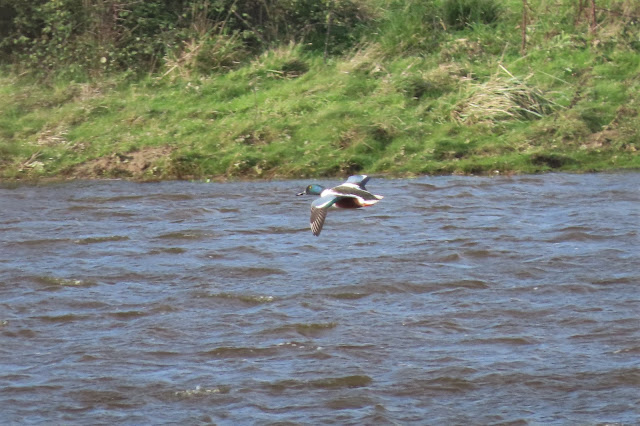 Shoveler (above), Teal & Avocets, Shovelers and Teal at the Ferry (AH) 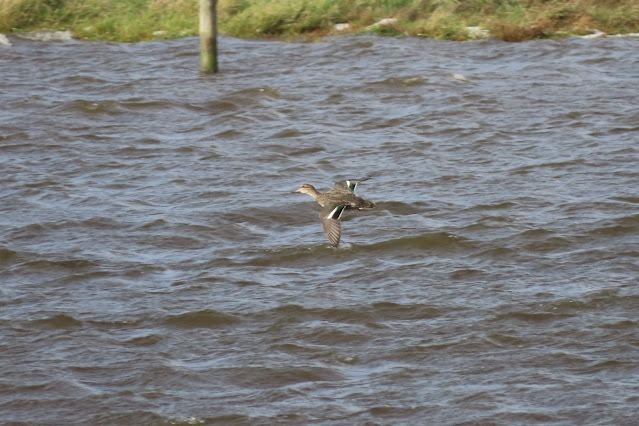 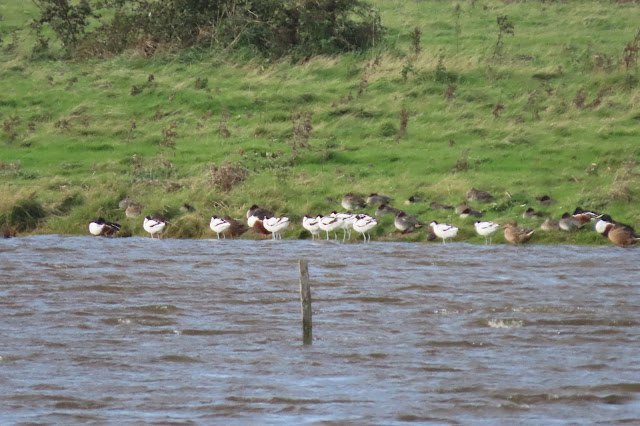 Church Norton: There was a huge roosting flock of 230 Grey Plovers on the beach this morning, with37 more in the harbour, along with 12 Turnstones, 30 Redshank, five Curlews, a Lapwing, 46 Oystercatchers, seven Great Crested Grebes,  50 Wigeon, 37 Teal and 33 Mallards
Land-birds were at a premium, but included a Chiffchaff by the hide, with three Jays, a Mistle Thrush, a Green Woodpecker, a Great Spotted Woodpecker, a Sparrowhawk and a Kestrel in the vicinity and 12 Skylarks and eight Meadow Pipits around the harbour. (P&LH)
Marsh Farm, Sidlesham: It was very quiet round all the fields and hedges, with just c20 Cattle Egrets with the cows by Marsh Farm and a handful with the sheep by Chalder Farm, and almost no small birds on show beyond a couple of Reed Buntings and Pied Wagtails and 20 or  so Chaffinches and Goldfinches. (AH) 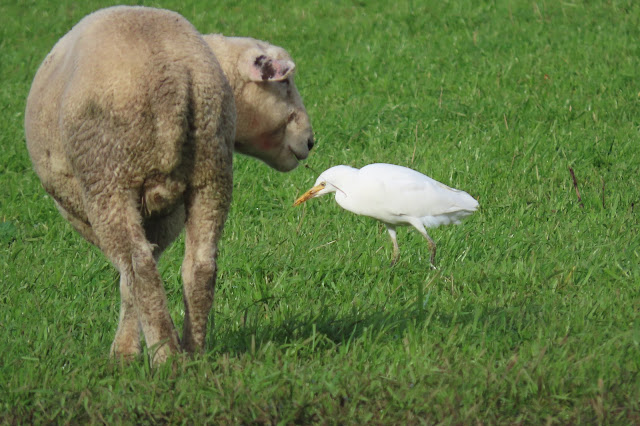 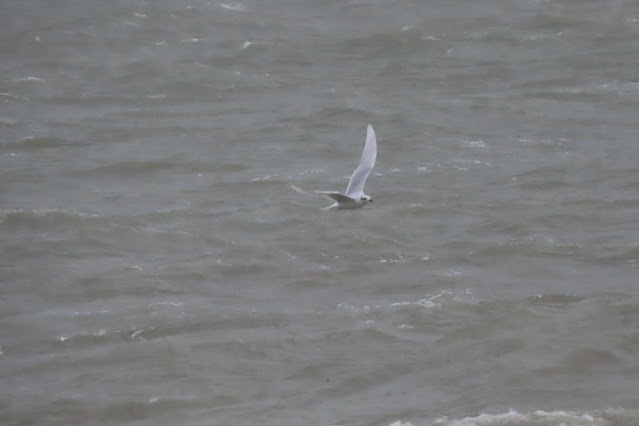 Mediterranean Gull at the Bill (AH)
Ferry Pool: A female Marsh Harrier was hunting the fields this morning, despite the rain, whilst on/around the pool there were two Egyptian Geese, 15 Avocets, c20 Redshanks, 14 Shelducks and 50+ Teal and Shovelers, and c200 Lapwings flew in from the harbour. (AH)
This afternoon there were two Marsh Harriers and five Swallows over the small reed-bed along the Medmerry Trail, just to the north of the sewage works. (TG-P) 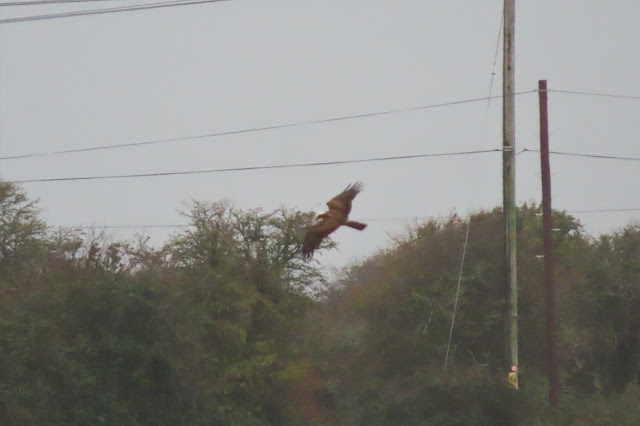 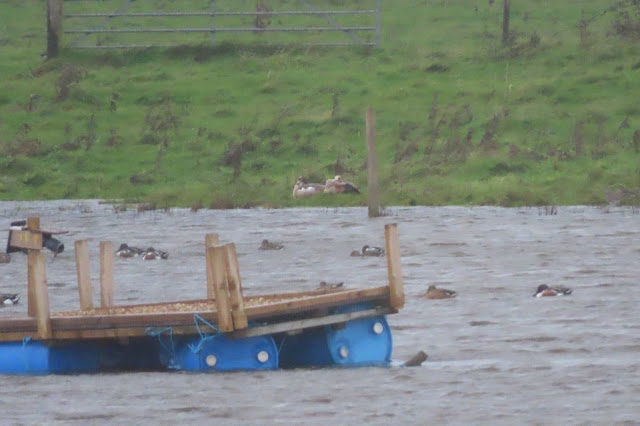 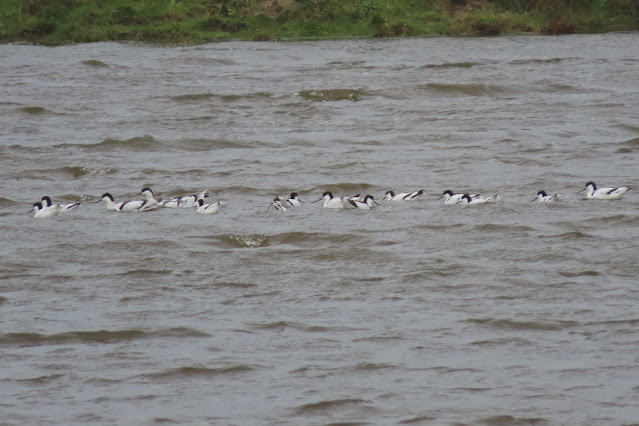 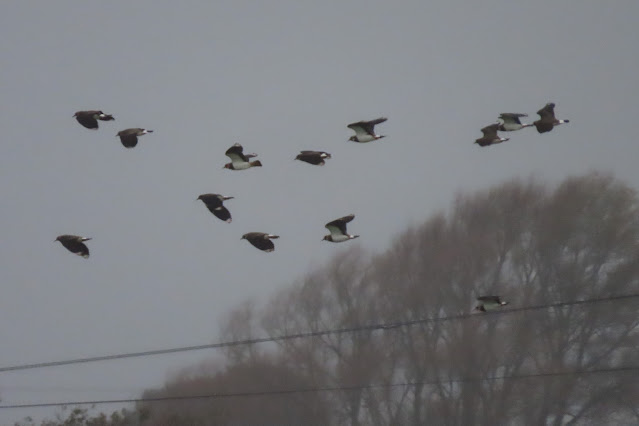 North Wall: A dozen Cattle Egrets were in the North Fields this afternoon. (TG-P)
Church Norton: Both a Merlin and a Peregrine were out hunting this morning, whilst a Kingfisher was along the sheltered side of the harbour, and c100 Brent Geese, c50 Wigeon and a few Pintail, Teal and Great Crested Grebes were on the water on the full tide, but again, there were next no waders visible.
At least 80 Linnets flew out from Tern Island, whilst two or three Chiffchaffs and Goldcrests were along the sheltered hedges, as were a few Chaffinches and Greenfinches, but the only bird seen in the churchyard was a lone Jay. (AH) 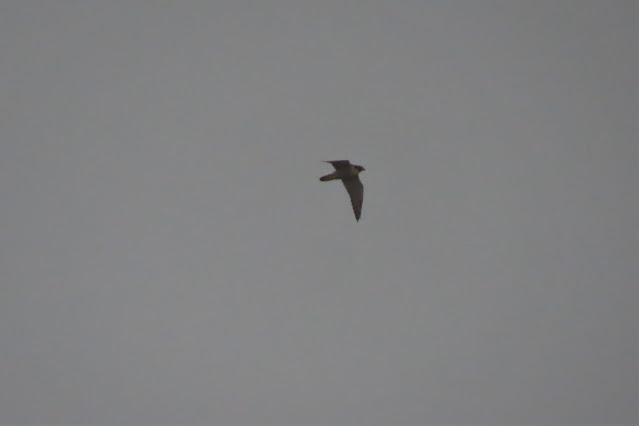 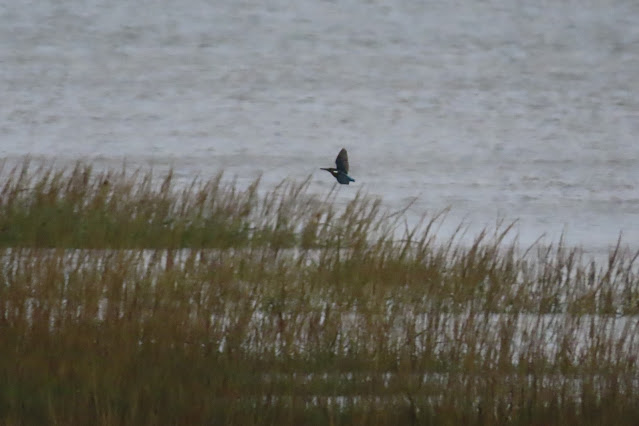 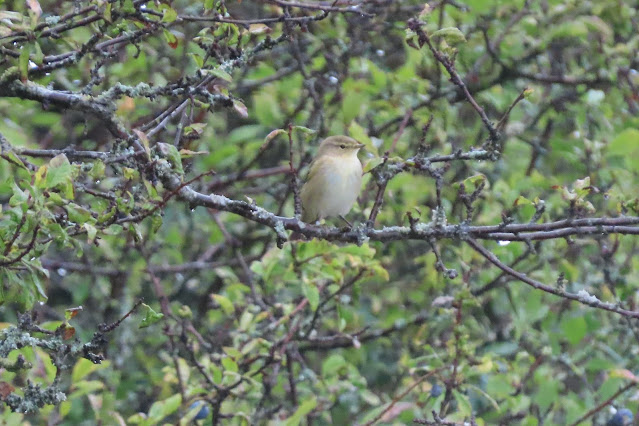 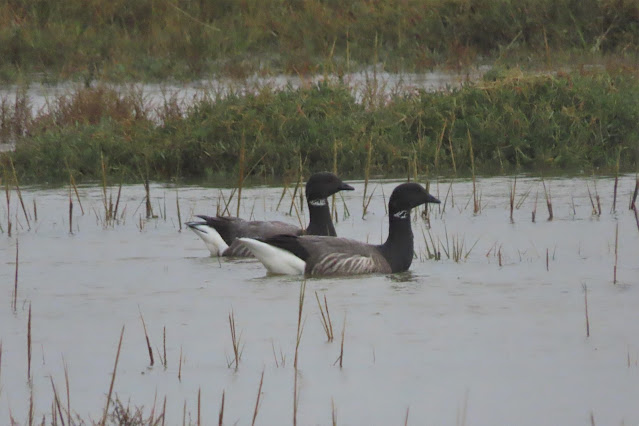 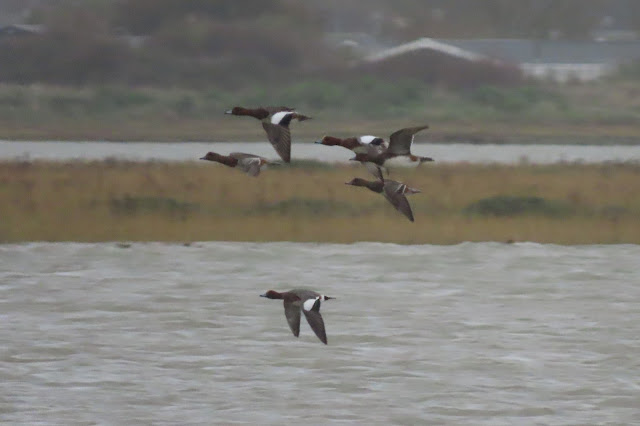 This species occurs annually on the Peninsula in small (and decreasing) numbers in autumn/winter, generally being seen offshore from the Bill or Church Norton. Occasionally one may appear within the harbour, as was the case with this showy bird which gave good views from Pagham Spit. (photo: Andy House)