Monday, 30th September: Similar weather today as for the last few days, and it also appears there will be a high over Scandanavia mid-week with a blocking low over Britain; surely a few eastern surprises should be coming our way soon? Meanwhile, today's news....

Pagham Hbr: North wall: Highlight a female Marsh Harrier (picked up by Pallis Callis) behind the Breech Pool, having a hard time from the local crows (the harrier that is!). On the pool, a Kingfisher, 16 Black-tailed Godwits, 14 Lapwing, 1 Ruff and 3 Snipe, whilst 8-10 Yellow Wagtails were amongst the cattle at Honer. Small groups of Meadow Pipits moving SW. In the harbour 12 Brent Geese, 140 Black- tailed Godwits, 3 Pintail and 2 Grey Wagtails. Note: There are workmen and a flapping tarpaulin on the roof of the old vicarage which are keeping bird numbers on White's Creek very low (JW).

Ferry Pool midday from the hide (raining, poor vis. and very little about): 1 Ruff, 9 Lapwings, 1 imm. Shelduck, 14 Teal, 1 Wheatear, 30 Stock Doves and loads of Red-legged Partridges dashing about the field at the back.  Returning home a couple of hours later the pool was empty except for a few Teal and the water level very low (SR).


Chi GP's: A necessary visit to the rubbish dump gave me the chance to check the Westhampnett North (Windsurf) pit but there was little to see except 16 Great Crested Grebes (of which 1 juv). I moved on to Ivy Lake where an hour's search again failed to locate the R-c Pochard. A small increase in common ducks was apparent, with a few more Mallard, 20 Tufted and 7 Common Pochard now present. Three Common Terns (1 ad, 2 juv) also put in an appearance and a 100 or so hirundines (Swallows and House Martins) were swirling around. A single Cetti's Warbler was calling and 8+ Chiffchaffs were also logged (OM).

Went to East Head this morning for a change: highlights were the 1st winter Spoonbill, still in Snowhill Creek, along with about 20 Black-tailed Godwits, 16 Golden Plovers in with the Lapwings on the fields, a loose flock of 11 Grey Herons flying over, about 200 Brent Geese in the harbour, a few Chiffchaffs in the bushes and a steady stream of Meadow Pipits and Swallows heading east (AH). 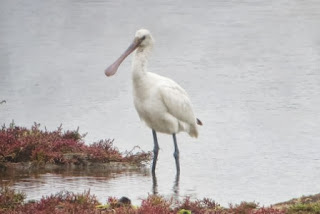 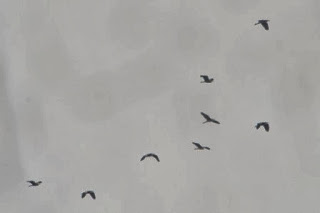 Spoonbill and loose flock of Grey Herons (here looking a bit like Poms?) at Snowhill Marsh (photos: Andy House)
After seeing a Spotted Flycatcher from my kitchen window this morning whilst cooking the porridge(still in the garden 3.15 pm) a text from AH confirmed the juv Spoonbill still present at Snowhill Marsh. The bird was still present late morning at the eastern end of the marsh. Whilst ‘scoping a flock of Brent flying west I picked up an Osprey over Chichester Harbour and watched it attempting to find a fish for 15 minutes (CRJ).

Sunday, 29th September: Overcast with a fresh easterly wind again this morning. No birding news yet today, updates awaited...but I begin with a few late items for yesterday. Apologies to my regular correspondents but these must have been received very late last night - is anyone else having problems with slow delivery of emails since BT adopted their super new log-in system of dropping Yahoo? 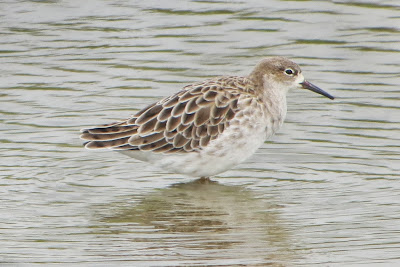 Church Norton early on produced a Merlin chasing Pipits along the beach and a Marsh Harrier over the Severals, with a steady stream of Meadow Pipits and Swallows/House Martins along the beach.
In addition to your report on the North Wall, there were 2 Ruff present (at different times, but a male and a female) and at least 4 Snipe on the Breech Pool, a Yellow Wagtail over and two young Grey Wagtails by the sluice, and a continuous easterly passage of Meadow Pipits and hirundines (AH).
(The Merlin was also reported by SH on his regular walk from Selsey - Church Norton).

An evening ride down to Honer Reservoir produced 1 Green Sandpiper, 1 Little Grebe and 1 Tufted Duck, c200 Black-headed Gulls following the plough but only 2 Med Gulls. Best was the ride back in the lowering sun accompanied by an adult Hobby along Honer Lane (CRJ).

Paul Bowley and myself made our first visit to Medmerry this morning, although you are still not allowed access along the Beach at Bunns Leisure. I must say it looks very impressive, do you know what the future access arrangements are and when it will be formally opened? Viewing from the Beach there were 4 Little Egrets on the pools, 3 Grey Herons flew over along with 8 Pintail. There was a Wheatear on the beach and a Kestrel roosting on a post. (IP)

I undertook the walk from Selsey to Pagham Harbour at the rather late time of 1pm, I probably saw at least 1,000 Swallows, plus 4 House Martins and 2 Sand Martins. There was a lot of variety on view, but nothing of any great relevance, the highlights were probably a female Stonechat on the bushes whilst walking across the farmland plus a Grey wagtail that flew over home and was then relocated at the back of Park Farm (IP). 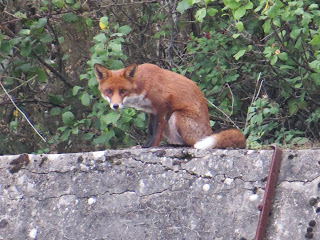 Another Fox shot; this one watching observers from the concrete wall at Church Norton (photo: S.Hill)
Honer Reservoir pm - 300 Herring Gull...300 B H Gull, 2 Little Grebes (CRJ). Again on the ride back I was accompanied by a Hobby feasting on all the Migrant Hawkers present; as I got to South Mundham it was joined by a second bird (CRJ).