Saturday, 12th July: Fairly warm and quite muggy this morning, with sunshine, some cloud and a light breeze. There is some possibly concerning news from Medmerry on the subject of the Black-winged Stilts (see below), though nothing is confirmed as yet.
Medmerry: No sign of any young Stilts this morning, I met SH at 7.15am as he was leaving, he had been watching the two adults for an hour with no indication of any young. I stayed until after 8am and was watching one adult for the entire time, again with no sign of any chicks. There were also 12 Little Ringed Plovers and 5 Dunlin in the area. (IP/SH)


Church Norton: The juvenile Redstart was showing again early this morning, along the path to the beach. Otherwise, passerines were few - three or four Chiichaffs, a couple of Blackcaps and a Whitethroat by the Mound being about it. In the harbout on the high tide there were three Whimbrel and a few Curlew about, but most of the interest was with the terns.- by a conservative estimate there were at least 50 Sandwich Terns, including quite a few youngsters, roosting in the harbour and there were at least 25 Common Terns about, many still buzzing around Tern Island, plus two Little Terns which came in to feed. (AH) 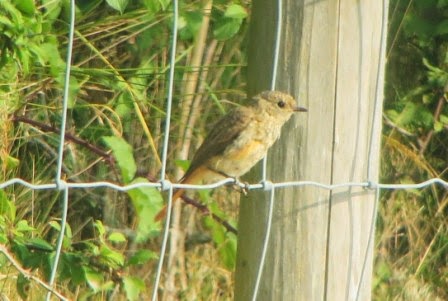 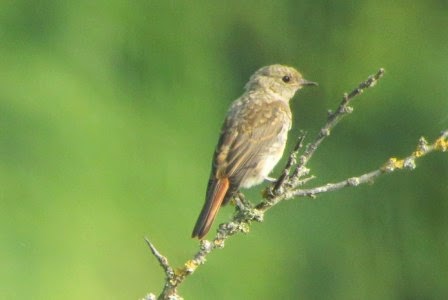 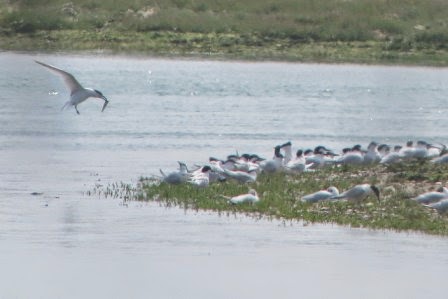 Ferry Pool: Once again the Ferry was full of waders, including the Spotted Redshank, 2 Greenshank, 4 Green Sandpipers, one Common Sandpiper, 9 Avocets, 10 Little Ringed Plovers, 30 Black-tailed Godwits, 25 Dunlin, 60 Redshank (including at least 2 chicks) and 75 Lapwing, and about 20 Sand Martins went over. (AH)
A Little Stint was present late morning, amongst the Dunlins and then at the back. (GK) 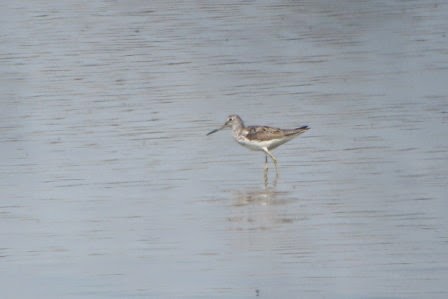 Greenshank (above) & Little Ringed Plover on the Ferry (AH) 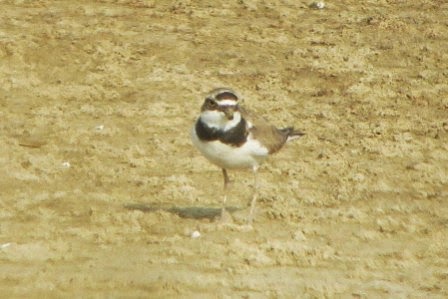 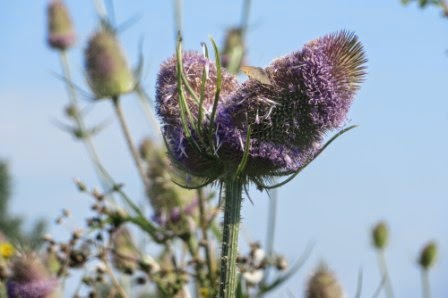 An unusual double-headed Teasel in the Discovery area (AH)
Pagham Spit/North Wall area: We went this morning to Pagham Spit as the tide came surging in. Sandwich terns were forever coming in from the sea with fish in their beaks which they took over to Tern Island. At 11.35 two female Common Scoter flew in from the sea and flew across the south part of the Harbour south west, but more surprising even than this was a juvenile Wheatear on, and even at the entrance to the hide, and from such a date we reckon it most likely is of local origin!
At high tide on the North Wall were three Common Sandpipers, two Little Terns and one Common Tern fishing, up to 22 Little Egrets at the back of the Breach Pool and 12 at least on the harbour island, and some 340 Curlew in the saltings. Sand martins and Swallows were skimming the harbour water and a Sedge Warbler beside our bench. (ARK per SOS)
Porthole Farm: Plenty of Linnets this evening - at least 50 about, mostly in a big mobile flock, plus 20 Sand Martins and a few Swallows over, a couple of Yellowhammers and Skylarks still singing and family parties of Goldfinch and Whitethroat. (AH) 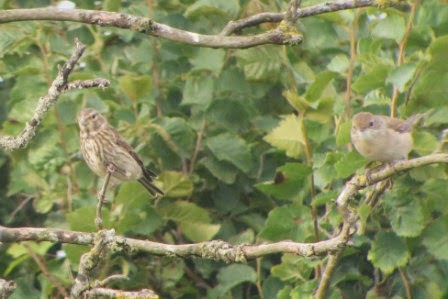 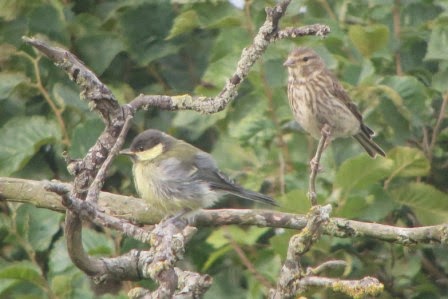 Friday 11th July: A morning that started bright and warm and ended very grey and windy with showers! Much of the interest in the last couple of weeks has centred around the Ferry Pool (with the notable exception of the Stilts at Medmerry!) and today just proves that at this time of year and into the autumn it is always worth checking the pool more than once, as waders present early on may not be there later, whilst others can and do drop in at any time.

Selsey (Coastguards area): A flock of about 50 Common Scoter was still present offshore, and 2 Eider were close in (BI). 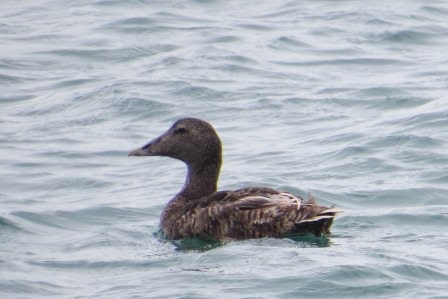 Female Eider off the Coastguard Station (BI)
Ferry Pool: No sign of the Spotted Redshank this morning, but still 9 Little Ringed Plovers, 4 Green Sandpipers, 20-30 each of Redshank, Lapwing and Black-tailed Godwit, 5 Teal and the creche of 20 young Shelduck. (AH) Later, the Spotted Redshank was re-located on the Pool, as was a Common Sandpiper, whilst a Curlew Sandpiper appeared with a small Dunlin flock (BI).

North Wall: One Common Sandpiper was on the Breach Pool (someone said two but I couldn't find the second) and a Common Tern was fishing there. A single Yellow-legged Gull was seen from the sluice (and plenty of thick-lipped Grey Mullet were feeding at the base of the sluice!) (BI). 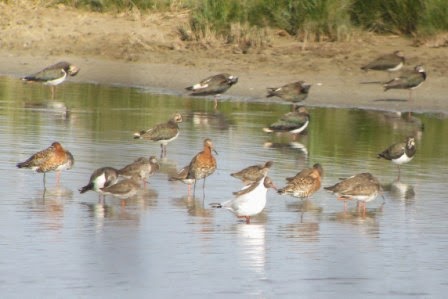 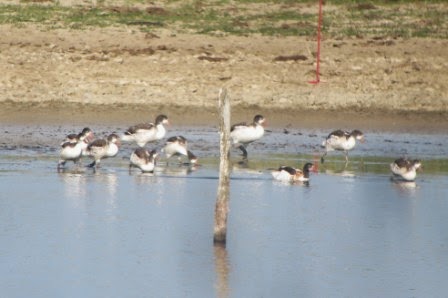 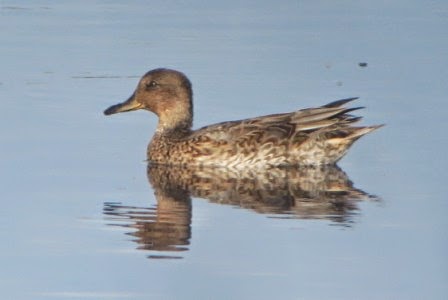 Medmerry: The adult Black-winged Stilts were still occasionally viewable in their usual haunt, but the chick(s) couldn't be seen. Rather fewer waders than of late - about a dozen Dunlin and 25 Black-tailed Godwits on the various creeks, 30 or so roosting Redshank and at least six each of Little Ringed Plover and Avocet (including two apparently still on eggs).

Around the breach a dozen or so Sandwich Terns and half that of Common Terns were busy feeding, and a Yellow-legged Gull was amongst the great Black-backed Gull roost. There were 50+ Sand Martins and House Martins over, at least 100 Linnets about, plus a few Meadow Pipits and Skylarks. (AH/SR).


There was also a Wood Sandpiper from Easton lane viewpoint at Medmerry this afternoon until it was disturbed by a fox, along with two Green Sandpipers.(BI) 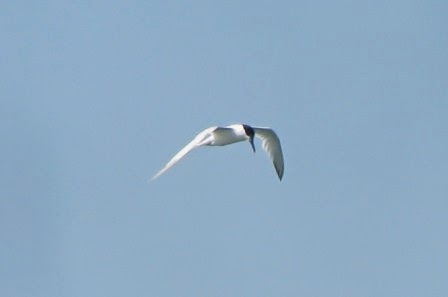 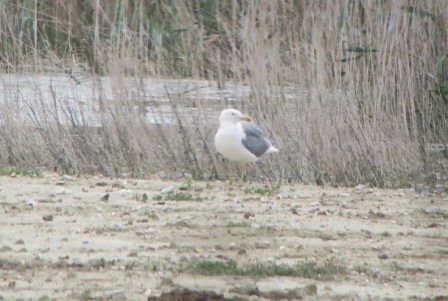 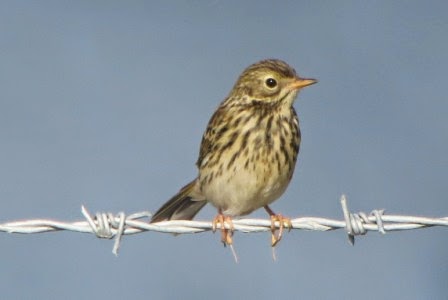 Church Norton: This evening there were three Whimbrel in the harbour, along with 30+ Curlews and at least a dozen Sandwich Terns. (AH) 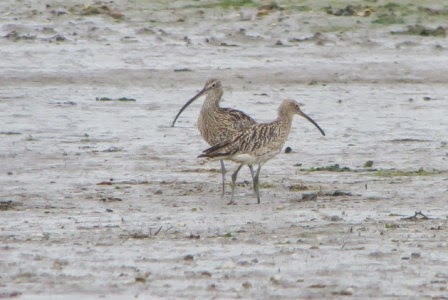 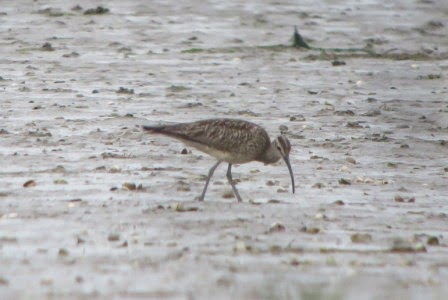 Thursday, 10th July: Cloudy with brighter spells and the risk of a heavy shower, but noticeably windier today with a fairly strong north-westerly keeping the temperature down. Becoming muggy, warm and quite humid by afternoon.

Selsey Bill: I guess it’s the usual July doldrums with much scratching of heads on where is the best place to go birding so we stuck to our usual routine. It was an odd day, one minute warm, then cooling when the sun went in, with a strong north-west wind. An hour's watching produced little - just a single male Common Scoter very close inshore and single Whimbrel west. Offshore a handful of Gannets with a few terns moving back and forth (BFF/DM).

Medmerry: The big day may be getting nearer! The female Black-winged Stilt was repeatedly flying up and doing loop-the-loops and calling this evening - trying to coax a ready-to fledge chick into the air, perhaps?
Also about were 200 Sand Martins over, a Common Sandpiper, a dozen Dunlin, 20 Black-tailed Godwits and two Little Ringed Plovers, plus a family of Avocets with three young. (S&SaH)
Not much bird news from Medmerry today - lots of Sand Martins heading southwards and c20 Little Egrets at least kicking around. 1 Circa 6 Little Ringed Plovers and singles of Common and Green Sandpiper, but no sign of the stilts at all.
But of other interest was a nice male Red-veined Darter by the open end of the ditch as you walk from the Earnley carpark at 1740 this afternoon. Lots of Black-tailed Skimmers over the pools and a couple of Emperors too - one of which snatched a Peacock (butterfly of course!!) out of the sky. Lots of Blue-tailed and Common Blue Damsels around also. (AB) 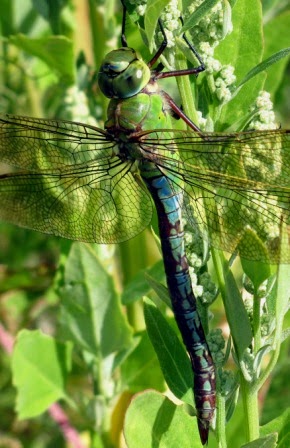 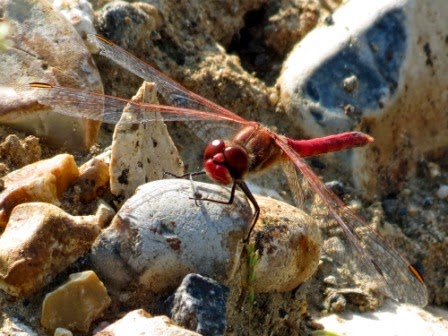 Emperor Dragonfly (left) and Red-veined Darter at Medmerry (AB)
Church Norton: Most surprising bird of the morning was a very young-looking juvenile Redstart on the hedge by the path to the beach. I thought it was a young Robin, but then it flicked its tail to show the rufous sides, before disappearing into the undergrowth with another flash of red.
In the harbour there were a group of six Greenshank together, along with two Whimbrel, 40+ Curlew, including the leucistic bird, and about 20 Sandwich Terns and one or two Common and Little Terns. Also 30-40 Sand Martins went over, with a few Swallows and Swifts, and a couple of Blackcaps had a brief go at some song. (AH)


Unfortunately, also some bad news to report......
Dorian and I were shocked this morning to find the hide at Church Norton severely damaged by vandals .They have kicked out several of the timbers on the west and east side causing considerable damaged to the overlapping boards. It looks as if they have been “smoking” as there are signs of papers and old lighter and other bits of rubbish etc in and around the hide. As it is stands at the moment it is going to take a lot of effort to sort this out and to repair the damage. It is going to be difficult as the damage will definitely let in the rain and wind causing the hide to be next to useless. We need to sort this out before carrying on with the proposed roof repairs. Very upset and disheartened (BFF/DM).
Let's keep our eyes and ears open......any info please to the Police or if not to OM/AH and we'll forward it. 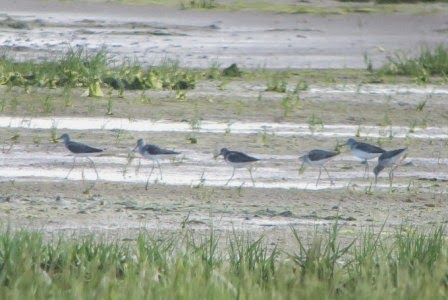 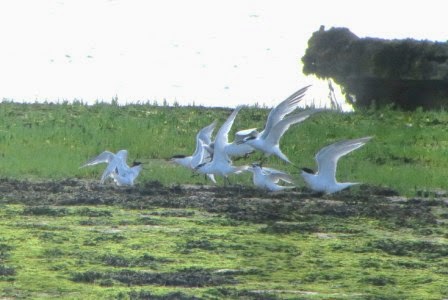 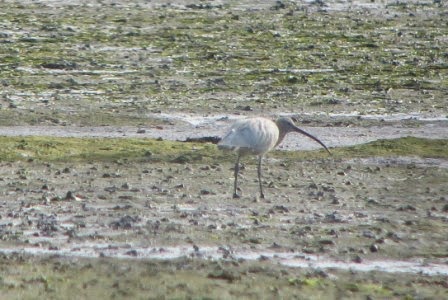 Ferry Pool: Still plenty of waders on the pool, but it is surprising how much the numbers of different species ebb and flow. This morning we were back up to 5 Green Sandpipers, but only 4 Little Ringed Plovers, there were at least 40 Black-tailed Godwits, but only 20 or so Lapwings. The moulting Spotted Redshank is still ever-present, though, as were Avocets and Redshank - 11 and 30 this morning, plus half a dozen Teal. (AH) 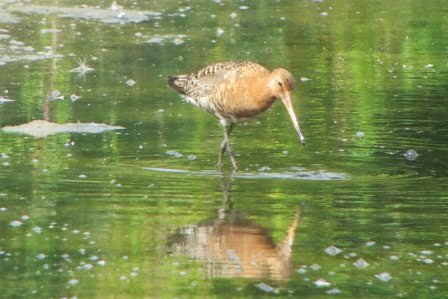 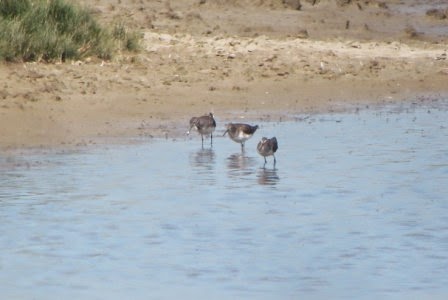 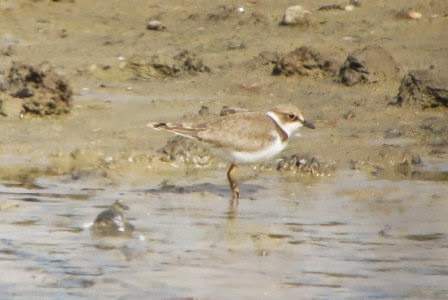