Friday, 18th July: A real scorcher is forecast today with high temperatures building, followed by severe thunderstorms overnight and into tomorrow morning..... however as so often on the peninsula the weather doesn't play out quite as predicted and currently a cooling and fresh onshore coastal breeze is prevailing... we'll see how the rest pans out! Meanwhile, I note from the SOS website records section that a couple of BBRC decisions have now come through that affect us. Firstly the Iberian Chiffchaff at Apuldram (2012) has been rejected - to the surprise of no-one involved - so we can only hope that new criteria for this cryptic species may one day emerge causing the record to be re-considered. Secondly, there is better news on the Western Bonelli's Warbler from Church Norton (2013), which has been accepted and so becomes our latest addition to the Peninsula List ... well done to all involved on that one! (OM). At Medmerry, all five Black-winged Stilts were still present this morning (see Medmerry report below) but whilst on this subject, the RSPB warden Pete Hughes needs to get together a band of volunteers to help monitor the birds at Medmerry, particularly needing someone to regularly carry out the WeBS (Wetland Bird Survey) Count. This is a great opportunity to really get to know the reserve and it's avian visitors. He can be contacted on peter.hughes@rspb.org.uk .
Ferry Pool: There were six Greenshank this morning, along with five Little Ringed Plover, the Spotted Redshank, a Common Sandpiper, 12 Avocets, 30 Dunlin, 10 Black-tailed Godwits and a dozen Little Egrets. The juvenile Redshank in the corner by the road is still doing fine. (AH) Four (of six) Greenshanks and a Little Egret (above), juvenile Redshank & juvenile Little Ringed Plover on the Ferry (AH) 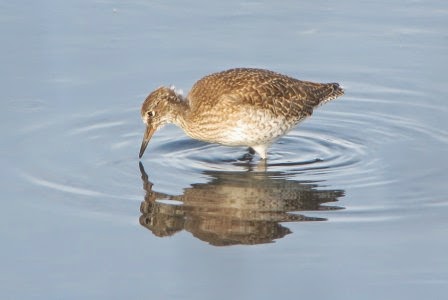 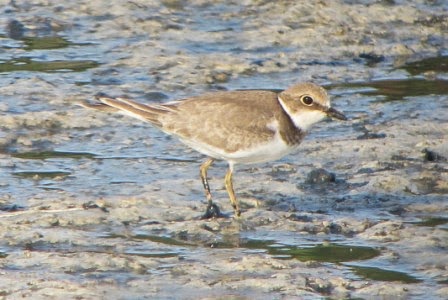 Medmerry - (breach area): A bit of a tern bonanza here this morning - with the best news of all being that there were a minimum of three, and possibly four, juvenile Little Terns amongst the ten or so present. Presumably - and hopefully - they have come from Pagham Spit. There were also at least ten Sandwich Terns, including several juveniles, and half a dozen Common Terns on the mud or feeding offshore. Otherwise, there were not many waders about - roughly a dozen each of Grey Plover, Dunlin and Turnstone, plus a couple of juvenile Redshank, the anti-social female Eider was in the breach; also a single Mediterranean Gull with the Black-headed Gulls and two or three Gannets offshore. (AH)


Bracklesham side: An early visit this morning to avoid the heat.  Warden Pete Hughes was walking back across the fields where he'd been trying to photograph the Black-winged Stilt chicks, a job easier said than done! He'd managed to see two of the chicks as they took flight and was relieved when we had distant views of all three from the beach.  While Pete was out there he'd also seen a Wood Sandpiper in with some Greenshank, and confirmed there were plenty of Grey Plover, Black-tailed Godwits and some Teal.  Close to the Stilts were a pair of Avocet with two young, causing a lot of altercations between the parents of both species.  On the Stilt Pool one pair of Avocets were preparing to walk their chicks across to the main reserve, being very vocal and close to the fence. Another Avocet sat patiently on her nest, and two Little Ringed Plovers were seen with two chicks (SR). 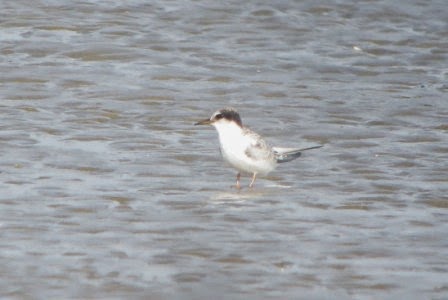 Juvenile Little Tern (above) and its parent at Medmerry (AH) 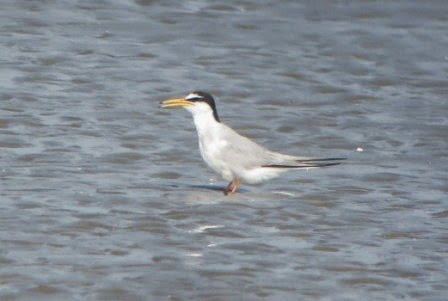 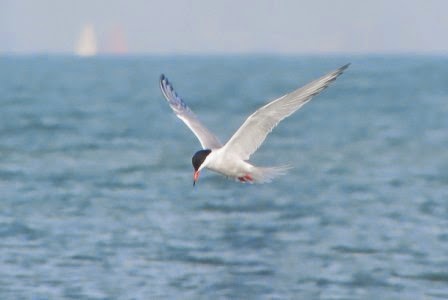 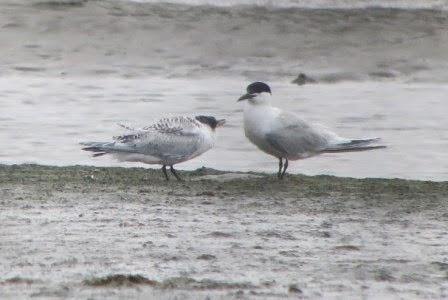 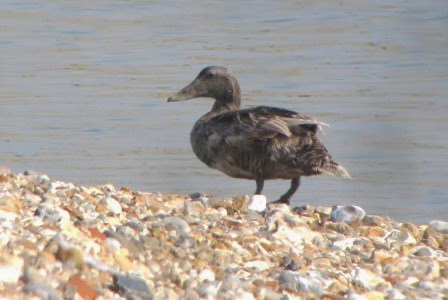 Pagham Hbr: North Wall: A late morning visit, where despite the humidity there was quite a fresh breeze. The Breach Pool was as dead as usual, just 8 Lapwing on the margins and 2 Black-tailed Godwits over-flying but unable to land; otherwise just 8 Teal, a single Tufted Duck, 13 Canada and 4 Greylag Geese made up the tally, with several Reed Warblers in the reeds. It was a little better along the East side/White's Creek, with a bit of a gull selection, although the bright sun and heat haze made for tricky viewing conditions; 12+ Great Black-backeds of varying plumages, 6 Lesser Black-backs (5 ads 1 juv), a single Common Gull (ad), 8+ Yellow-legged (of which 6 ads, 2 sub-ads and a juv-type I couldn't clinch as it wouldn't move from its slumbers), c.15 Herring, and a roost of 150+ Black-headed and 3 Mediterranean. Also logged were 13 Black-tailed Godwits, a Greenshank, c. 30 Curlew, 20 Redshank and a dozen Oystercatchers. The Swallow families were making use of the wires in Church Lane in a scene more reminiscent of autumn (OM).

Pagham Lagoon: A Common Sandpiper was along the margin on the lagoon, but otherwise it was standard fare, with about 15 Tufted Ducks, c.25-30 Little Grebes and Coot numbers beginning to increase (OM).

Thursday, 17th July: High summer: sunny and very warm today with light breezes, but with temperatures set to increase and the threat of heavy thunderstorms by the weekend. In case anyone missed yesterday's late update from Medmerry, all three Black-winged Stilt young and their parents are still present.... the young look two thirds the size of the adults, but in flight much the same size (SH/AH).
Ferry Pool: Still a lot of birding activity this morning, including the five Greenshanks, the Spotted Redshank, six Little Ringed Plover, ten Black-tailed Godwits, 30 Dunlin and plenty of Redshank, Lapwing and young Shelduck. There were also a total of 16 Little Egrets, mostly sat in a row on the mud. (AH) 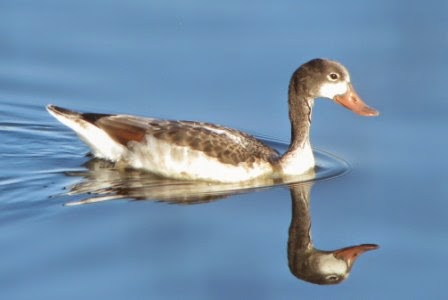 Young Shelduck (above), 11 (of 16) Little Egrets on the Ferry and an idea of just how much bird-life is on there. (AH) 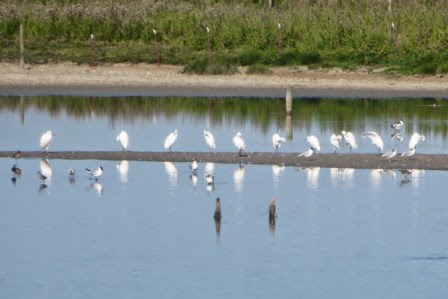 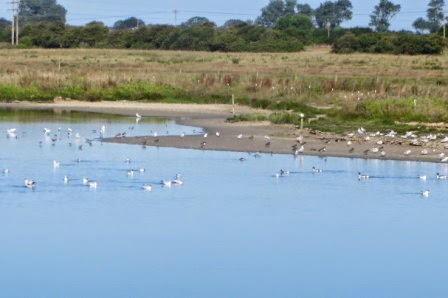 Medmerry: All five Black-winged Stilts were in view this evening from the beach (C&ME)

Coastguard Station: The big flock (c 150) of Common Scoter and a few Common and Sandwich Terns were offshore, and a tight group of about 20 Swifts went screaming over low. (AH) 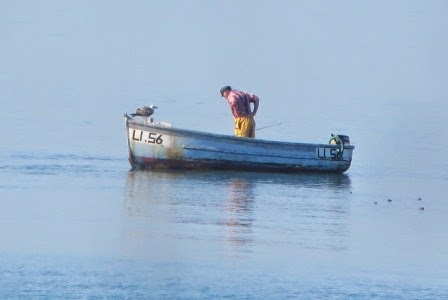 A fisherman and his friend & Common Scoters off Medmerry (AH) 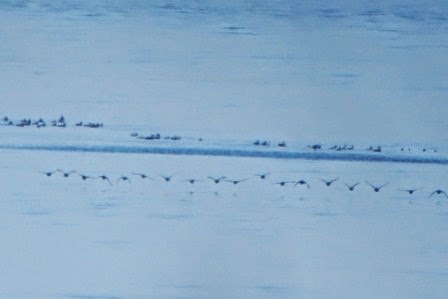 Church Norton: There were still three Whimbrel and a dozen each of Common and Sandwich Terns in the harbour. There were a pair of Ringed Plovers on the beach with a small chick and five Dunlin, too, and there was a big feeding flock of Common, Sandwich and at least half a dozen Little Terns off the exposed spit on the low tide. (AH) 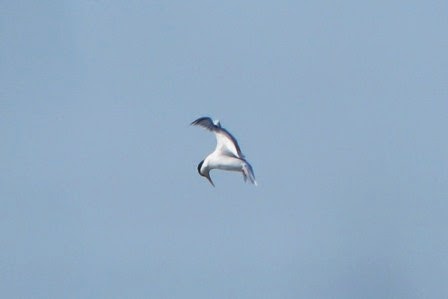 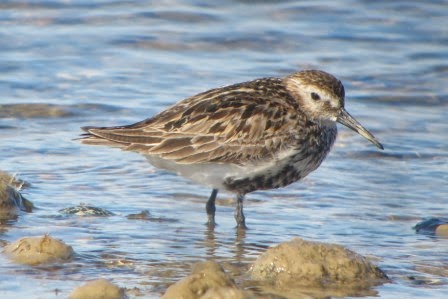 Wednesday, 16th July: Another fine summer's day with just a light SW breeze and the prospect of a very warm spell over the next 48hrs. As we start the second half of the month we should see returning waders beginning to arrive with some regularity, when hopefully something more unusual might drop onto the Ferry Pool, perhaps accompanying the Dunlin flocks. And talking of Dunlin, yesterday's flock was a timely reminder of what lies ahead..... easy enough now when they all have black bellies and are of fairly similar size, but as the season progresses they can be a challenge for both the novice and the old hands alike. Some birds with pale bellies stand out from the crowd and with different races passing through that vary in size from about Curlew Sandpiper down to almost Stint size, and with variable bill sizes, they can be a trap for the unwary. It will be interesting to see how things develop (OM).
Ferry Pool: There were five Greenshanks this morning, all actively feeding. Also the Spotted Redshank was back, looking mostly in winter-plumage now, along with 8 Little Ringed Plovers, 30 Dunlin, 6 Little Egrets, 8 Avocets and 30 Lapwing. (AH) 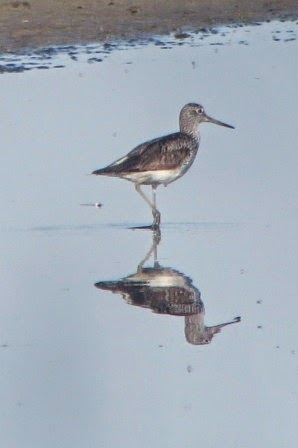 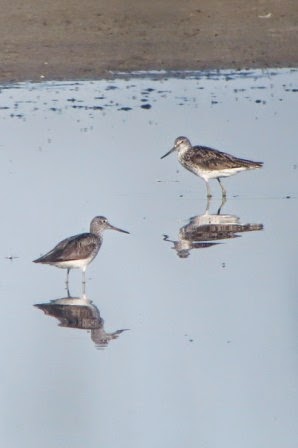 Greenshanks (above) & Spotted Redshank on the Ferry (AH) 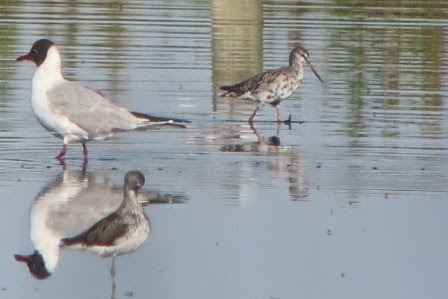 Pagham Spit: There was still plenty of encouraging activity around the Little Tern colony, with at least a dozen birds seen, and plenty of fish being brought in. A few Common and Sandwich Terns were coming and going from the harbour, and again, some were bringing fish back. On the spit there was a brief Grey Wagtail and a family of Skylarks, and in the harbour there was a drake Common Scoter, three Great Crested Grebes, a Yellow-legged Gull, 20 Sandwich Terns and a Brent Goose that flew over to the Church Norton side.(AH) 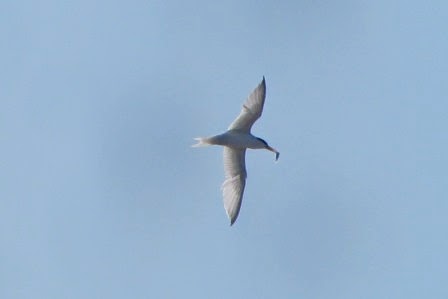 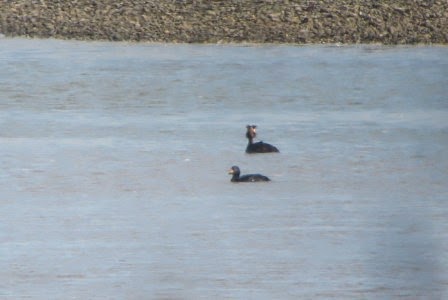 Pagham Lagoon: On the water there was a drake Pochard, 8 Little Grebes, 10 Great Crested Grebes, including two young chicks and 25 Tufted Duck, and 20 Sand Martins flew over. (AH) 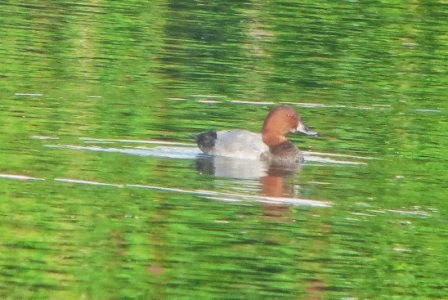 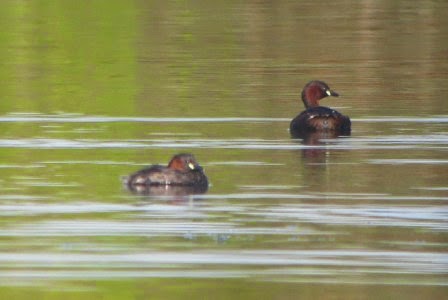 Medmerry: All three juv Black-winged Stilts seen this evening;  two flew 200 metres east with an adult, later the other juv flew over to them. Both adults were present on the ground and the young look two thirds the size of the adults, but in flight much the same size (S&SaH).
Posted by Birderowen at 09:01