Friday, 6th February: Another bitingly cold day in the strong NNE wind, but plenty of sunshine if you can find some cover....
however, that of course assumes you are lucky enough to be out birding: sadly, after fighting a domestic rearguard action for a year or more, the dreaded D-word has come to pass - yes it's Decorating time for me - whoopee, just hoping it will all be over by spring!!(OM)

Selsey: Park Farm - A strong icy wind blowing across the open fields.  No sign of the Green Sandpiper, probably because the reservoir was still frozen, although the Grey Wagtail was commuting between ditches along with two Pied Wagtails.  A Sparrowhawk was present and a Grey Partridge was at the field edge in the company of a Red-legged Partridge, and the resident family of roe deer were keeping well out of the wind (SR).

Farmland North of Pagham Harbour: I spent the morning looking around the farmland north of the harbour, and saw a good selection of birds, albeit nothing particularly rare.

Bramber Farm area - A pair of Grey Partridges were around the road to the farm, and at least a dozen Yellowhammers and a couple of Reed Buntings were in the hedgerows, along with half a dozen Song Thrushes and a pair of Jays, and there were 20 Stock Doves were amongst several hundred Wood Pigeons. 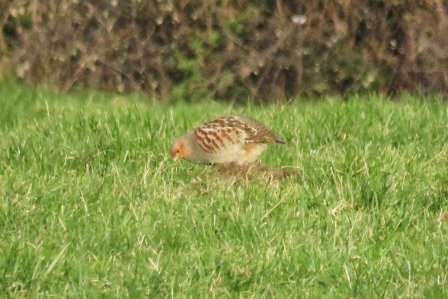 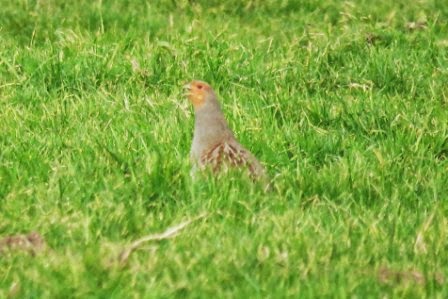 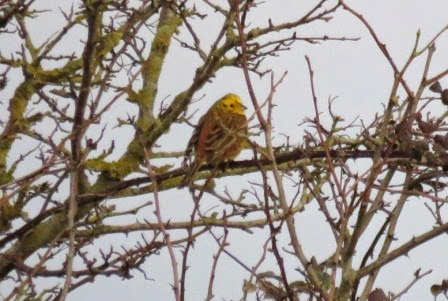 Marsh Farm area - There was a huge mixed flock of birds in the grassfields north of the buildings, including 1200 Brent Geese, 160 Black-tailed Godwits, 80 Curlew, 150 Lapwing, several hundred Starlings and several Mediterranean Gulls amongst the commoner gulls. There were also a dozen Song Thrushes and a couple of Reed Buntings in the hedgerows, and 20+ Pied Wagtails around the buildings. 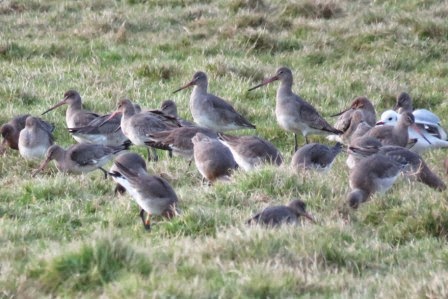 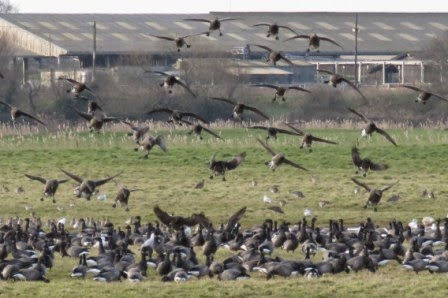 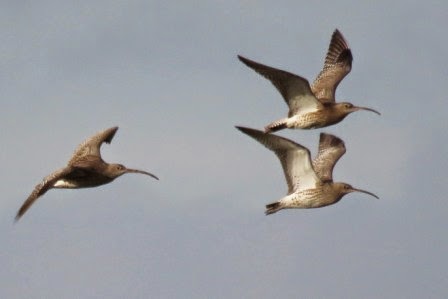 Chalder Farm - There was a lot of activity around one unfrozen water trough in the big field east of the farmhouse, including a Grey Wagtail, four Pied Wagtails, a Chiffchaff and a pair of Stonechats. 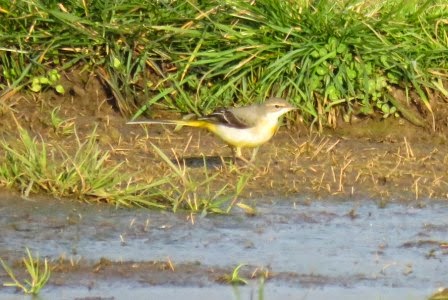 Brimfast Farm - There were 20+ Skylarks in the big rape field just south of the golf course and, bizarrely, a Kingfisher flew the length of the field before dropping into the rife. There were another pair of Grey Partridges here, too, plus a single bird, as well as another pair of Stonechats, a further half dozen Song Thrushes and Reed Buntings in the hedges, and a Buzzard over. (AH) 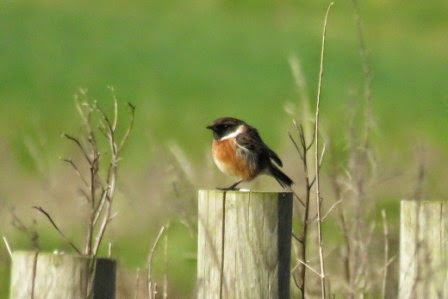 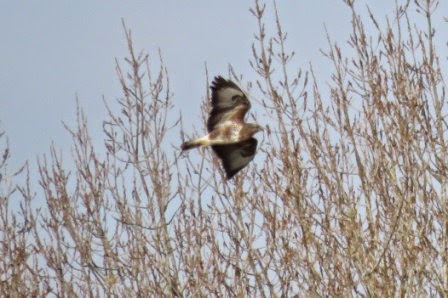 Selsey Bill: A quick look from Hillfield Road suggested not much going on offshore, but a handsome Fox was out for a stroll along the beach! (AH)

Selsey:  A Green Woodpecker flew across the road in front of my car close to Rectory Lane (SR) 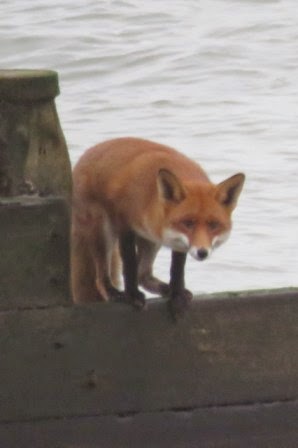 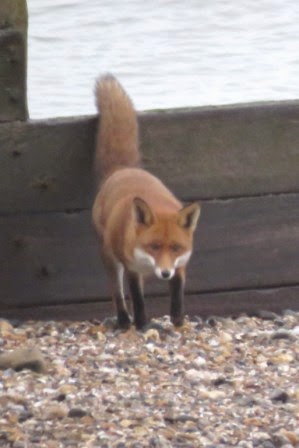 
Medmerry: Windmill-Breach-Chainbridge Field - Not much to report from the Windmill round to Chainbridge Field. Offshore there was a Great Northern Diver, around a dozen Red-breasted Mergansers and the regular flock of 20-30 Common Scoter. Very quiet around the breach - just a few Curlew and Grey Plover, plus 40 Shelduck and 10 Teal on the pools. Along the path beneath the bank there were two Dunlin and a Ringed Plover on the puddles, a pair of Stonechats, a flock of a dozen Goldfinch and one or two Skylarks, Meadow Pipits and Pied Wagtails. I walked back through the caravans, but it really is a barren environment. (AH) 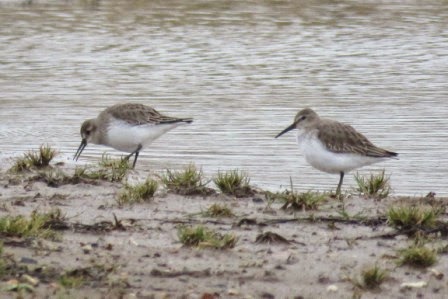 Dunlin (above) & Goldfinches at Medmerry (AH) 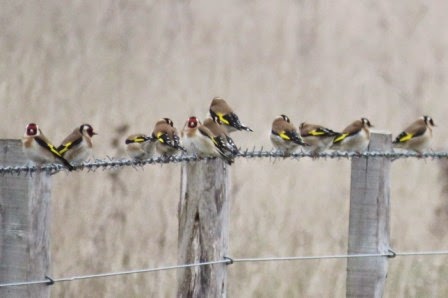 Church Norton: Plenty of the common waders and wildfowl in the harbour, including 15-20 Avocets at the far end of the main channel, and a few Pintail in with several hundred Wigeon, and a pair of Teal were in the moat of the Mound. (AH) 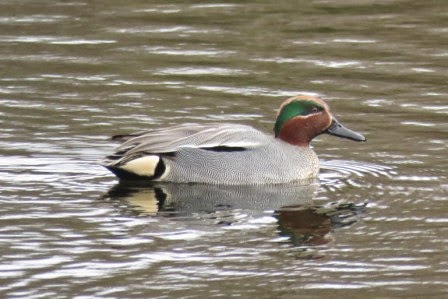 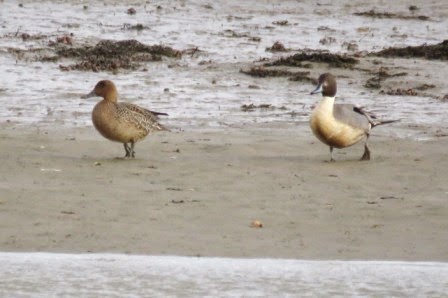 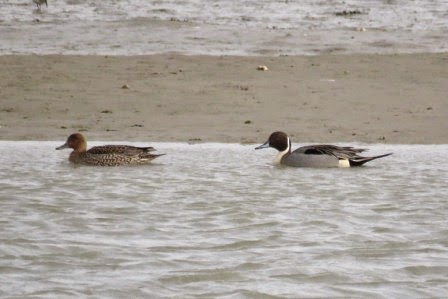 Wednesday, 4th February: Similar weather to yesterday; dry but very cold and grey with the chance of some sunny periods later and a biting N/NE wind persisting, though fortunately not yet too strong. However, with temperatures set to barely climb above freezing all day, the wind chill factor is likely to make things feel considerably colder..........
Meanwhile, something perhaps to get you a little hotter under the collar..... inappropriate development! It seems Selsey is always in line for more than its fair share of this, but it also affects much of the Peninsula (and indeed the South-east). I don't wish to become embroiled in politics, but it's hard not to, as it does seem at present that it's a bit of a Developers Charter, with any scheme worth a try and Councils trying to dump their quotas on certain areas and away from their more 'precious' village areas - and rarely ever do wild places and bird habitats get a look-in for such protection. Quite apart from the mass of new housing and an Asda store waiting to despoil the area, we now learn of three more proposals: development of Park farm turkey sheds, a massive plan to cover 80 hectares of farmland with large Poly-tunnels (like plastic greenhouses) in the fields at the back of Church Norton (ref:14/04310/FUL) and a massive Solar-panel farm at the end of Golf Links lane close to Chainbridge field (ref: 14/03944/FUL). There is also another one planned for Baker's Farm, Sidlesham, which is the fields around the tall mast just north of Ferry Field.
Readers are urged to object to these proposals by writing/contacting Chichester District Council - and time is of the essence as deadlines for objection are approaching. Local resident and objector Christine Hayman has commented' Councillors are appointed (and more importantly reappointed) by local people so the greater the groundswell of objection, the more likely it is they will latch on to any point they can as breaching the Government's National Policy Framework or the Local Plans created by CDC etc.  The CDC Planning Officer will guide them towards whether the planning framework or rules are in breach or not, but there is usually some degree of subjectivity so the more ammunition which is recorded as a matter of public record, the better chance we have of gaining support from the Council members.'You can bet these plans won't be only ones, so do what you can. What price nature? (OM).

North Wall: Plenty of birds around, but nothing much out of the ordinary - even the Raven flying about cronking over the trees at the back is becoming familiar sight! On the Breach Pool there were c40 Black-tailed Godwits and c60 Teal, plus a few Redshank, but not much else. Along the side of the harbour there were another 80 Black-tailed Godwits and 120 Golden Plover in with 500 Lapwings, and similar of Wigeon in the channels, and a single Bar-tailed Godwit was on the mud. (AH) 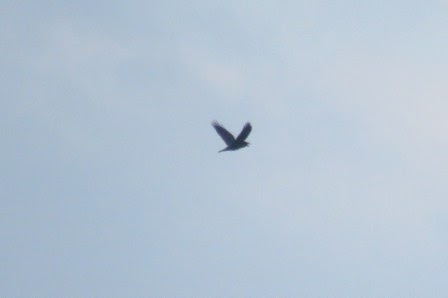 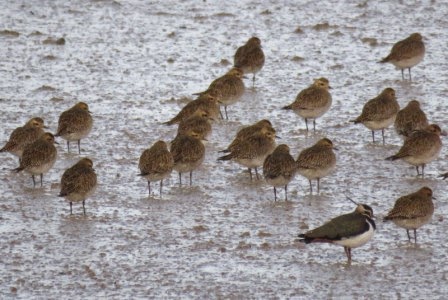 Later on there were 22 Linnets in the ploughed field adjacent to Church Lane, and on White's Creek there were a few Dunlin and Black-tailed Godwits along with 170 Wigeon and 30 Teal, with 340 Lapwings roosting alongside.
The Breach Pool was largely frozen but there were 60 Teal and lesser numbers of Mallard and Wigeon, with waders represented by 27 Black-tailed Godwits and 2 Common Snipe, whilst a Water Rail was in the near reeds.
In the harbour in front of Owl Copse there were 15 Pintail feeding on the mud, a Raven was present in the fields north of Honer Farm, and there were 6 Roe Deer and 2 Brown Hares in the fields near Marsh Farm. Signs of spring on its way included the Gorse colouring up an otherwise dull landscape, and the first Grey Heron  back on nest renovation duties in Owl Copse. (JDW) 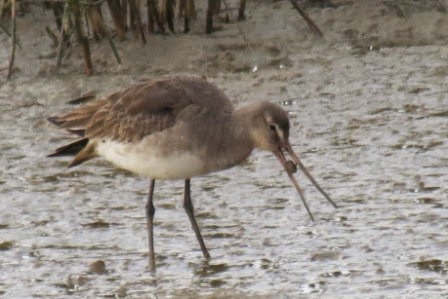 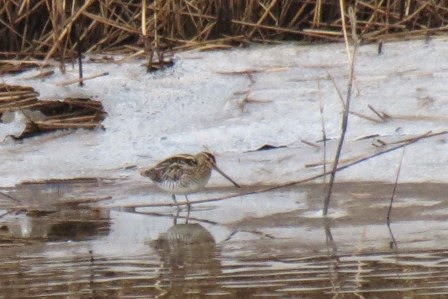 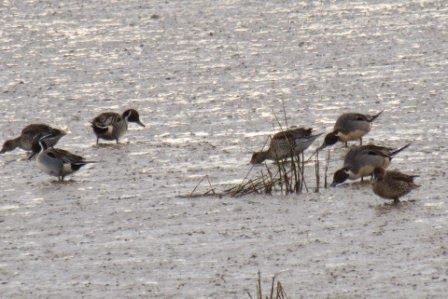 Pagham Lagoon/Slipe Field: There were two pairs of Goldeneye and eight Pochard on the water, plus the usual Tufted Ducks and Little Grebes, but not much else.
A walk back through the Slipe field was surprisingly unproductive - just a Snipe, three Reed Buntings, 30 Linnets and 200 Wood Pigeons and a single Stock Dove in all the cover-cropped area. (AH)

Ferry Pool: A quick look produced at least 500 Wigeon, 300 of which were on the water. Also 150 Golden Plover went up with the Lapwing, and there were c80 Black-tailed Godwit present. (AH) 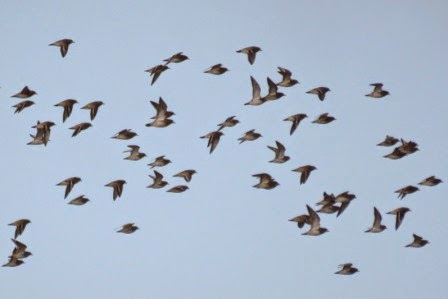 Golden Plovers over the Ferry (AH)

Chichester Gravel Pits: The Tundra Bean Goose was still with c30 Greylag Geese in the field behind the East trout Lake. (AH)
At Drayton Pits nothing scarce, but Shovelers were the order of the day, with a minimum count of 154, including a single flock of 130 - presumably a cold weather influx. Other wildfowl included 80 Tufted Ducks, 80+ Gadwall and 90 Pochard, plus 6 Great Crested Grebes. I didn't attempt to count the several hundred Coots (!) but some were getting pretty aggressive to each other and at least two were observed carrying weed and apparently involved in the early stages of nest-building. Other sightings included 13 Snipe, 6 Song Thrushes, 2 Chiffchaffs and 2 Jays (OM). 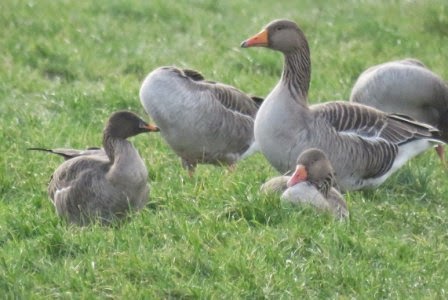 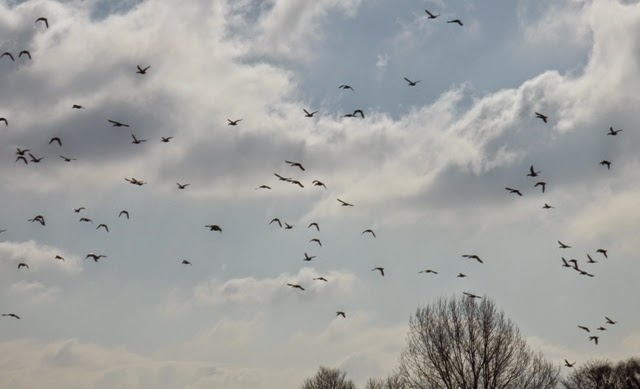 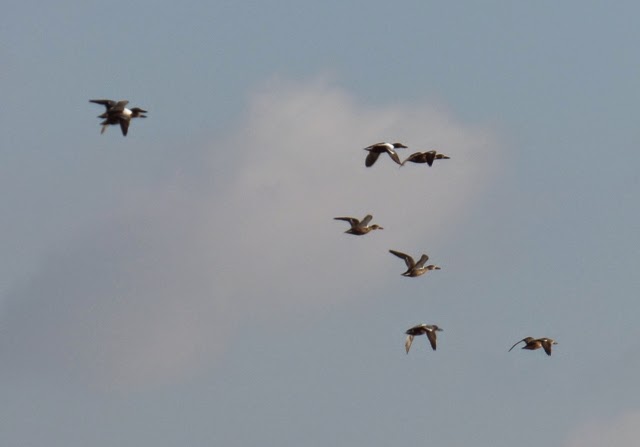 Snowhill Creek: A quick look late this morning produced a Coal Tit in the gardens along Roman Landing on the way down, and the three Spoonbills were still there and....wait for it....one was actually awake!


A single Greenshank was out on the marsh and the best of the roosting waders and a Chiffchaff was in one of the bushes out there too. Other than a male Sparrowhawk bombing along the beach, it was just the usual fare, but the Wigeon and Teal looked lovely in the sunshine! (AB) 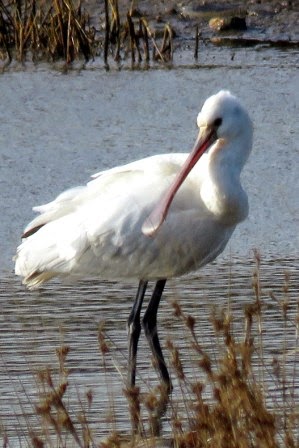 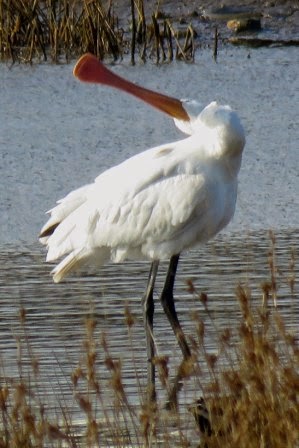 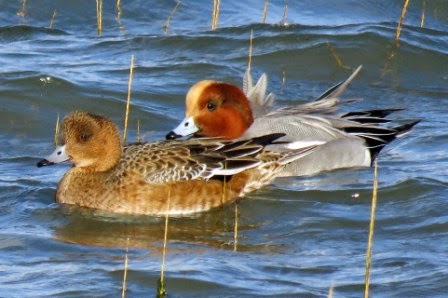