Monday, 9th February: We appear to have got the weather we were forecast for yesterday this morning! A little milder, but very grey and still....and pretty cold at first, gradually warming and brightening through the day.

Selsey Bill (0800-0930hrs): Cool, grey but calm with a flat sea. Wind NW2. (Obs: AH/OM)
Almost nothing moving again as the wind dropped - a Gannet and a few Brent Geese west being the lot, but there were ten Great Northern Divers on the sea, along with the regular Eider and three Red-breasted Mergansers, plus there was a Mediterranean Gull and a couple of Sanderlings about. Log below:
Great Northern Diver - 10 os
Great Crested Grebe - 2E
Gannet - 1W
Brent Goose - 3W
Eider - 1 os
R/b Merganser - 3 os
Oystercatcher - 10 ob
Sanderling - 2 ob later moved off E
Mediterranean Gull - 1 os flew N inland

Selsey (West) - Coastguards there were 2 Great Northern Divers and 6 R/b Mergansers offshore; also a single Sanderling flew W (presumably one of the birds above) (OM). 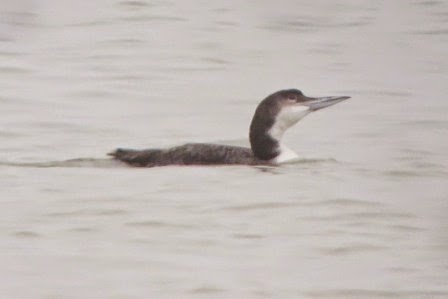 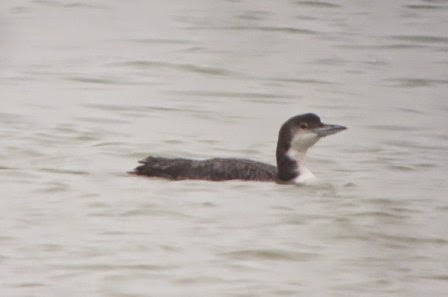 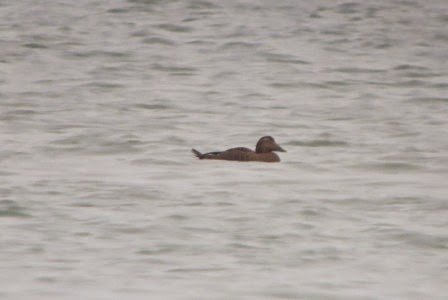 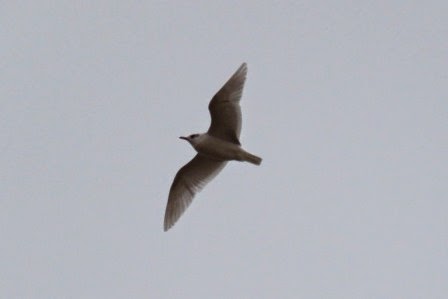 below: studies of the photographer's art as displayed at the Bill by AH, my esteemed co-editor (OM)...... 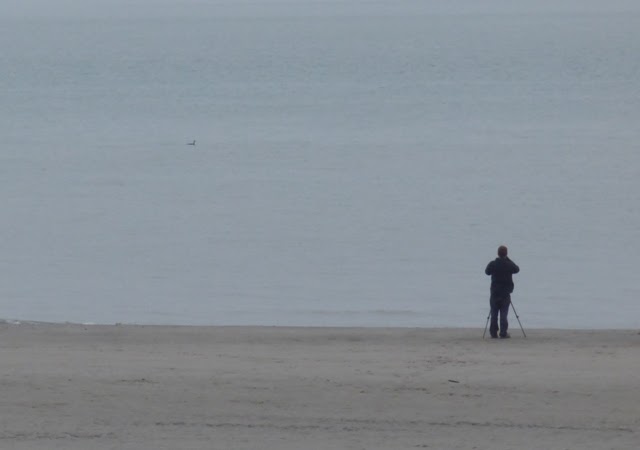 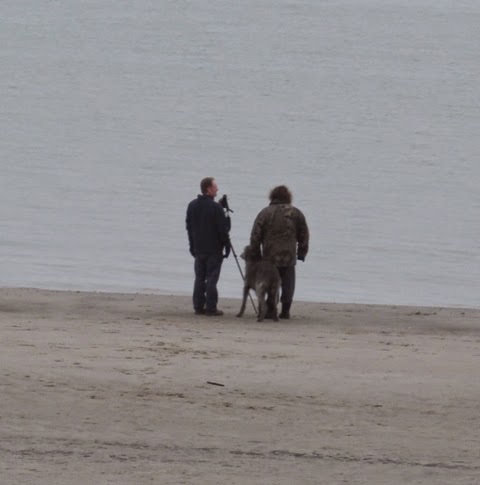 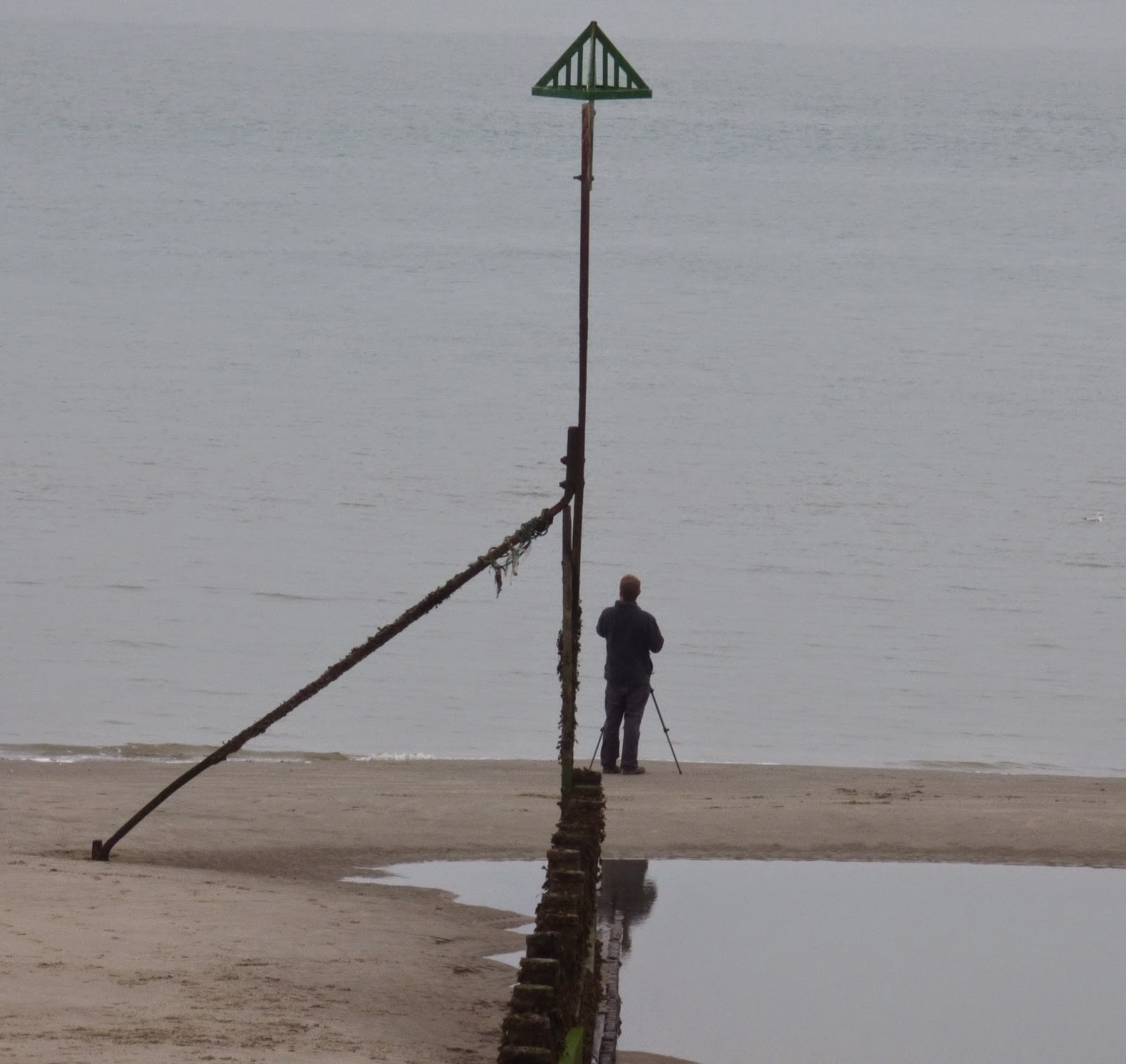 3. The bird has moved during all this chat, dammit! Re-position and try again.... 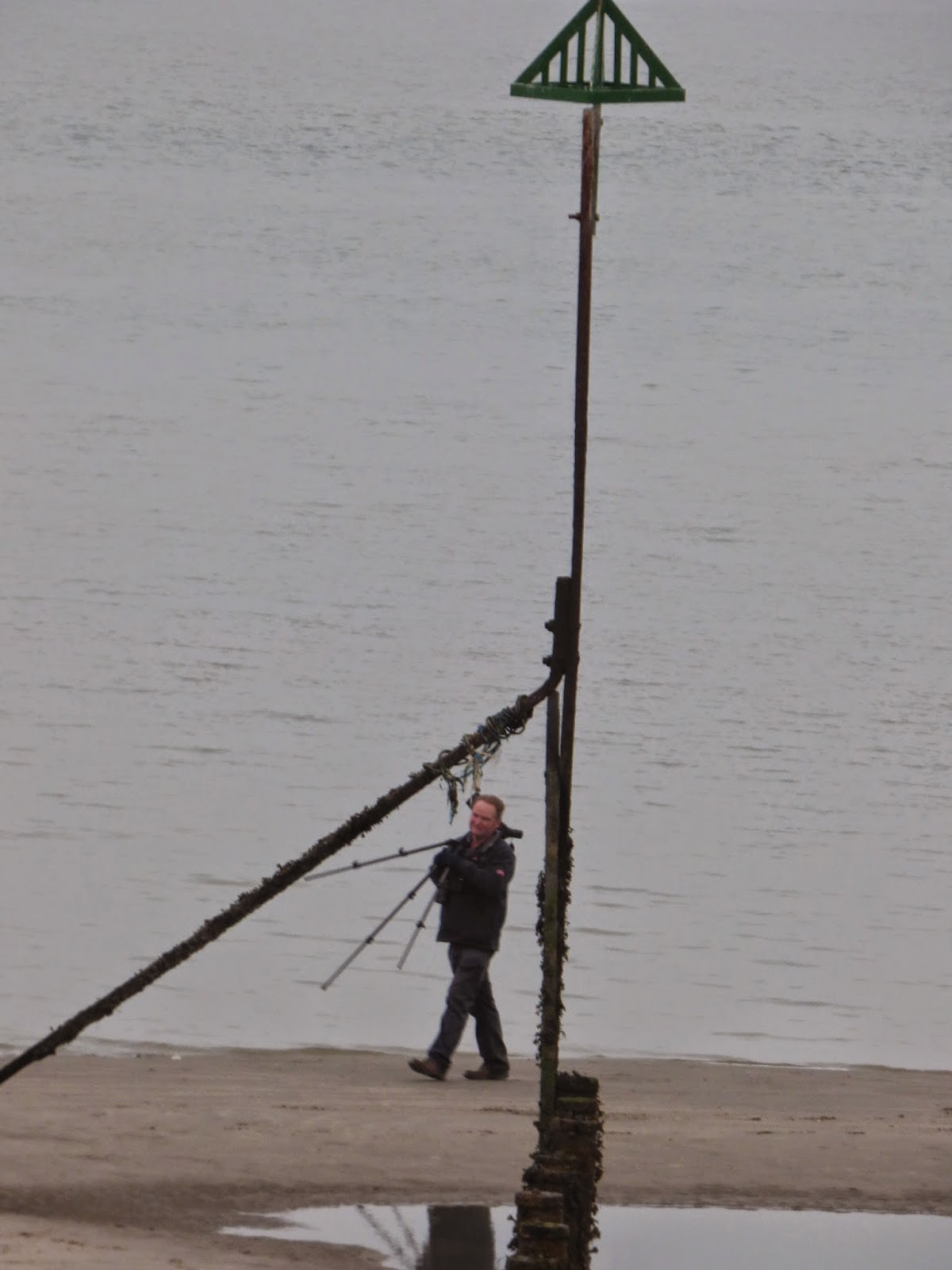 4. Success... job done and the smile of a happy man. (Note the nifty framing of the subject in this pic by yours truly!!)

Chichester GPs: A visiting Hampshire birder reported that the Tundra Bean Goose was still on the field behind East Trout Lake today with the Greylag Goose flock. (AH) Later, a further report (from LGRE) that the bird and most of the Greylags were absent until late morning when they flew over and settled out of sight.

Chichester Marina: The Black Brant was back with 1250 Brent Geese this morning in fields viewable from the hide along the right hand lane towards the harbour (i.e. the one inside the barrier)... this area is actually known as Apuldram Manor Farm marsh. There was plenty of activity there today, and also logged were 30+ Teal, 12 Gadwall, 80 Curlew, 45 Black-tailed Godwits, 9 Snipe, 2 Water Rails and 2 Cetti's Warblers. The Brent flock was feeding well but got spooked several times so I never did manage to get a photo of the Brant!  In the Chichester channel there wasn't much to report on the high tide, the most obvious birds being 25+ Little Grebes and 200+ roosting Oystercatchers. (OM) (There was also a later report from BirdGuides of a White-fronted Goose with the Brent flock; neither LGRE or I saw it and the observer is currently unknown, so cannot add any further info) (OM). 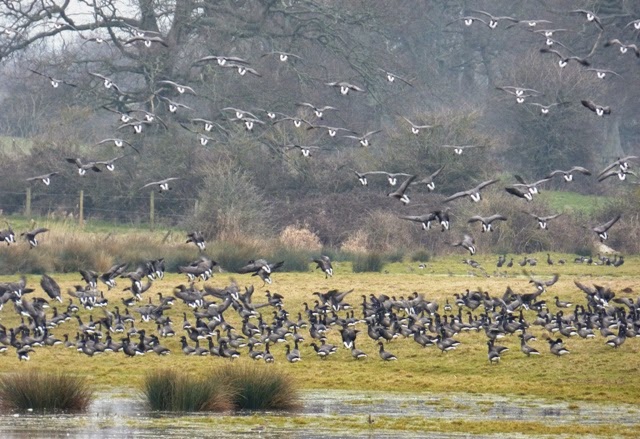 above - Dark-bellied Brent Geese on the marsh at Chi Marina; they were spooked by something several times and I never did get a pic of the Black Brant!
below - panoramic view of Chichester Marina marsh, correctly known as Apuldram Manor Farm marsh (OM)

Birdham Pool: I checked out the Pool from the roadway (as I've done a couple of times recently), logging just 9 Tufted Ducks and 30 Mallard, but then noticed the water level had dropped a fair bit and that the footpath on the NE side was no longer flooded, so decided to have a look. Looking across to the dog-leg corner of the pool on the south side, I was most surprised to see a drake Mandarin swimming discreetly close to the reeds and overhanging branches... it showed several times before melting back into the vegetation. Also present were a Snipe and a drumming Great Spotted Woodpecker. Mandarin is not an easy bird to get here, so it may be of interest to those who have this little gap on their Peninsula lists! (OM) 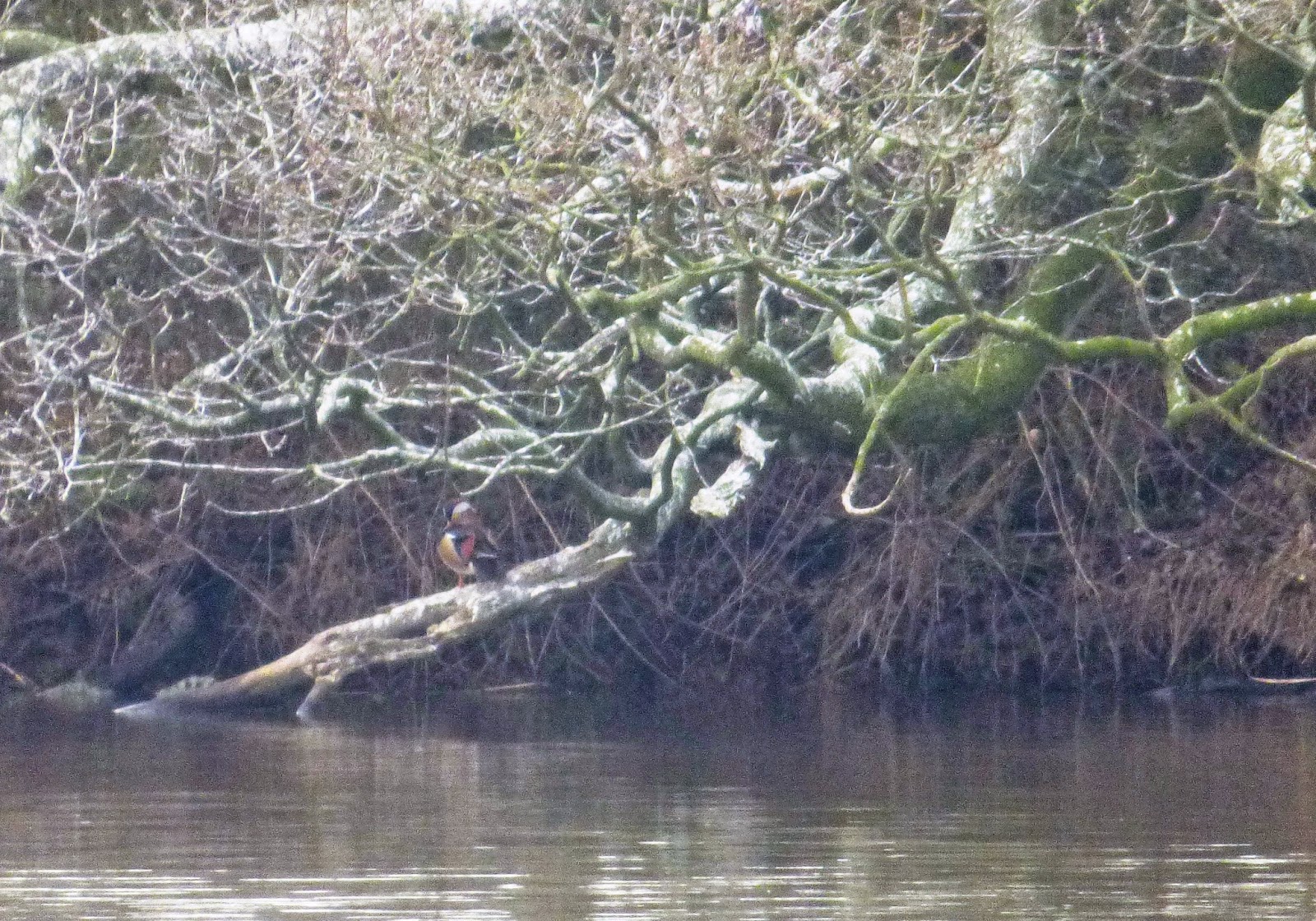 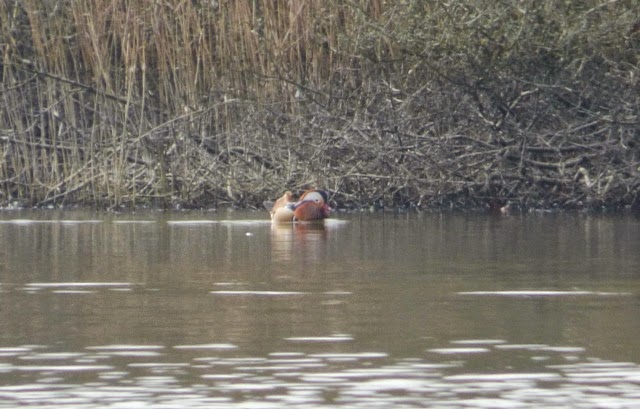 Church Norton: A Raven went west over the car-park, and the Treecreeper put in an appearance in the trees at the bottom of the path, along with two or three Goldcrests. A pair of Stonechats were on the gorse on the beach and a Cetti's Warbler and a Water Rail were calling from the second Several, but otherwise it was pretty quiet. (AH) 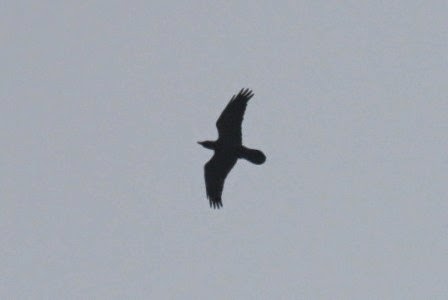 Raven (above) & Stonechat at Church Norton 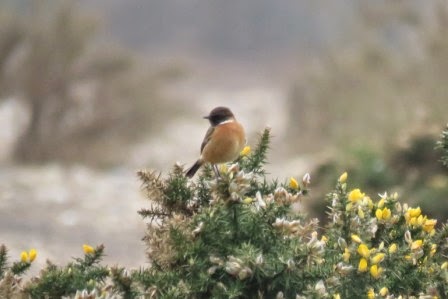 Grange Lane: I went along to Park Farm and found I could see much more by viewing one of the fields sideways on, from Grange Lane.  A flock of c.175 Brent Geese were happily feeding around he bird-scarer! Also present were the regular Green Sandpiper, a Grey Wagtail, 13 Red-legged Partridges, 12 Stock Doves, 1 Buzzard, 5 Curlew and 26 Magpies (SR).

Pagham: This morning at 10.00hrs, on a flat sea from Pagham Beach Yacht Club were 32 Slavonian Grebes including a tight-knit group of 14, while three hours later still 16 were showing, now a bit closer in on the rising tide. On Pagham Lagoon were three Goldeneyes including two head-bobbing drakes (ARK, per SOS website).

Sunday, 8th February: A bit of a brighter start and less windy, making it feel a bit less chilly, but basically still the same weather.... dry, cloudy and cool, high pressure and a northerly-based airflow....


Fishbourne Creek: There were four Spotted Redshanks and three Greenshanks again this morning, though the Whimbrel failed to show, and up to 11 Goldeneye, a pair of Red-breasted Mergansers, 10+ Pintail and 20+ Gadwall on the water.
A Jack Snipe was found near the creek, where there were also two Kingfishers and several Rock Pipits. A Spoonbill was out in the channel, but promptly disappeared, though it seems it was relocated at Pagham Harbour later on - see below. Also a Stonechat was near the reed-bed and there were about 20 Yellowhammers at the riding school. (AH & the SOS!) 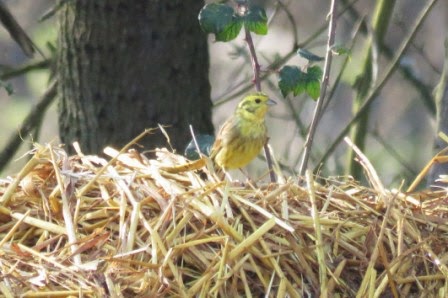 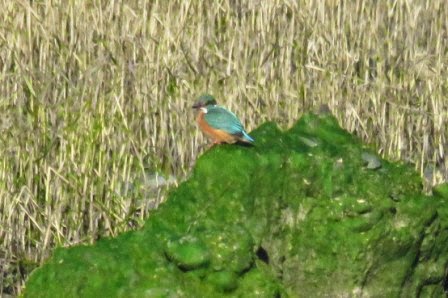 Ferry Pool/Ferry Channel: The Spoonbill re-appeared here early afternoon, but disappeared over the visitor centre into the harbour. There were at least 100 Golden Plover, 1000 Lapwing and 500 Wigeon on the fields.
Early this morning a Spotted Redshank and a Kingfisher were in Ferry Channel. (AH) 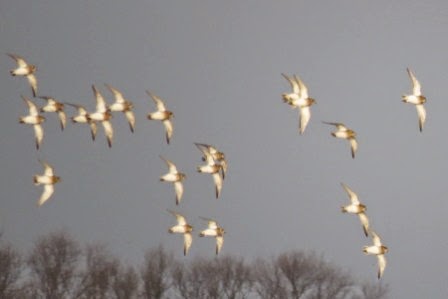 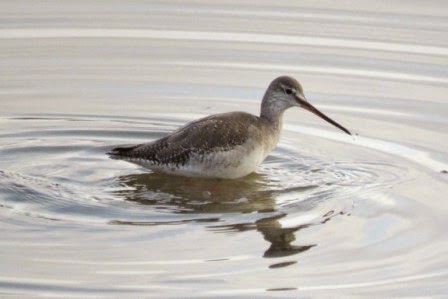 Church Norton: The Spoonbill was in the harbour, along with  21 Avocet, a Greenshank and two Goldeneye. Offshore there was a Great Northern Diver and eight Slavonian Grebes, there were a pair of Stonechats on the beach and five Buzzards over, whilst at Park Farm the Green Sandpiper was again present. (S&SaH/IP/PC/IL) 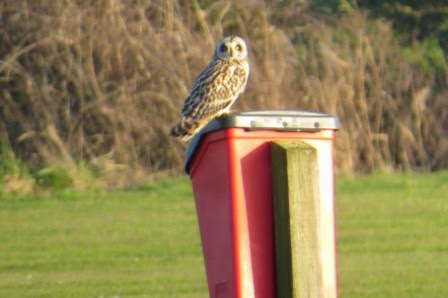 Short-eared Owl at Chainbridge Field - on what is now the famous dog-poo bin! (BI)

Pagham Visitor Centre to Ham - At Porthole Farm there were up to four Chiffchaffs, a Stonechat, a couple of Yellowhammers and up to fifty Skylarks on a stubble field, plus a couple of hundred Pied Wagtails on the sewage farm and three Buzzards over.


Two, and possibly three, Short-eared Owls were seen hunting over the Medmerry reserve, and two Spoonbills were briefly seen out in the middle. About 500 Brent Geese were near the farm, and along the bank/hedges up to 20 Reed Buntings, more Skylarks and one or two Meadow Pipits, plus a flock of c50 Stock Doves. Also the Southern Pochard was still in its regular spot. (AH & the SOS/BI) 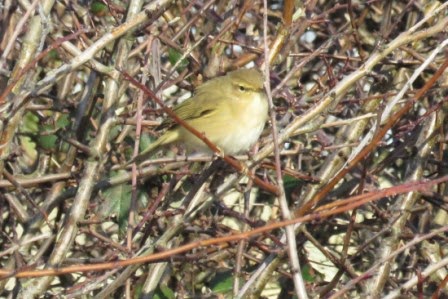 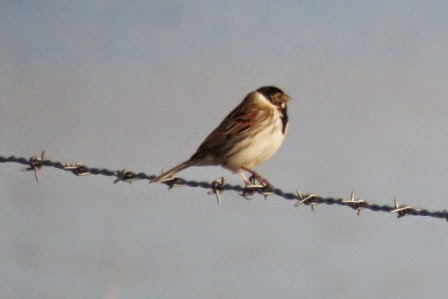 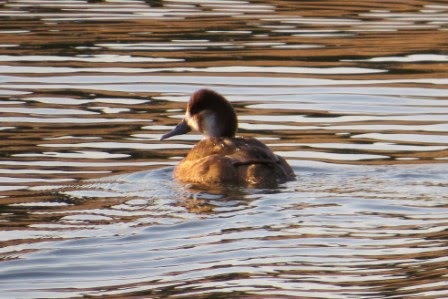 Easton Lane west - The two Spoonbills were on the 'Stilt' pool until 1.30 when they flew into the reserve. Also a Sanderling on the mud by the breach, with 30 Ringed Plover, 20 Grey Plover and 20 Dunlin, whilst there were 12 Common Scoter offshore. (PH)


Later on a Raven went over, and there were four Stonechats about, half a dozen each of Yellowhammer and Reed Bunting present and 50+ Skylarks, including at least 40 in one flock on a stubble field. Also 20 Golden Plover and 500 Lapwing were seen. (S&SaH)

Saturday, 7th February: The weather seems to have got stuck in a rut, with high pressure set in place and a cold easterly airflow predominating, though the birds are largely unmoved by it! Then just to contradict the editors' views, there was a good deal more interest at the Bill this morning!...
Selsey Bill: (0715-1000hrs)  (SH/JA/PB/AGB/SR) 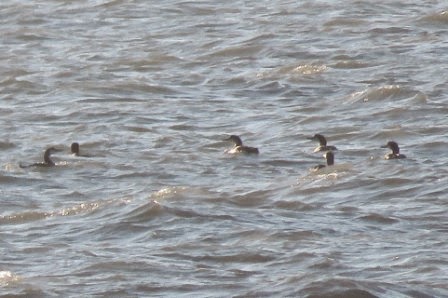 Park Farm, Selsey: The Green Sandpiper was showing well this morning, and a Grey Wagtail and a Chiffchaff were also about. (SH) 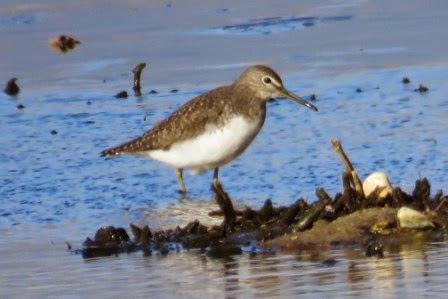 Ferry Pool/Long Pool: There were two Great Black-backed Gulls on the pool early this morning and c60 Golden Plover in with c1000 Lapwing, and there were at least 500 Wigeon on the fields.
Not much along the Long Pool, though a Spotted Redshank flew up calling from the channel and dropped back in. (AH) 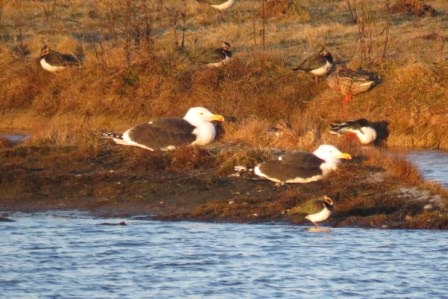 
Fishbourne Creek: All the regular birds showed on a good morning to be out, including the regular Whimbrel, probably four Spotted Redshank and three Greenshank, at least 100 Black-tailed Godwits and plenty of common waders. There were three Goldeneye and 22 Gadwall amongst the duck, plus at least eight Little Grebes and four Great Crested Grebes.


A Kingfisher whizzed by, a Stonechat was by the reeds and there were several Rock Pipits along the edge, but best of all, there were at least 30 Yellowhammers in the big cereal field by the riding school. (AH) 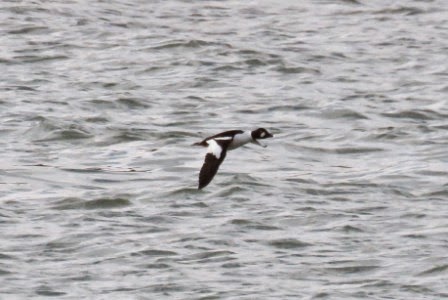 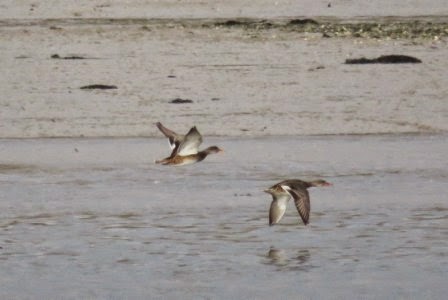 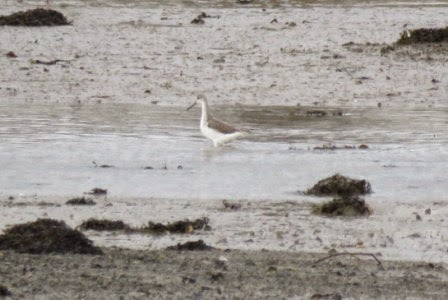 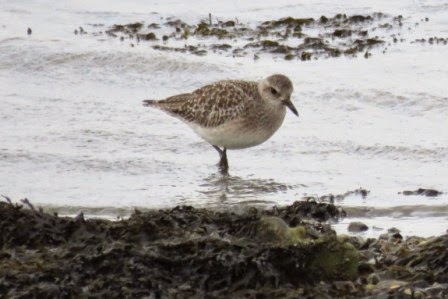 Medmerry: Chainbridge Field to Ham - There were three Short-eared Owls on show on and off this evening around the field, though no sign of the Barn Owl. There was also a Sparrowhawk in the caravan park, a Buzzard sat on the pipe across the rife and the regular pair of Stonechats were still in residence.
Towards Ham there was a Redwing in the hedge, and a big mixed flock, including two Corn Buntings and about 20 each of Reed Bunting and Yellowhammer, and there were four or five Skylarks about, too.
One Spoonbill was visible out on the reserve, and there were a couple of hundred Lapwings on the uncropped fields and a big flock of Brent Geese (c300) dropped in. (SH/SR/AH) 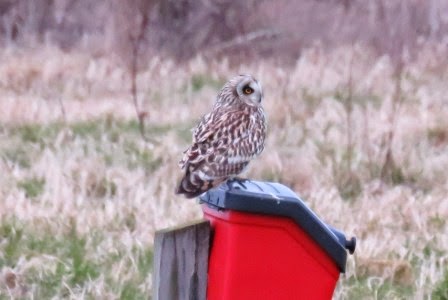 Chichester GPs: The Tundra Bean Goose was still on East Trout Lake today with the Greylag Goose flock. (Paul James per SOS)
Posted by Birderowen at 14:45