Friday, 22nd January: A return to milder but wetter weather.... a miserable grey and cloudy morning with rain and a fresh to strong S/SSW wind...becoming drier by early afternoon.

West Wittering: There have been a pair of Nuthatches, a Treecreeper and a Coal Tit in my garden (on the northern edge of the village) in recent days. (GM) (All three species scarce indeed on the Peninsula - Eds). 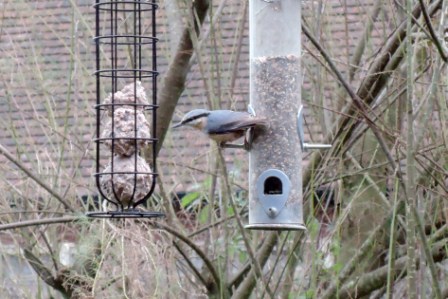 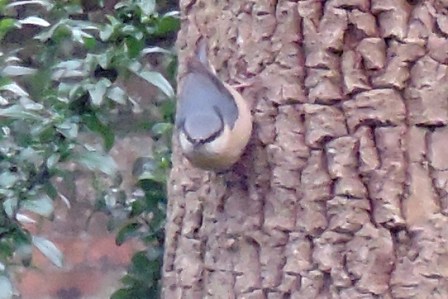 Nuthatch (above) & Treecreeper in a West Wittering garden (GM) 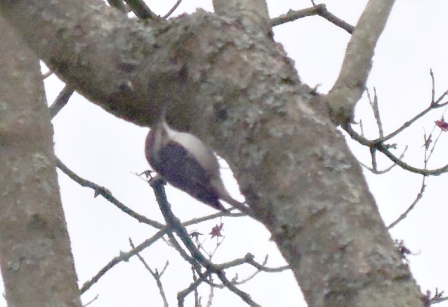 Half an hour at the Bill between 11:30 and noon produced only six Gannets feeding fairly close in, but nothing else. (BI)

Church Norton: There were four Red-breasted Mergansers, two Little Grebes and about 500 Brent Geese in the harbour, plus plenty of roosting Dunlin, Curlew, Redshank and Grey Plover on the high tide. (AH) 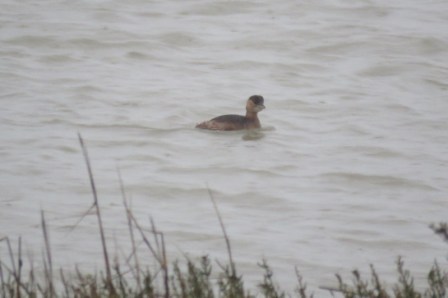 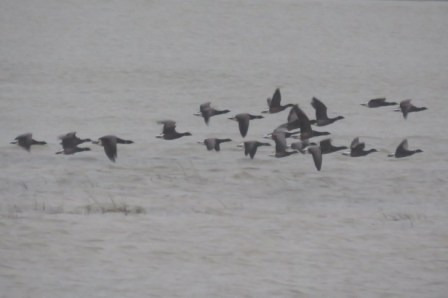 North Wall area: The Brent Geese flock were still off the track to the west of Pagham village but flew towards the fields at the end of Summer Lane before I could go through them for the Black Brant. (BI) 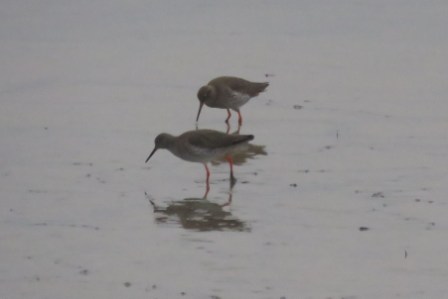 Redshank on the Ferry (AH)

Thursday, 21st January: Cold, cloudy and  fairly grey, with a chilly but light SSE wind and the possibility of some rain by evening.....

From the Archives... I was searching through some old photo's, looking for material for a future presentation, when I came across this advert for Bill House, which dates from 1990/91, some 25 years ago now (note my small witticism of the time!) We used to be allowed by the owners at this time to carry out observations from inside the tower - not always easy if there were several observers, due to the window arrangements, but very cosy on a cold day!
This landmark is of course still going strong, though it has since changed owners more than once and it is currently used as a residential home for dementia patients. Although we can't use the lookout tower any more (it was originally a Coastguard lookout), on the plus side the garden has probably never been better for birds with a thick tamarisk hedge and garden vegetation proving attractive to migrants (OM). 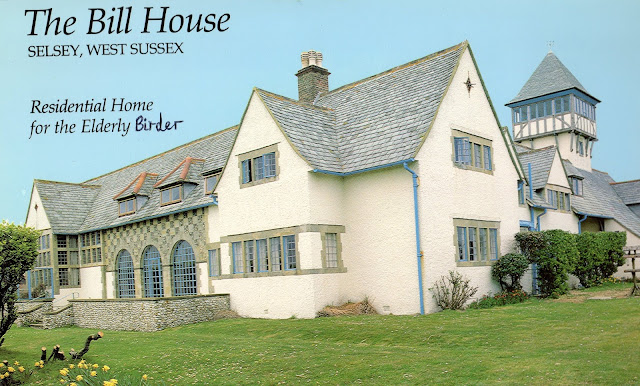 Selsey (West): Warners Lane/Crablands: Not much to report other than 19 Snipe on the flooded fields (OM).

Fishbourne Creek: Quite a good selection of birds this morning, though the numbers of wildfowl in the harbour has dropped significantly. Off the Sailing Club quay there were four Goldeneye (an immature drake and three redheads) with another pair further up, plus a dozen Little Grebes, but surprisingly no Red-breasted Mergansers.


At least three Greenshank and probably two Spotted Redshank were roosting on the opposite bank and the Whimbrel was again along the east side. A single Jack Snipe and Common Snipe were also along the side, as were 40 Turnstone and plenty of Redshank, and several hundred Dunlin and 50+ Grey Plovers were roosting at the northern end.
At least 300 Black-tailed Godwits, 50 Curlew and 100+ Wigeon and Teal were in the flooded field by the reed-bed, and along the path at least a dozen Rock Pipits, half a dozen Meadow Pipits and Reed Buntings, plus a pair of Stonechats and a few Goldcrests were present. Also a Kingfisher was around the outflow/reed-bed area, whilst at least 20 Yellowhammers were around the riding school. (AH) 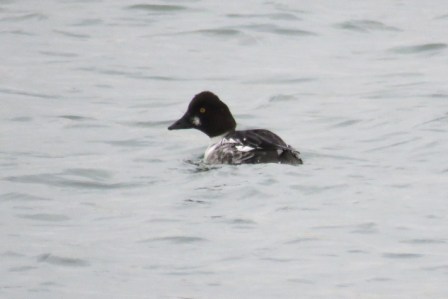 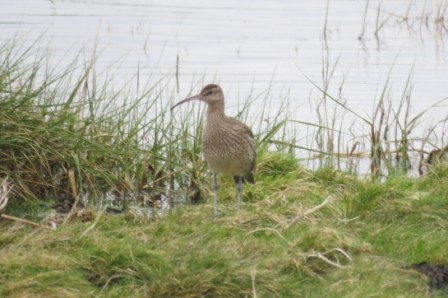 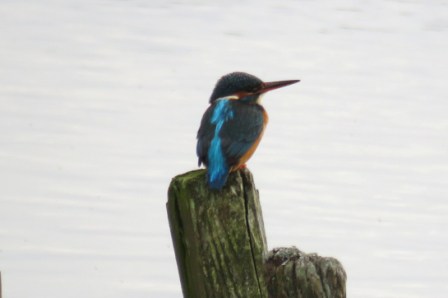 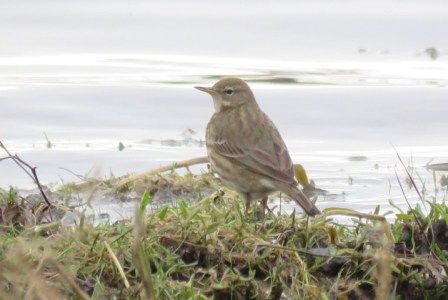 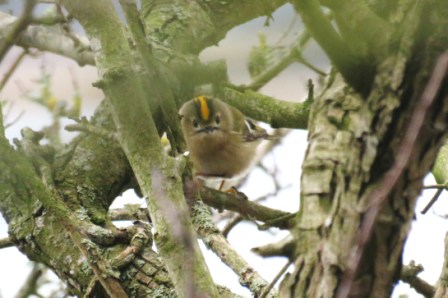 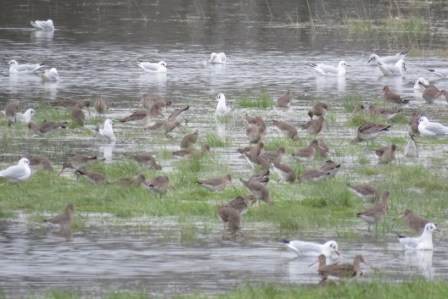 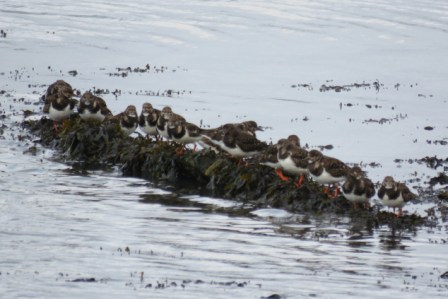 Chichester GP's: Drayton Pits -  With over half of the main lakes frozen over, wildfowl were concentrated on the remaining open water, and numbers had obviously increased recently following the cold weather. Even so, there was nothing out of the ordinary, except perhaps for a count of 120+ Gadwall, with 45 Shoveler and 50 Teal being fairly average for the time of year. A large gathering of gulls on the ice proved mainly to be Black-headed, with just a few Herring and Common Gulls thrown in and nothing unusual, whilst just one Snipe and a Cetti's Warbler were a poor reward for my efforts. (OM) 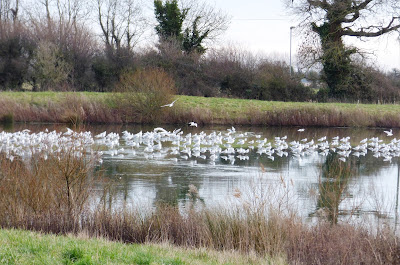 
As promised, an update editorial this morning, concerning the editors' review of the blog and any proposed changes.....
With the blog approaching its third birthday in early March and a page-hit score now of well over one-third of a million, we felt the time was right for such a review, to see if any adjustments could improve things, and to prevent stagnation. We also took on board the comments made by those of you that responded, for which we are grateful.
In coming to our conclusions, we felt that basically we had a winning formula that needed only minor adjustments, given our available time and level of expertise (ha!) and of course the somewhat temperamental Blogger system we use. Somehow we have managed to put out a report every day since we started - doubtless we'll miss a few in the future - but the demands of domestic life, holidays and commitments don't always make for an easy time, so we plan to keep things simple and not get over-ambitious. That way we feel the status quo will continue....and judging by the favourable comments we receive from observers in the field and elsewhere, that's the way you want it to continue too! So without going into detail, please note:
1. Colour scheme: We use a scheme which colour-codes areas of the peninsula, e.g. green for Pagham harbour, blue for Selsey, red for Medmerry and so on, against a dark background. After various trials this will continue - although the colours themselves will be toned down to become less garish (there may be a bit of tinkering yet before the final choice).
2. Daily blogs: You may have noticed we use three days to each individual blog (so ten blogs to the month). This will continue for administrative reasons and ease of research.
3. Photos: We always try to add photos to the reports each day... whatever the weather and prevailing light conditions. Whilst we always want the best possible photos, the reality is that many of the pics are just record shots - or sometimes worse! Even so, they have value as the blog is effectively a daily record of events, and a photo helps provide the reality of the situation. Some sites pride themselves on only using best quality photos - fine until the conditions don't allow such a luxury - but we will continue to do our best in all conditions (thanks here to AH!). Please note we are always pleased to receive photos, but bear in mind our need for them promptly to meet our daily deadlines.
4. Adverts: We have considered this, and also the possibility of sponsorship, but at present we won't be taking this route.
Finally, thanks as ever to all of you for your support, which makes all the effort worthwhile (OM/AH)

North Wall: A crisp, bright morning along the Wall but not many birds around; lots of ice and frost around first thing. Two Spotted Redshanks on White's Creek and another at Owl Water and 30 Lapwing in the field behind the Breech Pool. The Pool was frozen over and there were just 20 Mallard, 4 Teal and 4 Canada Geese sitting on the banks. Nearby 40 Curlew in Honer 3 field and 300+  Wigeon in the field due east of Owl Copse. The main Brent Goose flock was again behind the Village Hall in Pagham Road. (JDW)
To add to the above, there were 25 Mallard around the Breech Pool, c200 Lapwing and 100 Curlew in the North Wall area, two Cettis Warblers heard, three Buzzards seen and 84 Shelduck in the harbour (CRJ) 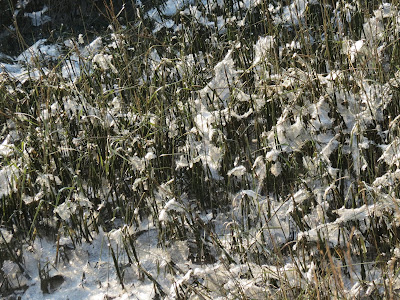 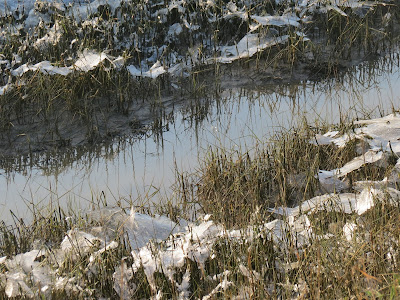 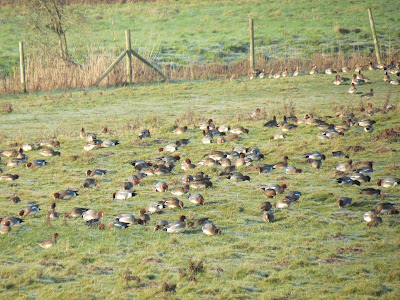 Pagham village: In my garden Great Tits are nest prospecting and Blue Tits are already nest  building. (JDW)
In the fields between the village and the North Wall there were 2500 Brent Geese in the fields next to the road. (CRJ)
A Black Brant was later found among this big flock. (ARK per SOS) 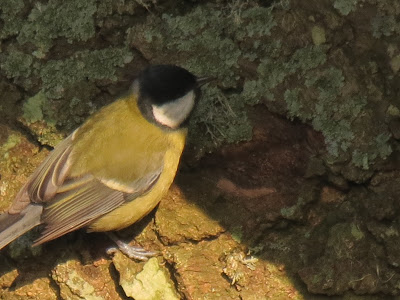 Ferry Pool: There were just two hundred Lapwings and not much else this morning. (AH) 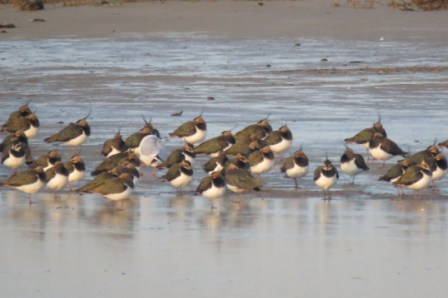 Lapwing on the Ferry (AH)


Long Pool: Around ten Snipe were flying about on the big tide and similar of Avocet were at the end of the channel, with large numbers of the commoner waders and wildfowl, all disturbed by firstly the two Peregrines and then a Sparrowhawk. There were about a dozen Reed Buntings along the hedges, but not many other small birds were about, though a Cetti's Warbler and two Water Rails called from the reeds. (AH) 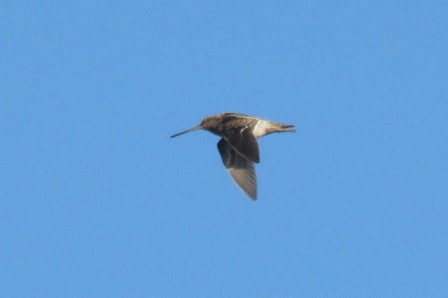 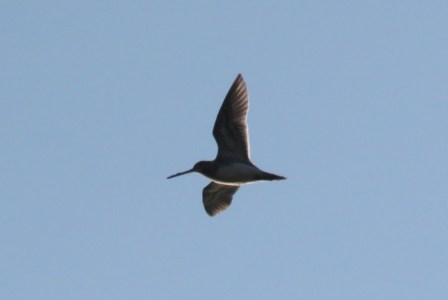 Snipe (above), Sparrowhawk, Reed Bunting and Wigeon from the Long Pool (AH) 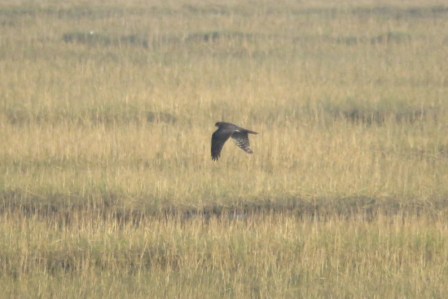 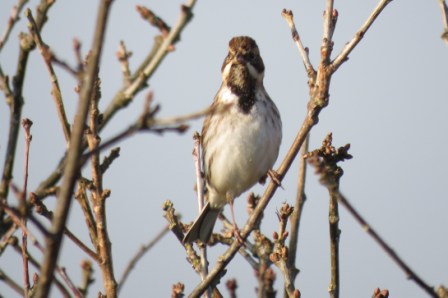 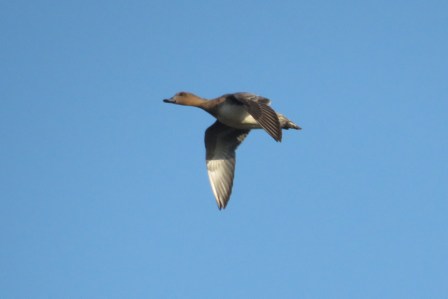 Church Norton: There were two Spoonbills roosting in the harbour at high tide, plus four Red-breasted Mergansers on the water. Offshore the 'Selsey' Eider dropped in from the west, as did two Red-throated Divers, and there were two Great Crested Grebes, six Red-breasted Mergansers and 15 Mediterranean Gulls on the sea, and a Great Northern Diver flew over the Severals heading west. (AH) 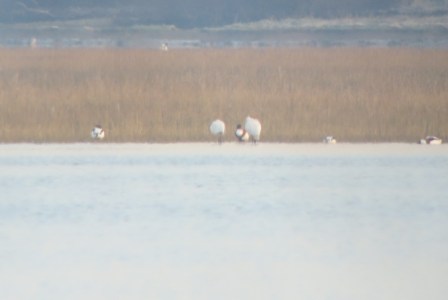 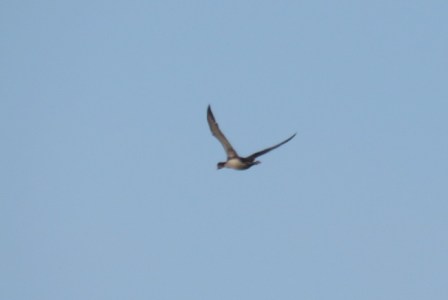 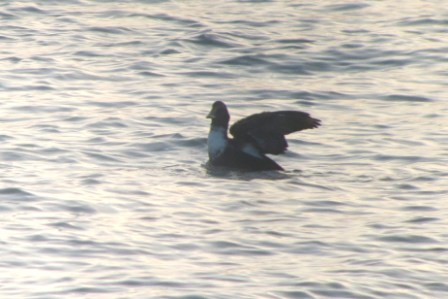 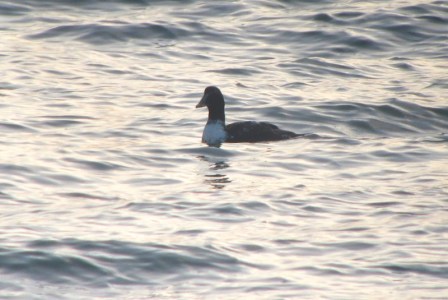 Medmerry: Easton Lane to the Stilt Pool - A visit to the western side gave us all the expected birds with good numbers of Skylarks, Meadow Pipits and Yellowhammers. The highlights of the day were 2 Spoonbills near the breach, a Common Sandpiper on the "Stilt" pool, a Black Redstart on the buildings due north of the pool along with a stunning male Sparrowhawk and a single Snipe in one of ditches. We also had good views of a Peregrine at different locations so there could have been two. (D&J Killick per SOS)