Sunday, 31st January: Another grey, damp and dreary day with heavy cloud, drizzly rain, fairly mild temperatures and a strong SW wind..... and so the month goes out in much the same way as it started!

Church Norton: The Whimbrel was in its usual area near the bench and one of the Peregrines was in the harbour, but there was not much else to report - the big Lapwing flock going up a couple of times on the far side of the harbour, a few Wigeon, Shelduck and the usual waders about and a few Greenfinches and Goldfinches along the path to the harbour, with more of the former along the beach, was about it. (AH/IP/S&SaH) 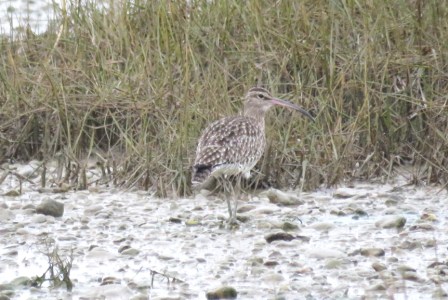 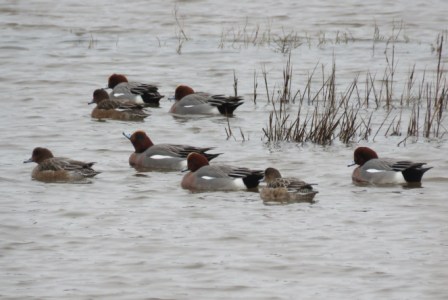 Ferry Pool: No waders at all mid-morning - just two Shoveler and 40 Teal on the pool and c100 Wigeon on the field. (AH)
This afternoon - on the high tide - there were 31 Avocets on the pool. (IL)

Medmerry: Breach Viewpoint - A Black Redstart was on the rocks just inside the reserve close to the shore and a female Eider was at the Breach, whilst on the pools 5 female Red-breasted Mergansers were having a feeding frenzy.  There were also c200 Lapwing, 7 Curlew, 2 Great Crested Grebes, 35 Brent Geese, 4 Shelduck and a hunting Kestrel.  On the rough ground there were 2 Stonechats at Toe End. (SR)

Ham Farm to Chainbridge - A late afternoon look failed to produce any owls - or a lot else! - though 25 Golden Plover flew onto the reserve and there were a dozen Shelduck and Brent Geese on the tidal area, similar of Tufted Duck on the Ham pools, plus a calling Cetti's Warbler, and at least five Little Egrets on the cropped fields. (AH)

Somerley (Between Earnley and Birdham): Although not recorded on the Winter Distribution map in 'The Birds of Sussex' for 'my' tetrad, a Coal Tit has been a very regular visitor to the feeders in my garden in Somerley from October 2015 to the present. (M Karn per SOS)
(It seems we may have under-estimated the regularity of Coal Tits along the western edge of the peninsula! Eds)

Saturday, 30th January: Wild and windy overnight with gales and storm-force gusts. The wind had subsided considerably by morning, though still remaining a strong  westerly 5-6, with grey skies and heavy rain gradually easing. It is of little compensation that temperatures remain mild, though a bit of brightness would help....

As promised earlier, I thought it would be interesting to show an occasional image from days gone by, to replace the previous 'From the Archives' feature. The Archives albums covered the years from Sept 1981 - May 2008, before digital pictures really took over, so herewith my first offerings.....more in the future. (OM) 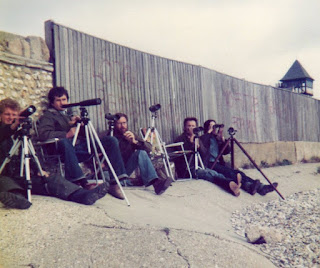 The very first photo in Album 1....from left to right: Eric Lloyd, Mervyn Jones, Tony Marr, Mick Hay and Keith Maycock, all gathered behind the Bill House garden fence to shelter from the wind in Sept 1981. Note the optics of the day and the old oak fence (long since replaced). (OM) 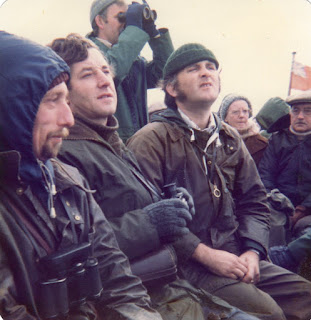 Selsey goes to the Scillies, Oct 1981. A team of Selsey regulars always made the pilgrimage west each October, and here we see three regulars - Chris Janman, Eric Soden and Mick Hay - all tensed up on an inter-island boat, (waiting to twitch a Pallas's Warbler!) (OM)

Medmerry: Easton Lane to the Stilt Pool - Among the usual suspects this morning was a Spotted Redshank in the creek opposite the Stilt Pools, plus a Peregrine passing through. No sign of the Dartford Warbler, but the Green Sandpiper was on the two pools behind the Ruth's Marsh Lookout, plus a Merlin was by the Poplars. (PLS)

Church Norton: A Short-eared Owl that was around the harbour before settling on Tern Island was the highlight of a quiet morning. There were a few Red-breasted Mergansers and the regular waders, but not much else of note, though five Pintail went over.. (IP/AB/PB)

Pagham Lagoon/Spit: There were four Goldeneye and three Red-breasted Mergansers in the channel to the harbour mouth, and a couple of pairs of Ringed Plovers were displaying along the spit, and there were a few Common and Mediterranean Gulls about. Nothing much to report from the Lagoon, bar 20 or so Tufted Ducks, Little Grebes and Coots, though a Stonechat was by the caravans and the two Peregrines were chasing each other about and even passed some food at high speed. (AH) 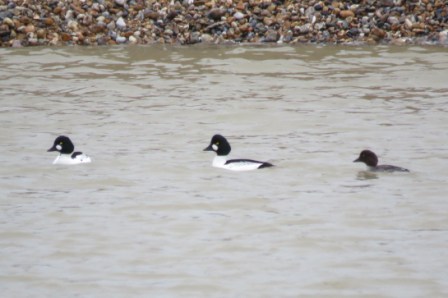 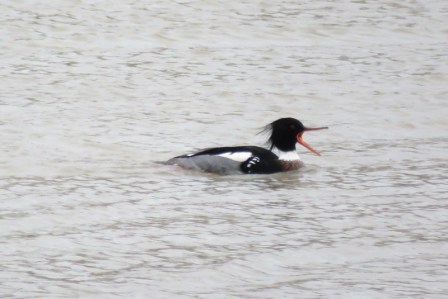 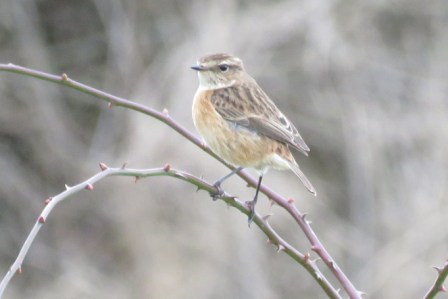 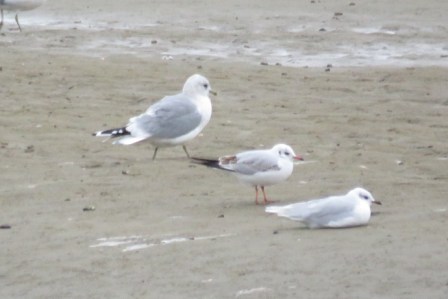 North Wall: The odd 'Tufted' Duck was on the Breech Pool - see below for more comment - but there was not much else of note, though at least eight Grey Heron's were toing and froing from Owl Copse, and there were 60 Curlew and 400 Brent Geese in the fields.
A Spotted Redshank and several hundred Wigeon were in White's Creek and there were 1000+ Lapwing constantly taking flight, with up to 150 Golden Plover joining them.
There were still good numbers of finches and buntings in the Slipe Field, with very approximate counts thus - Yellowhammer - 30. Reed Bunting - 120, Linnet - 400, Goldfinch - 80, Chaffinch - 40, Greenfinch  - 100, plus a flock of a dozen Long-tailed Tits. (AH) 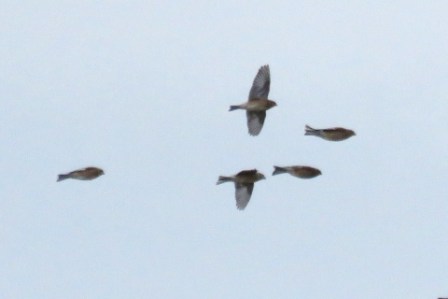 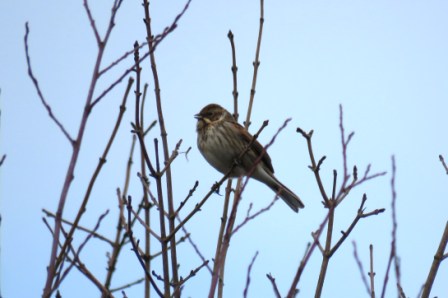 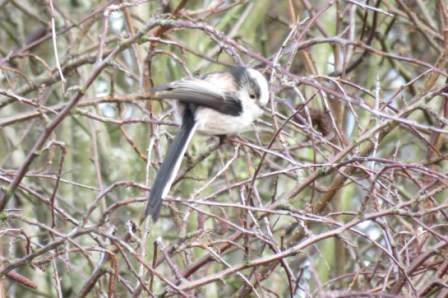 The contentious female-type Scaup/Tufted/hybrid was again on the Breech Pool this morning (AH) and at risk of boring everyone to death, some final comments.......


I think it is a likely hybrid or possible Tufted, whilst AH considers this bird to be a Tufted. However, it is AH's view this is a different bird than the one seen on New Lake, Chi GPs a short while ago - and he still feels that bird is a likely genuine Scaup. There is a further complication concerning one (or the same?) seen on New Lake a few days after by ARK - who thought it to be a Tufted. And of course there is the original bird found by BI on Pagham Lagoon, which some may consider different? So we may have the two, three or even four bird theory!
The editors propose to draw a line under this one now and observers can make up their own minds - see pics below...so no further comments unless there is some future definitive information... ! 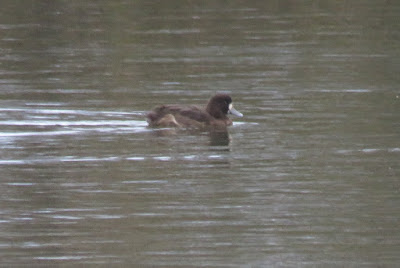 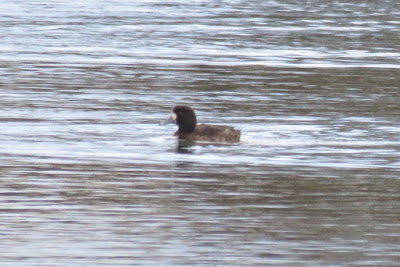 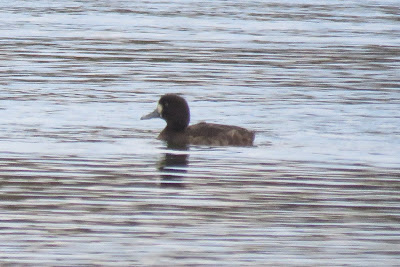 Compare these to the photos below of the bird on the Breech Pool.....what do you think? 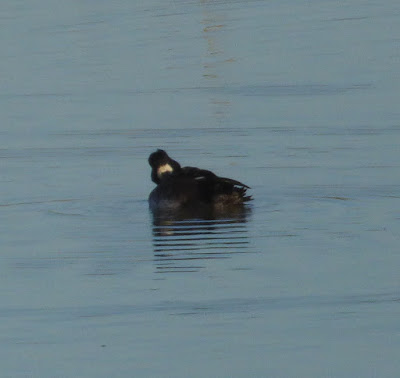 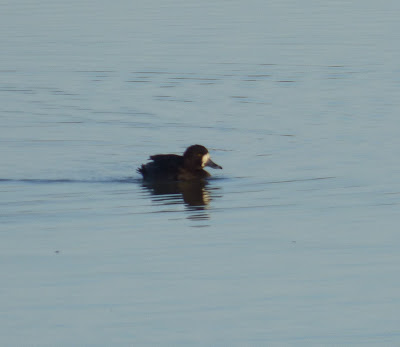 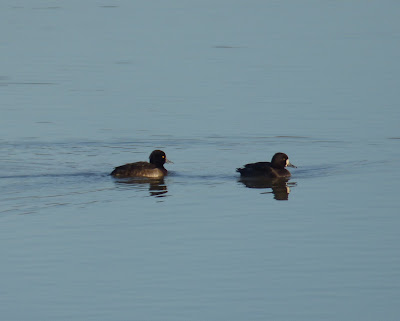 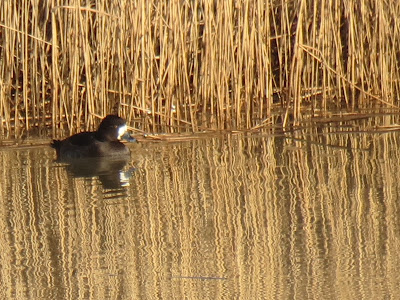 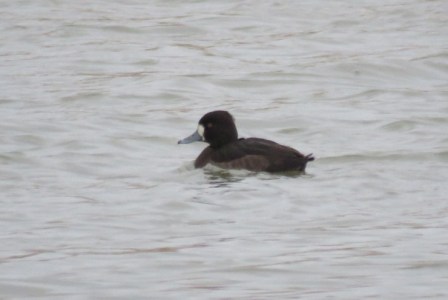 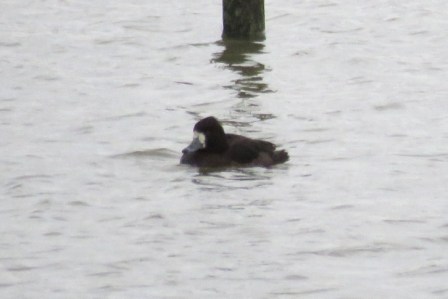 Friday, 29th January: A return to grey skies, strong winds and comparatively mild temperatures; overcast and mainly dry but with the chance of rain at either end of the day and a strong to gale force WSW wind....

Church Norton: A very surprising sighting this morning of a Long-eared Owl that flew up from the spit and dropped into the harbour. Our immediate thought was Short-eared, but it was clearly dark and very rufous/orange above and the wings appeared somewhat shorter and rounder. The very poor record shots below just about confirm the id!
A Firecrest was at the bottom of the path to the harbour, but otherwise it was pretty quiet, with plenty of Dunlin and Grey Plover in the harbour and on the beach with 50 or more Turnstones, but not much else. (AH/BI) 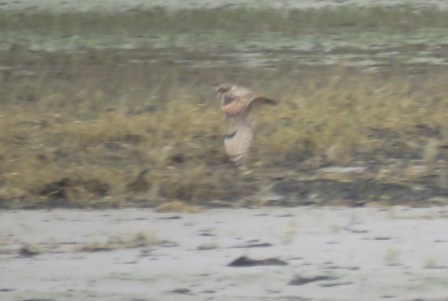 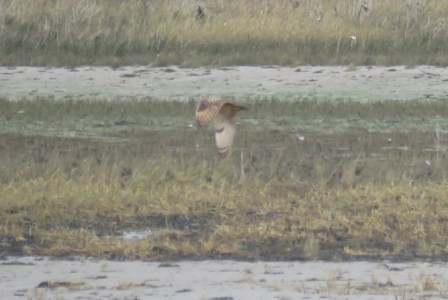 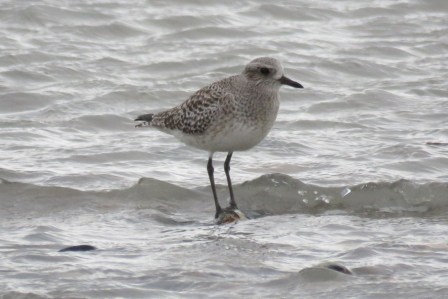 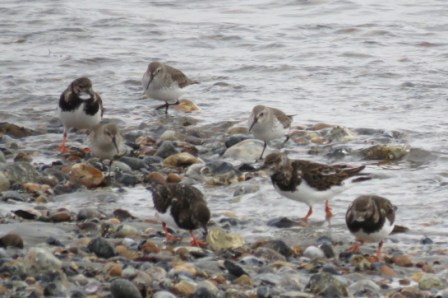 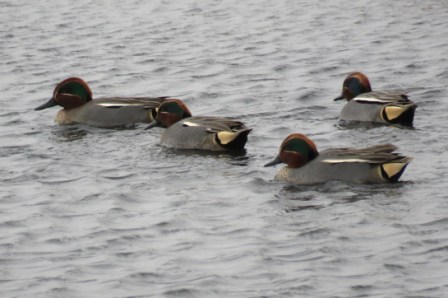 Teal (above) & Brent Geese at the Ferry (AH) 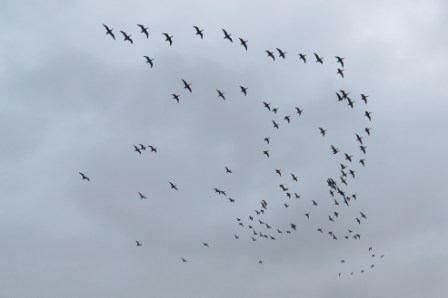