Easter Monday, 28th March: Storm Katie battered the South Coast overnight with damaging gusts reaching force 11/12 at their peak.... probably the worst storm to hit us for a considerable time. The aftermath this morning unfortunately failed to produce much at sea bird-wise, whilst the gales and rain gradually subsided to leave a changeable day with sunshine and cloud and a brisk WSW breeze....

Meanwhile, not quite normal service on the blog today with ongoing power cuts in the Selsey area and elsewhere and other unexpected commitments due to damage..... will catch up as soon as possible. (OM). 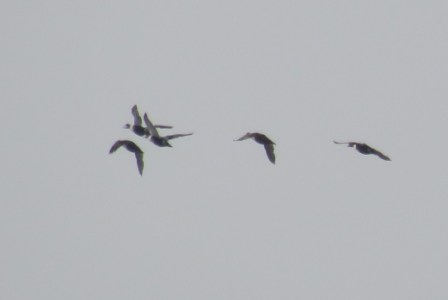 Eiders (above) & Red-breasted Mergansers off the Bill (AH) 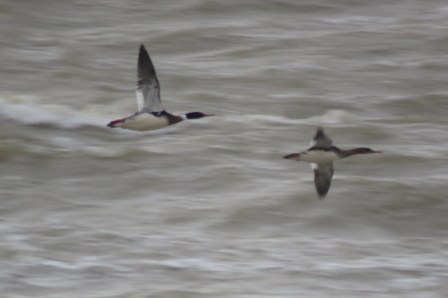 Selsey: Two Blackcaps were in the observer's garden in the north of the town. Nearby in the Park Farm area were a Firecrest, a Black Redstart, 8 Chiffchaffs and a Reed Bunting. (SH) 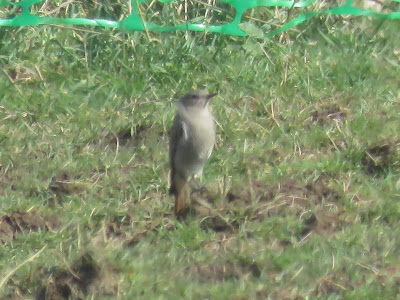 Church Norton: There were 2 Gadwall on the second Severals, a Raven and 4 Chiffchaffs. (S&SaH) 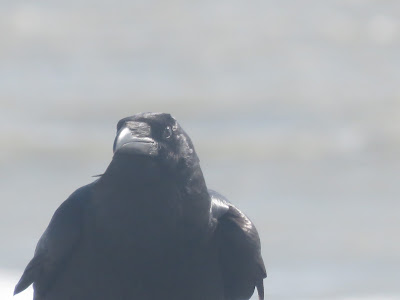 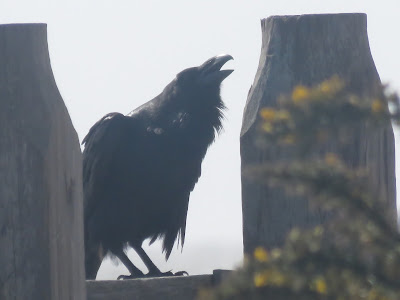 Another Raven was seen along the west side, tussling with the local Carrion Crows, and there was also a Reed Bunting, a Goldcrest and a couple of Chiffchaffs along the hedges and up to 50 Black-tailed Godwits in the harbour. (AH/IP/CN) 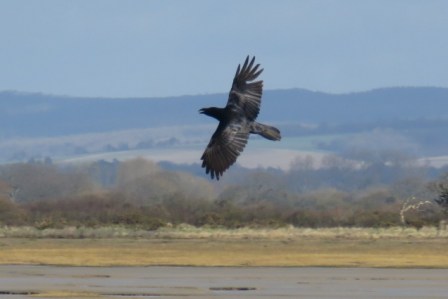 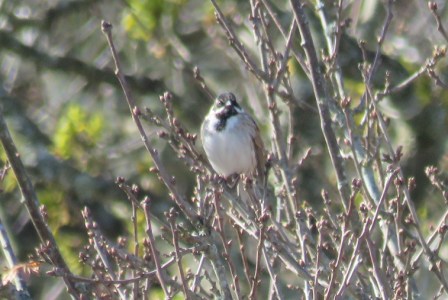 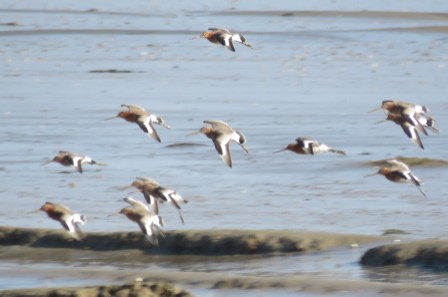 Ferry Pool: Just two Avocets and eight Teal on the pool and a pair of Gadwall in the rife this morning. (AH) 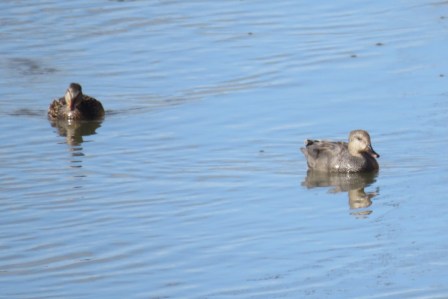 Gadwall at the Ferry (AH)


Ivy Lake: Up to ten Sand Martins were over the lake late this morning. (AH/IP)

Sunday, 27th March: Cloudy and blustery with a strong SW wind gusting to gale force. Mainly dry for a couple of hours or so early on, then heavy and sometimes prolonged showers of rain and hail, with some brighter interludes later... 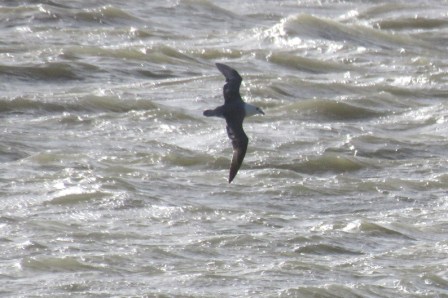 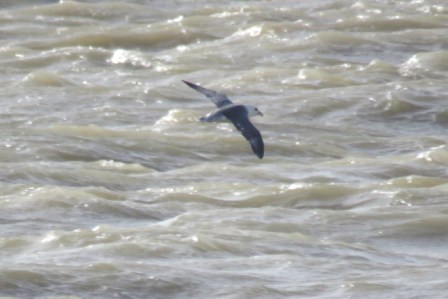 Fulmar (above) & Brent Geese at the Bill (AH) 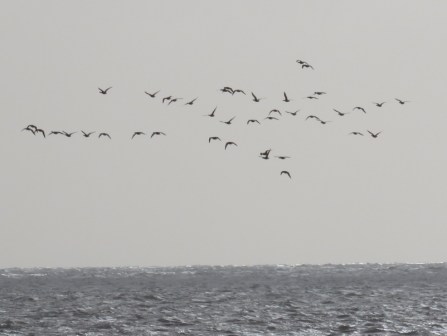 Park Farm, Selsey: There was a male Wheatear this morning on fields east of the buildings, and a Sparrowhawk briefly nearby. (IP)

Chichester GPs: There was a single Sand Martin on Drayton Pit from the railway side this morning. (BI)
Late this afternoon on Ivy Lake there were at least 50 Sand Martins and just a single Swallow. (IP) 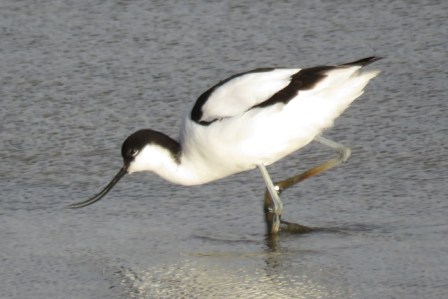 Avocet (above), Black-tailed Godwit & Teal on the Ferry (AH) 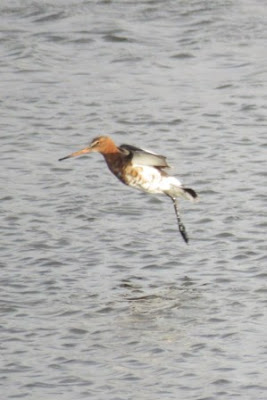 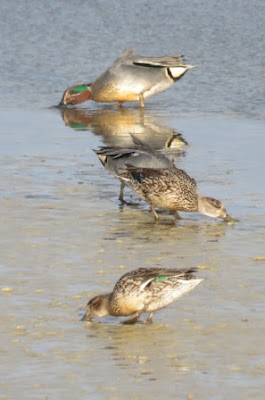 Church Norton: A male Wheatear was on the concrete slabs this morning, found just before a very heavy hailstorm set in. Other birds seen included 200+ Meadow Pipits and a few Linnets on the beach, seemingly grounded by the weather, a few Skylarks along the spit, a Sandwich Tern and four Red-breasted Mergansers offshore, plus four Gannets going east, and 50+ Shelduck and Black-tailed Godwit in the harbour. (AH/IP) 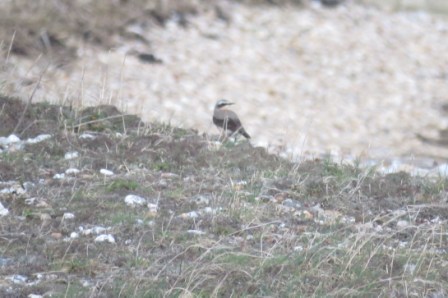 Wheatear (above) & proof that we suffer for our cause - IP starting the long trudge back to Selsey in a hailstorm at Church Norton! (AH) 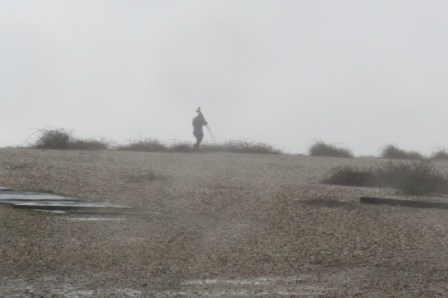 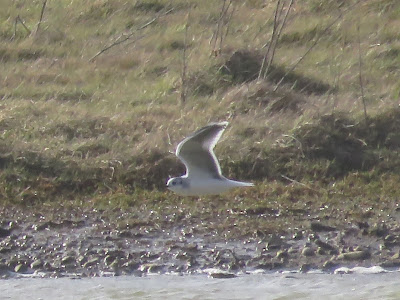 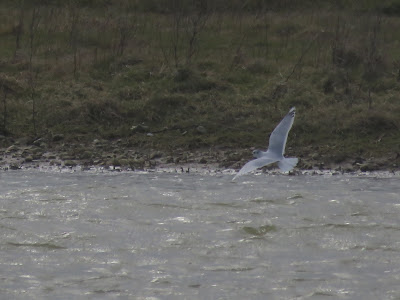 Saturday, 26th March: A cloudy but dry morning with a strong southerly wind....the forecast having changed considerably at fairly short notice....with heavy rain now not due until late afternoon.

So where is the heavy band of driving rain moving through all morning on that strong southerly that the Met office was warning me of up until very recently? Such iffy forecasts influence birding decisions... it just goes to show there's no substitute for putting in the hours whatever the weatherman says! (OM)


Selsey Bill: And if proof was needed - two Ravens - only the second-ever record here - were present early on, even settling on the Oval Field, before drifting off west and then returning again, heading east. There was quite a bit of other movement, including the first Arctic Skua of the spring, three Black-throated Divers and a very odd-looking 'leucistic' Brent Goose.
Later on there was another Arctic Skua and the first Common Tern. Full log below...
(The leucistic Brent Goose was reported passing Dungeness at 11.30 this morning (per BI), an impressive two and a half hours, and quicker than by car!) 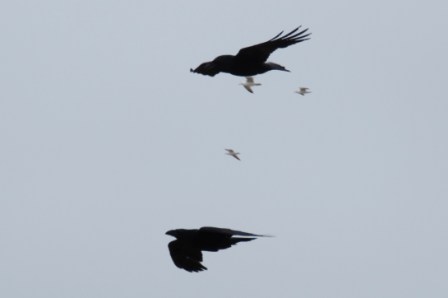 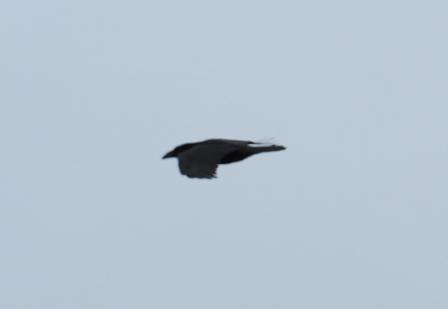 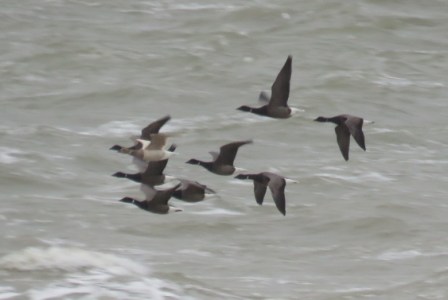 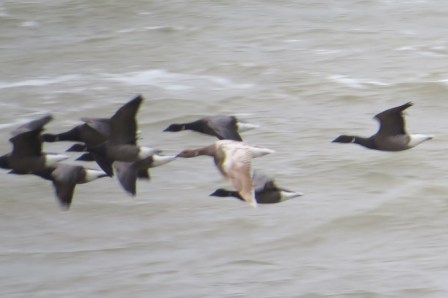 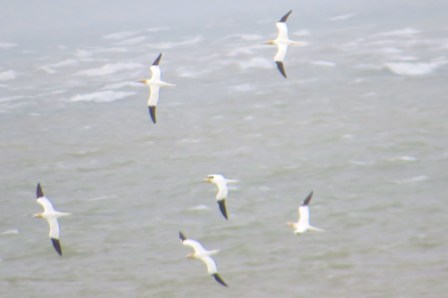 Selsey area: A Blackcap singing in a garden to the north of the town, whilst 10 Chiffchaffs and a female Black Redstart were in the horse paddock at Park farm. (S&SaH)
There was also a Firecrest and a Goldcrest around the hedges later on. (IP)


Ferry Pool: A Little Ringed Plover was again on the pool early this morning. (PH) Otherwise, there were four Avocets, one Black-tailed Godwit, three Shovelers and 22 Teal. (AH)

Ivy Lake: There were c50 Sand Martins, 20 Swallows and at least one House Martin over the lake this morning. (AB/AGB)

Church Norton: The two Ravens seen at the Bill were on the spit a short while after. (AB/AGB) There was not much else to report - though there were 80 Black-tailed Godwits and 60 Shelduck on the mud, and a couple of Chiffchaffs were singing near the Mound. (AH)
Later several more Chiffchaffs were around the area and at the back of the first Severals there was a Firecrest (S&SaH)
The Ravens had reappeared this afternoon on the spit, and there were three pairs of Red-breasted Mergansers in the harbour. (IP) 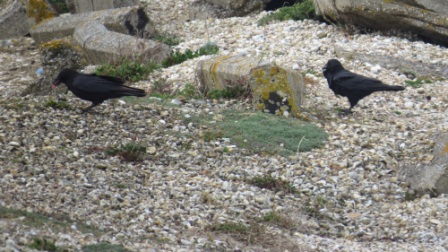 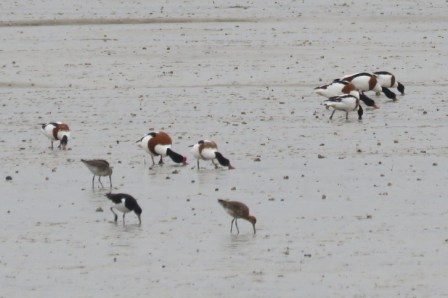 Shelducks, Black-tailed Godwits &and Oystercatcher at Church Norton (AH)
Medmerry (west side): There were 3 or possibly even 4 Little Ringed Plovers at the Stilt pool this morning (PH)