Monday, 12th December: A murky, dull and cloudy morning with moderate southerly-based winds, persistent heavy drizzle and the likelihood of more rain as the day progresses.....

A blog milestone quietly passed a few days ago when our 'page hits' counter went past the half-million mark - an unthinkable situation when I first set up the blog in March 2013. It wasn't long before my co-editor Andy House (AH) offered his services and his ideas, ability and enthusiasm quickly helped shape my thoughts for the future.....this included several amendments to the blog title on the way, covering the area of the whole Peninsula (rather than just Selsey and Pagham) and increasing photos to include daily contributions whatever the light or weather!
I hope readers will permit a bit of self back-slapping, but judging by many of the complimentary comments and feedback received, the blog is clearly doing something right. We are not complacent and in order not to stagnate may well try some subtle changes in the future - and indeed we have previously reviewed and adopted a number of factors following suggestions - but we think the key is to keep things current, relevant and simple. Having visited a good number of blog sites, it is apparent that this site is one of only a very few that actually puts out the current bird news on the day it is seen rather than the next day or worse, (ok, tweets excepted but you know what I mean), so useful if you are planning a visit. So far we have not missed a single day's news since the blog started (though it is bound to happen of course), but this is quite demanding and no easy task, especially when domestic and holiday commitments are factored in. We realised that additional help might be needed and were delighted when Bart Ives (BI) agreed to join the team. Being notably younger than AH and I, Bart is our techno man and is even able to re-tweet blog news - a real leap forward for us!
We plan to maintain our tried and tested operation for the foreseeable future and are very grateful to all readers and contributors for their interest, and hope the blog continues to be of use. Finally I must pay tribute to AH and BI for their enthusiasm, support and hard work, which makes all the effort worthwhile. (OM)

Church Norton: Somewhat surprisingly, given how dire the Bill was, there was quite a bit of activity off of the beach, with two 65 Gannets heading west, along with eight Kittiwakes, including two that dropped in with the gulls just offshore before heading back out to sea ,and two Red-throated Divers, plus another on the sea.
There were also four Red-breasted Mergansers and two Great Crested Grebes offshore, but just one Common Scoter, which flew in and landed on the sea. Along the beach there were at least 80 Mediterranean Gulls, plus a few Redshank and Grey Plover, whilst in the harbour the Long-tailed Duck was in the main channel, the Whimbrel was by the path to the beach and about 200 Brent Geese dropped in nearby. (AH) 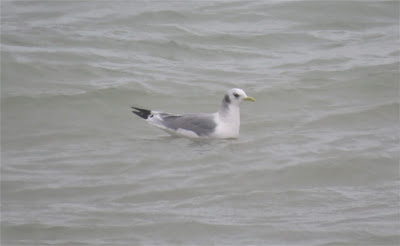 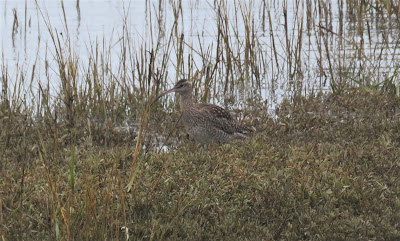 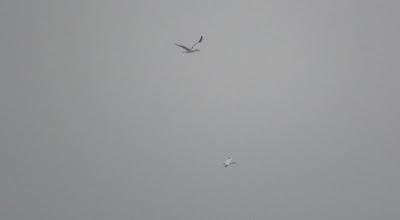 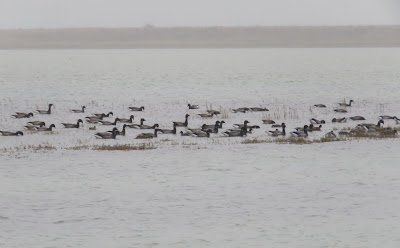 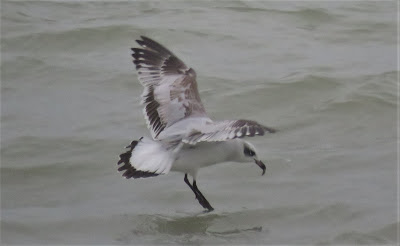 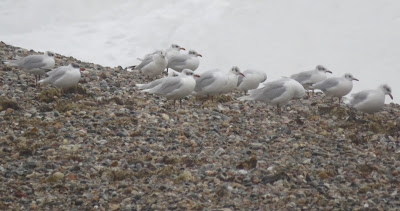 Ferry Pool: There were 22 Redshank, 60 Lapwing, eight Shelduck and 16 Teal on the pool this morning. (AH) 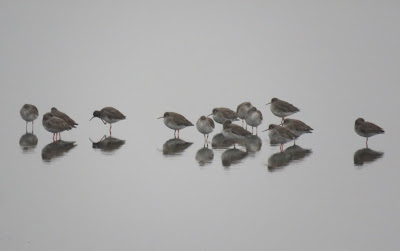 Redshanks on the Ferry (AH) 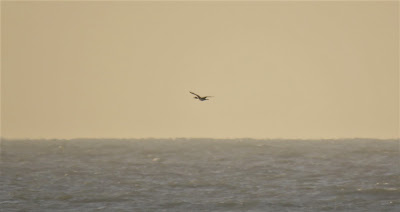 Great Northern Diver (above) & Red-throated Diver off the Bill (AH) 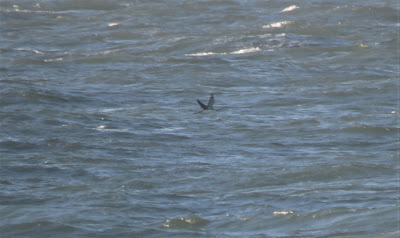 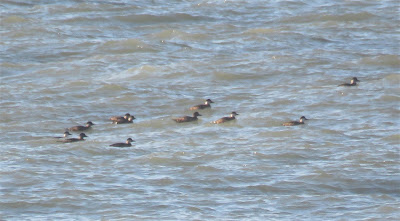 Park Farm, Selsey: The Dartford Warbler was showing again this morning, along with a Stonechat, and a Grey Wagtail was also present. (S&SaH/IP)


Church Norton: There were at least six Velvet Scoters off the spit this morning, (with at least 10 present later on) along with a dozen Common Scoter, five Slavonian Grebes, a couple of Great Crested Grebes and up to twenty Red-breasted Merganser between the sea and the harbour. Also, a loose flock of 14 Red-throated Divers went west, well offshore, and another was on the sea..


The Long-tailed Duck was again in the main channel in the harbour, around half a dozen Little Grebes were present, there were at least 60 Knot among the Dunlin, Turnstones and Grey Plovers roosting on the old harbour mouth.
There were also half a dozen Skylarks on the spit, a few Mediterranean Gulls along the beach and two Stonechats in the horse field.. (AH/BI/IP/PC)
Later on a Dartford Warbler showed briefly on the gorse opposite the first Several. (S&SaH) 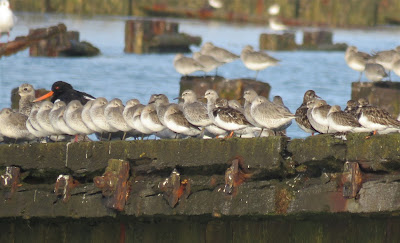 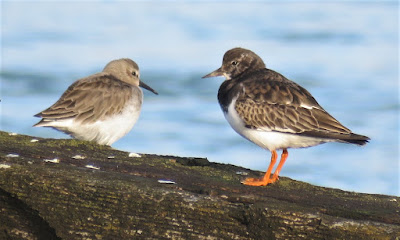 Ferry Pool: Just eight Teal and a Black-tailed Godwit on the pool, with another and a Redshank in the channel opposite and c80 Wigeon were on the field. (AH) Black-tailed Godwit on the Ferry (AH)

North Wall: A misty morning with a few clear intervals. On the Breech Pool there were 48 Mallard, 76 Teal, 2 Pintail and around 180 Wigeon who had been browsing in the back field, whilst along the Wall were 3 Redwing and up to 20 Reed Buntings.
Along Pagham Rife there were 36 Coot, a Grey Heron and a calling Cetti's Warbler, and on Honer reservoir there were a Green Sandpiper, 27 Tufted Ducks, 30 Coot and 5 Little Grebe.
In the same area there was a mixed flock of some 40 Linnet, 6 Reed Buntings and 11 Yellowhammers, and along Honer Lane there was another flock of 14 Yellowhammers. A Sparrowhawk shot across the horse field at Welbourne, and in my Pagham garden there were 13 Long-tailed Tits, a Coal Tit and a Great Spotted Woodpecker. (JDW) 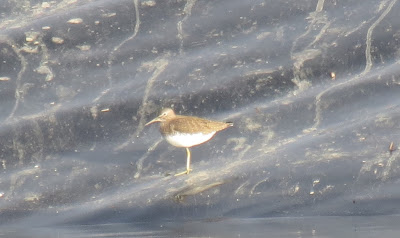 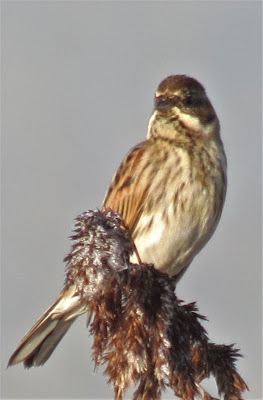 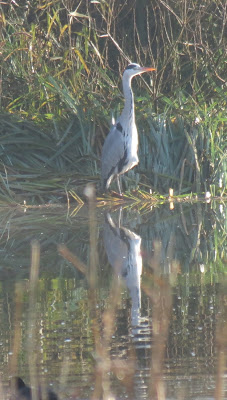 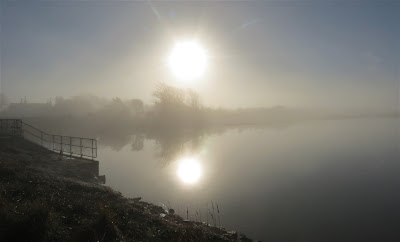 West Itchenor: A look around the Village Pond this afternoon produced a calling Nuthatch in the big gardens, a Coal Tit and plenty of Goldcrests. (IP)

Medmerry: Easton Lane to the Stilt Pool - It was fairly quiet this afternoon, with highlights of a Merlin, three Kestrels, three Stonechats, 50 Golden Plover and 300+ Lapwing. (S&SaH)

Saturday, 10th December: A very gloomy and grey day, with heavy cloud cover, but dry and fairly mild, with a modest westerly breeze....


Ferry Pool: There were 20 Lapwing and a dozen Teal on the pool this morning. (AH)

Long Pool: Early this morning a Kingfisher flew over and across the field before dropping into the rife and a Spotted Redshank flew around calling, but beyond that it was quiet, save a few Goldcrests and Long-tailed Tits. At at the far end of Ferry Channel there were c30 roosting Avocets and c60 Shelduck out on the water. (AH) 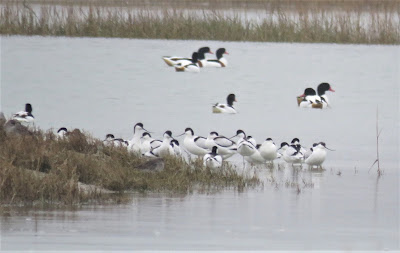 Church Norton: A very late Swallow flew low over the orchard at Greenlease Farm at around 10 o'clock this morning, heading towards Selsey. Also there were a couple of Stonechats in the horse field and a Sparrowhawk at Park Farm, Selsey. (S&SaH/IP)
The Long-tailed Duck was showing quite well in the harbour this morning, whilst offshore there were three Velvet Scoters and six or seven Common Scoters and Red-breasted Mergansers, plus a few Common and Mediterranean Gulls, but no grebes at all.
There were another half a dozen Red-breasted Mergansers in the harbour, plus a Great Crested and half a dozen Little Grebes, and among the large numbers of commoner waders were at least seven Bar-tailed Godwits, ten Black-tailed Godwits and the Whimbrel. (AH) 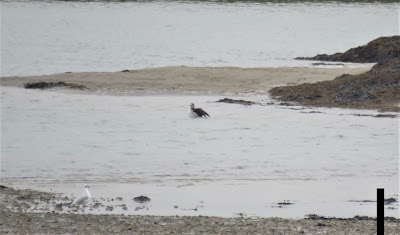 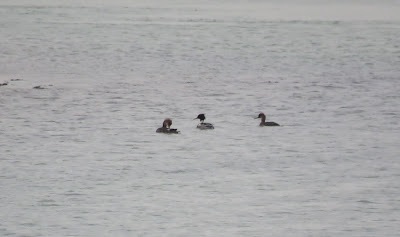 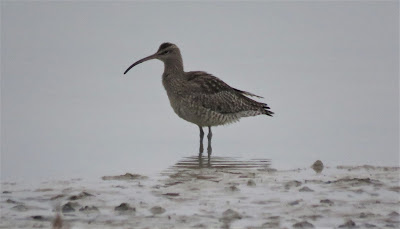 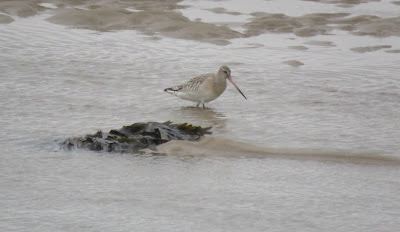 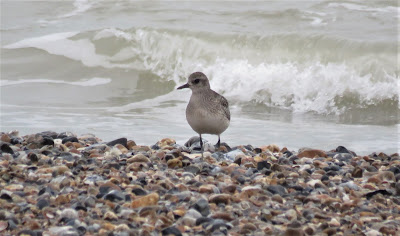 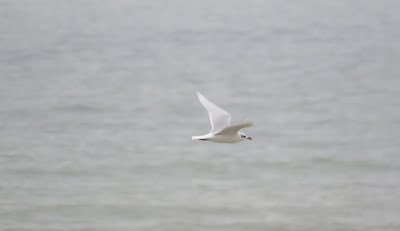 Ivy Lake: The 1st-winter Scaup was present again early this morning, though not later on, with c.25 Tufted Ducks and a good count of at least 75 Common Pochards. Along with the usual Herring Gulls on the water & buoys were six Common Gulls and there was a Bullfinch along the hedgerow. Nunnery lake held its familiar Gadwall and seven Tufted Ducks but the rest of the lakes were fairly quiet apart from Great Crested Grebes and Coots. A mixed flock of Long-tailed Tits, Blue Tits & Great Tits were along the paths and there were two Chiffchaffs near the parking. (BI)

East Head: Rather gloomy overcast mild day with a light south westerly wind, sea conditions were relatively calm.On a falling tide we walked out down the west side finding plenty of Sanderling feeding along the tide line with perhaps 80 birds in loose flocks.
At the northern tip we spent some time scanning the calm seas finding a very distant Great northern Diver and the usual flocks of  20+Red-breasted Mergansers  and 18 Great  crested Grebes. A lone female Common Scoter was confiding.
A small  dark warbler flitting  around feeding in the sand cliffs had my pulse racing for a moment  although we soon realised it was a Chiffchaff ! On the mud flats  a couple of Knot and 4 Golden Plover amongst the more regular feeding waders.Returning via the east side a Stonechat and single Reed Bunting were added to our bird list. During lunch the regular Mediterranean Gull was loafing around the car park waiting for a few scraps. (BFF and the SOS)

Snowhill Creek: After lunch we took the path to Snowhill Marsh and Ellanore there were plenty of Meadow Pipits and Pied Wagtails feeding on the grass.This winter the number of Brent Geese  appear to be less  with no large flocks feeding in the usual areas .On Snowhill plenty of Wigeon & Teal were feeding plus a few Black tailed Godwits  and  Snipe, they were doing there best to hide amongst the vegetated islands.
Off Ellanore point we counted 130+ Golden Plover roosting in a tight flock on the mudflats and nearby a few Bar tailed Godwits.  A confiding Rock Pipit  was feeding along the foreshore  . 4 delightful Sandwich Terns in winter plumage were feeding close inshore, all called Eric! Returning along Ellanore Lane we found a calling Goldcrest which showed well  2 Great spotted Woodpeckers flew over as did  a  dashing Sparrowhawk.
In the sallow thicket along the entrance road we had a stunning Firecrest that brighten up a dull afternoon and near the Hide a pair of Stonechat put on a good display. A Common Buzzard was not happy being disturbed from its perch on the roof of the hide! (BFF and the SOS)