Tuesday, 6th December: A thoroughly pleasant morning, if a little misty, with light winds and a bit warmer than of late.....but becoming murky again later.

Selsey Coastguard Station: There were 112 Common Scoter offshore this morning, but there was nothing else to be found. (AH) 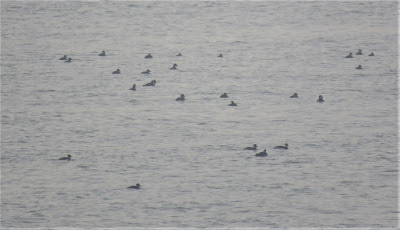 Ferry Pool: On the pool this morning there were seven Shoveler, six Lapwing and 25 Teal. (AH) 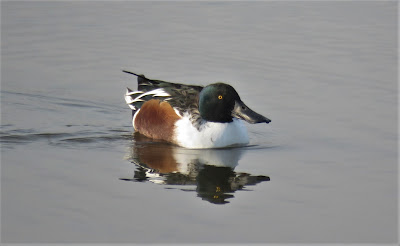 Shoveler on the Ferry (AH)

Pagham Lagoon and Spit: It was generally very quiet on the Lagoon, with just five Pochard, 12 Wigeon and c20 each of Tufted Duck and Little Grebe of note.
The Spit was quiet, too, with just a dozen Skylarks on it, a pair of Red-breasted Mergansers in the main channel and a few Mediterranean Gulls offshore, besides the usual wadrs further down the harbour. (AH) 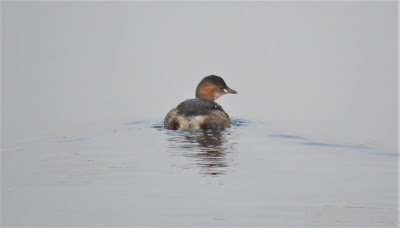 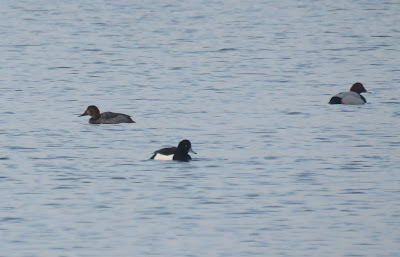 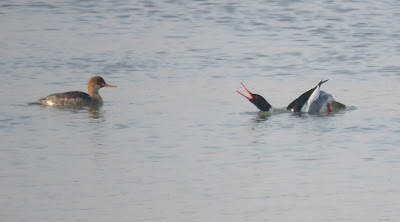 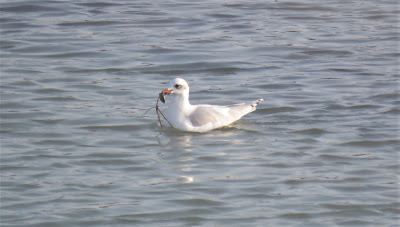 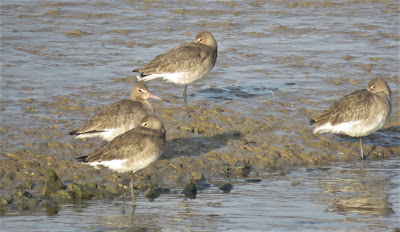 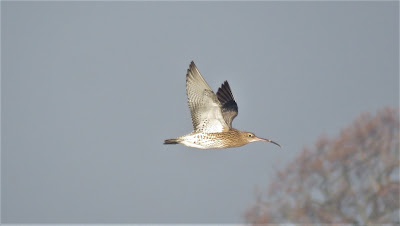 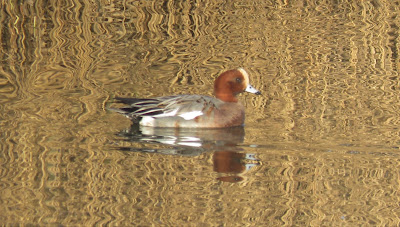 Itchenor Pond: Having made my first visit last week, I decided to return and spend a bit more time working the  area of the village pond and adjacent small woods this morning. Highlights were a Firecrest and 2 Treecreepers (the latter still a fairly scarce Peninsula bird), whilst other species logged included a Buzzard, 10 Goldcrests, at least 4 Chiffchaffs, 2 Bullfinch,  a Green Woodpecker, 3 Great Spotted Woodpeckers and 2 Mistle Thrushes. (OM) 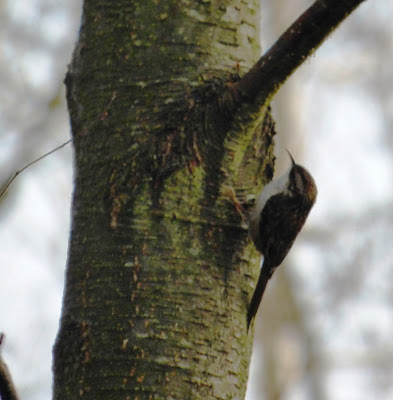 Treecreeper at Itchenor Pond and the Interpretation Board at the site. (OM) 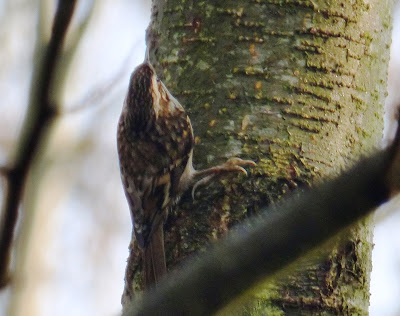 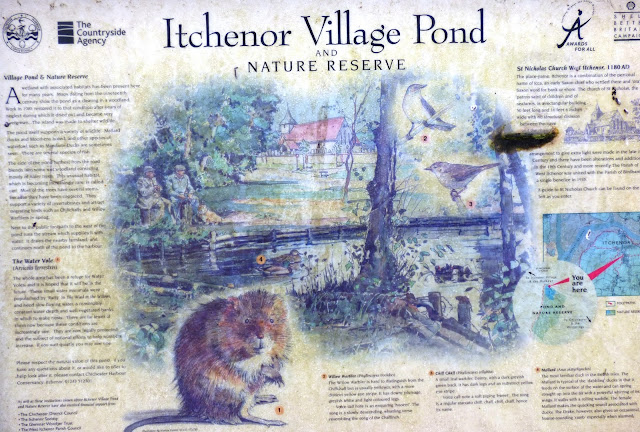 Monday, 5th December: At last a drop in the wind velocity, leaving a bright and pleasant, if brisk, day.....

West Wittering: Sadly there was no sign of the Stone Curlew at Ella Nore this morning. (BI)

Ferry Pool/Long Pool: Early this morning there was just a single Lapwing, two Redshanks and a dozen Teal were on the pool, with 100 Wigeon on the field.
There was nothing save a couple of Goldcrests and a couple of Reed Buntings along the Long Pool, whilst in Ferry Channel there were up to ten Black-tailed Godwits and Grey Plovers, plus plenty of Redshank and Teal, with six Avocets at the far end. Also at least 500 Brent Geese came out of the harbour going west, and a few Wigeon and Shelduck were going the other way. (AH) 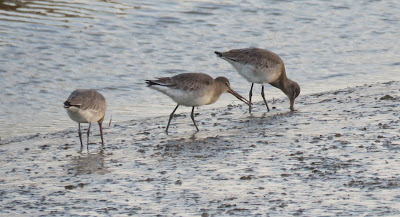 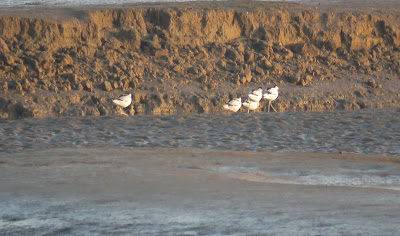 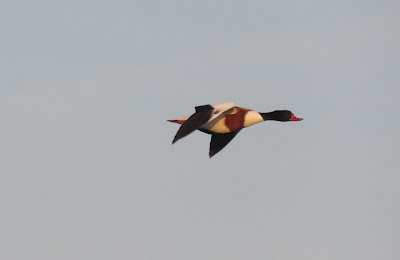 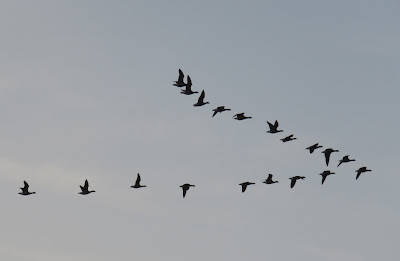 Church Norton: Early this morning a Tawny Owl was being noisily mobbed in the churchyard before retreating to the Priory. (A&YF)
Later on, a quick look produced the two Peregrines on their island, a Buzzard flying out to Tern Island, and a Red-breasted Merganser and two or three Great Crested and Little Grebes in the harbour, plus four Bar-tailed and ten Black-tailed Godwits, with up to a dozen Skylarks along the spit. (AH) 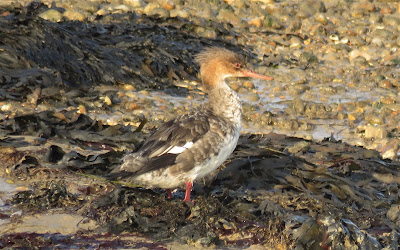 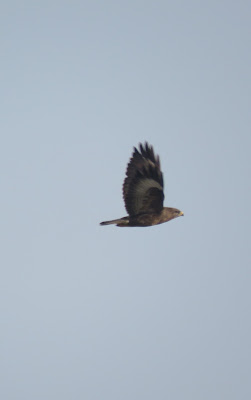 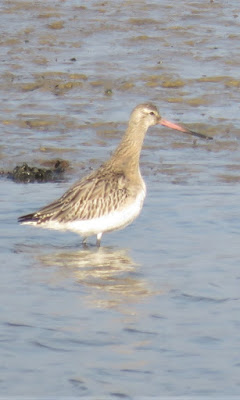 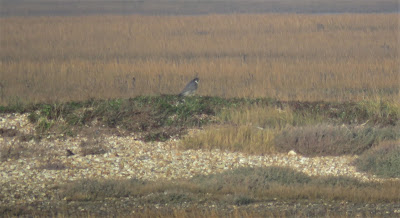 Medmerry: Early this morning there was a Dartford Warbler on the gorse opposite the track leading up to the Earnley car park, and the Scaup was on the Stilt Pool, accompanied by four Shovelers. (GT)

Sunday, 4th December: Another crisp and bright winter's day, sunny but cold, with a moderate to fresh E/NE wind....

West Wittering: News of a late Stone Curlew south of Ellanore Point at 1202hrs.....spotted flying in by John Kelsall, walking with the Chichester RSPB local group. It then gave good but hard to find views before settling down on the mud in the distance. (Directions: Walk south from Ellanore hide - through the first path that has bushes growing either side, then first field after that on your left. Row of popular trees - in line with telegraph pole to left of trees) (with thanks to KJ).  (An amazing record for the time of year - and once again none of the Peninsula 'regulars' was involved in finding it....which sadly has been a bit of a theme with the finding of our scarce birds this year! Eds). At East Head, the Snow Bunting was still present at the northern tip. (R.Wren)
The Stone Curlew was still present late afternoon (M&KG) 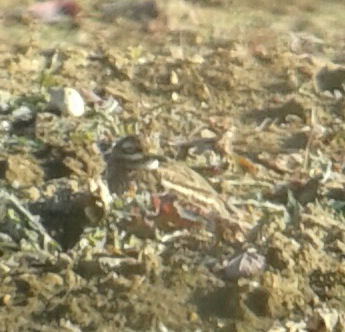 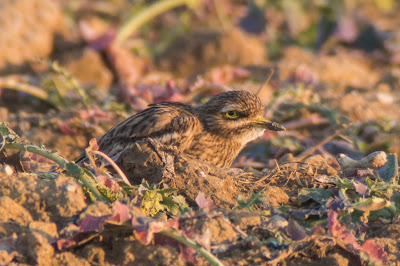 Also seen today were the Snow Bunting on East Head, a Black Redstart between the beach huts opposite the West Wittering Cafe, and in the harbour were a Great Northern Diver and a Common Scoter, plus a few Red-breasted Mergansers, with at least one Greenshank towards Snowhill Creek. (M Sharp)


Coastguard Station: There were still c45 Common Scoter offshore this morning, plus half a dozen Red-breasted Mergansers. (AH/BI) 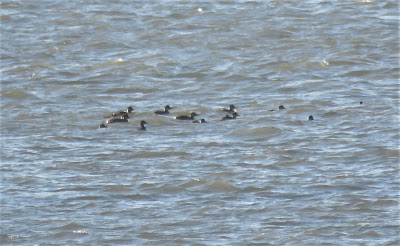 Ferry Pool: There were just one Green Sandpiper, one Black-tailed Godwit, two Redshank and 20 Teal on the pool, with c80 Wigeon on the fields. (AH) 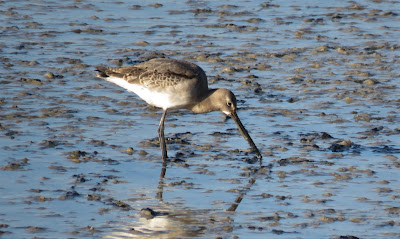 Black-tailed Godwit (above) & Wigeon on the Ferry (AH) 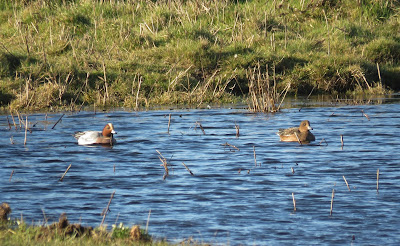 Church Norton: Not much in the harbour of note, though there were five Lesser Black-backed Gulls among the Great Black-backs, at least 100 Shelduck and a dozen Black-tailed Godwits present; also an Avocet, 2 Bar-tailed Godwits, six Red-breasted Mergansers and five Little Grebes.
Two Peregrines were active with a kill out in the middle, plus a Buzzard on the saltings,  whilst a Chiffchaff and a couple of Goldcrests were around the car-park and there were 50 Lapwing along Rectory Lane and a Stonechat near Park Farm (AH/IP/S&SaH/EL/DM/RI) 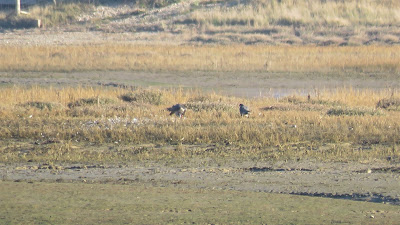 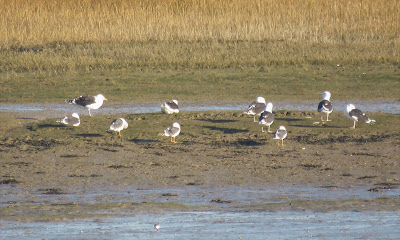 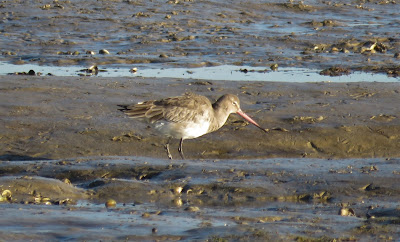 Medmerry: Easton Lane to the Stilt Pool - This afternoon the first-year Scaup was still on the big pool opposite the farm, a Marsh Harrier was out hunting and two noisy Greenshank were around the Stilt Pool. Also seen were a Snipe, a Stonechat, a Peregrine, two Buzzards and four Kestrels. (S&SaH) 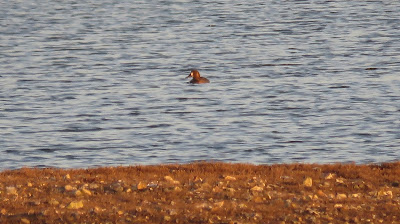 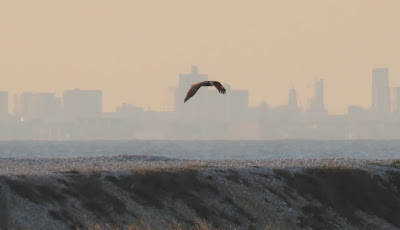