Wednesday, 3rd October: A clear start to the day with a gentle westerly wind and the possibility of light cloud later in the day...

Church Norton: The Great White Egret was present for its fourth day this morning, out in the harbour with a few Little Egrets. This evening there were six Stonechats in the horsefield and in the churchyard were three Jays, a Mistle Thrush, a Green Woodpecker & a few Chiffchaffs & offshore tonight opposite the Severals there was a Guillemot fairly close in. (AW) 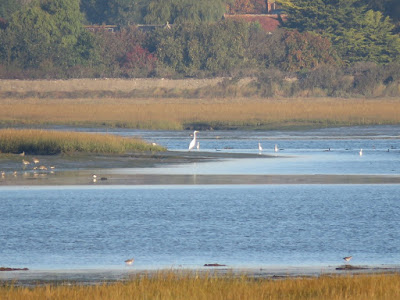 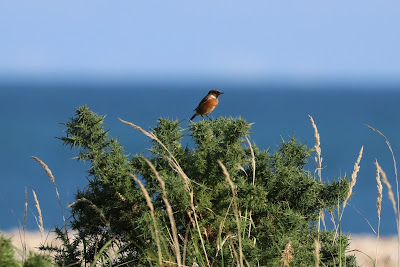 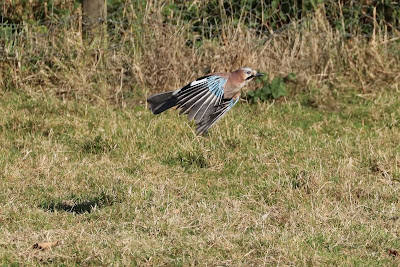 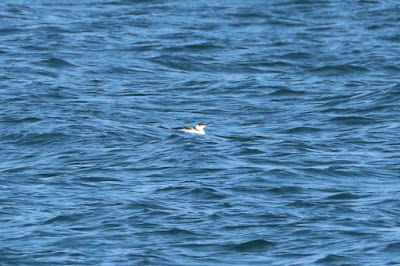 West side: The Great White Egret was present down the west side this evening before disappearing into one of the channels, a Marsh Harrier was seen over the northern edge of the habour and there were six Chiffchaffs in the hedges. (SH/SaH)

Ferry Pool: Mid-morning there were 74 Lapwing, 10 Shelduck, 9 Teal, a Snipe and one Stock Dove on the pool and a Buzzard over. Ferry Channel held 115 Teal and a Curlew and a Grey Heron whilst a Cetti's Warbler was nearby. (C&ME). Later in the day a flock of 21 Grey Partridges (presumably releases as per the Red-legged Partridges in the area) flew past the Long Pool/Ferry Channel and into an adjacent field. (NBd) The Great White Egret appeared again the channel at 1630hrs today. (IL)

North Wall: There were plenty of waders on the Breech Pool, including 100+ Black-tailed Godwits, similar of Redshanks, two Dunlin, 15 Snipe and ten voraciously feeding Spotted Redshanks. A Water Rail was on the mud at the back and there were also good numbers of Teal and Wigeon present. White's Creek was short on variety but there were at least 200 Wigeon here as well as six Pintail and there c.40 Lapwing on the shoreline nearby. (BI/IB et al) Thirty Snipe were present on the pool this afternoon as well as 11 Spotted Redshanks and there was a Wheatear along the wall. (NBd) 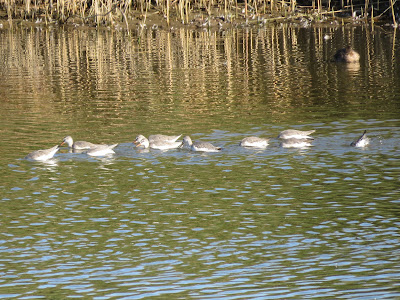 Spotted Redshanks, above, and Water Rail at the North Wall (BI) 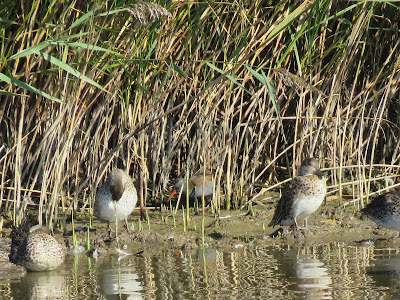 Ivy Lake: There was a Hobby hunting over the lake late this afternoon. (AB)

Tuesday, 2nd October:  A overcast start to the day with a westerly breeze, cloud cover set to last all day...

Church Norton: The Great White Egret was on show near the old harbour early on (see below) feeding on a shoal of fish with a large gathering of Little Egrets, Cormorants and Black-headed Gulls and there was a Marsh Harrier, possibly the same one as seen later near the Ferry, over the harbour. (AW) Later in the morning the Great White Egret was showing well from the benches, the Marsh Harrier was about again as was a Red Kite and there was a Spotted Flyctacher in the churchyard. (KJ)  This evening there were six Sandwich Terns feeding in the harbour, with another two offshore, and along the front were four Stonechats, a Blackcap, six Chiffchaffs & a Cetti's Warbler as well as five Kestrels, a Sparrowhawk and four Jays. The Spoonbill was also seen to be roosting over on the Pagham side. (SH) 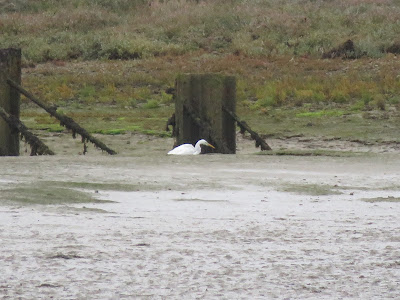 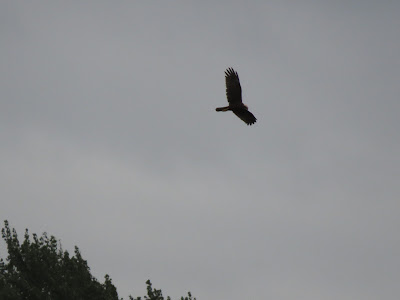 North Wall: There were at least 200 Wigeon in White's Creek this morning as well as half a dozen Pintail, a Greenshank, a Spotted Redshank and c.40 Redshaks. The Breech Pool held at least 13 Snipe, eight Spotted Redshank, a Dunlin, 16 Black-tailed Godwits and 50 Teal and along the reeds were two Reed Buntings. Two Ravens flew over the horse paddocks but it was generally quiet for smaller birds with only two Chiffchaffs seen. The Great White Egret was viewable at distance by the old harbour at Church Norton and a Spoonbill was seen to fly from there towards the east side. (BI/IH/KJ) 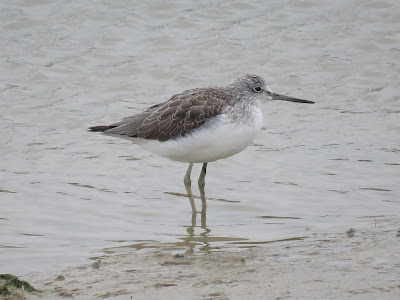 Greenshank, above, & Snipe at the North Wall (BI) 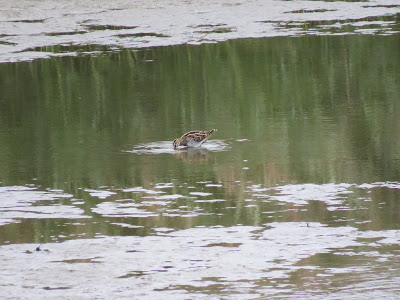 Ferry Pool: Three Spotted Redshanks and a Kingfisher were along Ferry channel this morning with a Marsh Harrier overhead. (KJ) A Spoonbill was in the channel feeding at 1045hrs. (MJ) and the Great White Egret (which is obviously a fairly mobile bird!) was on the Long Pool briefly at 1030hrs and on the Ferry Pool were 44 Teal, 82 Lapwing, ten Shelduck and a single Stock Dove. (C&ME)

Monday, 1st October: A  chilly morning out of the sun, but warm in the sheltered spots, with a breeze from the NW veering westerly later in the day...

Church Norton: The Great White Egret was present this morning out in the middle channel in the harbour keeping the company of a Spoonbill, before both flew off in the direction of the Ferry Pool. Elsewhere, there were still at least eight Stonechats & 20 Meadow Pipits around the horsefields, c.20 Chiffchaffs were along the beach front bushes and  two Jays and a Green Woodpecker were behind the hide. The churchyard held c.10 Chiffchaffs and three Blackcaps as well as a Mistle Thrush and a Raven flew over Priory Wood.  (BI/AW) The Marsh Frogs were still showing on their small pool between the Severals and a worn Small Copper butterfly was in the same area. (A.MacIntyre) A look this evening offered a Goldcrest with a small mixed flock in the churchyard whilst in the harbour were 90 Grey Plovers and 12 Knot joined from off the sea by five Brent Geese and a company of Wigeon. (AW) 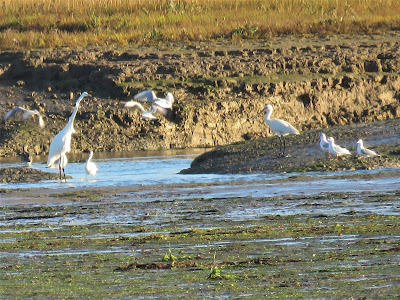 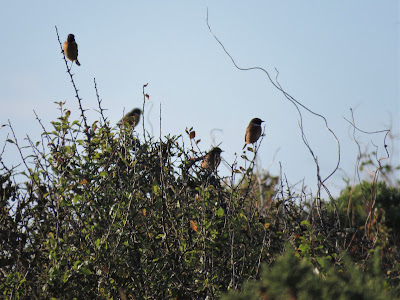 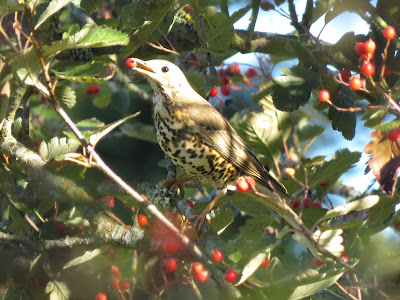 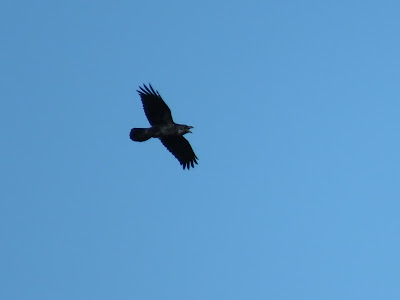 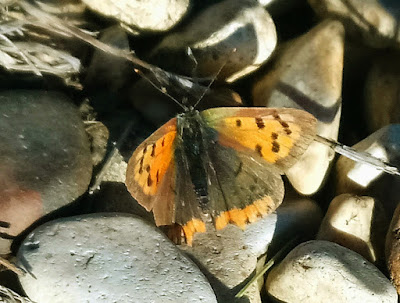 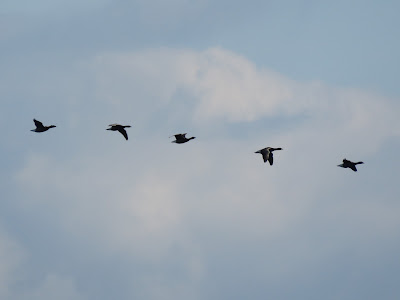 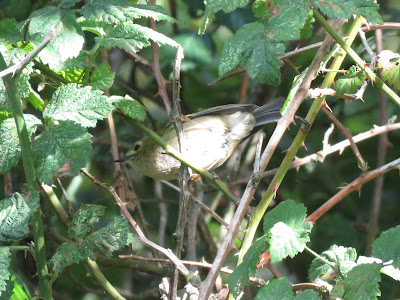 Ferry Pool: There was not a great deal on the Ferry Pool this morning but there were still 12 Shelduck, a solitary Wigeon, 20 Lapwings and three Black-tailed Godwits to be found. In Ferry Channel there were six Spotted Redshanks, a Whimbrel,  a Snipe, hundreds of Teal and good numbers of Redshank. A quick circuit of the Tramway produced 12 Blackcaps and 6 Chiffchaffs whilst along the Long Pool were seven Stonechats, a further ten Chiffchaffs and in the fields opposite c.20 Red-legged Partridges. (AH/BI/AW) Mid-morning there were 120 Lapwing, 32 Teal & 8 Shelduck on the Ferry Pool and a Lesser Whitethroat was along the tramway. (C&ME/TG-P) Late this afternoon the Great White Egret was showing nicely in Ferry channel and a Short-eared Owl flew over Ferry field. (IL/RHa/AW) 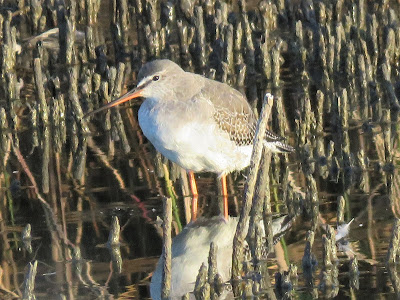 Spotted Redshank, above, and Stonechat at the Long Pool (BI) 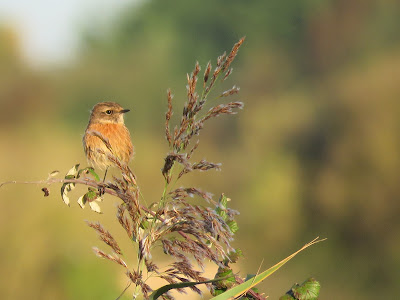 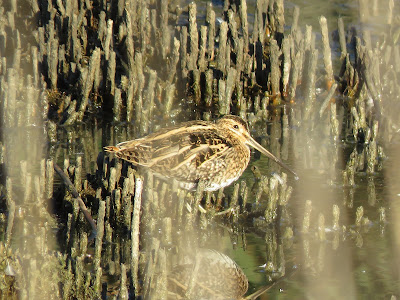 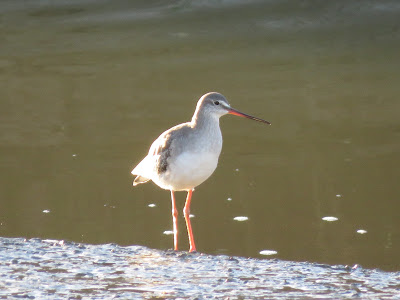 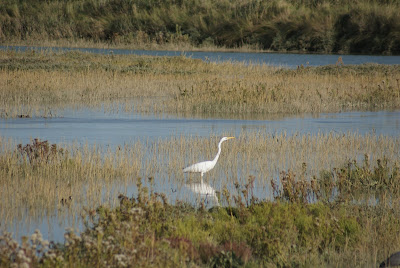 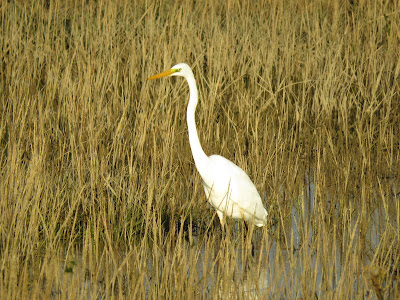 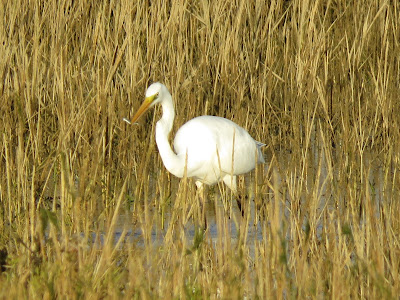 North Wall: A Spoonbill was on show this afternoon and there were two Cattle Egrets in with the cattle behind the North Wall. (RHa)

Medmerry, Easton Lane to the Stilt Pool: There were two Barn Owls out hunting this evening and a Short-eared Owl could be seen towards Ham & other raptors included five Kestrels and a Peregrine. The banks held 20+ Yellowhammers, two Corn Buntings, four Chiffchaffs and a Cetti's Warbler whilst waders in the area included two Greenshanks and at least 40 Black-tailed Godwits. (S&SaH) 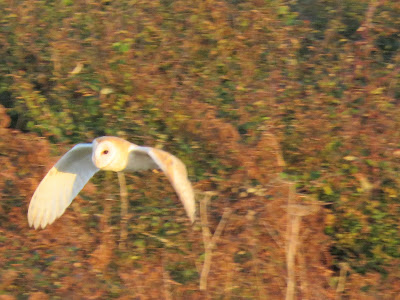 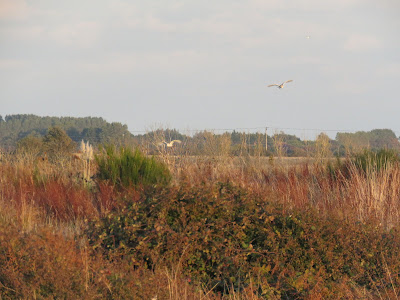