Saturday, 6th October: A gloomy start, rain coming in around mid-day with a gusty wind from the NNE...


North Selsey: A Merlin shot through our garden after the Goldfinches this morning. (SH)

Church Norton: There were at least six Stonechats at the horsefield this morning and a Kestrel was nearby. Four Pied Wagtails were along the beach and there were three Chiffchaffs in the bushes whilst overhead were 12 Swallows, four Skylarks and 20 Meadow Pipits. On the second Several were seven Shovelers and another plus two Gannets went west offshore and three Brent Geese flew into the harbour from the sea. There were also four Jays, two Mistle Thrushes, a Great Spotted Woodpecker and a loe Chiffchaff i the churchyard. (SH/SaH/AW/P&JW) 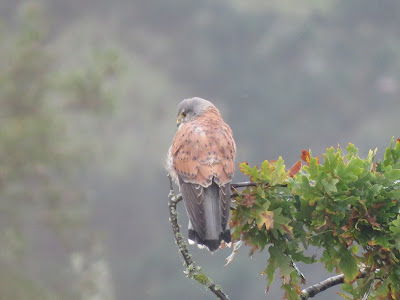 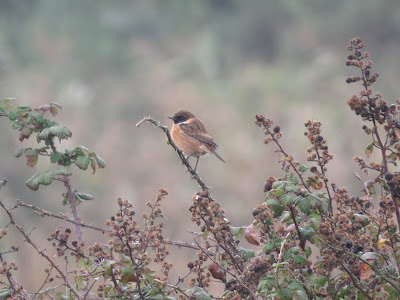 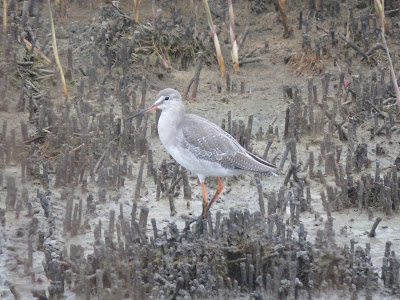 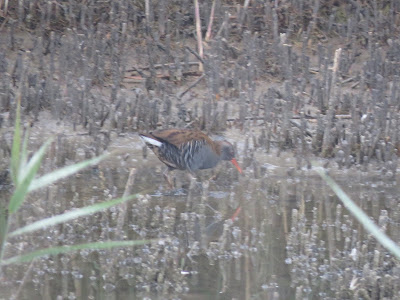 North Wall: There were seven Spotted Redshanks, c.20 Snipe, two Grey Plovers, four Dunlin, four Greenshank and c.100 each of Redshank & Black-tailed Godwits on the Breech Pool this morning. In the harbour there was a single Spoonbill but White's Creek was generally quiet at high water. The Lapwings were very flighty, one flock also contained three Snipe, but the miscreant could not be found and along the hedges were a few Stonechats, Cetti's Warblers and a small mixed flock. Meadow Pipits were constantly moving overhead. (BI) 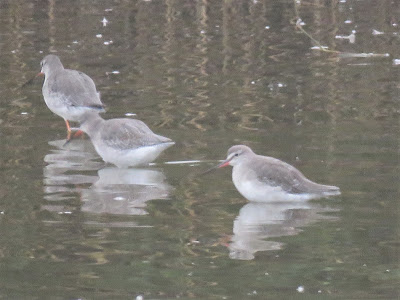 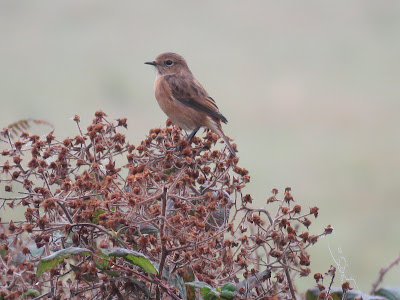 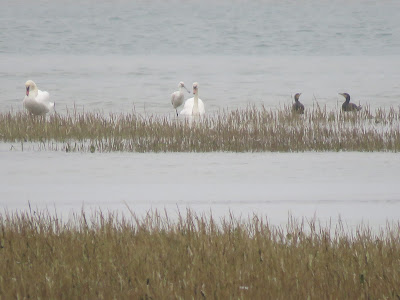 Pagham Lagoon/Spit: There was nothing other than six Little Grebes on the main lagoon with a further nine on Little Lagoon. Also here were four Redshanks & 30 Turnstones whilst along the spit were two Rock Pipits and a flock of Greenfinches. (BI)

Friday, 5th October: A  bright and clear day with a light wind from the SW...

Medmerry, Easton Lane to the Stilt Pool: A Spoonbill was showing well on the Stilt Pool this morning and there are now three Black Swans present. Plenty of Teal, a few Wigeon and Lapwing were also present and a few Meadow Pipits were along the pool edges. Elsewhere, there were at least 10 Stonechats, good numbers of Meadow Pipits, a dozen Skylarks and similar of Reed Buntings along the banks and paths. The car park at Easton lane is now set to be closed until October 12th and it's fair to say work was not exactly continuing apace today, hopefully the access improvements will be worth the wait. (BI) 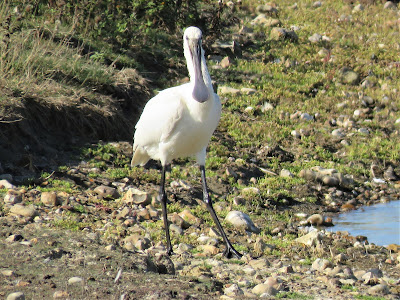 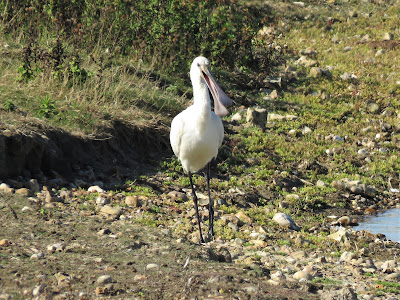 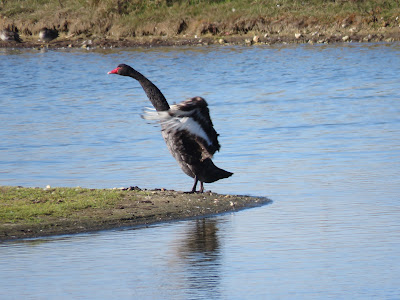 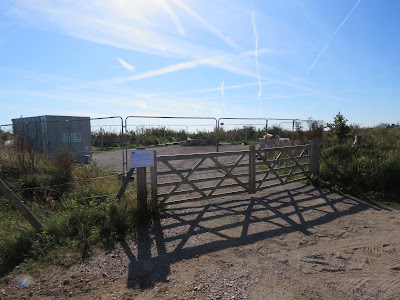 North Wall: The Breech Pool had 22 Snipe, a Spotted Redshank, four Dunlin, c.40 Black-tailed Godwits and 2+ Greenshank on the mud early this morning but White's Creek was largely quiet with just a few Redshank around. Around the wall and Halsey's Farm the most obviously abundant birds were Reed Buntings with at 25 seen on the circuit. There were also a few Blackcaps, a Chiffchaff, two Cetti's Warblers and two Skylarks in the hedges and fields. Meadow Pipits were constantly overhead and a House Sparrow was on the silt near the sluice at the creek. (BI/IH et al) 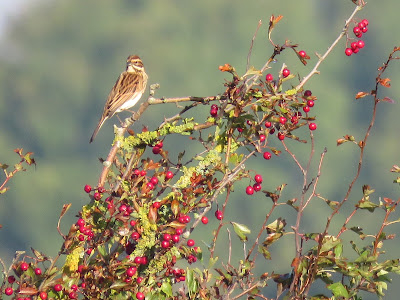 Church Norton: Early on there were two Great Spotted and one Green Woodpecker along with a Mistle Thrush in the churchyard. Along the path to the beach there were a couple of Reed Buntings and four Meadow Pipits. There were at least five Stonechats on the old horse-field, while along the spit there were a dozen more Meadow Pipits, two Skylarks overhead and a Rock Pipit. A Kingfisher was fishing from the old pier before being chased by gulls. (AW) 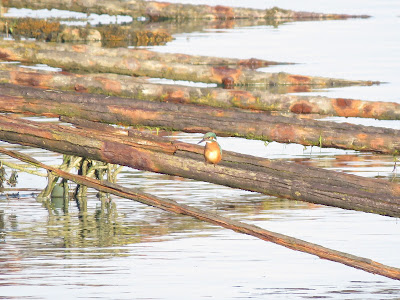 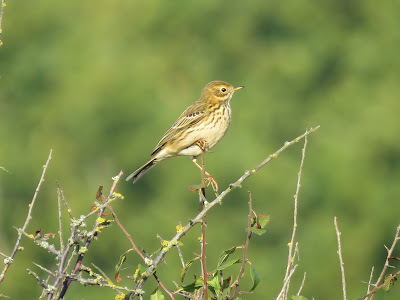 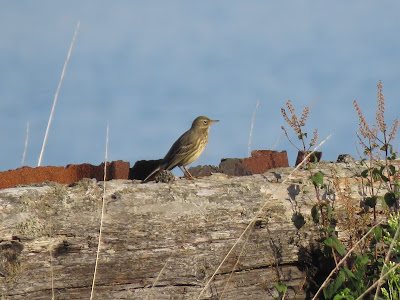 This evening there were 100 Swallows overhead with a Mistle Thrush also present. (SH/SaH)

Ferry Pool: There were four Black-tailed Godwits, 70 lapwings, a Pied Wagatil, 22 Shelduck and 18 Teal at the pool today. (C&ME)


Thursday, 4th October: A very misty and murky start to the day with light drizzle and a light wind from the SW veering W...a possibility of a break in the cloud later...

Ferry Pool: A Common Sandpiper was on the pool this morning along with 7 Black-tailed Godwits, 24 Teal, 21 Shelduck and 72 Lapwing. (C&ME)


Church Norton: There were three Mistle Thrushes in the churchyard this morning and a Song Thrush was along the main path. There were also a few Blackcaps and Chiffchaffs in the hedgerows and singles of Green & Great Spotted Woodpeckers were in the vicinity. Offshore three Shoveler were visible through the mist and murk. (AW) Late afternoon found a Hobby and a male Merlin over the shoreline just down from the car park and a Common Gull, four Rock Pipits, a Kingfisher and a Bar-tailed Godwit near the harbour entrance. (BO'D/AW) 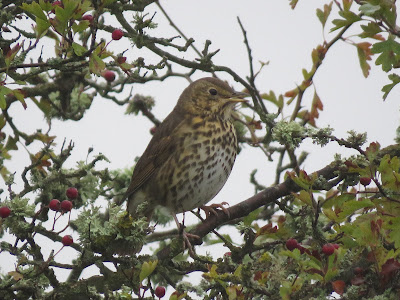 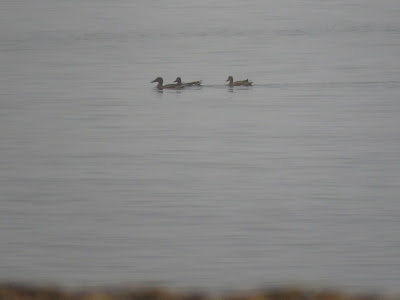 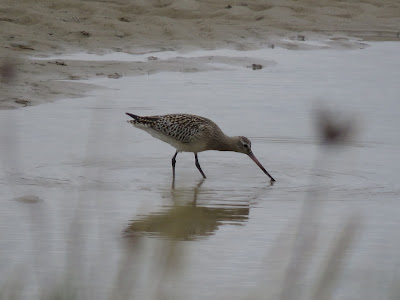 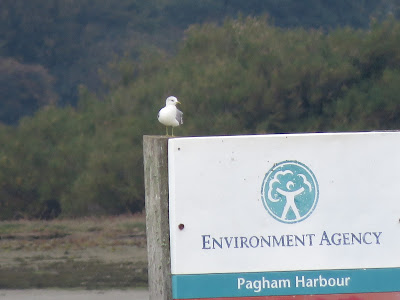 North Wall: The Breech Pool looks perfect at the moment for a scarcity to pop in: plenty of nice muddy margins, we shall see..! Today there were 11 Spotted Redshanks, nine Snipe and c.60 Black-tailed Godwits on the mud and a scattering of Teal and Mallards on the water. White's Creek was much the same as yesterday with good numbers of Wigeon and a dozen Pintail present. A Sparrowhawk was along the wall and there were a few Chiffchaffs and a small mixed flock along the hedges. (BI) Two Spoonbills were seen distantly from the wall today out on the mudbanks. (T.Davies per SOS) 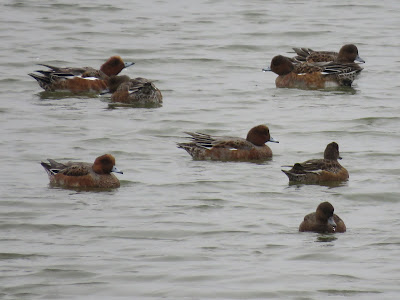 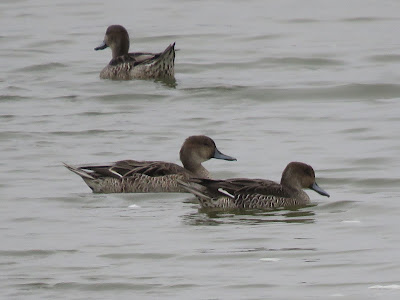 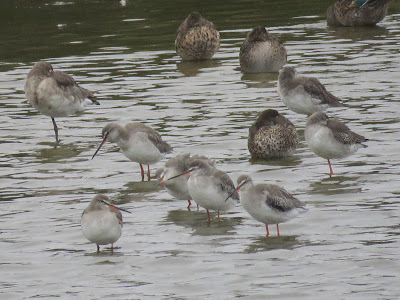 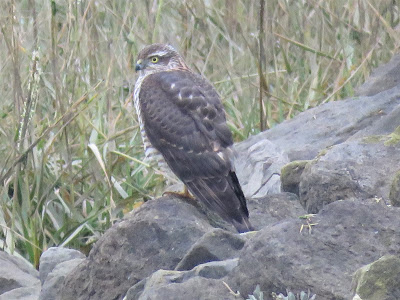 Medmerry, west side: Two Short-eared Owls were around the viewpoint at Ham at c.930hrs this morning (BO'D) and the Hooded Crow was also present, after going missing for a good while, seen this afternoon from the double benches (per Birdguides). This afternoon a female Peregrine and a female Merlin were hunting successfully with the Peregrine taking a Wood Pigeon and the Merlin a Meadow Pipit. (BO'D)