Thursday, 16th January: A better start to the morning, with a fresh south-easterly blowing, but with some sunshine earlier on before heavy cloud and impending rain moved in.......... 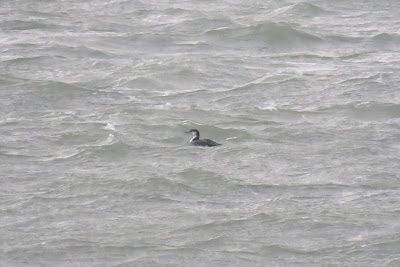 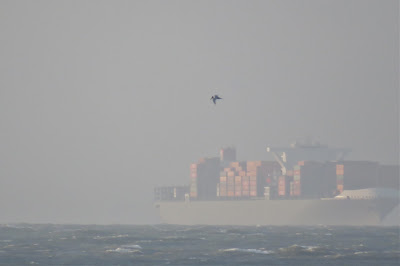 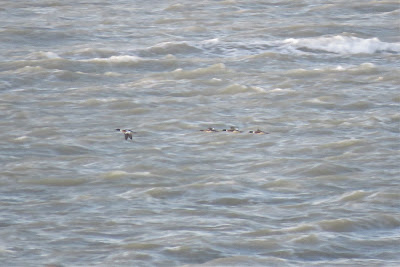 Ferry Pool: The pool was empty, save two Shelducks, whilst the flooded parts of the field produced c40 Shoveler, c100 Teal and Wigeon and at least 200 Lapwing. (AH) 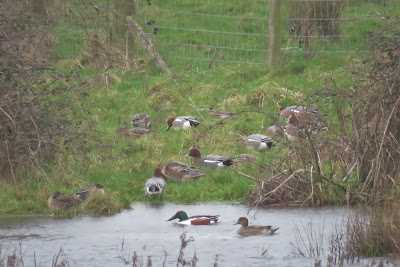 Shovelers and Wigeon at the Ferry (AH)

East side/Pagham Spit: A look along the side of the harbour produced c400 Black-tailed Godwits, c200 Golden Plover, c300 Lapwing, c100 Knot and two Bar-tailed Godwits, whilst towards the spit there were two female Goldeneyes, two female Red-breasted Mergansers and two Great Crested Grebes and the Peregrine on its island.
There were also a Shoveler and a few Pintail among the Wigeon and Teal and four Greenfinches and a  few Linnets and Skylarks were on the spit, but the Lagoon remains devoid of birds, with just two Little Grebes and a single Great Crested Grebe present. (PB)

North Wall: A brief visit this morning showed that the fields were much more flooded and contained numerous Wigeon together with Shelduck, Shoveler, and modest numbers of Curlew and Brent Geese. (IH)

Drayton Pits: A Coal Tit was along the hedges again this afternoon, and there were also two Bullfinches nearby. (IP)

Fishbourne Creek: The tide was quite low this morning, but there were still five Goldeneyes and a couple of Red-breasted Merganser off Dell Quay, along with a Spotted Redshank and a Greenshank.

Another Greenshank was near the Lavant outflow, along with large numbers of Wigeon and Teal, plus at least 300 Common Gulls. Also in the area were two Grey Wagtails, at least half a dozen Rock Pipits and a Stonechat, whilst a Chiffchaff and a few Long-tailed Tits were by the reeds. (AH/IP) 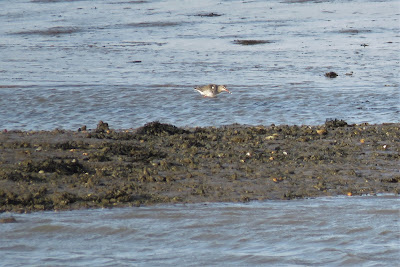 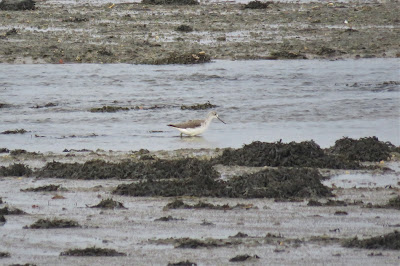 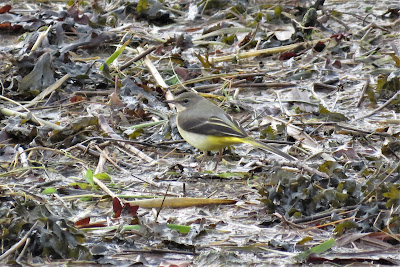 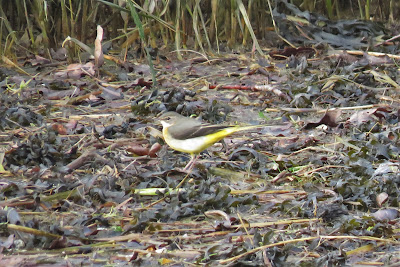 Wednesday, 15th January: A morning that started with a moderate westerly and heavy rain, easing to drizzle as the wind dropped temporarily and finally a bit of sun as the breeze freshened once more.....

Ferry Pool: Four Tufted Ducks - the only birds present at midday - were a reflection on the very high water level on the pool, whilst the floods in the field held c40 Shoveler, c100 Wigeon and c200 Lapwing. (AH) 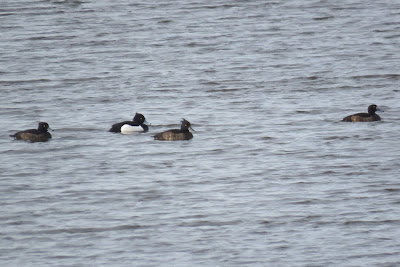 Tufted Ducks on the Ferry (AH)

North Wall: A Barn Owl and a Marsh Harrier both came out to hunt over the reeds as the rain eased this morning, as did the Kestrel around the paddocks, where there were also a Grey and two Pied Wagtails, and a Raven flew in from the north and settled on the trees at the back.
The fields north of the wall were thick with birds, including at least 400 Wigeon, with 50+ Teal , 20 Shoveler and a handful of Pintail among them, at least 100 Black-tailed Godwits, at least 200 Lapwing and c50 Curlews.
There were at least another 500 Lapwing, 200 Golden Plover and 200 Black-tailed Godwits out in the harbour and c1500 Brent Geese flew out to fields towards Marsh Farm. (AH/IH) 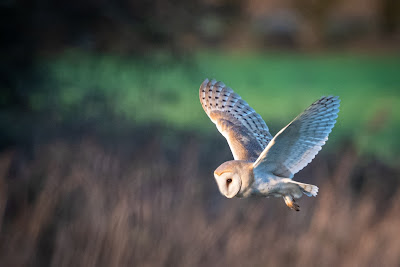 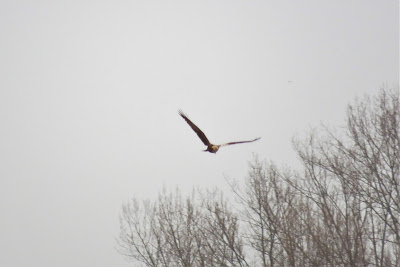 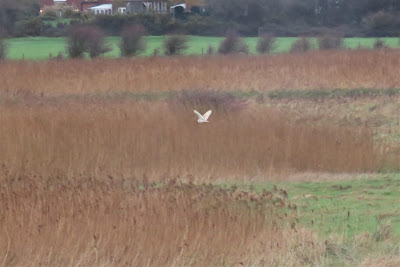 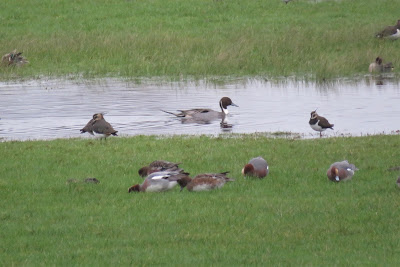 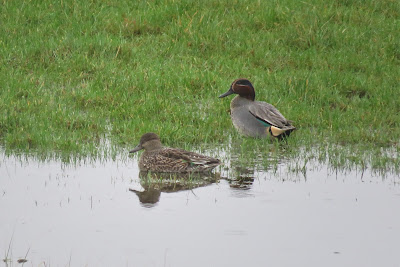 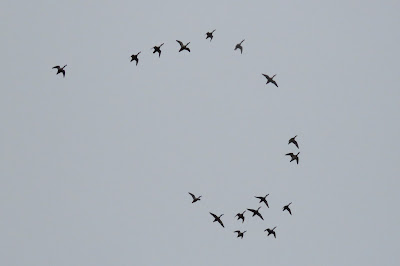 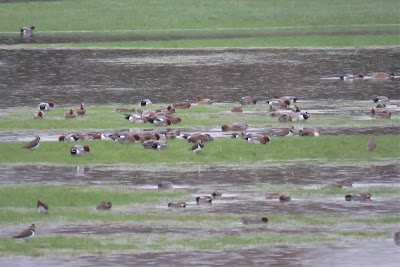 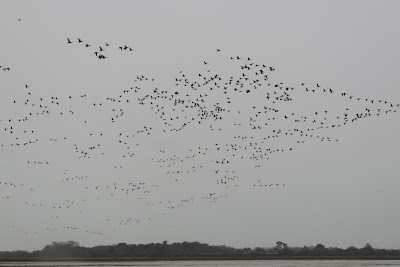 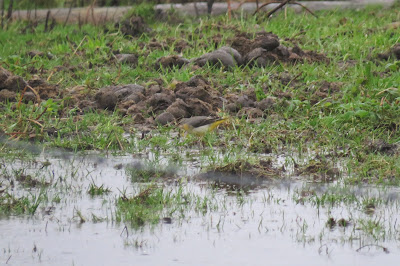 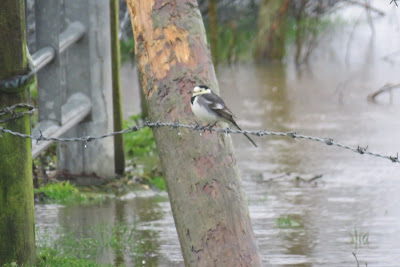 Ferry Pool: There were eight Shelducks, c40 Shoveler, c100 Teal and c150 Wigeon spread around the pool and field, along with a soggy looking Buzzard, whilst two Chiffchaffs and a Goldcrest were in the adjacent hedges. (AH) 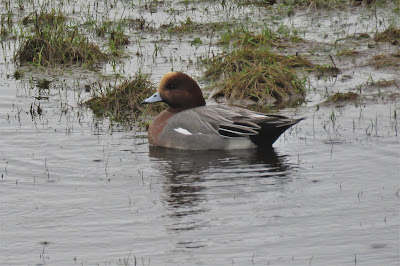 Wigeon (above), Teal, Buzzard & Chiffchaff around the Ferry (AH) 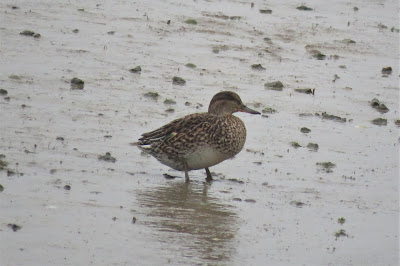 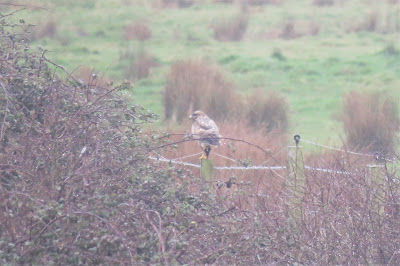 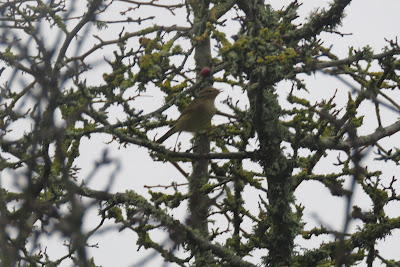 North Wall: Apart from horizontal rain, the only points of note this morning were a Raven perched in a tree, a Jay, 70 Curlew in Honer field 3 and a steady progression of Brent Geese from the harbour to the Marsh/Honer Farms area. (IH)


Highleigh: This morning, a flock of c80 Fielfdfares flew over the road in Highleih, heading towards Medmerry. (AH)

Church Norton: The regular Whimbrel was out on the mud, along with 100+ Knot and lots of Dunlin and Grey Plovers, plus a few Wigeon and Teal, whilst at least 300 Golden Plovers and Lapwings came up from further down the harbour.
Also, a Green Woodpecker was in the churchyard and a Mistle Thrush was in the the car-park. (AH) 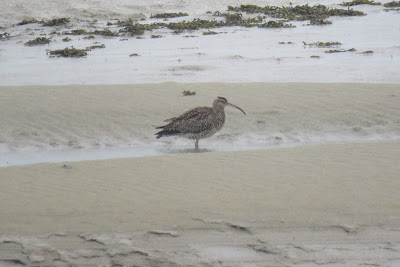 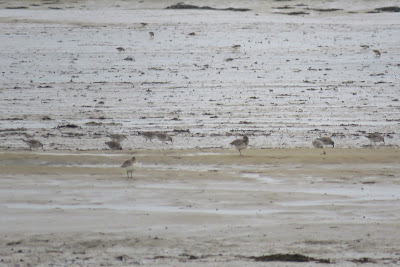 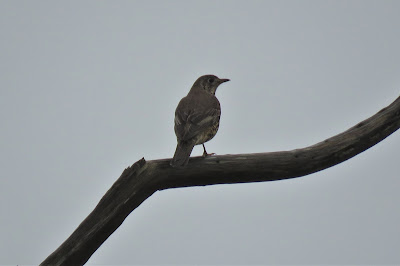 Always a delight to see, a late afternoon encounter with this species in winter is sure to brighten any birding day, especially when it provides such fine photographic opportunities in mid-January and in good daylight! (photo: Chris Bishop)