Tuesday, 28th January: A bright and breezy morning, with a very brisk and decidedly chilly westerly blowing throughout.... 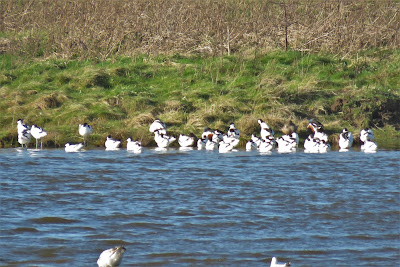 Avocets (above) & Lapwings at the Ferry (AH) 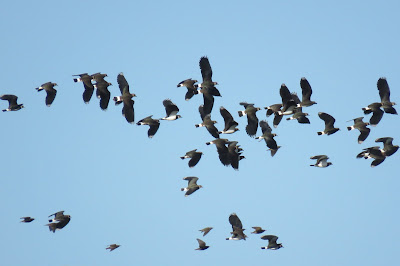 Honer Reservoir: There were ten Tufted Ducks on a very full reservoir, but there wasn't much to be found in the flooded fields beyond a Grey Heron and c30 Shelducks. (AH) 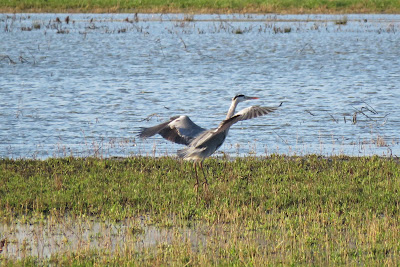 North Wall: The horse paddocks held two Redwings, two Pied Wagtails, a Grey Wagtail, at least three Song Thrushes and a few Blackbirds, but there were few other passerines about.
There was a huge gathering of Brent Geese - at least 2500 birds - that visited all the fields behind the wall and the harbour, in the company of 100+ Curlews and Black-tailed Godwits and at least 50 Teal and 500 Wigeon.
Besides the aforementioned species, the harbour held at least 1000 Lapwing, plenty of Knot, Dunlin and Grey Plovers and 30+ Shelduck. (IH/AH) 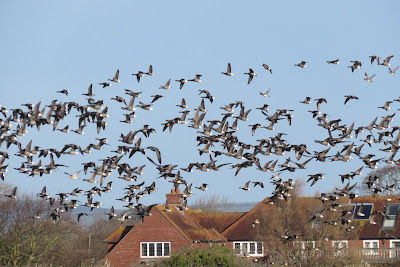 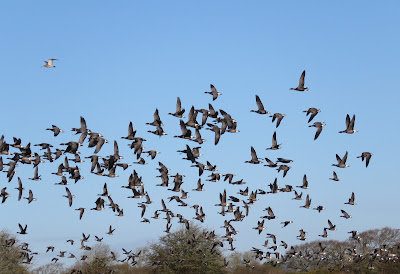 Brent Geese (above), Brent Geese and Curlews, Curlews & Wigeon and Teal at the North Wall (AH) 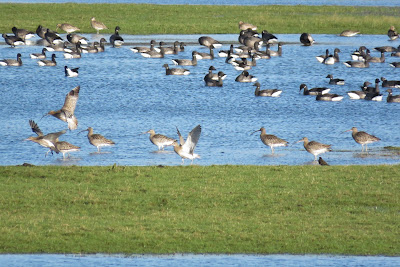 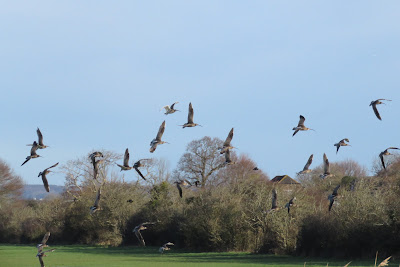 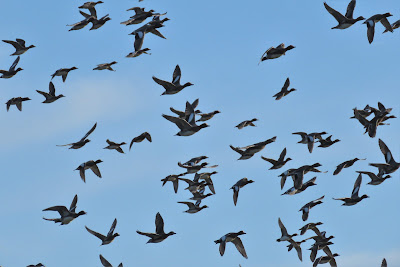 Chi Marina: There was nothing on the windswept pool and reedbed this morning. In the channel were 15 Red-breasted Mergansers, a handful of Brent Geese and a dozen Common Gulls, plus a few Great Crested and Little Grebes, though viewing conditions were difficult in the penetrating wind. Further along the channel, looking towards Dell Quay from Salterns Copse, at least four Goldeneye and several Red-breasted Mergansers and Great Crested Grebes were present but there was little else on offer. (OM)

Birdham Pool: The footpaths were well flooded and the water level in the pool was high, with quite a number of wildfowl semi-obscured amongst overhanging (and partly submerged) tree roots and vegetation. As a result there was no sign of the Mandarin, but at least 60 Teal and 15 Little Grebes were present with a few Tufted and Mallards, whilst a dozen Cormorants were roosting. (OM) 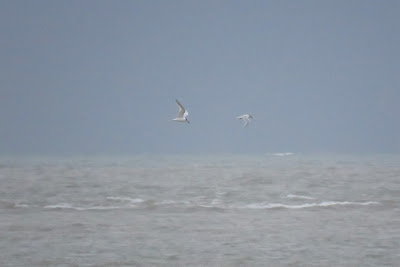 Sandwich Terns (above) & Mediterranean Gull at the Bill (AH) 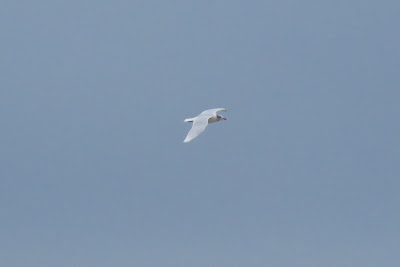 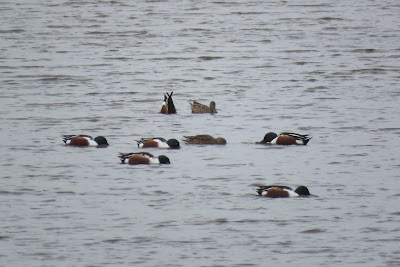 Church Norton: Four Red-breasted Mergansers flew west offshore, with another two flying east out of the harbour this morning, whilst at least 100 Knot were among the many Dunlin and Grey Plovers out on the mud.
Three Snipe were on the creek by the horse field, but otherwise it was quiet, with three Mistle Thrushes and a Buzzard at Greenlease Farm the only other species of note. (AH/IP) 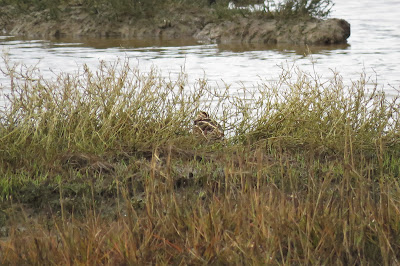 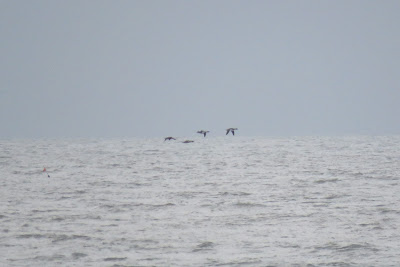 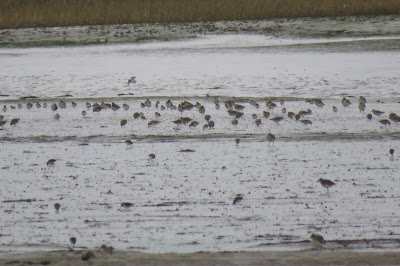 Sunday, 26th January: It remained grey and murky, but a shift to a freshening south-westerly presaged a return to wet and windy conditions by the afternoon.... 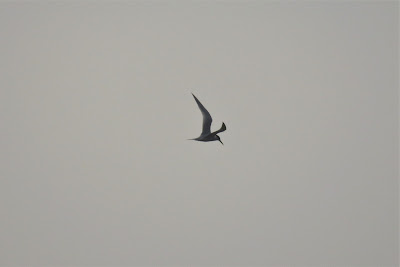 Sandwich Tern at the Bill (AH)

Ferry Pool: A couple of Snipe were down by the road, whilst about 50 Shoveler, 200 Wigeon and Teal and a few were on the water, all disturbed by a man walking along the far bank. (AH)
Later a Merlin was at the back of the pool. (RJS/A&YF) 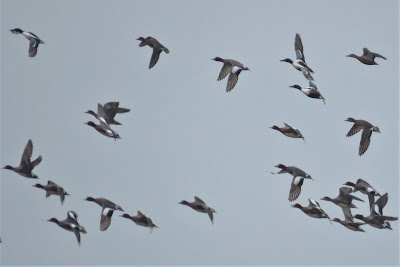 Shoveler and Wigeon (above) & Teal at the Ferry (AH) 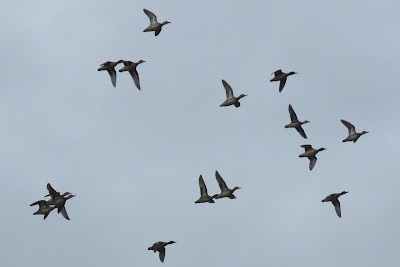 Park Farm, Selsey: A Stonechat and 20+ Meadow Pipits were around the fields, whilst a Peregrine and nine Brent Geese went over and five Tufted Ducks were on the reservoir. (S&SaH)

Church Norton: Two Ravens and a Buzzard were over the Priory and two Peregrines were out hunting over the harbour this morning. (S&SaH)

Fishbourne Creek: The Long-tailed Duck wasn't about this morning, but there were six Goldeneye present and a Jack Snipe was in their usual area, along with a Sparrowhawk, a Stonechat, at least ten Rock Pipits and a Grey Wagtail.
At least three Greenshank, c60 Curlews and c250 Black-tailed Godwits were among large numbers of Redshank, Dunlin and Grey Plovers on the rising tide, along with 200 Wigeon, at least 500 Brent Geese and up to 300 Common Gulls. (AH/IP) 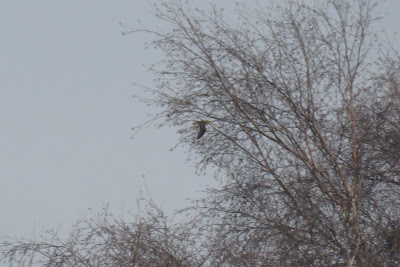 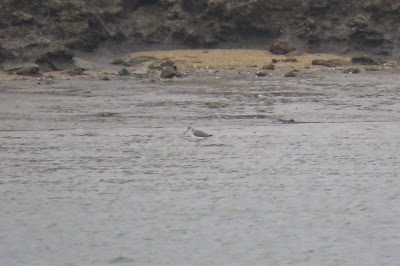 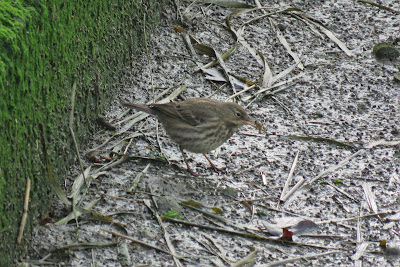 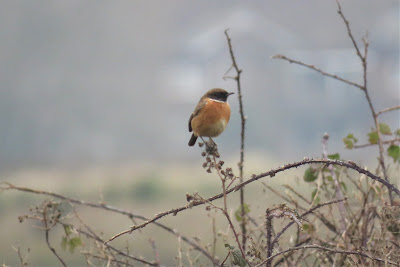 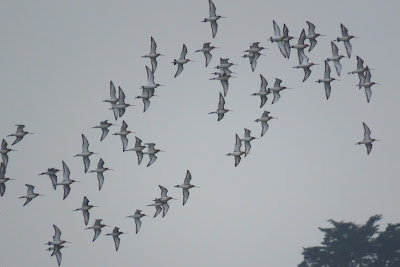 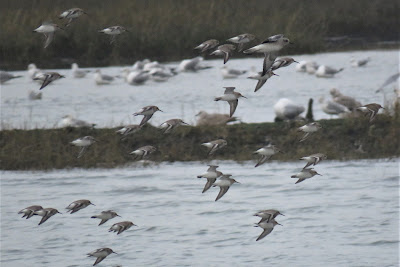 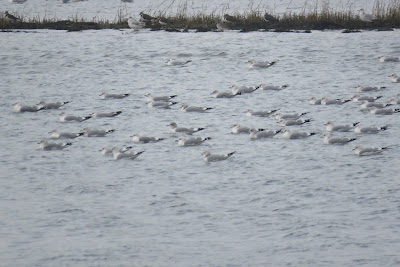 North Wall: There was little activity in either the horse paddocks or along the Wall this morning apart from 50 Curlew in Honer 3 field. However, there were plenty of Lapwing and Golden Plover swirling overhead and Whites Creek was full of Brent Geese, Knot, Dunlin, Black-tailed Godwit, Shelduck, Pintail and Grey Plover as well as, of course, Wigeon and Teal. (IH/SP)