Friday, 9th October: Calm and still to start the day with light winds but with the prospect of a few stronger gusts from the west and showers towards evening....
Selsey Bill: The sea was very quiet this morning but there was some "vismig" including five Woodlarks, which are evidently having a good year at the BIll, and a few Wagtails and Pipits. (RP/BI)
(0710-0830hrs) (WNW F2)
Gannet - 45os
Brent Goose - 1W
Turnstone - 4W
House Martin - 1W
Swallow - 108W
Woodlark - 5W
Meadow Pipit - 29W
Grey Wagtail - 5W
Pied/alba Wagtail - 24W
Stonechat - 1
Chiffchaff - 2
Goldcrest - 1
Lesser Redpoll - 5N 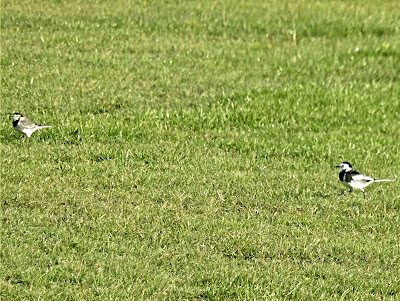 White & Pied Wagtails at the Bill (RP)
Church Norton: There was no sign of the Common Nighthawk this morning despite plenty of birders looking but there were a few other birds of interest.
A Grey Phalarope was found in the central channel at 8am by two visiting birders but hadn't been refound by 11am and a Common Sandpiper was nearby. The harbour also held a Sanderling, a Greenshank and four Bar-tailed Godwits.
Two Crossbills, including a striking male bird, flew over as did two Merlins, a Sparrowhawk was over the trees and a small flock of Lesser Redpolls passed through. The bushes were largely quiet bar a few Chiffchaffs, Blackcaps, Reed Buntings and Stonechats but a Kingfisher was at the horsefield, where a Tree Pipit flew over, and a Dartford Warbler was in the gorse.
In the churchyard were four Siskins and four Great Spotted Woodpeckers. Earlier, just before dawn, three Tawny Owls were heard to call as were two Water Rails. Later in the day a Short-eared Owl was around the Severals and a Rock Pipit was noted near the spit. (BI/BFF/AW/ESt/NBd/SR et al) 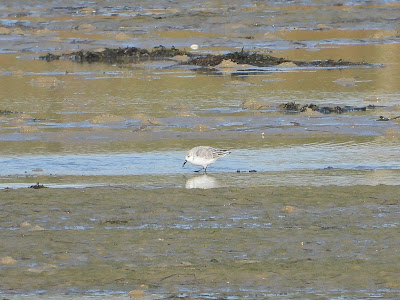 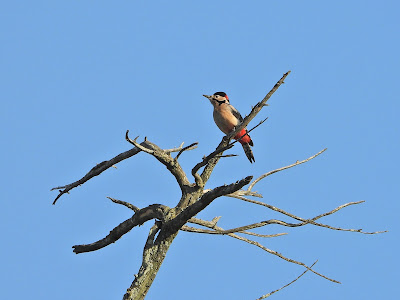 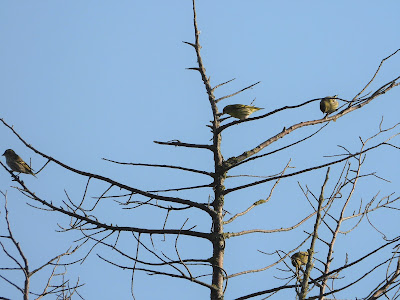 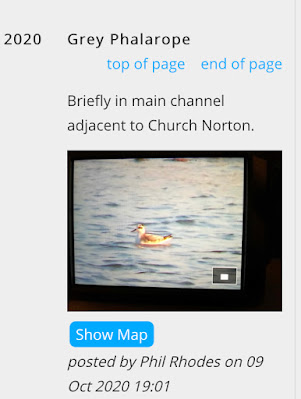 North Wall: A ringtail Hen Harrier made a brie appearance at Owl Point early this morning while along the Wall there were at least six Stonechats, a Wheatear, a Kingfisher and eight Cattle Egrets flying at Owl Copse.
Nine Pied Wagtails were feeding in the horse paddock, two Great Spotted Woodpeckers, a group of Long-tailed Tits and another Stonechat could be found at the approach to North Wall and about 20 House Martins circled above. Whites Creek contained the usual Wigeon, Teal, Black-tailed Godwits, Redshank and Dunlin. (IH/SP/CS et al)
Pagham Lagoon: A Red-throated Diver was present today. (per Birdguides)
Medmerry Trail: Highlights included a Sparrowhawk over Ferry field, a single Cattle Egret with the cows, at least 30 Stonechats along the trail, and plenty of Meadow Pipits, Skylarks, Linnets and Goldfinches.
There was quite a confiding Dartford Warbler in the gorse down the narrow footpath along Ham Farm. Also two Marsh Frogs in a ditch near Ham viewpoint, a clouded yellow and a late Brown Argus. (AM) 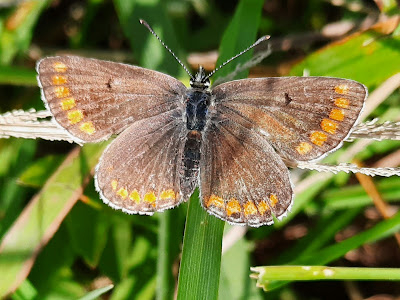 Brown Argus at Medmerry (AM)

Church Norton: An iincredible find by Andy Wilkes this afternoon when a Common Nighthawk was seen coming in off the sea and flying into Priory Wood. Much to relief of the Selsey regulars the bird showed again as dusk came and was last seen at 1820hrs heading over Pagham Harbour towards Pagham spit. (AW/SH/SaH/IP/CRJ/BI)
While the observers were watching the Common Nighthawk, a Hen Harrier flew over Tern Island and an Osprey was noted on the far side of the harbour. (SP et al) 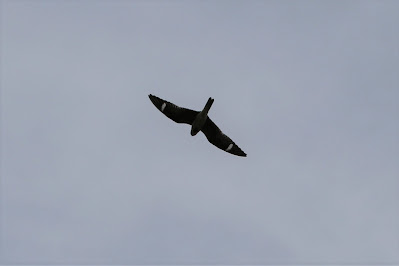 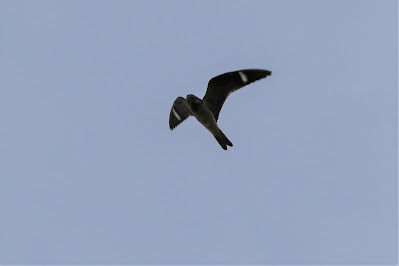 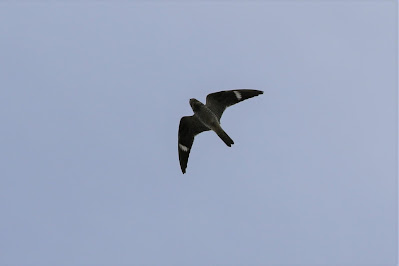 Selsey Bill: It was mild, if windy, this morning with a rain front approaching towards the end of the watch; little visible migration was noted but a few Gannets passed through west. (RP/MO-W/IP/AM)
(0700-0845hrs)  (WSW F7-8)
Gannet -73W
Brent Goose - 14W
Dunlin - 8W
Turnstone - 10W
Mediterranean Gull - 1E
Sandwich Tern - 4W
Swallow - 9W
Chiffchaff - 1
Ferry Pool: A single Avocet was feeding on the pool at midday and there was a Grey Heron at the back, 16 Shoveler, c60 Teal, 22 Wigeon, 20 Lapwing, 8 Shelduck and 5 Canada Geese that flew over toward Medmerry. In the channel opposite were 3 Spotted Redshank, 5 Black-tailed Godwits, 1 Great Crested Grebe, 7 Wigeon, 18 Teal and 2 Swallows flew west.(SR)
Church Norton: A good search this morning failed to relocate yesterday's Yellow-browed Warbler and there were few passerines around the area in the windy & damp conditions bar a dozen Chiffchaffs.
A single Brent Goose was in the harbour along with four Bar-tailed Godwits, 90 Great Black-backed Gulls & 37 Mediterranean Gulls and c.20 Swallows were overhead from the hide to the Severals. (AW/CRJ et al) 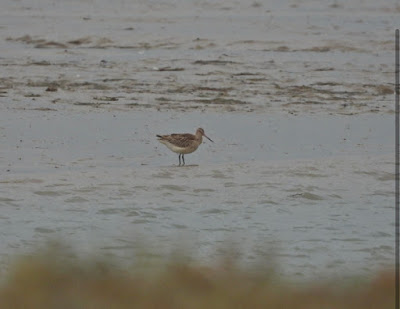 Wednesday, 7th October: Forecast to stay dry for most of the day with the wind veering to the south west this afternoon...

Please note - both AH and OM are away until Monday 12th October - so could all submissions for the blog be sent to Bart on the e-mail address above. Thanks. (Eds 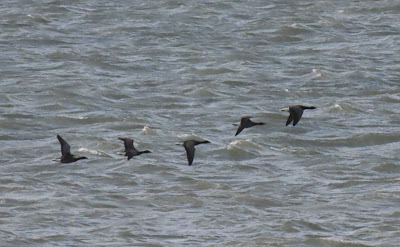 Brent Geese (above) & Pied Wagtail at the Bill (SR) 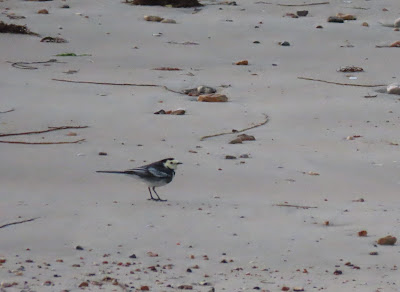 Ferry Pool: Two Avocets on the pool were the highlight this morning and there were also 60 Teal, 10 Wigeon, 25 Shoveler & 20 Lapwing present. (MO-W)
Church Norton: This morning there were two Green Woodpeckers & two Jays in the churchyard, a Stonechat was near the hide and in the hide itself one of the fledgling Swallows was roosting.
There were more Stonechats along the front and spit with 13 seen in total whilst on the old harbour a KIngfisher could be found.on the ironwork. The harbour and creeks contained eight Brent Geese, which soon flew off west, a Greenshank and a Whimbrel (AW)
Along the west side to Church Norton were four Buzzards, a Sparrowhawk, a Kestrel and two Jays; a Spotted Redshank flew over calling and the bushes held 12 Stonechats, 20 Chiffchaffs and a few Blackcaps. There were also some butterflies on the wing including a Clouded Yellow. a Speckled Wood, two Red Admirals, a Peacock and several Small Whites. (CRJ/AM) Later, three Spoonbills came in off the sea heading towards Medmerry (RSPB)
A Yellow-browed Warbler was seen briefly in the churchyard at 1630hrs along with four Goldcrests and c.30 Chiffchaffs. (AW) 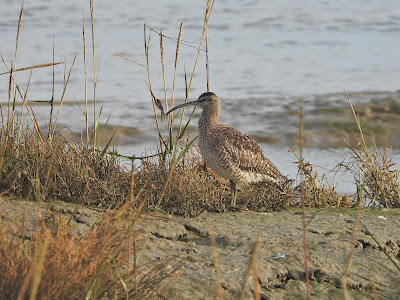 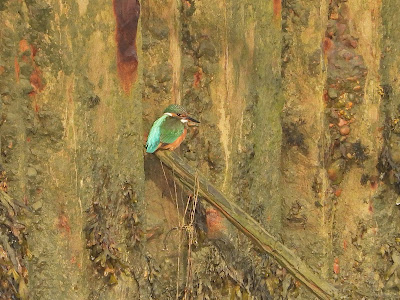 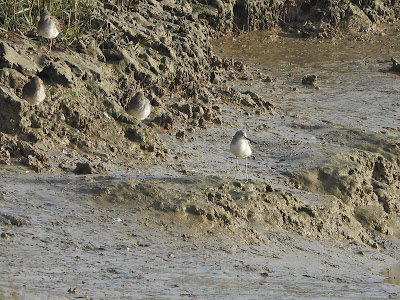 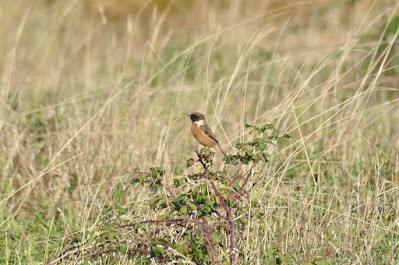 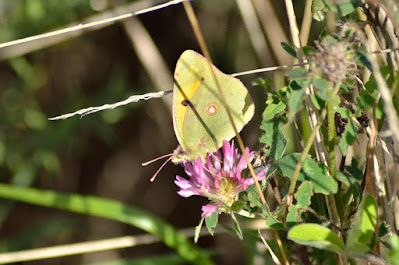 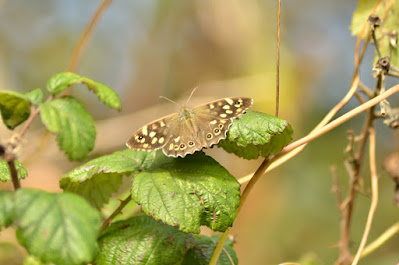 Medmerry: Easton Lane to the Stilt Pool - There were six Cattle Egrets with the cattle near the Stilt Pools this morning. (AM)
Later there were 4 Kestrels, a Buzzard and a Sparrowhawk near Marsh Barn and 14 Stonechats, 8 Chiffchaffs, a Yellowhammer and 40+ Meadow Pipits around the banks. (Sah/SH)
Posted by organicbirder at 08:12