Monday, 27th September: After a very wet and windy start, eventually a bright and very breezy morning as the wind shifted west..... 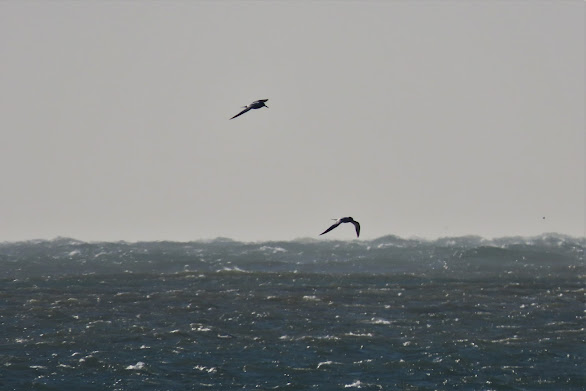 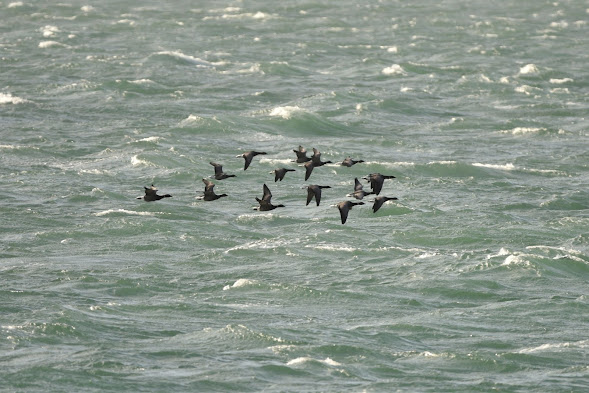 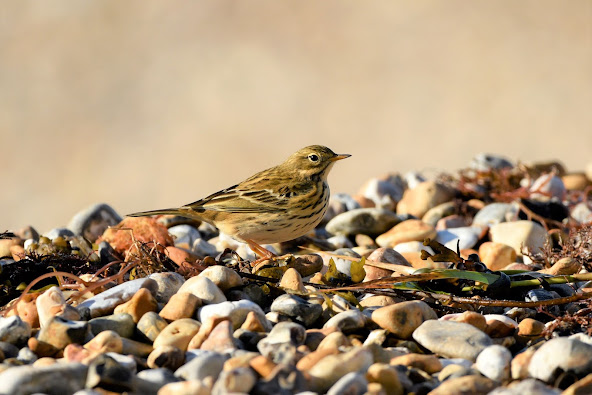 Ferry Pool: A Spotted Redshank flying through the channel opposite was the only bird of note, though five Wigeon and two Shovelers were among the c40 Teal on the pool, which also held four Shelducks, 16 Black-tailed Godwits and c25 Lapwings. (AH) 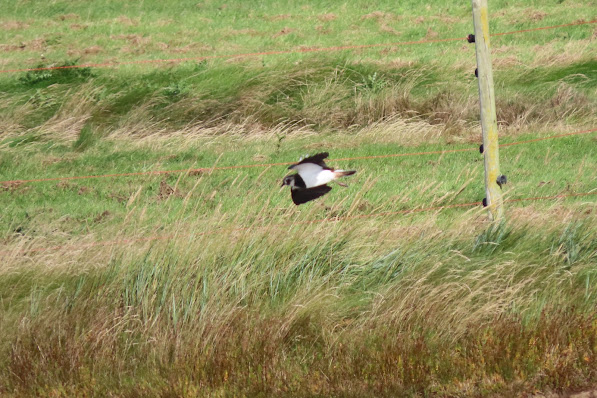 Lapwing (above) & Wigeon and Teal on the Ferry (AH) 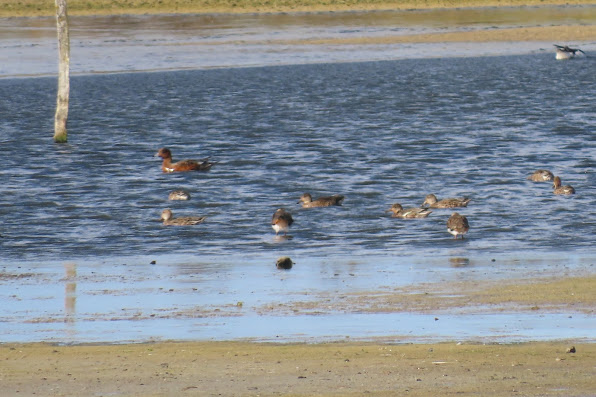 Church Norton: Two Greenshanks, a Bar-tailed Godwit, a dozen Grey Plovers and eight Dunlin were the most notable waders in the harbour, whilst two Sandwich Terns (an adult and a juvenile) and a few Mediterranean Gulls were among the 300+ Black-headed Gulls present.
Half a dozen Chiffchaffs were in the sheltered hedges and similar of Swallows went over, but that was about it. (AH)
This afternoon at 1600hrs, a ringtail (presumably) Hen Harrier was inadvertently flushed from the west side path and flew out south across the saltmarsh. (RBe) 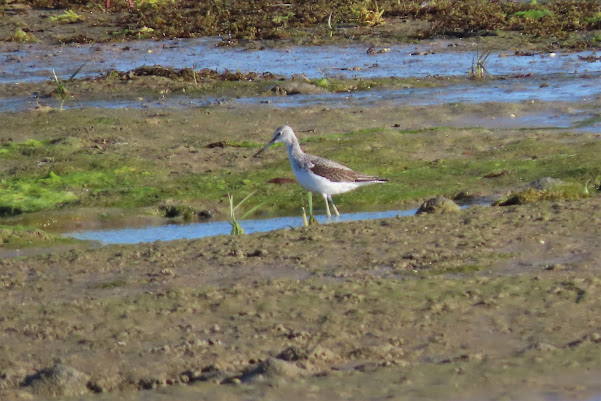 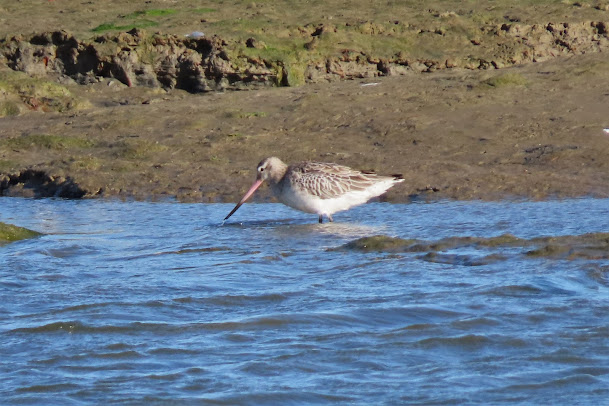 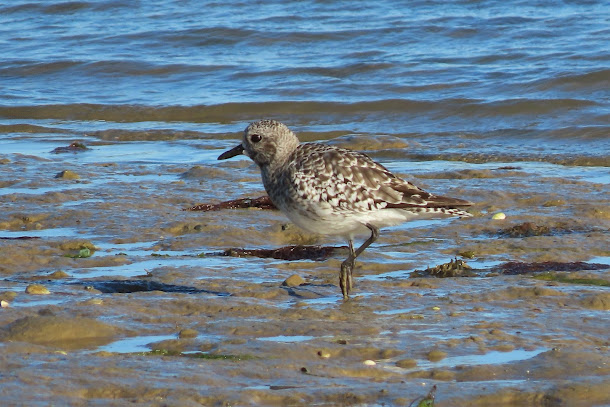 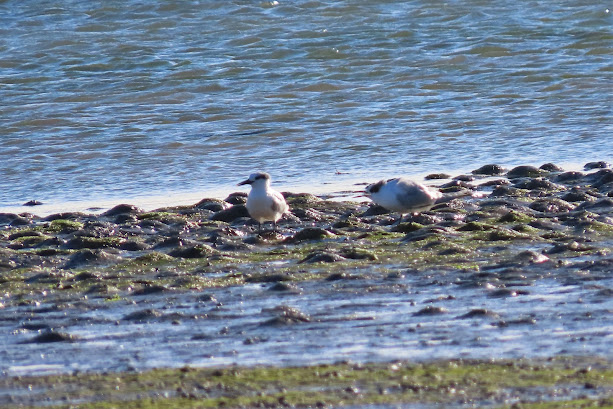 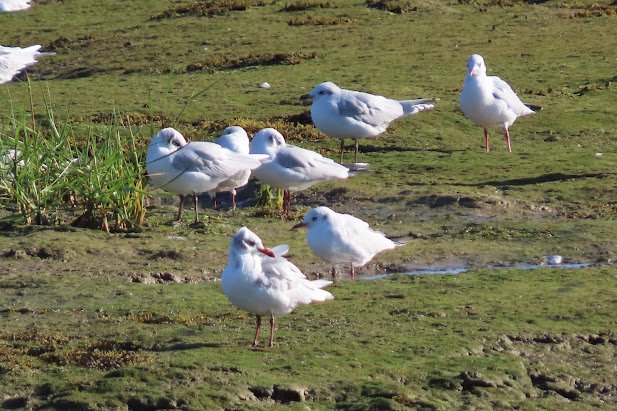 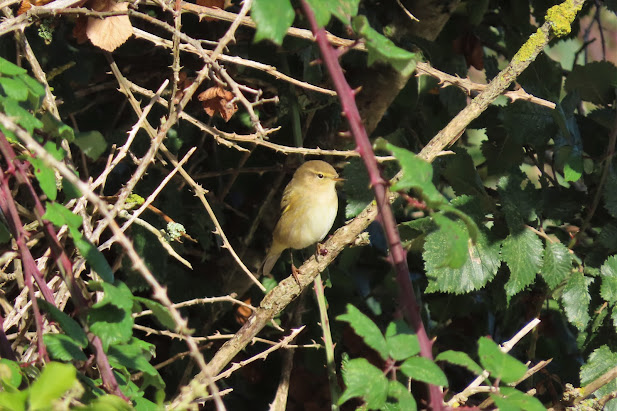 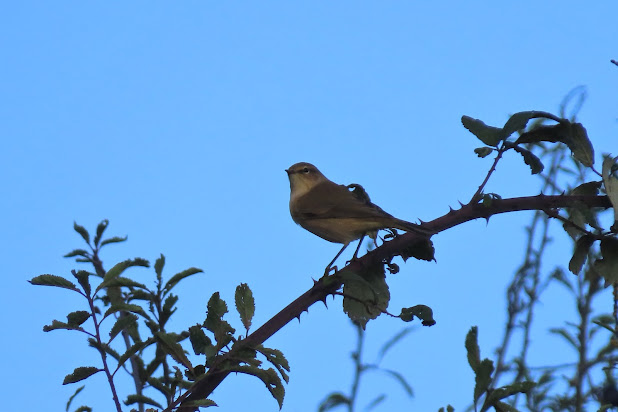 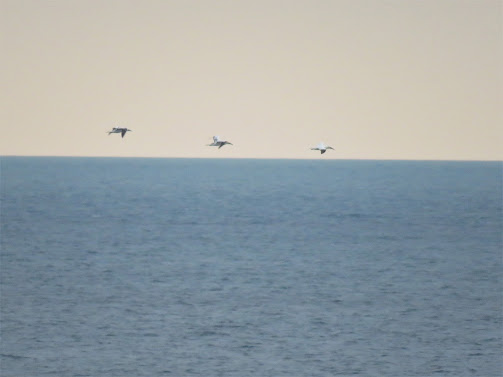 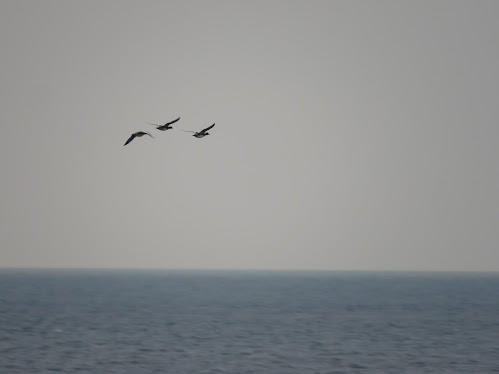 Park Farm, Selsey: A Turtle Dove was on the roof of Park Lane cottages early this afternoon (IP) and later on a Marsh Harrier drifted over. (SH) 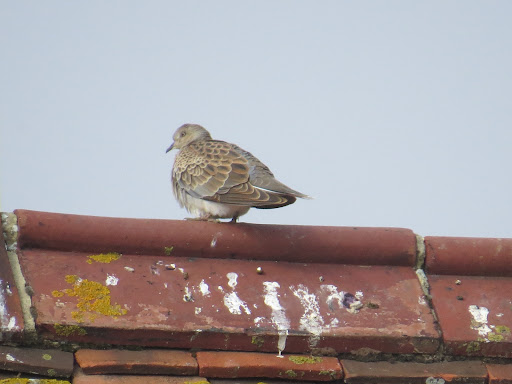 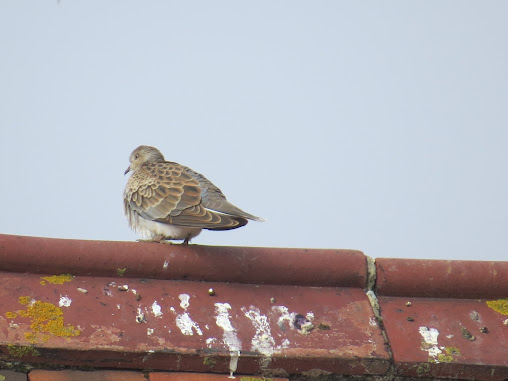 Church Norton: At least 1000 Swallows, with three House Martins among them, were passing through this morning as were c.500 Meadow Pipits, all heading south. Two Sparrowhawks and four Buzzards were also overhead. A Kingfisher was on the metalwork in the harbour and in the vicinity were four Bar-tailed Godwits, a Greenshank and 30 Dunlin whilst a Wheatear was to be found at the end of the spit.
Seven Gadwall went east over the sea before heading back to the second several where there were also five Shoveler. Other sightings included a Spotted Flycatcher behind the hide, two Yellow Wagtails in the horse field and three Sandwich Terns loitering offshore. (IP/HB)
Ferry Pool/Channel: Early on there were four Spotted Redshanks on the main pool but these had moved into the channel area by mid-morning leaving two Snipe, a Dunlin, 109 Lapwing, four Shelduck, a Shoveler, two Teal, six Black-tailed Godwits and a Grey Heron remaining. Also along the channel were 80 Teal, a few Wigeon with a rather pale Shoveler, seven Black-tailed Godwits & five Blackcaps Two Chiffchaffs were in the bushes, two Yellow Wagtails went over and a Buzzard and a Cetti's Warbler were nearby. (SR/BI) 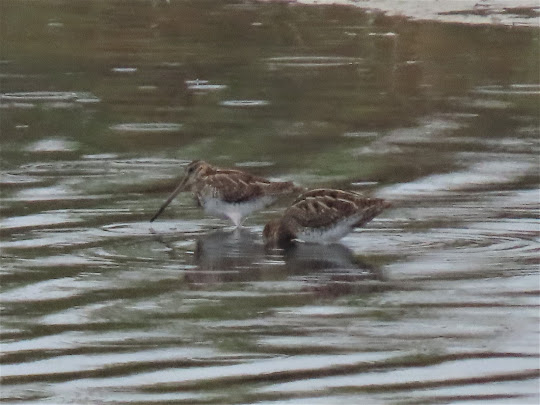 Snipe (above) & Shoveler at the Ferry (SR) 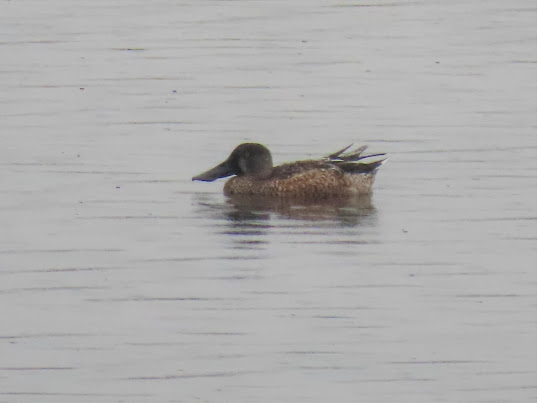 Pagham/Honer: There was no sign of the Purple Heron this morning in the Summer Lane area, with only Grey Herons reported (and note there is a certain amount of disturbance in the general area due to ongoing works).
The reservoir held c.6 Wigeon in with the Coots and Tufted Ducks but bar a few Chiffchaffs in the hedges there was little else of note. (BI et al) The Purple Heron reappeared this afternoon in the same area as yesterday, by the metal footpath gate near the rife. (SaH/SH)
Medmerry: Easton Lane to the Stilt Pools - The two Ravens were again present today as were four Kestrels and 11 Cattle Egrets. Three Yellow Wagtails were about, as was a Pied Wagtail, four Chiffchaffs were in the scrub and c.100 Meadow Pipits, c.50 Goldfinches and c.75 Swallows were overhead and along the banks.
On the Stilt Pools were ten Egyptian Geese and also a Little Stint. (SaH/SH)

Saturday, 25th September: A still, overcast and rather dank morning with some light drizzle at times and virtually no breeze early on, gradually becoming SW1-2 and brightening up by afternoon.

Editorial note: A quick look at the blog today will reveal a distinct lack of photo's amongst the text - largely due to the fact that our 'photographic editor' AH is away for the weekend! This temporary situation will soon return to normal upon his return - but there may well be some further temporary adjustments over the next week or so. The two main editors (OM and AH) are away on a jolly to the Shetlands for a week, so our Deputy Editor Bart Ives will be stepping in to hold the fort during our absence, therefore please ensure any reports are sent to him (see title page).

We are very grateful and fully aware he has to work for a living too, so please be understanding if there are some difficulties during our absence. And you can be sure there will be an air of trepidation 'up north' whilst we're away - but there surely couldn't be another Nighthawk-type mega this year, could there??  (Eds) 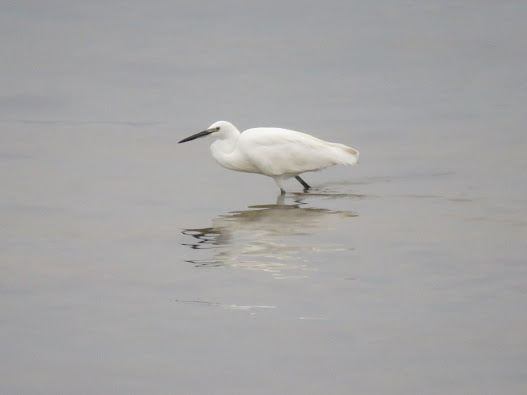 Little Egret (BI) (above) & Guillemot (AW) at the Bill 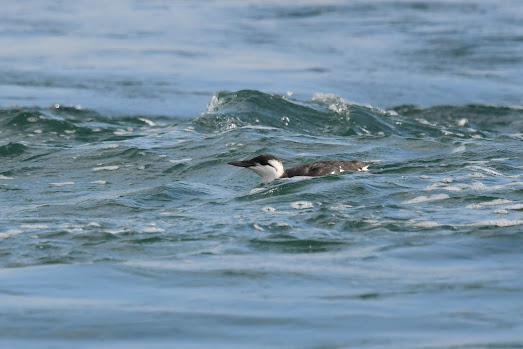 Pagham: Persistence paid off early this morning (0640hrs)  - at least for one observer  - when the juvenile Purple Heron flushed at point blank range from the rife at Summer Lane, c.100yards south of the bridge, the bird flying off in the direction of the sewage works (BI). Late this afternoon the Purple Heron was re-found in the first field alongside the rife and was showing well. (SR/TB et al) 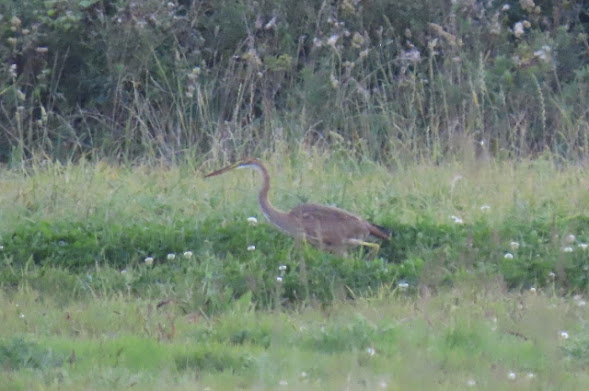 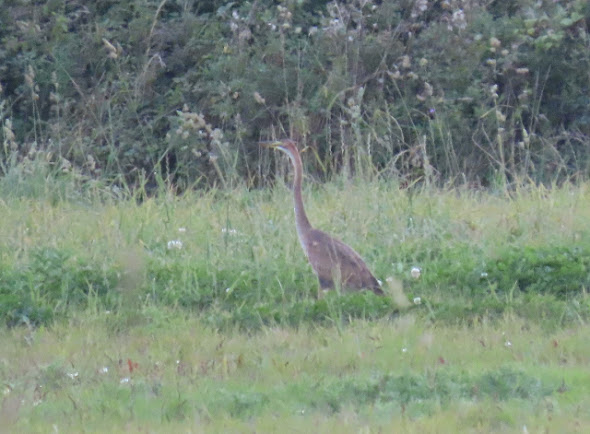 Medmerry: East side to breach - A Spoonbill was present this morning at about 0920hrs as were two Greenshanks and the regular mix of Gulls and c.25 Cormorants.
There were few passerines around the new caravans but a flock of c.30 Linnets was hanging on in the area and there were c.7 Sandwich terns offshore. (BI) 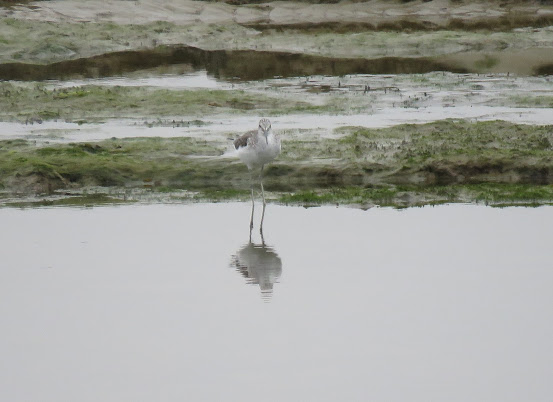 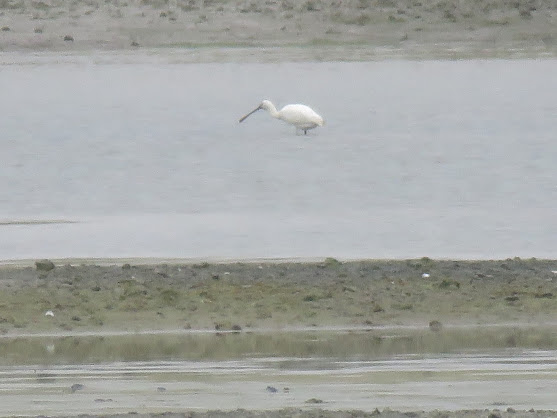 Medmerry: Easton Lane to Stilt pool - The open areas held a variety of species, including three Buzzards, two Sparrowhawks, four Kestrels, 11 Cattle Egrets, a Snipe and 49 Swallows, whilst along the banks were a Wheatear, ten yellow Wagtails, 11 Stonechats, 100+ Meadow Pipits and 200+ Goldfinches.
On the Stilt pool were a Little Stint, a Ringed Plover, two Snipe, an Avocet and 11 Egyptian Geese. (S&SaH/AW) 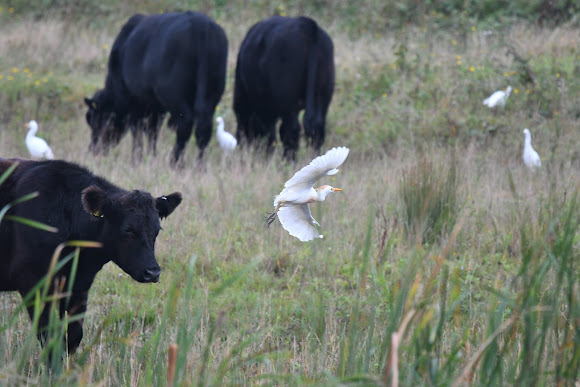 Cattle Egrets at Medmerry (AW)
Church Norton: Chiffchaffs were fairly numerous this morning, with ten at Greenlease Farm and another ten around the brambles by Norton beach, plus others scattered about.
The harbour had just a small number of waders, which included a Bar-tailed Godwit feeding on the mud near tern island and there was a Kingfisher on the metalwork. Numbers of Teal, Wigeon and Pintail continue to grow in the harbour and the second Several held five Shoveler and nine Gadwall and a Common Gull was on the shingle opposite. There were also six Sandwich Terns offshore. (IP)
Park Farm, Selsey: The fields held a pair of Stonechats and a Kestrel, ten Swallows were overhead and a Reed Bunting was in the rife. (IP)