Thursday, 30th September: Showers early and late with a force five SW wind throughout the day... 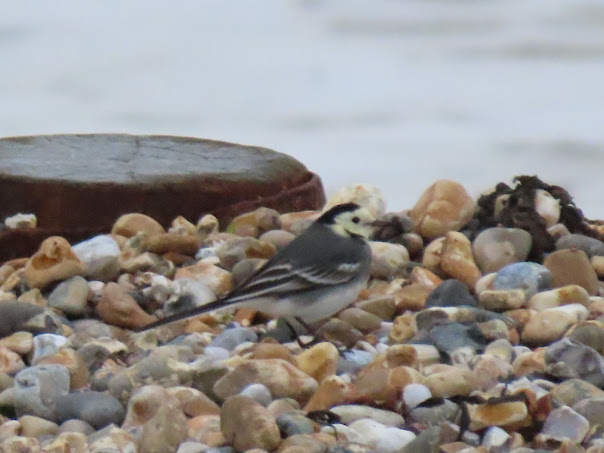 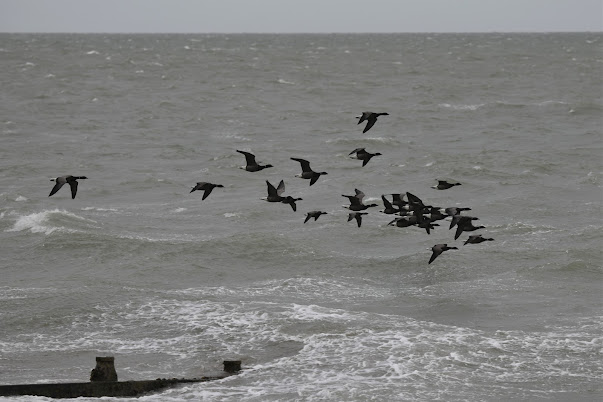 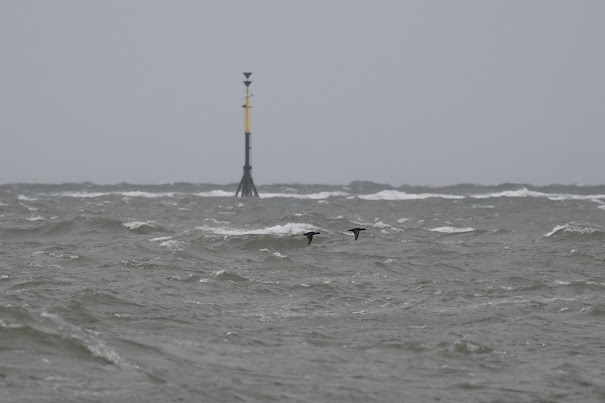 Ferry Pool/Channel: There were 12 Black-tailed Godwits, 45 Lapwing, 28 Teal, three Wigeon, two Shoveler and four Shelduck on the pool whilst a Grey Heron and a Stonechat were out in Ferry Field. Ferry Channel was like a wind-tunnel and all that could be found were c.50 Redshank, c.100 Teal and a lone Curlew. A Devils' Coach Horse beetle was also along the path here. (SR)

Teal and Devil's Coach Horse beetle at the Ferry (SR) 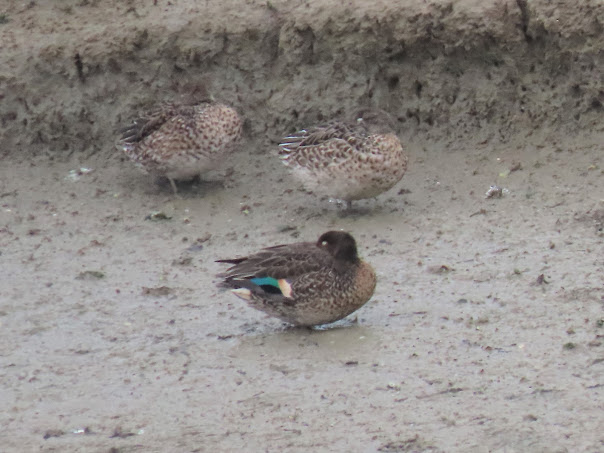 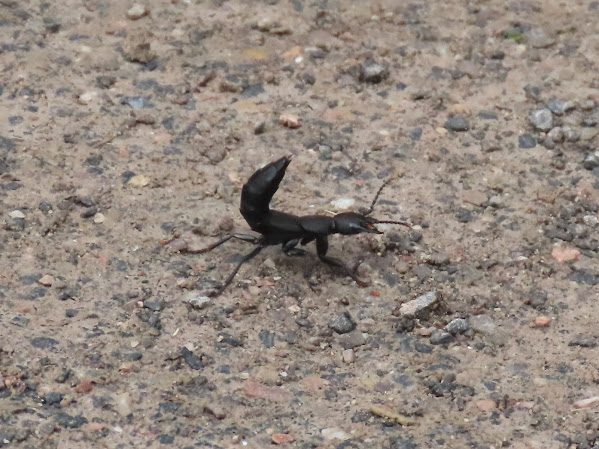 Church Norton: Two Spoonbills were in the harbor this morning, also viewable from the Tramway. Also in the harbour were four Bar-tailed Godwits, a Knot and 48 Mediterranean Gulls. (TB/RJS/CRJ et al)

North Wall: The Breech Pool held 24 Black-tailed Godwits and the short-billed Greenshank was back in White's Creek this afternoon. (AW) 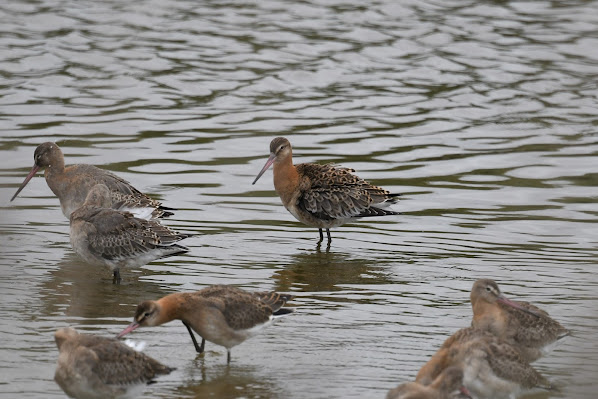 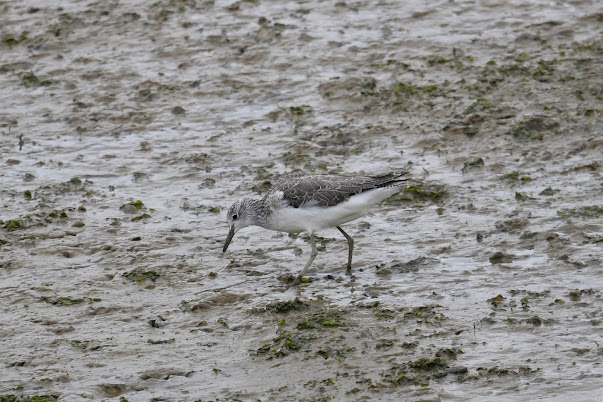 Editorial note: All submissions for the blog to be sent to bart.ives@talk21.com this week please. 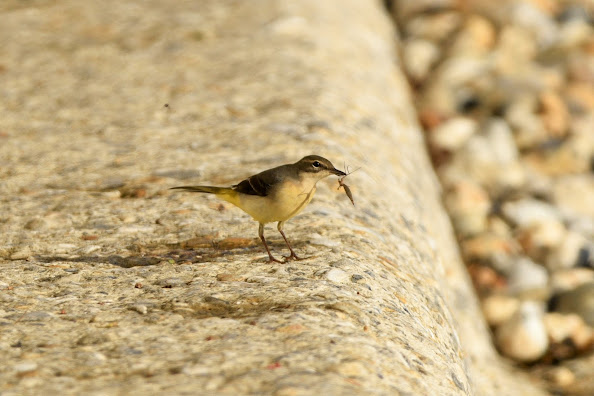 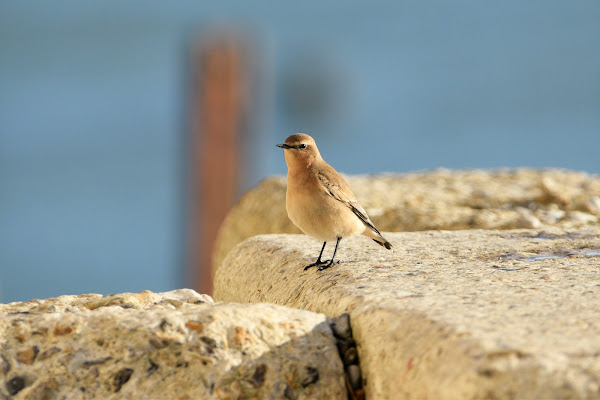 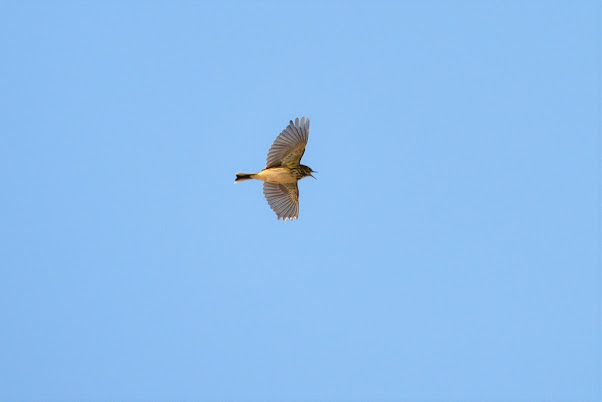 Ferry Pool: There was no immediate sign of the hybrid Harrier this morning and the main pool itself was quiet with just 12 Black-tailed Godwits, 18 Lapwing, two Shelduck, two Egyptian Geese and a handful of Wigeon & Teal present. (BI)
Egyptian Geese on the Ferry (BI) 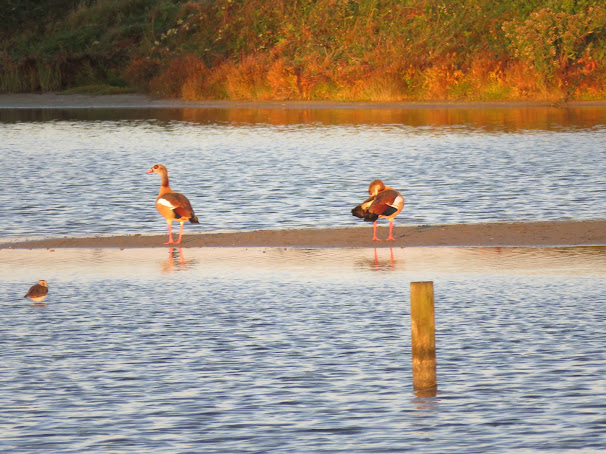 Pagham/Honer: There was no sign of the Purple Heron this morning but there were a few other sightings including a mixed flock of Long-tailed & Great Tits, eight Chiffchaffs feeding with a Dunnock, a hunting Kestrel and one each of Green & Great Spotted Woodpecker. On the reservoir were a few Coots and Tufted Ducks and a Marsh Harrier and Buzzard  flew over west. (GHi) 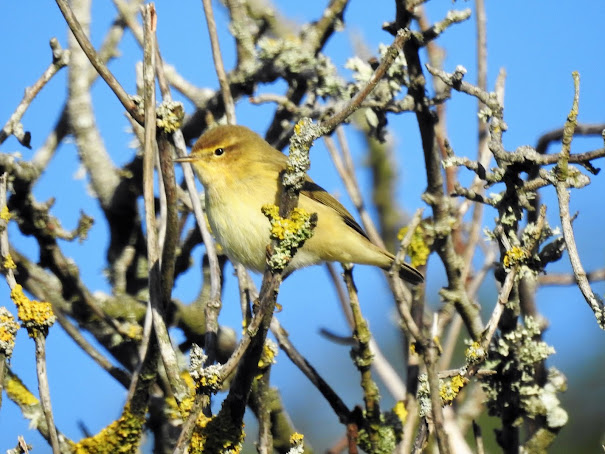 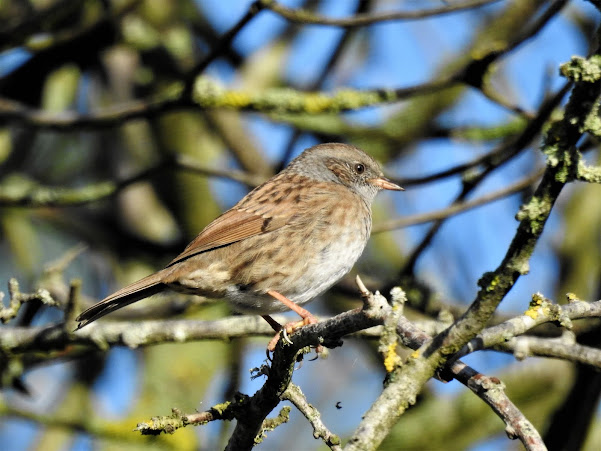 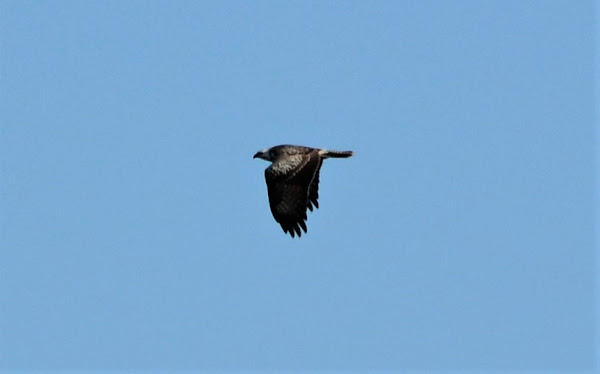 Church Norton:- A short visit this evening on the falling tide, most birds could only distantly be made out having been flushed from the shore by anglers at the benches. The short-billed Greenshank was out on the mud, the first time I've seen it from this side, and there was also 8 Grey Plover, 19 Dunlin, 7 Pintail, 12 Wigeon with 7 Chiffchaffs around the hedges and 6 Red-legged Partridge along Rectory Lane. (SR) 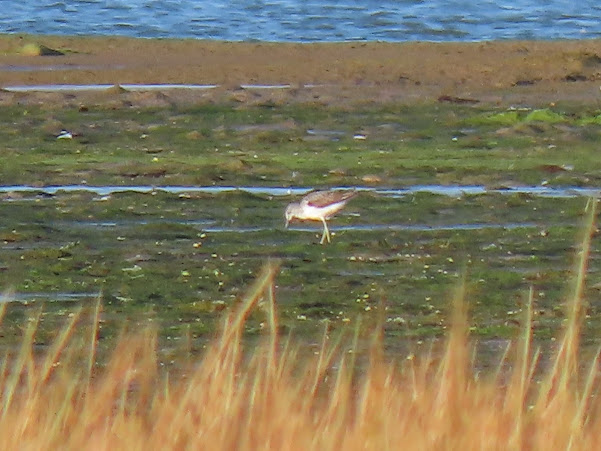 Tuesday, 28th September: Forecast to be dry with light southerly winds but turning out to be F7 SSW with heavy showers...

Editorial note: All submissions for the blog to be sent to bart.ives@talk21.com this week please. 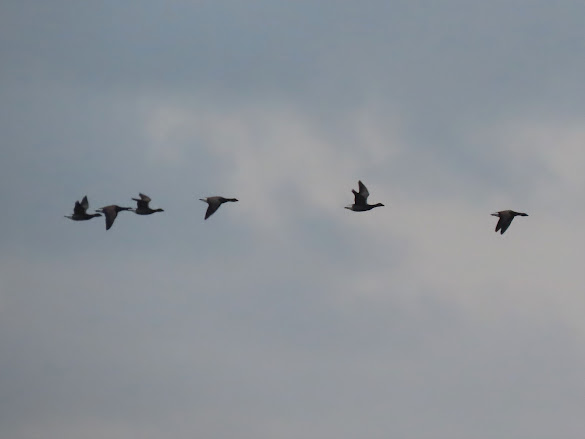 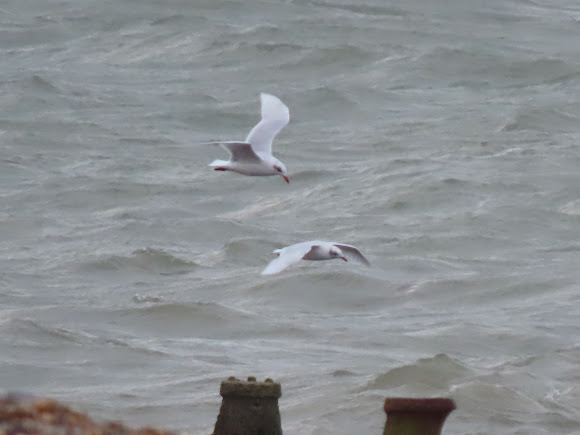 Later on, a short sea-watch produced the first Great Northern Diver of the autumn and three Balearic Shearwaters all going west. (KJ)
(0930-1030hrs)( SSW, F8)
Great Northern Diver - 1W
Balearic Shearwater - 3W
This evening a Manx Shearwater went west and eight Long-tailed Tits, not common at the Bill, were present.
(1645-1800) (SSW, F6) (SH)
Great Crested Grebe - 1W
Gannet - 5W
Manx Shearwater - 1W
Turnstone - 2
Shag - 2W
Mediterranean Gull - 19W
Sandwich Tern - 24W
Long-tailed Tit - 8
Pagham Spit/Lagoon: The highlight here was a ringtail Hen Harrier, presumably yesterday's bird, that was flushed from the spit by a dog-walker and headed rapidly towards the east side. Also along the spit were a number of Meadow Pipits and Linnets as well as a Wheatear. Two Greenshanks, a Little Egret and a Ringed Plover were on the remains of Little Lagoon but the  main lagoon was again quiet with just a Great Crested Grebe, a few Tufted Ducks and Wigeon and a raft of Little Grebes of note. (BI) 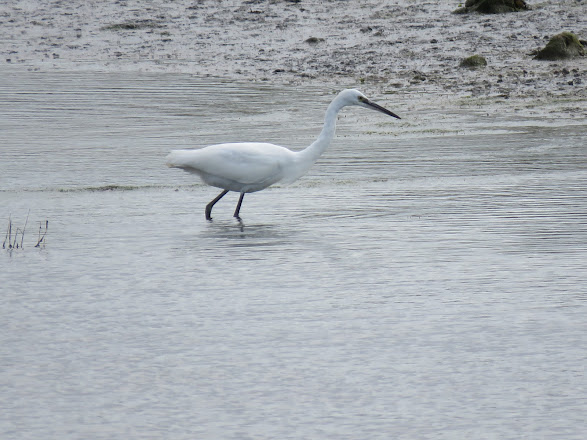 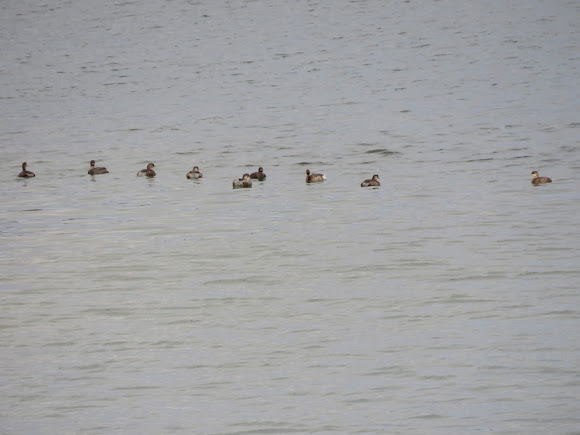 North Wall: A quick look here found a Ruff on the Breech Pool and another Ruff with c.40 Black-tailed Godwits on Honer one field. (BI)
Church Norton: There were 13 Blackcaps and 12 Chiffchaffs in the churchyard and behind the hide whilst 40 Swallows were grounded by the heavy showers on the ploughed fields with 30 Linnets also nearby. (CRJ)
Ferry Pool: The Hen Harrier was present here from 1305hrs, taking occasional excursions towards the solar farm before showing well over the pool and was seen to hunt and catch a Red-legged Partridge at one stage. (KJ/AW/SR et al)
Update! This bird is provoking a great deal of controversy - it appears to show the classic five "fingers" of a Hen Harrier and yet has the pronounced collar of a Pallid Harrier. A hybrid Hen X Pallid such as the one previously in Norfolk has been suggested by a number of sources and that seems (at the moment!) the definitive ID....
Presumed hybrid Hen X Pallid Harrier at the Ferry (AW) 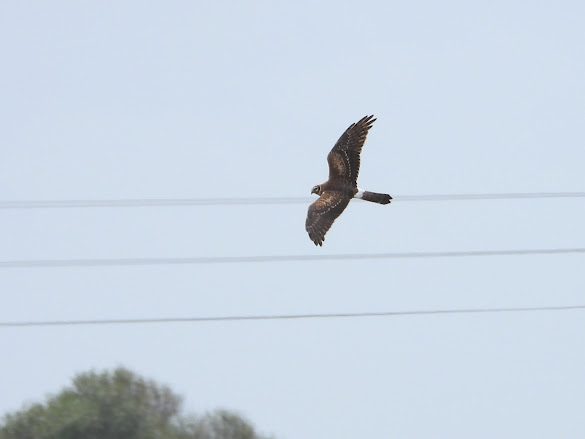 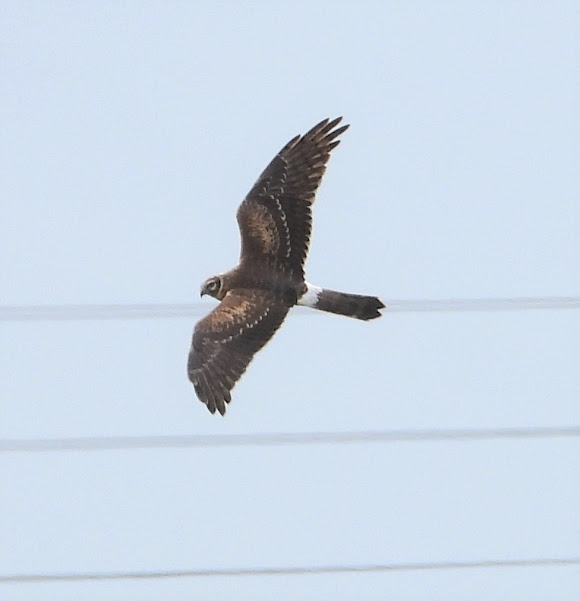 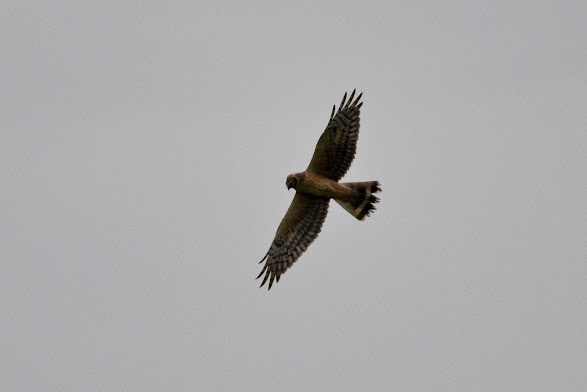