Sunday, 3rd October: F6 easterlies expected but turning out to be westerly F4...dark and gloomy conditions but dry... 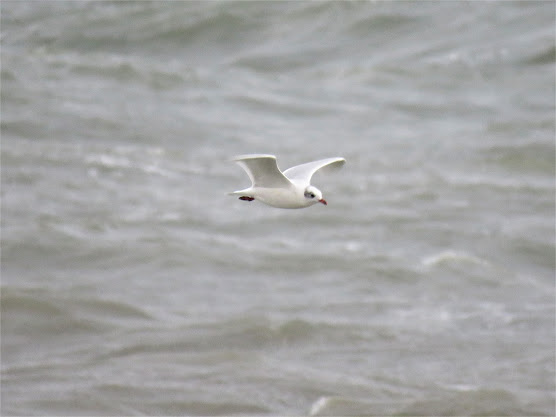 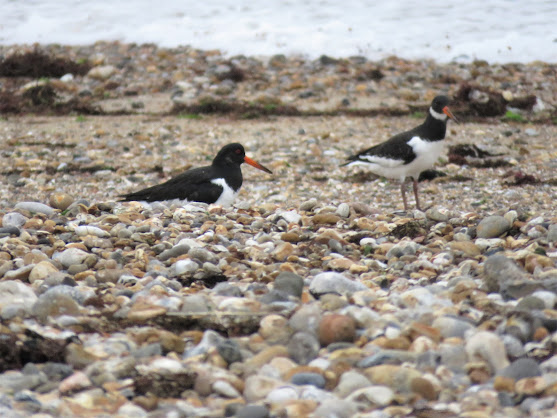 Park Farm: A Wheatear flew over the fields and a Kestrel, the first three autumn Skylarks and a House Martin were present. (IP)

Pagham Spit/Lagoon: Three Wheatears were in the old car park this morning and along the spit were at least ten Reed Buntings, a fairly late Whitethroat, a flock of Linnets and plenty of Meadow Pipits. There wasn't much to see in the harbour but there were a few Wigeon in the seagrass, a mixed flock of waders and the Peregrine was on its island. The lagoon remains dismal with just a pair of Tufted Ducks of note. (BI) 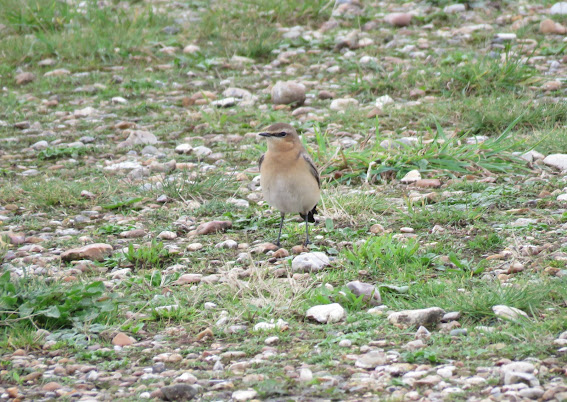 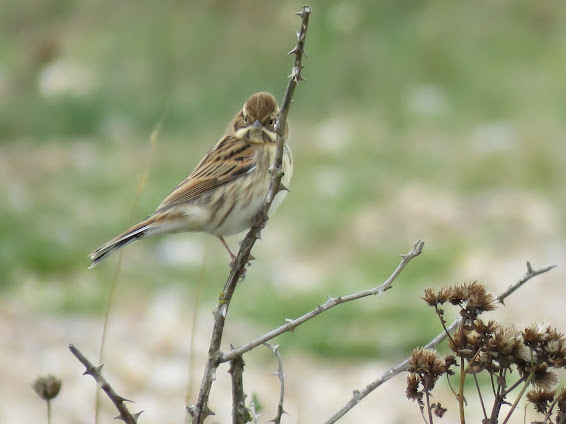 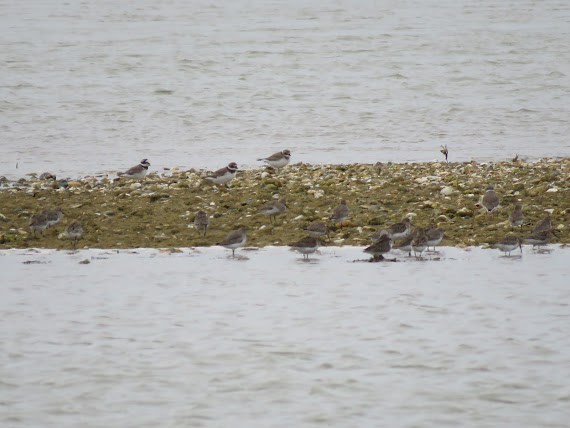 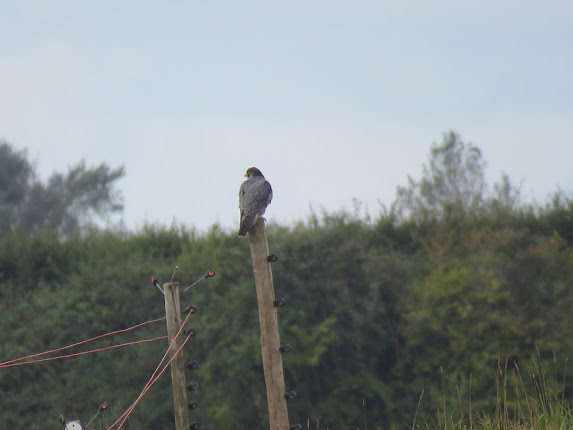 Ferry Pool/Channel: Today the pool held eight Avocets, 75 Lapwing, 21 Black-tailed Godwits, five Shelduck, ten Shoveler and 12 Teal. In Ferry Field was a Wheatear, a Grey Heron, a Little Egret and a Stock Dove whilst a Swallow went over and two Chiffchaffs were in the bushes. In Ferry Channel was a Great Crested Grebe and nearby Red Barn Ditch had a Kingfisher. (SR/GM) 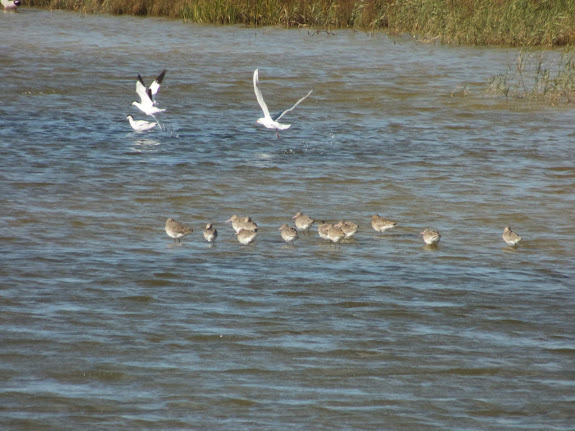 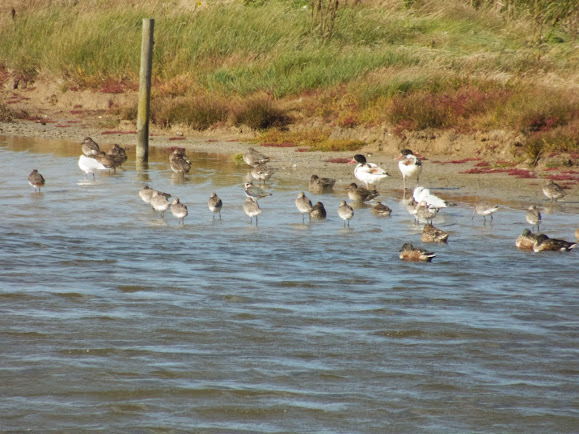 Pagham West Side: This afternoon a Sand Martin and 20 swallows were feeding over the Long Pool and a Chiffchaff, six Stonechats and Reed Bunting were in the blackthorn. A Buzzard also went over. (S&SaH)

Medmerry: Easton Lane to the Stilt Pools - The two ravens were still in the area today joined overhead by four Kestrels and two Buzzards. Nine Cattle Egrets were around the cows and the banks held eight Stonechats, ten Yellowhammers & a Reed Bunting. Circa 300 Meadow Pipits were also present as were 30 Goldfinches, 10 Skylarks, a Pied and two Yellow Wagtails and 20+ Swallows. Six Chiffchaffs were in the hedges and the Stilt Pools, though quiet, still held 13 Egyptian Geese. (SaH/SH)

Church Norton: A very full harbour found three Bar-tailed Godwits roosting with 30 Grey Plovers, a few Dunlin & Ringed Plover and eight sandwich Terns sat on the metalwork. Towards North Wall c.30 Lapwings were noted.
The second Several held six Shoveler and six Gadwall and a Whitethroat was was i the bushes at the first Several. In front of Bluebell Wood were at least 20 Chiffchaffs and a Blackcap was near Greenlease Farm. A female Stonechat was in the horsefield, a Grey Wagtail flew over the spit and a Mistle Thrush went over heading towards Park Farm. (IP) Two Wheatears were also on the concrete blocks. (P&JW)
I spent an hour in the hide late this afternoon at low tide. Most of the birds were tucked away, sheltering from the atrocious weather but one or two remained. A Greenshank was intent on feeding, running along the channel with its head under the water, there were five Grey Plovers, three Ringed Plover, eight Curlew, a Whimbrel, seven Dunlin, three Great Crested Grebes, a Black-tailed Godwit, eight Wigeon, nine Pintail, three Turnstones and a Swallow. And over Pagham there was a dramatic double rainbow. (SR)
Greenshank & spectacular rainbow at Church Norton (SR) 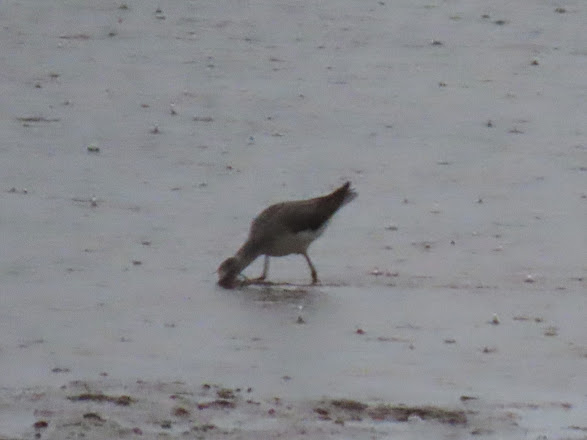 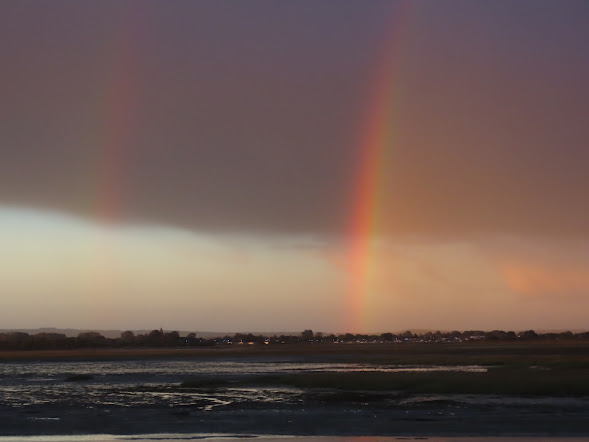 Saturday, 2nd October: Dry to start the day but with heavy rain expected later and the due-south winds picking up to force 8 in the afternoon... 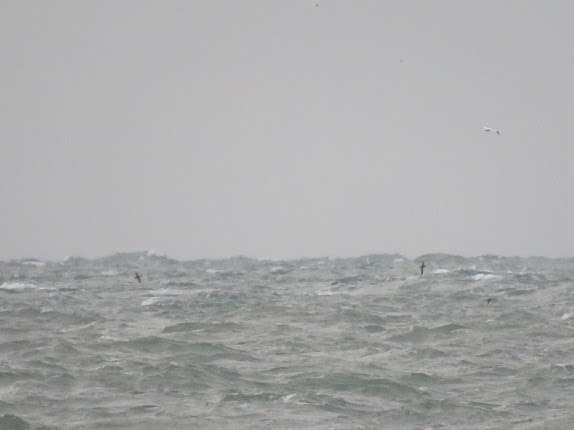 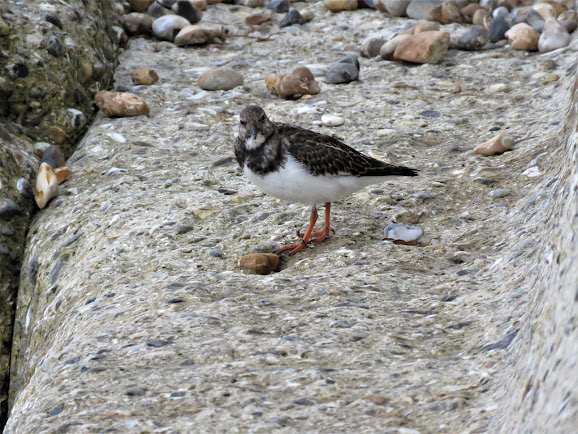 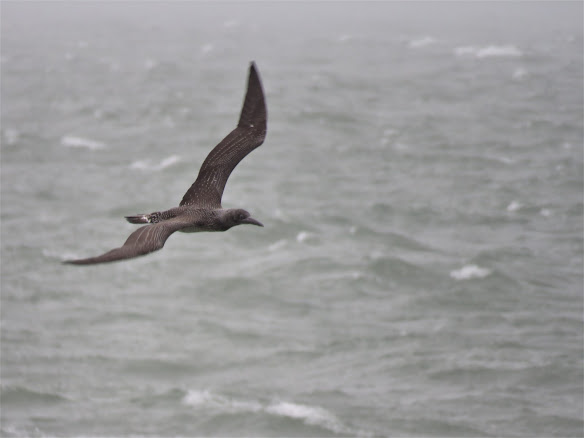 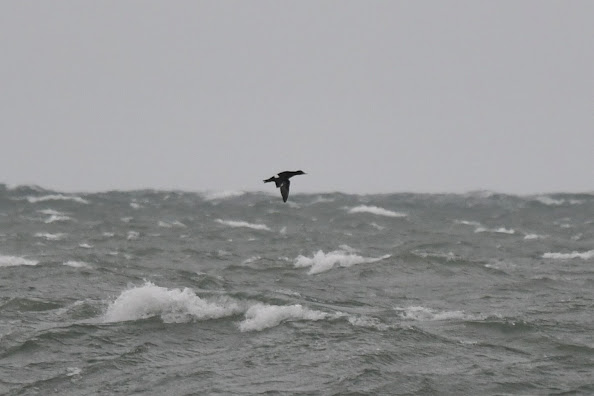 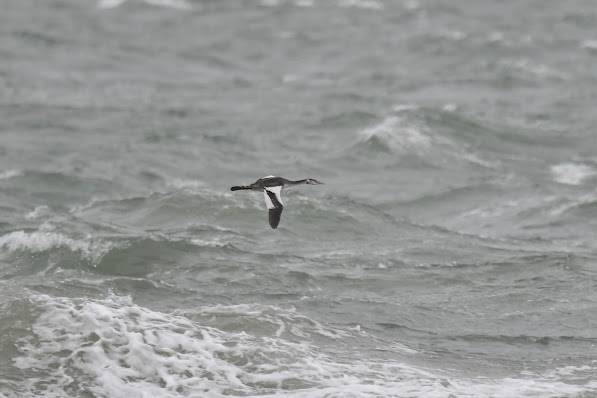 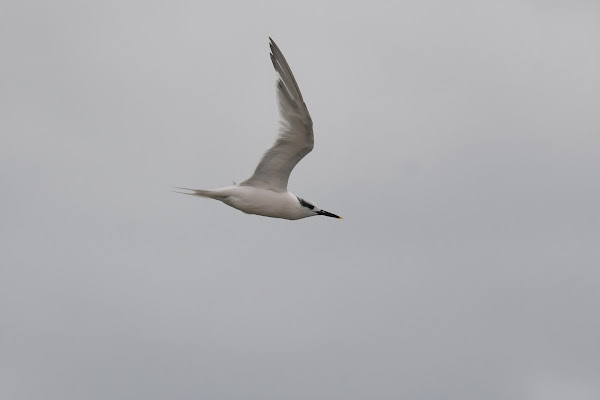 Park Farm, Selsey: There were four Chiffchaffs around the hedges and c.40 Meadow Pipits over. (SH)
Church Norton: Eight Brent Geese flew into the harbour but there was little else to see in poor conditions. (SH)
Medmerry: Easton Lane to the Stilt Pool - A male Merlin was active in the Stilt Pool area early today (around 0730). Other species of interest included a Ringed Plover and a flock of about 50 Stock Dove on the fields west of Marsh Barn.
A female Sparrowhawk was chased by a crow all the way to Earnley. The usual several hundred Canada Geese flew west around the high tide. (RBe)
Ferry Pool: Not much change from yesterday with the two Greenshank and two Avocets still present, the Shoveler number had increased to four and they were joined by eleven Teal and fourteen Lapwing with a Buzzard a Cetti's Warbler and a couple of Chiffchaffs in the hedges. (SR)
Teal at the Ferry (SR) 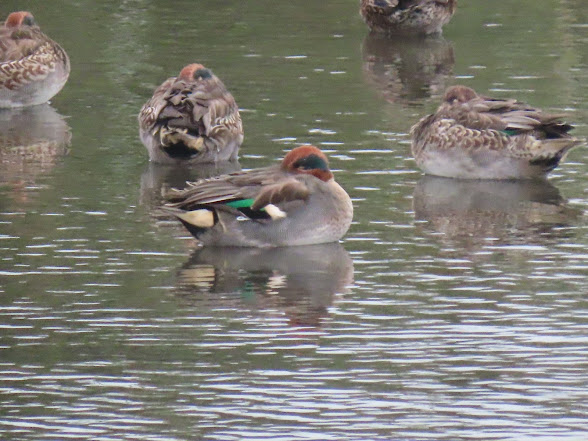 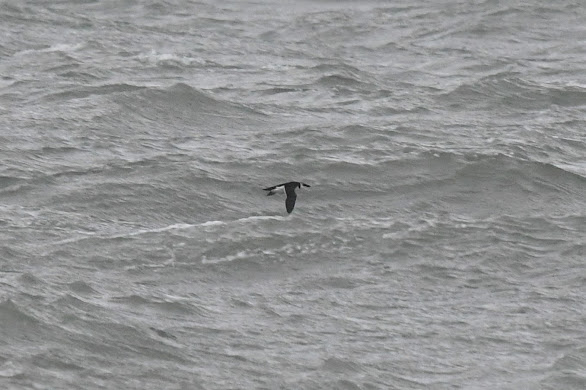 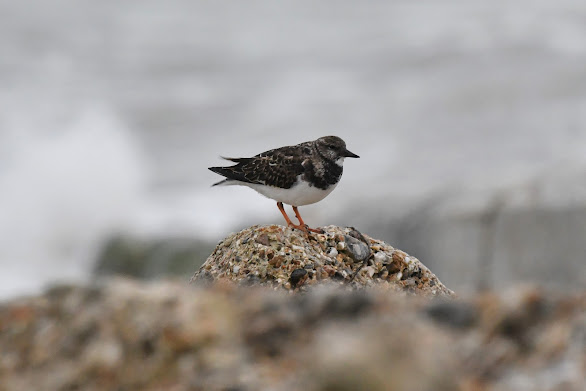 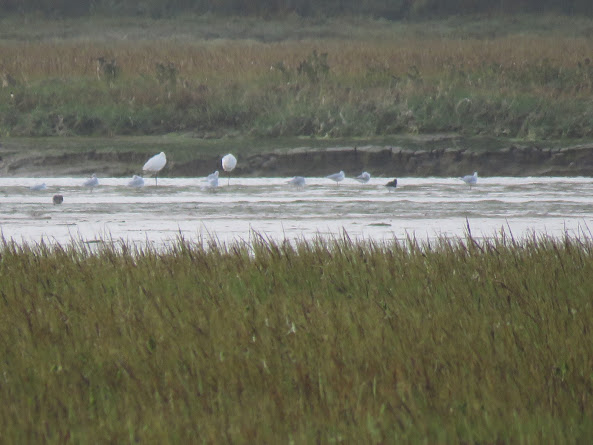 Ivy Lake complex: Unsurprisingly, given the amount of continuing disturbance here, there were no ducks on any of the lakes this morning (bar two Gadwall on Deep Lake).just plenty of Coots. Hopefully the wildfowl will return over the winter...Along the paths were just a single Cetti's Warbler, a Green Woodpecker and four Chiffchaffs. (BI)
Green Woodpecker at the lakes (BI) 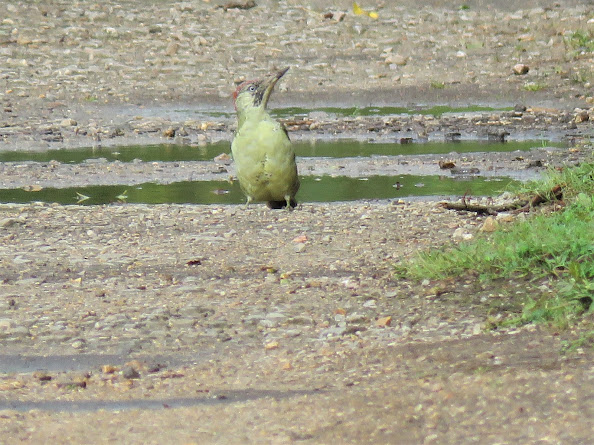 Ferry Pool: Two Greenshank and two Avocets were asleep at the back of the pool, and there was also a Little Egret and a Grey Heron, 30 Teal, 45 Lapwing, two Shelduck, a calling Chiffchaff and Cetti's Warbler, with a Snipe in the field along with two Stonechats.
Also another observer reported a Wheatear in the field earlier. It was high tide in Ferry Channel so little could be seen other than a handful of Teal and a Curlew and for a few moments there was a Grey Wagtail by the sluice. A Kingfisher was also near the Discovery Area.
Later, a walk encompassing the Ferry/Tramway/Yeoman's Field & the sewage farm found a Green and a Great Spotted Woodpecker, three Jays, five Swallows and two Mediterranean Gulls. Around the newly named "Harrier Field" were a Clouded Yellow and four Roe Deer. (SR/MAp/CRJ)
Avocets and Kingfisher at the Ferry (SR/MAp) 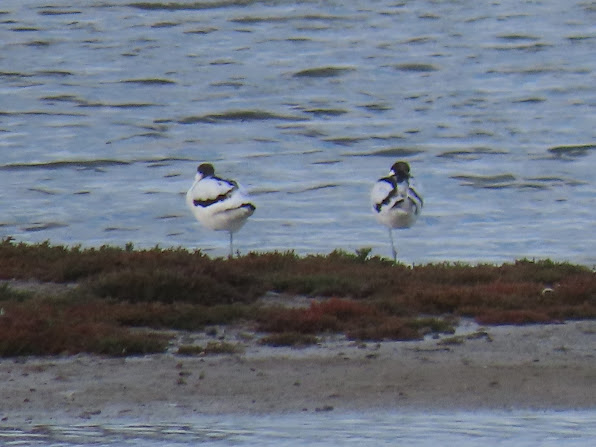 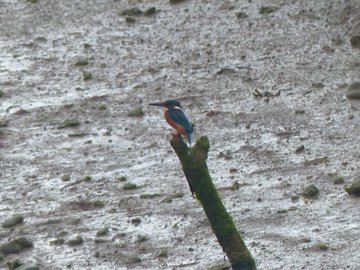 Birdham Pool: There seemed to be a Little Grebe convention on the pool today, I counted 45 in all but there wasn't much else apart from a pair of Gadwall, a Grey Wagtail overhead, a Jay and a Buzzard plus assorted Coots and Mallards. No Tufted Ducks which is unusual. (SR)
Little Grebes at Birdham Pool (SR) 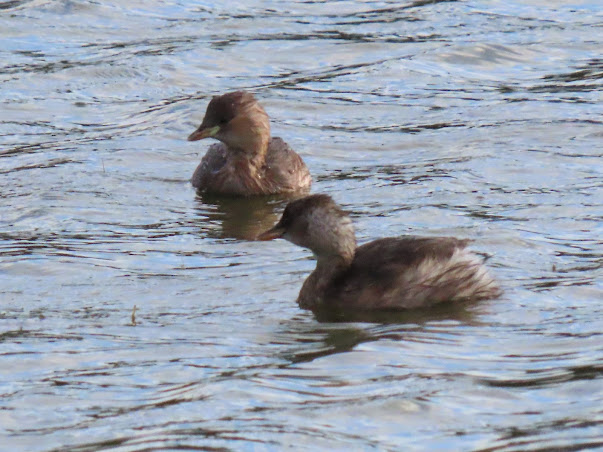