Wednesday, 22nd May: A rather calm and overcast morning with just a light northerly turned out to be fairly productive, producing 4 Pomarine and several Arctic Skuas, plus a bit of a movement of Commic Terns and Common Scoter. Unfortunately I misjudged things again and chose today to stay away from the Bill and do a bit of local birding with some Nightjarring in the evening. It seems most other regulars were also absent and it was left to GH, later assisted by C&ME to hold the fort for most of the day (see log below). Sadly, amongst the day's events was an incoming Spotted Flycatcher that ditched into the sea close to shore. GH mounted a rescue mission and waded in to save it, but the poor bird died soon after in the hand (see pic). 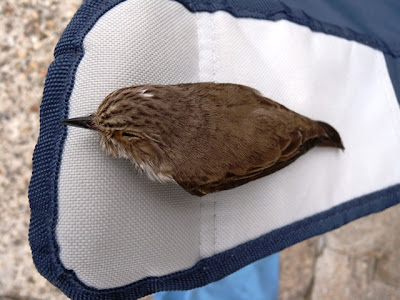 Tuesday, 21st May: Wind still northerly but fairly light, combined with overcast skies and early murkiness over the sea, so I was hopeful of a bit of passerine arrival this morning, but it didn't materialise. Jays however were notable once again; on arrival at 0630hrs a flock of 3 were circling the Bill House tower before heading off NW, followed within the next half hour or so by further flocks of 3,4 and 6 (and possibly another 6) - giving a minimum total of 16. Just  They all seem to be coasting in a generally westerly direction, but just where are they coming from? I tried in vain to photo them passing, but couldn't lock on - this pathetic image of a single bird being the best I could do.... ! 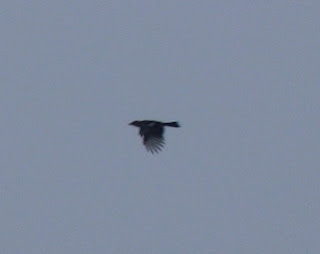 Other than that passage at the Bill was predictably slow, but there was a small flurry of Commic Terns for a while, and a couple of Arctic Skuas and a Bonxie, before it became deadly dull again. Some observers sought other ways to amuse themselves (and us)..... 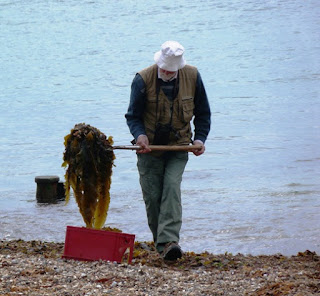 A slow sea-watch, so Papa Smurf (aka Dave Sneller) collects nature's bounty of free manure for his vegetable patch!

Peninsula: a Greenshank in Ferry Channel, at least 4 singing Reed Buntings along the Long Pool, 2 Common Terns, 11 drake Gadwall (of which several seem to be starting in eclipse plumage - failed breeders?), a pair of Shoveler (early a.m) and a Cetti's Warbler on the Ferry Pool. (AH/OM). Very little at Church Norton; about 10 Curlew, a Whimbrel, c.25 Dunlin and a few Ringed Plovers on the mudflats and just a few singing Blackcaps, a Whitethroat and a Chiffchaff in the bushes.

Monday, 20th May: A moderate northerly this morning was never going to make for a promising seawatch. Early reports received indicated there was little moving except Gannets, and a fuller report now appears below:-

Peninsula: Pagham Hbr was also quiet with c.12 Whimbrel, 15 Curlew, a Grey Plover, a Knot and a few Dunlin - and no sign of yesterday's Curlew Sand - plus a drake R/b Merganser this morning. (AH)
Evening walk, Mill Lane to Marsh farm, all within half a mile; 8 singing male Yellowhammers, 8 Whitethroats, Cettis's Warbler, Cuckoo, 2 Buzzards, Sparrowhawk and 4 brown hares (SH) 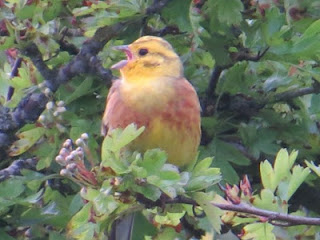