Friday, 21st March: Another bright and sunny start though a bit cooler than of late, with a fresh W/NW wind. First news of the day is from Ivy Lake (Chi GP's) where 50 Sand Martins were observed by Peter Callis.

Chi GPs: Ivy Lake: At least 50 Sand Martins present at 0815hrs, though most seemed to have gone by 0845 (PC). A look round late morning produced no hirundine  activity, but there was a singing Blackcap & several Chiffchaffs, one Mediterranean Gull, one Lesser Black-backed and two Great Black-backed Gulls, a handful of Pochard & Gadwall still, and several very smart Great Crested Grebes. (AH) 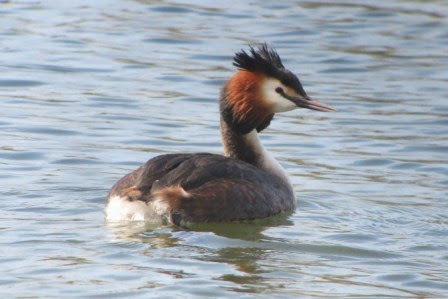 
Ferry Pool: Just 2 Avocets and 2 Redshanks, plus about 20 Curlews, amongst the usual flocks of Shoveler, Shelduck, Wigeon & Teal. (AH)
Chichester: At work this afternoon, on the outskirsts of Chichester and on the northern frontier of the peninsula, one of my colleagues alerted me to a female Sparrowhawk devouring one of the Feral Pigeon population. It had apparently chased the pigeon under a pallet, caught it, dragged it back out and sat eating it almost in the doorway of the mill for about a quarter of an hour, with half a dozen of us watching from 20 feet away, and other people coming and going, until eventually it had had its fill and disappeared up into a nearby tree. (AH) 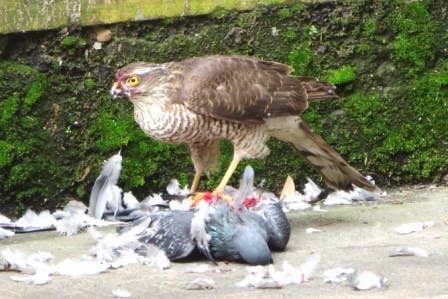 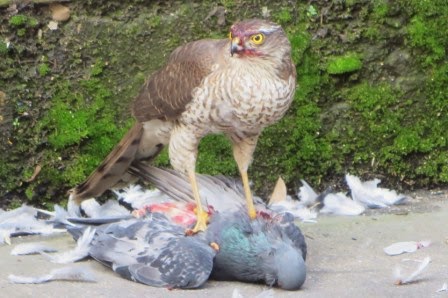 ﻿
Thursday, 20th March: A bright sunny start with just a light SSW wind and a slightly hazy sea, but with a weather front predicted to arrive by late afternoon - promising looking conditions for a sea-watch, so I decided to sit it out at the Bill this morning. I managed to put in a 4-hour shift, and over a dozen other observers also visited during this time. Amongst them were three of the Splash Point (Seaford) regulars - Bob Self with his good lady Katie, and Chris Brown - although they clearly hadn't picked a good day. Despite the good observer turnout the birds did not respond; it was very slow overall apart from a very small flurry of terns and divers early on....and sure enough the weather went from warm and sunny to decidedly cool and cloudy with a brisk SW wind by 1100hrs (OM). 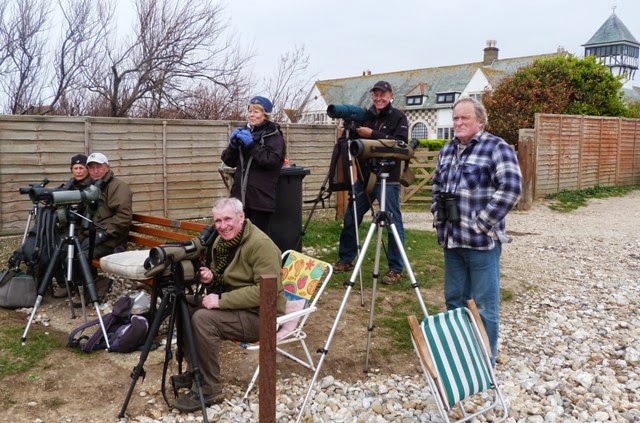 Sheltering from the brisk SW wind at the Bill; Seaford visitors Bob Self (seated centre), with partner Katie Hoff behind him and Chris Brown behind her, flanked by Peninsula regulars Colin & Mich Eames (left) and Dave Shepherd (right). (OM).

Ferry Pool: At least 60 Shoveler present early this morning, together with 2 Avocets which are apparently paired. A Kingfisher was hovering above Ferry channel before zooming off to perch up, whilst a Cetti's Warbler was belting out song above the roar of the traffic (OM) 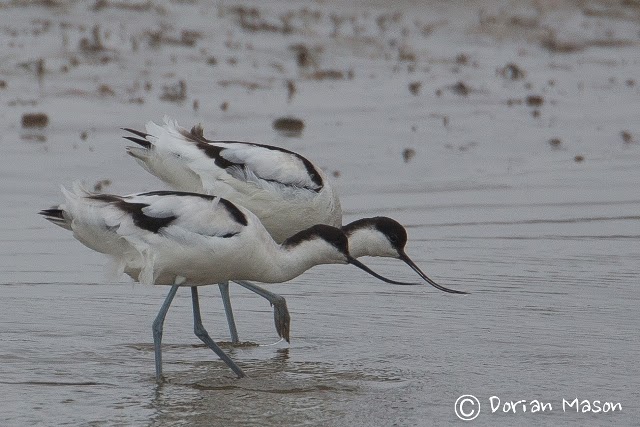 Avocets on Ferry Pool (D. Mason)
Pagham Lagoon/Spit: The Iceland Gull was on the Lagoon again early this morning, there were quite a few Linnets, Skylarks and Meadow Pipits along the spit, and a pair of Red-breasted Mergansers and about 40 Brent Geese were in the harbour. (AH) 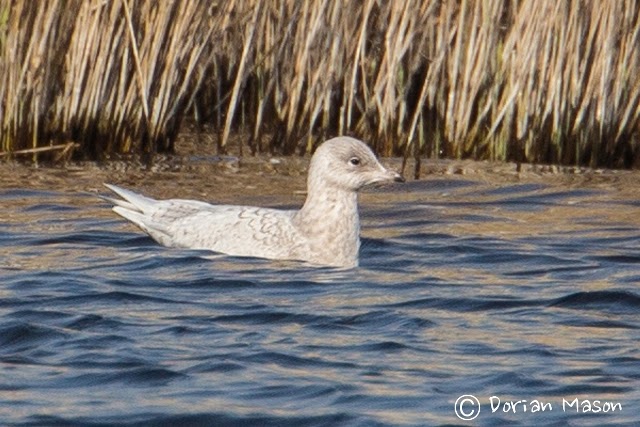 Iceland Gull on the Lagoon (D. Mason)
North Wall: Pretty quiet - most interesting thing was watching a Snipe swim across from one reed bed to the other! Otherwise a half dozen Black-tailed Godwits and a few Teal and Wigeon were present, a couple of Grey Herons were toing and froing in the fields behind and a couple of Reed Buntings and a Cetti's Warbler were singing half-heartedly. (AH) 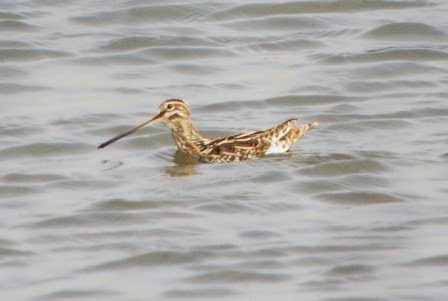 A swimming Snipe on the Breech Pool (AH)
Honer Reservoir: The pair of Whooper Swans were on here this morning, and at least 40 Mute Swans were on adjacent arable fields. CRJ also found a pair of Grey Partridges - a real rarity on the peninsula these days - in a nearby field and 3 Wheatears on ploughed land at South Mundham. (AH) 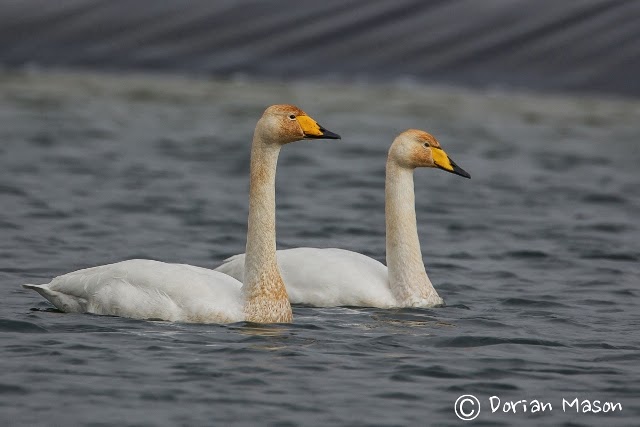 Whooper Swans on Honer Reservoir (D. Mason)
Just to complete sightings on my ride around the area this morning: Summer Lane S F area 2 Cetti's Warblers, 3 Chiffchaffs, 10 Pied Wagtails, 1 Reed Bunting. Halsey's Farm:  1 Chiffchaff;  Marsh FM: 1 Chiffchaff,1 Jay, 33 Starling and strangest record was of a single wary Greylag Goose in the middle of a grassy field, not claiming wild as so many ferals around, but ?? Runcton: 12 Fieldfare. (CRJ).

Medmerry: We took a short walk along the foreshore where we watched the high tide pouring into the new salt marsh, a really spectacular sight and worth visiting on a high tide. A single Wheatear was near the car park (BFF/DIS/DM).
Wednesday, 19th March: A cold, hazy day with a brisk south-westerly, and still nothing much moving at the Bill, although we are now well into the second half of the month. After last year's record count of Brent Geese there has (so far) been hardly any visible migration of the species this year, yet numbers are disappearing fast from the harbours....so it seems like the mild conditions and starry moonlit nights may have prompted some heavy nocturnal passage. Common Scoter and Gannet are another two species which have also barely troubled the scorers..... it must change soon! 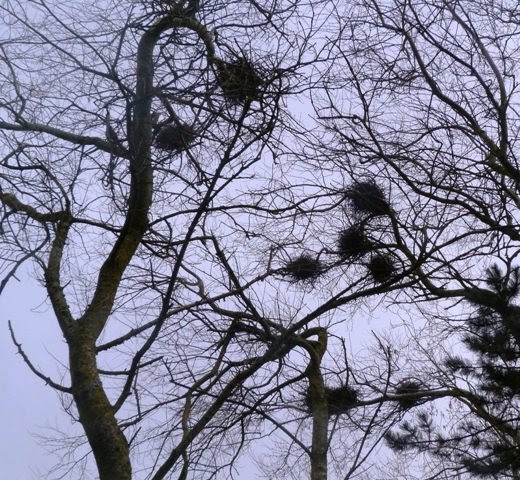 You know it's a slow news day when corvids feature heavily in the reports! The upper two pics show Rook activity and part of the substantial rookery, whilst the lower pic shows a small part of the Jackdaw flock feeding on the damp grassland at Northcommon Farm. (OM).


Ferry Pool: Still 6 Avocets there this morning, joined by 3 Black-tailed Godwits and a pair of Mediterranean Gulls, and a Kingfisher zipped over the road and along the southern bank. At least 40 Shoveler also still present, the majority being drakes. Later on, CRJ had a Wheatear at the back. (AH)
Church Norton: Much the same as the last few days; nothing offshore when I looked, but 1-2 R/b Mergansers in the harbour, the Peregrine in its usual place on New island, a Buzzard soaring and the Spotted Redshank in the horsefield channel with Redshanks (OM)
Pagham Lagoon/spit: The regular Iceland Gull was still present late morning (Matt Eade) and at least 4 Wheatears were on the Spit (G. Hughes). 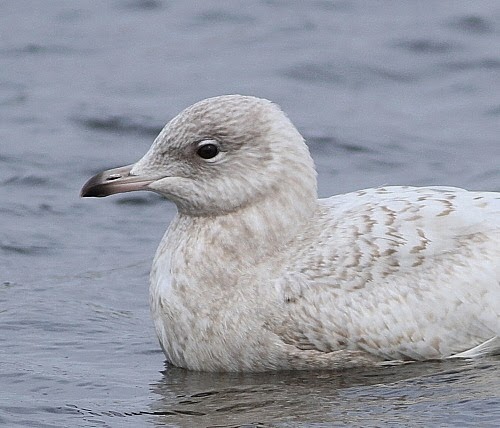 Iceland Gull on Pagham Lagoon (John Cooper)
Medmerry Bank: (Earnley-Bracklesham) Highlight of a good check of the site was a Raven over south-west at about 10.30am. Also a flock of 110 Golden Plovers got up several times from the eastern end, and there were 3 Avocets and a pair of mating Oystercatchers on the pools to the west of the bank, along with 20+ Tufted Duck and Teal and a Greenshank was heard but not seen. There was a good selection of passerines, including 26 Fieldfare, 20+ singing Skylarks, 10+ Meadow Pipits, 12 Yellowhammers, 30 Linnets, 1 Jay, 1 singing Chiffchaff, and 20 Goldfinch. There were also at least 5 Buzzards, 4 Great Crested Grebes, 10 Little Egrets, 30 Stock Doves and 40+ Shelducks about. (AH/CRJ) 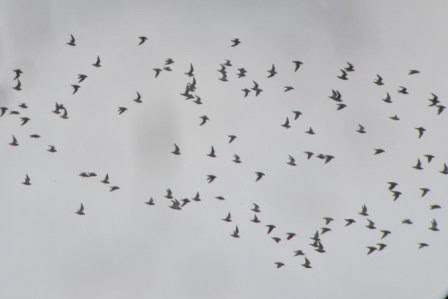 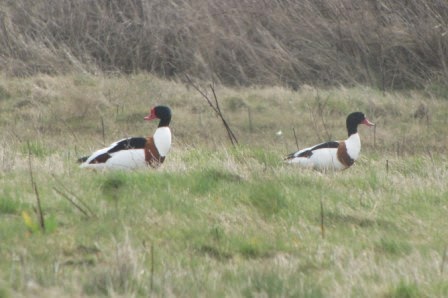 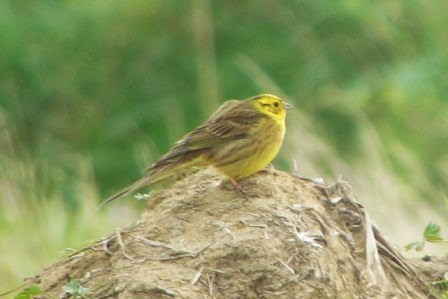 Chi GP's: Ivy Lake: The usual wildfowl in reducing numbers but otherwise little to report; a lunchtime visit failed to locate any hirundines and it was quiet apart from a couple of displaying Buzzards, 2+ singing Chiffchaffs and the increasingly noisy and smelly Cormorant colony! (OM).
Posted by Andrew House at 12:18