Thursday, 6th March: A bright and breezy morning, but thus far little evidence the migratory birds think it is spring..... 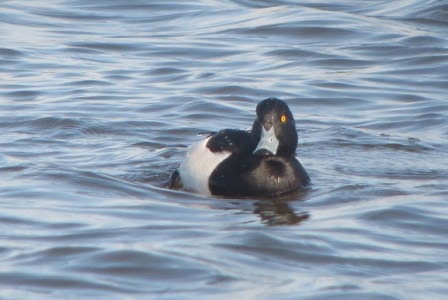 Tufted Duck on the Ferry (AH)


Pagham Lagoon: Just a handful of Mediterranean Gulls this morning, though the tide was very low. Trevor Guy reported 5 Goldeneye earlier that flew into the harbour. (AH)

North Wall: The North Wall has been quiet all week, just low numbers of Curlew and Wigeon in the fields. The Grey Herons have been busily nest renovating at Owl Copse. Today was much the same but there were 56 Mute Swans behind Bramber Farm and a pair of Kestrels appear to be nesting in the same area.  Three pairs of Lapwing were displaying in the fields west of Fisher Well and there was a White Wagtail at Fisher. En route 6 Roe Deer and a Small Tortoiseshell Butterfly. (JW).
Wednesday, 5th March: A lovely early-spring morning with plenty of sunshine and light wind. No definite incoming migrants yet reported on our patch, but given the forecast of a southerly airstream and warmish weather over the next few days, surely it won't be too long before the first Wheatear or Sand Martin arrives? Keep looking .....!

Porthole Farm/Sidlesham SF: A look round this morning produced 2 Yellowhammers, 2 'chiff-chaffing' Chiffchaffs, 2 Cetti's Warblers, 2 or 3 Meadow Pipits, a Skylark, a Buzzard and about 80 Pied Wagtails. (AH) 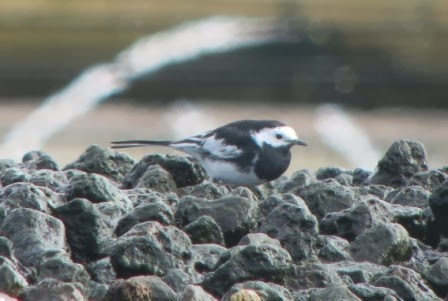 Pied Wagtail at Sidlesham SF (AH)
Medmerry:  A very pleasant walk from Easton Lane to Ham Lane across farmland produced 2 Kestrels, 4 Reed Buntings, 12 Skylarks, 22 Yellowhammers, 11 Pied Wagtails in the stubble and a Green Woodpecker. (SR). Still on the subject of Medmerry, the ringed Sanderling on the beach (see yesterday's report) was bearing colour rings and a small blue 'flag' (see pic). Info has now been received detailing where the bird was ringed and subsequent sightings...... originally ringed Eastoke, Hayling Island on 18/9/2013, it was subsequently recorded twice more on Hayling in autumn 2013, then on 26/2/2014 at West Wittering, before wandering to Medmerry, (with thanks to Paul Stent). Guess it will be on its travels further afield soon! 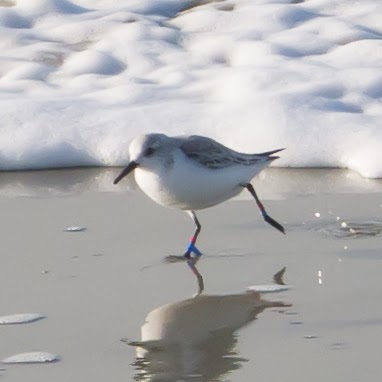 Tuesday, 4th March: Dry and fine with a light to moderate breeze and feeling a bit like spring - but with no early migrants located. At the Bill a light westerly didn't encourage any proper movement, though the potential bird of the day managed to escape the Log and was the subject of some discussion. An interesting grebe passed W and two of the four observers present were confident of the ID as a Red-necked, whilst the other two were less so and just couldn't be sure Great Crested had been fully eliminated. I plead guilty to being in the latter camp and sorry if I'm wrong, but only grebe sp. has been logged due to this uncertainty! Meanwhile the Iceland Gull at Pagham Spit/Lagoon continued to play hide-and-seek, showing well at times to some birders and eluding others; I'm in the latter camp there too! (OM). 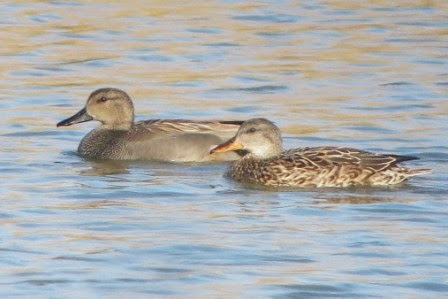 Pagham Hbr: North Wall: Pretty quiet along the North Wall - a singing Reed Bunting, 4 Gadwall, 100+ Teal and 2 or 3 Snipe on the Breach Pool were the highlights. (AH)

Gadwall (above) & Reed Bunting on the Breach Pool (AH) 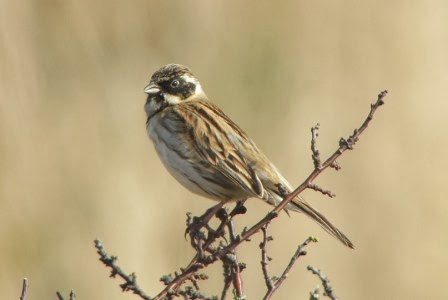 Pagham Spit/Lagoon: No sign of the 'interesting' gulls this morning, though there were 4 Sandwich Terns around the harbour mouth. On the Lagoon, at least 150  Mediterranean Gulls and 20+ Common Gulls, along with at least 5 Goldeneye & 4 Great Crested Grebes. (AH) Also 2 R/b Mergansers and a Kingfisher there and later the Iceland Gull appeared at about 1300hrs (per Ads Bowley) but frustratingly had disappeared again by about 1345hrs! (OM) . Two Sandwich Terns roosting on the Spit with Med Gulls (Trevor Guy). 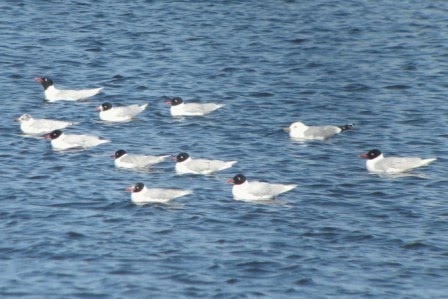 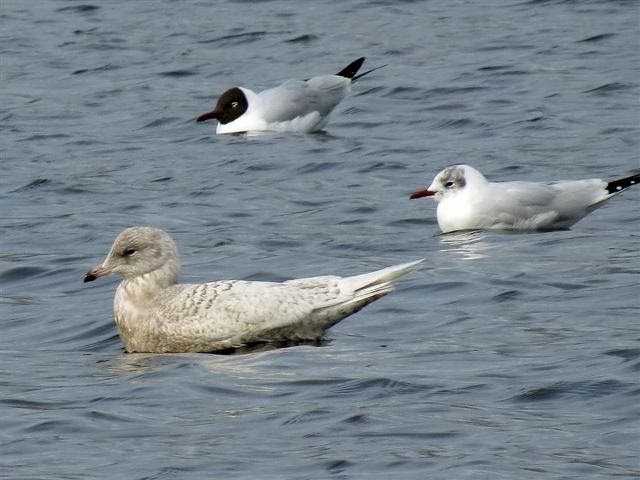 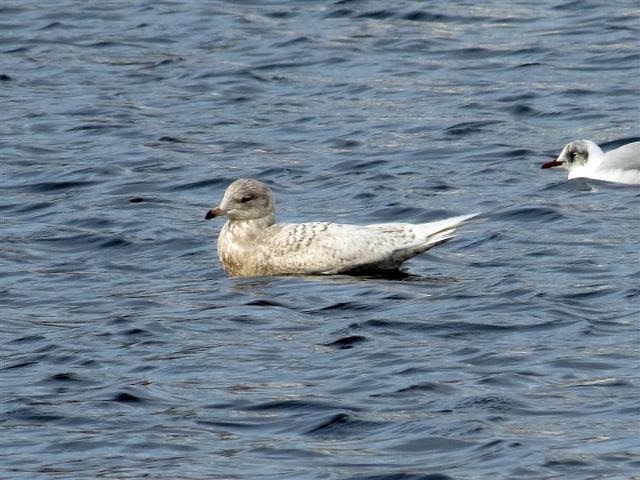 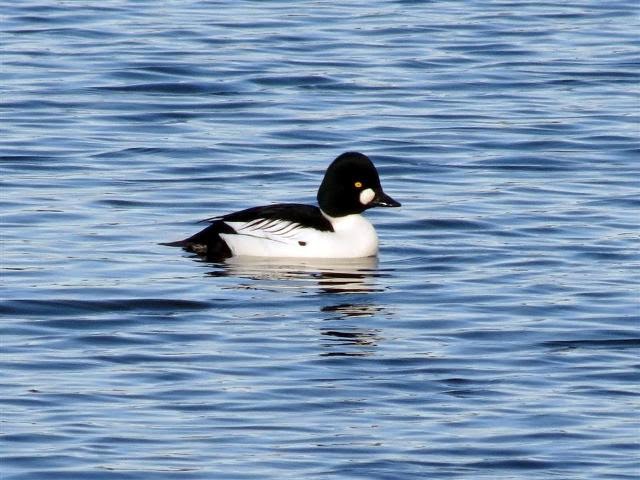 Medmerry: I walked the banks on the west side (Easton's Lane to the sea) and saw a similar selection of birds to that seen by other observers over the last week: a single Avocet, 50 Lapwing, 12 Shelduck, 15 Tufted Ducks, 17 Gadwall, c. 120 Teal, 20 Curlew and a Buzzard (OM). I was down Medmerry (Earnley end) this morning and found these 4 Sanderling on the beach. I noticed the left one in the picture had what appears to be 2 rings on the tarsus of each leg, with both being pink(?) over bright blue. (The 2 in the middle both managed a worm each). Wondered if you had any info perhaps on ringed Sanderling ? Paul Stent)               (I seem to recall a ringed Sanderling project; any info anyone? OM) 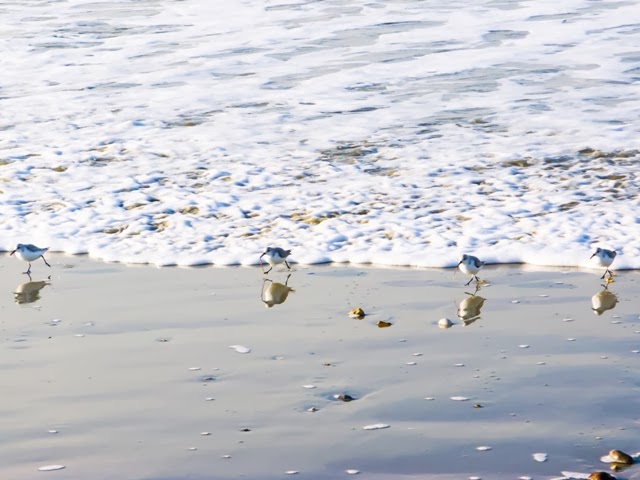