Thursday, 27th March: Yet another cold, grey start this morning, with a bit of hail for good measure.... news from the Bill of a light-phase Arctic Skua and a flock of Brent Geese early afternoon (with thanks to C&ME).. I didn't make it out into the field today and no early morning sea-watching seems to have taken place, with the only report from early afternoon.... we must do better tomorrow and conditions look set to improve (OM). 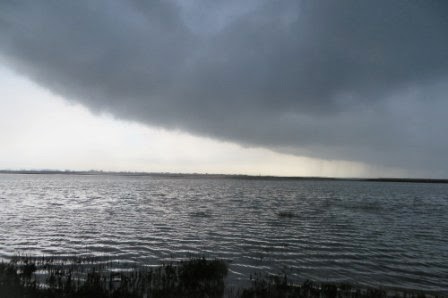 The view across the harbour early this morning (AH)
Ferry Pool: Slightly brighter here and a few more birds, too, including four Avocets, and at least 10 Lapwings and 8 Redshanks displaying and tussling on the field. Otherwise it is a bit of a duck paradise at the moment, with Shelduck, Shoveler, Mallard, Teal, Gadwall, Wigeon & Tufted Duck all represented, and two Red-breasted Mergansers in the channel opposite. (AH) 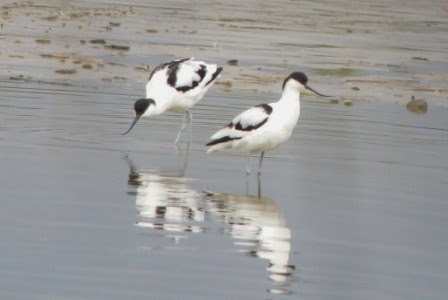 Avocets (above) & Shelduck and Shovelers on the Ferry (AH) 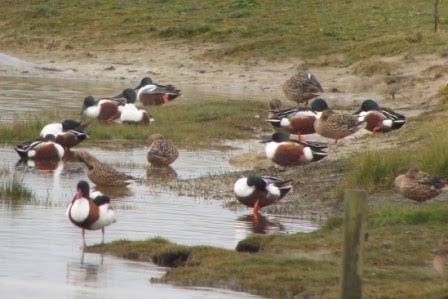 Wednesday, 26th March: Another cold day with the wind from the north keeping birding highlights to a minimum..... 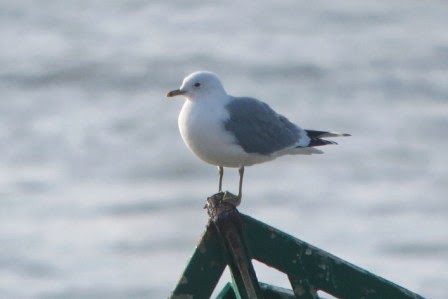 
Medmerry: West Beach this morning: 1 male Wheatear, 12 Meadow Pipits, 1 Pied Wagtail, 8 Linnets, 1 Kestrel. Looking from the walls at the new pools it was noticeable all the geese and wildfowl had left, there were just a few Lapwings (some displaying), and a handful of gulls. (SR)

Ivy Lake: No hirundines this morning, but the pair of Bullfinches were still there, being as elusive as ever along the main path, and there were at least 2 Chiffchaffs and 2 Cetti's Warblers calling. (AH) 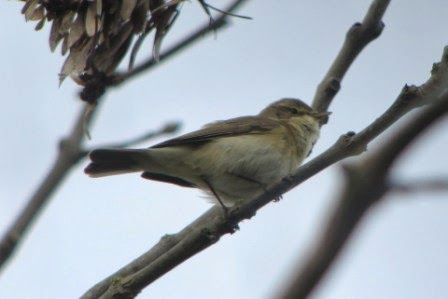 
North Wall: All very quiet this morning. 48 Black-tailed Godwits along White's Creek, some in smart breeding plumage. The Breech Pool had filled up again with the high tide. The pair of Great Crested Grebes are still present but no display activities yet. The Little Grebes are still in residence at Owl Copse. A pair of Common Buzzards were performing aerial circles near to Halsey's Farm. (JW) The pair of Spotted Redshanks were back in White's Creek later on. (ARK per SOS) 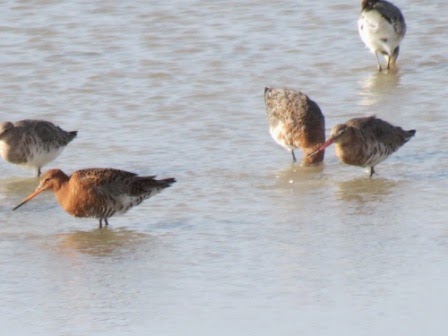 
Pagham Spit/Lagoon: I arrived at the Lagoon at 09.30 to find the Iceland Gull having breakfast (white bread) and when I left at 11.30 it was having lunch (white bread). Also here one Goldeneye (first-winter), a Kingfisher, three Brent Geese (40 more in the Harbour) and three chiffchaffs while further along on the Spit were three Wheatears.(ARK per SOS)


Tuesday, 25th March: A cold, grey morning with a nagging north-easterly wind bringing more rain our way than it should. Evidence of migration is still at a premium, but as always, something turns up to brighten the day - and this morning it was a Merlin in off the sea at the Bill.....although four long cold hours in the rain for some, requiring umbrellas for much of the time, took some of the gloss off the spectacle! 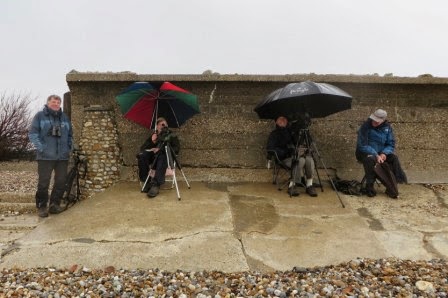 Devotion to duty at the Bill! BFF, OM, DF & JD waiting for the rain to ease (AH)
Selsey Bill (0730 to 1130hrs): The full log follows, but highlights included the Merlin in off the sea, just a few Sandwich Terns and a handful of Gannets and Fulmars, small flocks of Meadow Pipits in and over and half a dozen divers on the sea, of which the identification of one or perhaps two was a matter of some debate (considered as definite Black-throats by some experienced observers though not unanimously).
Great Northern Diver - 4 os
Diver sp -  2 os; at least 1 considered to be Black-throated and the other a probable (BFF/DIS/DM)
Fulmar - 8W
Gannet - 4E, 1W
Common Scoter - 3E
R/b Merganser - 4E, 5os
Merlin - 1N (0958hrs)
Sandwich Tern - 5E, 2W
Wheatear - 1N
Pied/alba Wagtail - 1N
Meadow Pipit - 118N

Selsey East beach: This afternoon 1 Wheatear, 47 Turnstones, 1 Red-breasted Merganser close in, and a Sparrowhawk (SR).
﻿
Church Norton: Fairly cold, wet and miserable! Four Red-breasted Mergansers and 20 Curlews in the harbour, and a few Linnets, Meadow Pipits and Chiffchaffs along the west side was the best I could find. Late afternoon there were a dozen Red-breasted Mergansers in hte harbour and 60 Brent Geese flew in.(AH)
Ferry Pool: The 6 Avocets were still present. (OM)
North Wall: The Breech Pool is looking very sorry for itself, the east and west ends are open mud. Still around 30 Teal, 6 Tufted Duck and a pair each of Little and Great Crested Grebes. Waders were represented by 4 Black-tailed Godwits and 2 Spotted Redshank both of whom were showing the first signs of breeding plumage. The Little Grebes at Owl Copse appear to have evicted the Coots and taken over their nest. It does appear to be in a very exposed position.  Coming back I was surprised to see 2 Weasels appear on the track barely 20 yards in front of me. I was watching then run around through bins when a Magpie suddenly pounced and carried the smaller one away. The survivor spent several minutes running around as if distressed and looking for its missing partner.  Sods Law really, the first time I see weasels on the Wall for 3 years and then promptly lose one!. (JW). 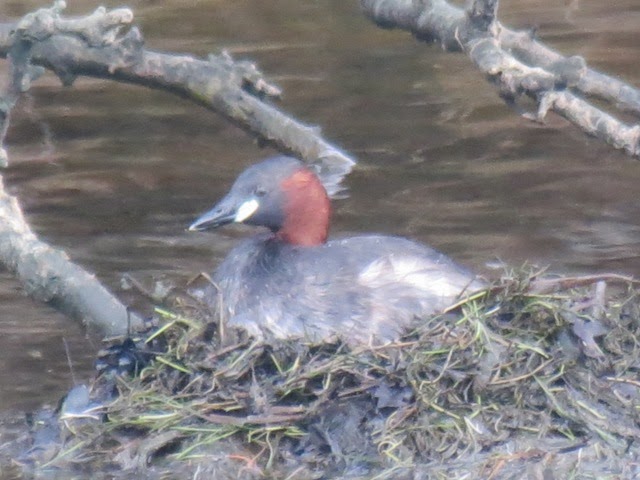 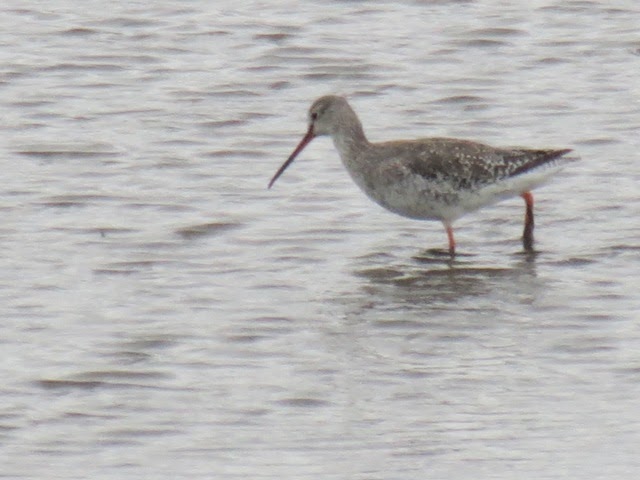 Pagham Lagoon / Spit: The Iceland Gull was again present on the Lagoon this morning (TR) but was as usual missing later..... it was found on the beach from the Spit this afternoon (BFF/DIS/DM).
Ivy Lake: About six Sand Martins were high up over the lake at lunchtime. (AH)
Posted by Andrew House at 12:00