Sunday, 15th June: A rather grey and dreary day, with a cooling northerly wind....

Medmerry: The three Black-winged Stilt chicks are still doing fine, though the parents have
moved the young into the grass on the spit behind the nest site, making it harder to see them.
One of the brooding Avocets nearby stood up to reveal at least three youung chicks, and there were numerous Little Ringed Plovers around including at least three young birds.
A young Stonechat on the nearby fence, but with no sign of any parents.
Up to the breach there was another pair of Little Ringed Plovers, a single Grey Plover, a pair of Redshank and at least twenty Black-tailed Godwits, and walking back to Easton car park there were a Cuckoo and a Jay in the treeline. (IP/PB)
From West Sands, the Curlew Sandpiper was again on the pool nearest the breach, along with 2 Sandwich Terns, 3 Bar-tailed Godwits, 12 Dunlin, 4 Turnstones and 45 Grey Plovers and a Corn Bunting was singing from the far side of the big pool. There were also still at least 70 Common Scoter offshore from the Coastguard station, and a few Little, Common and Sandwich Terns moving offshore.(AH) 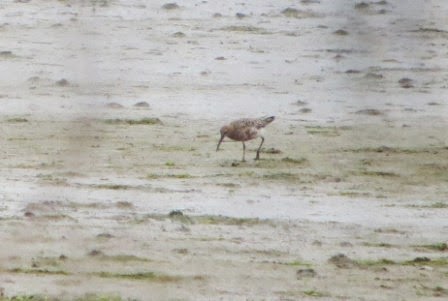 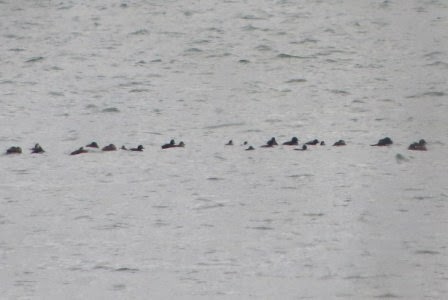 All three Black-winged Stilt chicks were still doing well last night, and likewise the four new Avocet chicks. A Little Tern and a Common Tern drifted in for a short visit, the Little Owl was still in residence and a few Gannets, Common and Sandwich Terns were offshore right up to dusk. (AH)﻿ 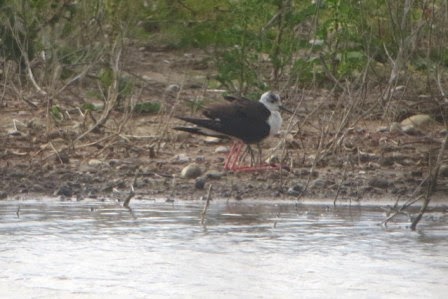 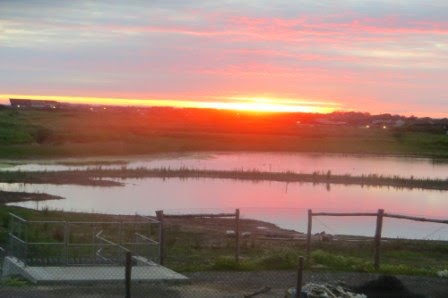 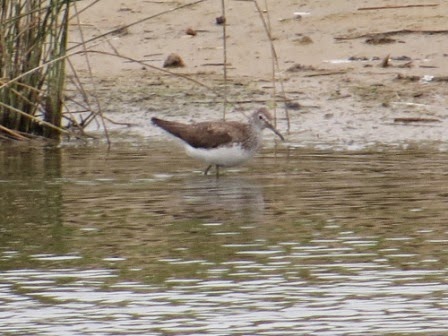 Church Norton: There were 10+ Little Terns - one feeding a young bird on Tern Island and also 2 offshore carrying food back to harbour. There were 24+ Common Terns on the island, too, and at least  that many again feeding offshore.
At Park Farm there was a newly fledged Swallow, at least 10 Reed Buntings, including several young, and 2 Cuckoos were along the Severals, and 3 Gannets were offshore. (S&SaH)

Porthole Farm: At least 50 Swifts, 50 Swallows and 20 House Martins over the sewage farm, and two or three Yellowhammers, a pair of Stock Doves, a dozen Linnets and four Whitethroats nearby. (AH) 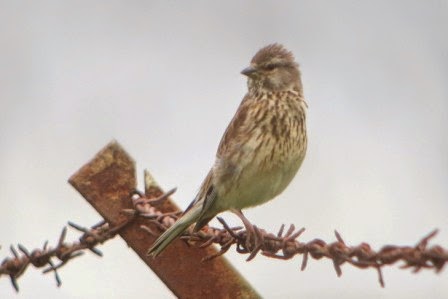 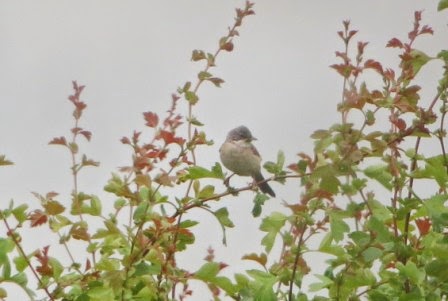 North Wall area: A Cuckoo was still calling at Honer. All quiet on the Breech Pool, just 22 Mallard, 9 Tufted Duck, 1 Great Crested Grebe, 2 Grey Herons and Little Egrets, plus 7 Swifts overhead. A pair of Coots with 3 chicks were at Owl Water. There was a steady north/south passage of Cormorants commuting between the Harbour and gravel pits, and a pair of Mute Swans and 5 cygnets were still on Pagham Rife. (JW) 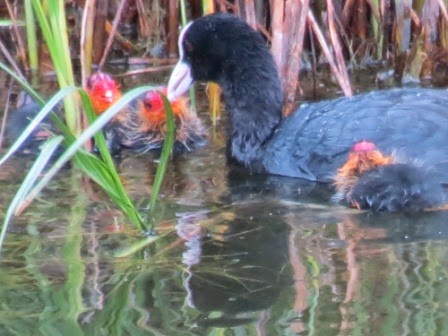 Coot with young at the North Wall (JW)

Medmerry: The second Black-winged Stilt chick hatched this morning around 8am and by midday both chicks and parents were doing well, and being watched over by a growing crowd of admirers.  A big thanks to all volunteers, and especially Mick Davis & Billy (the Scottish gentleman) who did the night shifts over the last few weeks.
Elsewhere, around half a dozen Avocets continue to sit tight and at least that number of Little Ringed Plovers were about, including several youngsters. At the breach the Curlew Sandpiper was present again, along with 4 Bar-tailed Godwits, 6 Black-tailed Godwits, 8 Dunlin, 6 Turnstones, 85 Grey Plovers and 6 Sandwich Terns. A few Gannets were feeding close offshore early on, and there were still numerous Lapwings, Skylarks, Meadow Pipits, Linnets and one or two Yellowhammers and Reed Buntings in the rough grass area. (AH)
This afternoon around 2.15pm the third chick was seen to have hatched, and this evening there was the Curlew Sandpiper, 6 Black-tailed Godwits, a Little Tern and 3 Dunlin around the Stilt's pool area. Also the regular Little Owl was seen nearby, and another two on Easton Lane, plus a Barn Owl over the road in Almodington.(S&SaH) 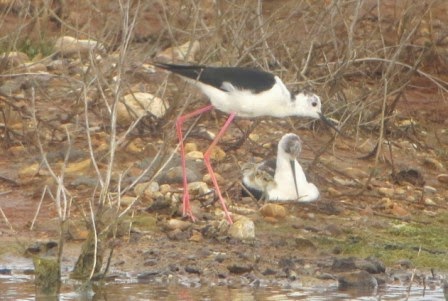 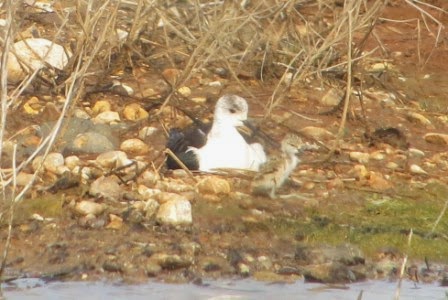 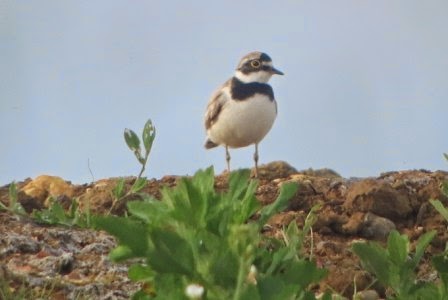 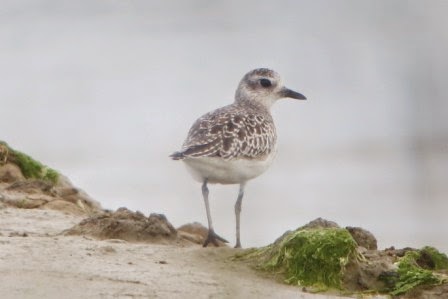 Ferry Pool: A sure sign that the year is starting to turn - a Spotted Redshank (still in smart summer-plumage) and a Green Sandpiper on the Ferry at lunchtime today. Also 40 Black-tailed Godwits, 11 Avocets, 8 Redshank and 6 Lapwings. Also, a nice group of Bee Orchids nearby.(AH/CRJ) 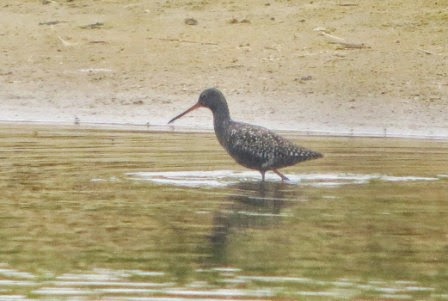 Spotted Redshank (above) & Bee Orchid at the Ferry (AH) 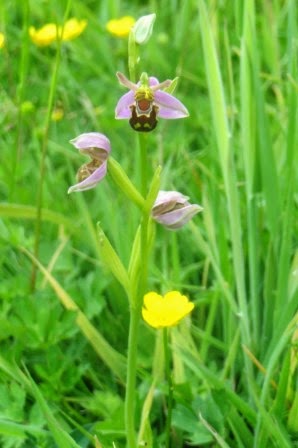 Church Norton: A Lesser Whitethroat was singing near the Severals this afternoon, and there were 2 Little Grebes on the second Several. (S&SaH) 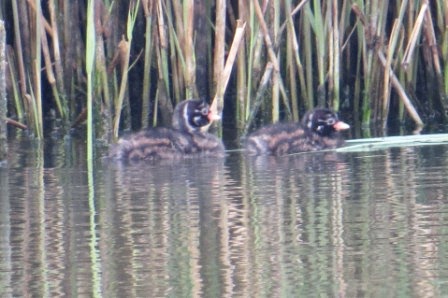 Little Grebe chicks at Church Norton (SH)
Friday, 13th June: A very warm day with hardly a breeze, and some big news - the first Black-winged Stilt chick has hatched and was doing well this evening, as we wait to see if the other two follow suit overnight. Further developments will be reported tomorrow..... 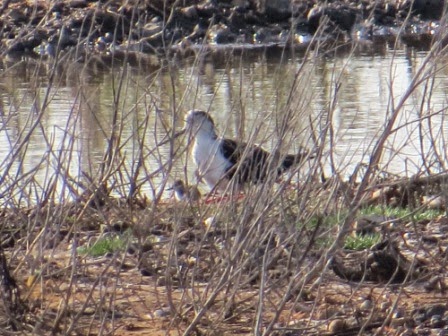 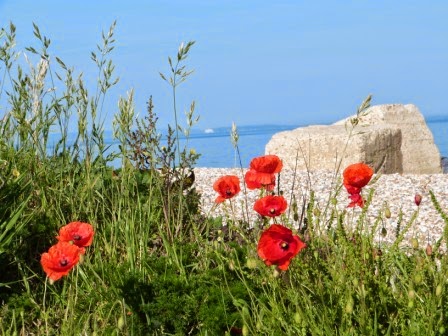 Fishbourne Creek: Still 6 Brent Geese here, presumably for the summer now, along with 5 Curlew, 2 Lapwing, 2 Redshank, 150 Mute Swans and 14 Lesser-black Backed Gulls. Very quiet in the hedgerows - a couple of Blackcaps and a Chiffchaff singing was about it. (AH) 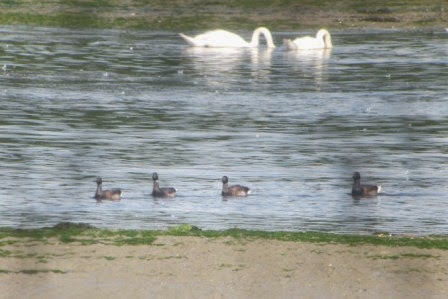 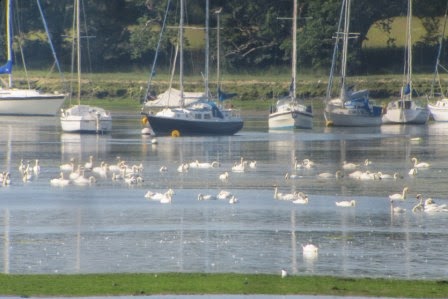 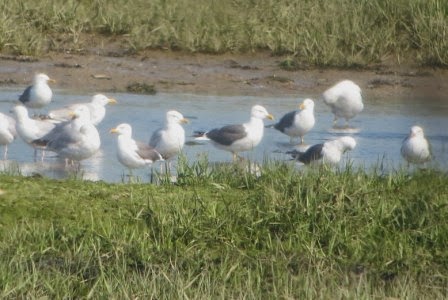 Ferry Pool: There were 42 Black-tailed Godwits feeding this morning in the middle of the pool. Also 12 Avocets, now 6 Teal, 6 Lapwing (including a juvenile), 2 Redshank and the big family of young Shelducks. (AH) 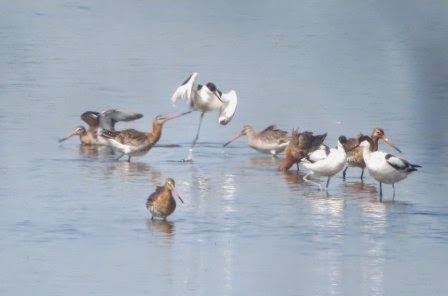 Avocets and Black-tailed Godwits (above), Avocet & Lapwing on the Ferry (AH) 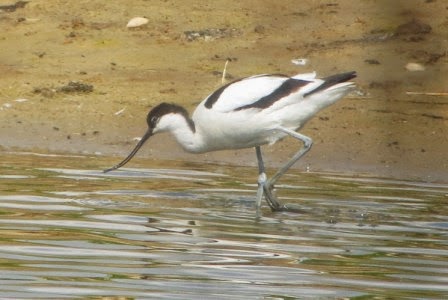 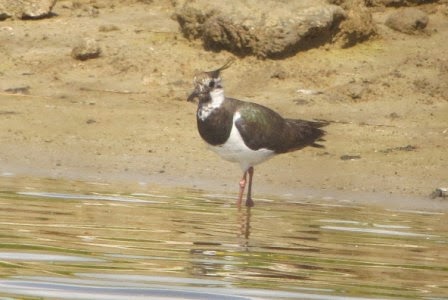