Friday, 27th June: Another dull and cloudy morning, but largely dry.....so where was all the heavy and thundery rain that was forecast? As the day progressed the weather actually improved, becoming sunny and fairly warm by mid-late afternoon. Perhaps tomorrow then!  Meanwhile, the brisk W wind lured me down for another look at the sea, but this was the worst yet and I only managed to last and hour and a half today (OM). 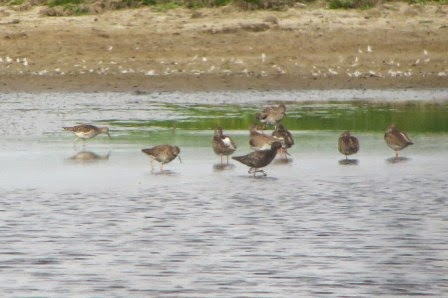 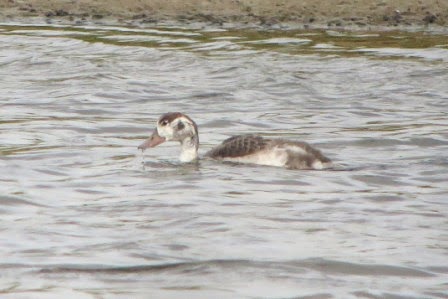 Church Norton: A couple of Gannets along with a few Little, Common and Sandwich Terns were offshore, and along the Severals there were one or two bursts of Whitethroat and Sedge Warbler song. (AH)
Medmerry: There was a pair of Ringed Plovers just east of the breach this morning with 4 chicks. Later on, the Black-winged Stilts were seen out in the middle, still chasing off anything encroaching too near. (PH)

On the Avocet pools at Medmerry, ten or so Avocets, singles of Ringed Plover and Little Ringed Plover, plenty of Linnets and Skylarks about and a constantly singing Corn Bunting. A Little Tern over the pools and a few Sandwich Terns fishing just offshore. About ten Common Scoter were still offshore from the Coastguard station at high water. (BI)
At Porthole Farm this evening there were about half a dozen Yellowhammers and similar of Stock Doves, at least 50 each of Swift, Swallow and House Martin were over the sewage farm, and a young Hare along Ham Lane somehow ended up on somebody's doorstep as it retreated from the middle of the road. (AH) 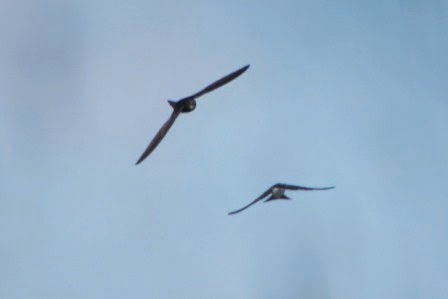 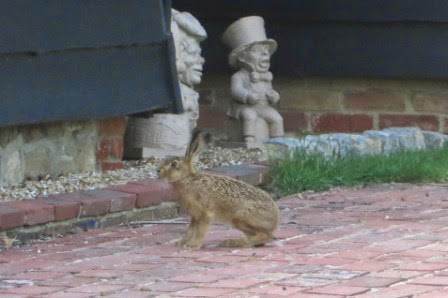 View from the Bill-tip, looking west: you know it will be a slow sea-watch when the Isle of Wight stands out this clearly! Note how prominent the white Culver cliff appears (centre) (OM). 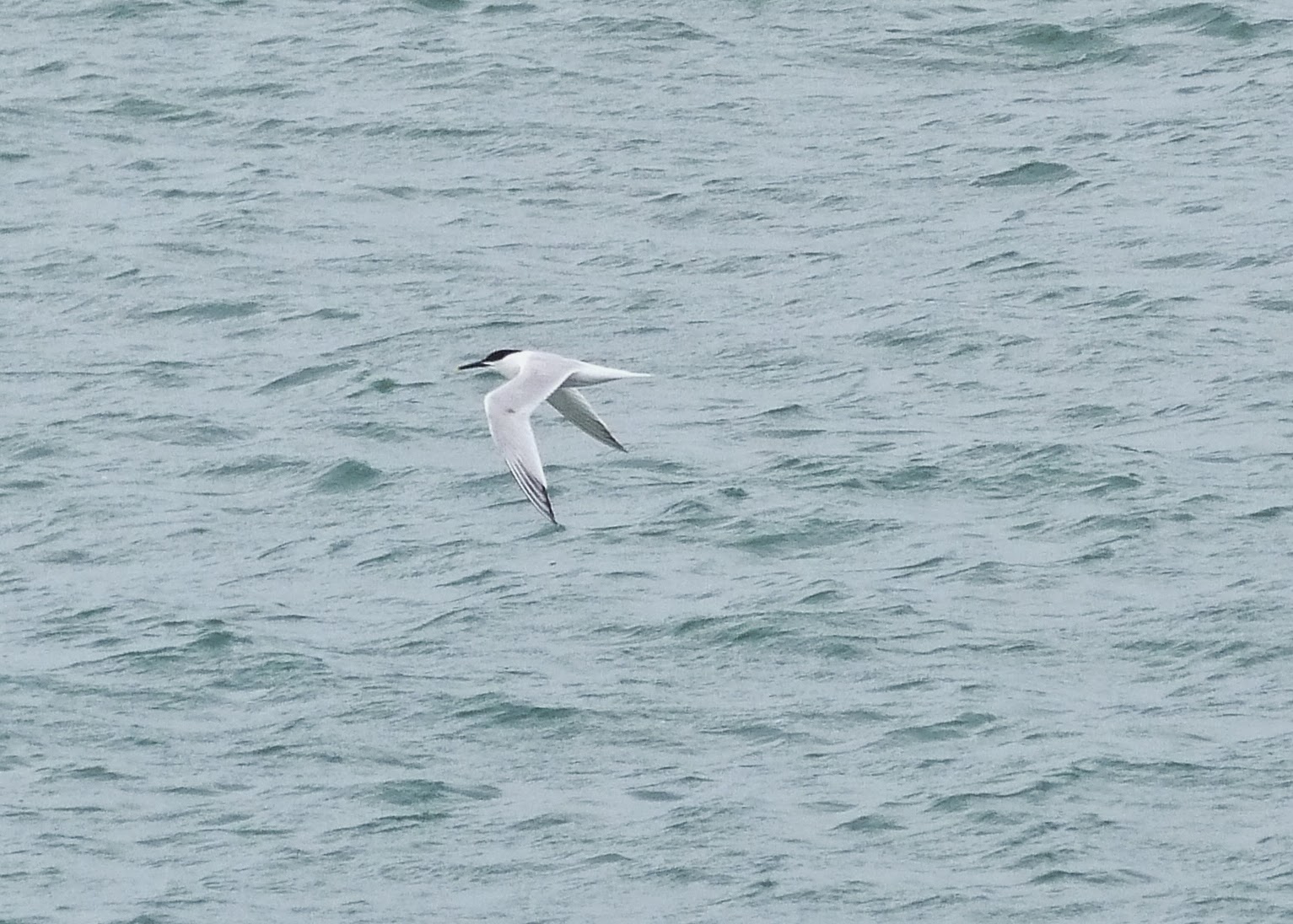 Sandwich Terns heading east and fishing off the Bill (OM) 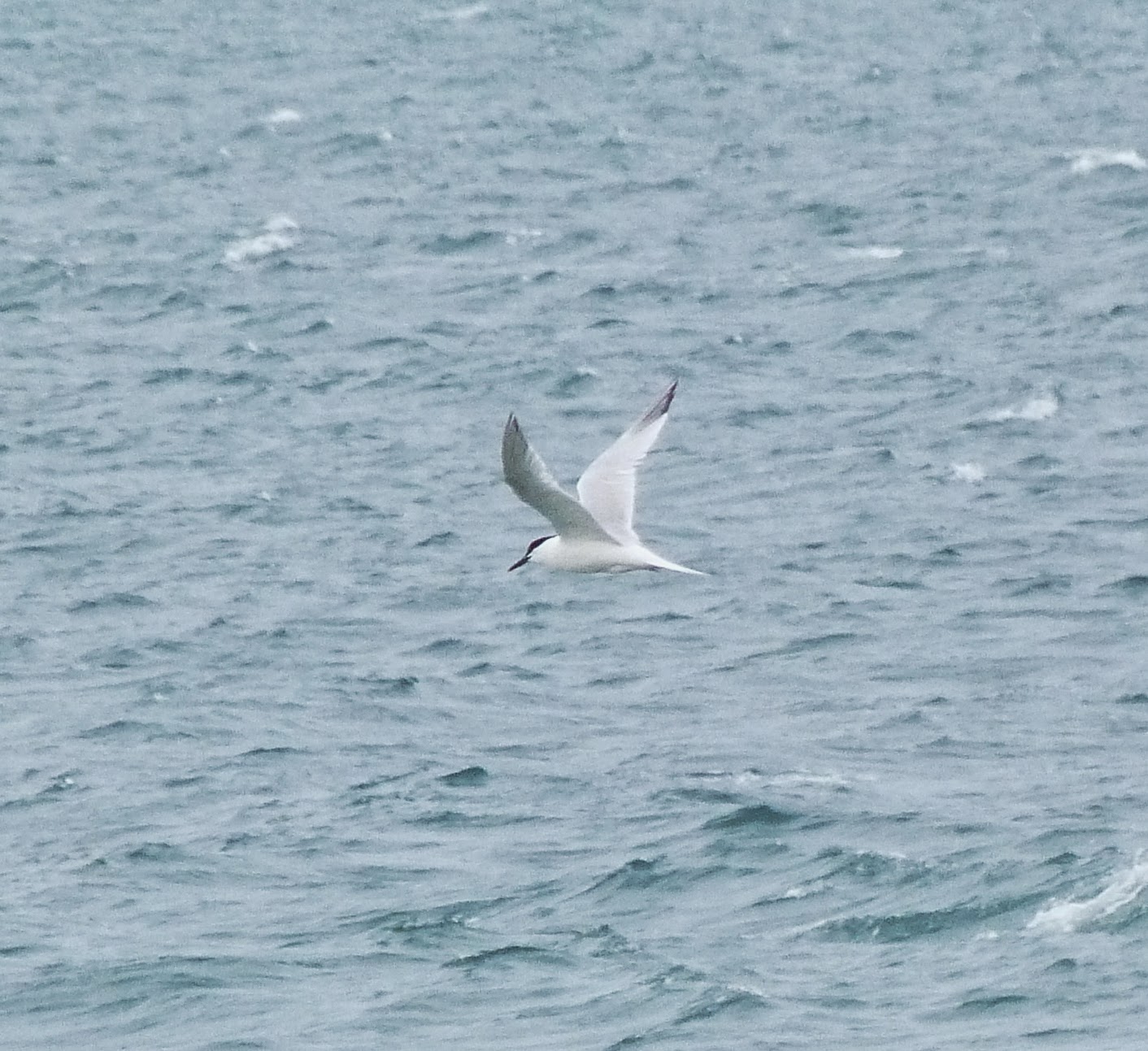 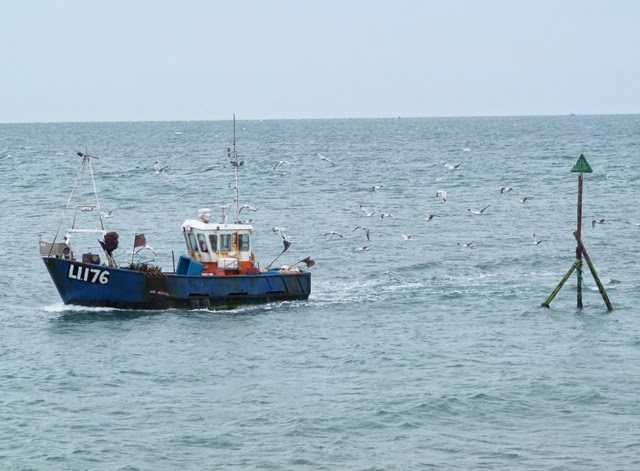 Classic view of a local fishing boat passing the Bill-tip, close in and followed by an entourage of mainly Herring Gulls - not a hint of a petrel with them, but always worth a check! (OM)
Ferry Pool: The Spotted Redshank, Ruff and a Green Sandpiper all still present this morning, along with 20+ Black-tailed Godwits, 40+ Redshank (including the two chicks), 6 Lapwings, 4 Avocets, 8 Teal and a pair of Stock Doves. (AH/OM) 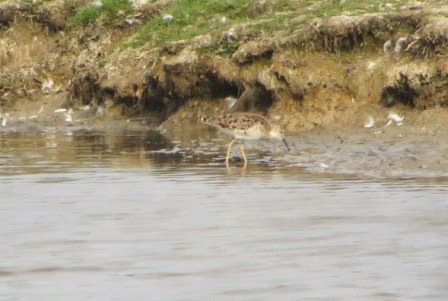 Ruff (above), Black-tailed Godwit & Redshank with chick on the Ferry (AH) 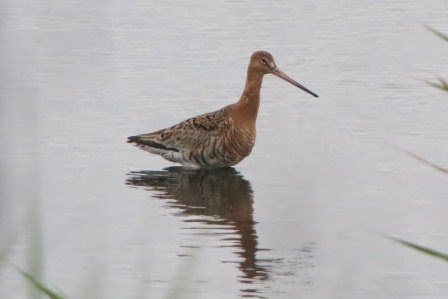 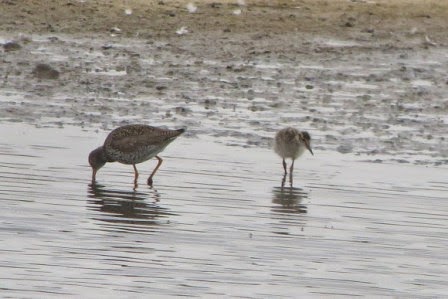 Church Norton: A young Grey Heron upsetting all the birds in the harbour revealed at least 60 Curlew and 20 Shelducks. There were also a few Little and Common Terns feeding in the harbour, and 2 singing Blackcaps, a Chiffchaff and a Great Spotted Woodpecker around the car-park. (AH) 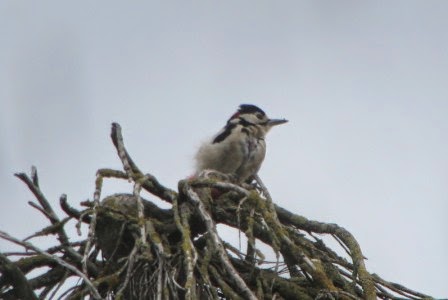 Great Spotted Woodpecker at Church Norton (AH)
North Wall: A Kingfisher flew across the wall and on the saltings was an adult Yellow-legged Gull, at first with the Great Black-backed Gulls but then flew off towards the Ferry, and there were say 150 Curlew here too (ARK/per SOS)

Wednesday, 25th June: Another pleasant summer's day, fine and sunny with a variable light-moderate breeze, though feeling a little fresher than of late.
Not much birding news received by early evening; my excuse is that I spent most of the day gardening, so I can hardly complain! (OM)

Ferry Pool: The Spotted Redshank and Ruff were still at the back of the pool early this morning. Also present were half a dozen juvenile Lapwings, 6 Black-tailed Godwits, 11 Avocets, 40+ Redshank (including 2 chicks) and 8 Teal. (AH) 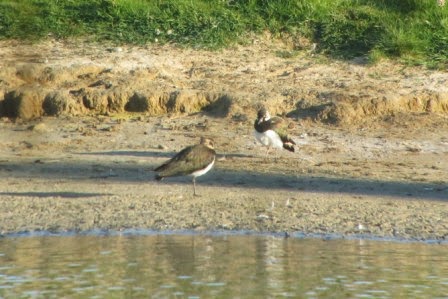 Juvenile Lapwings on the Ferry (AH)


Church Norton: A Peregrine over the Severals this evening, 4 Sandwich Terns offshore, a couple of Blackcaps singing, and 15 Curlew and 6 Common Terns in the harbour. (AH)