Saturday, 21st June: Warm, sunny and dry with a coastal breeze, SW 3-4; a delightful summer's day and very fitting for the longest day of the year.

Ferry Pool: The Ruff was still at the back of the pool, rather upstaged by the showy summer-plumaged Spotted Redshank. There were also 44 Redshank, 10 Avocets, 7 Teal, 4 Lapwings, and at least 16 Shelduck chicks with their attendant adults. (SR/AH) 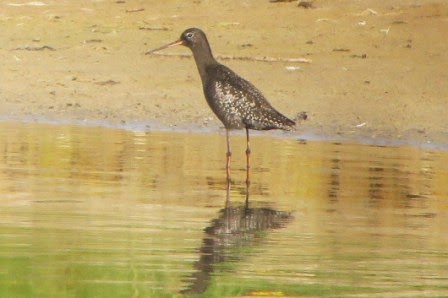 Spotted Redshank (above) & with Avocets, Redshanks and Black-tailed Godwit on the Ferry (AH) 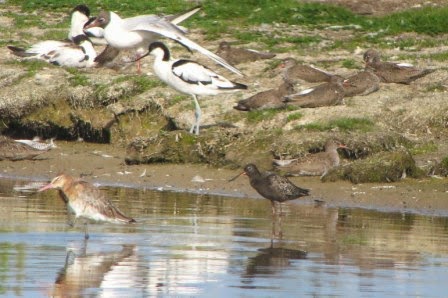 Church Norton: After not seeing any Blackcaps on the estate since the end of April we had four singing males this morning.
On the second Several the Mute Swans have three well grown cygnets that they have kept hidden from us. There were three Little Grebe young with their parents and a much older juvenile on its own.
In the harbour 20+ Common Terns flew up from Tern Island briefly, and 6+ Little Terns were around the island, and offshore 20+ Sandwich Terns, some carrying fish back east. Also one Cuckoo about. (S&SaH)
Medmerry: We saw both adult Black-winged Stilts this afternoon - they were obviously still protecting something because they were chasing everything off. In the breach area we saw 1 Ruff, 1 Green Sandpiper, 12 Turnstone, 6 Dunlin, 2 Little Ringed Plovers and one of the young Avocets, which is now flying. Also there were 3 Buzzards, 1 Reed Bunting and 20+ Whitethroat. (S&SaH)

Ham Farm area - still at least 5 singing Corn Buntings this evening, plus numerous Skylarks, Linnets and several families of Meadow Pipits on the uncultivated land. Also at least half a dozen Stock Doves and Lapwings around, too. At the breach there were about 75 Grey Plover, 30 Turnstone and 20 Dunlin roosting on the high tide. (AH) 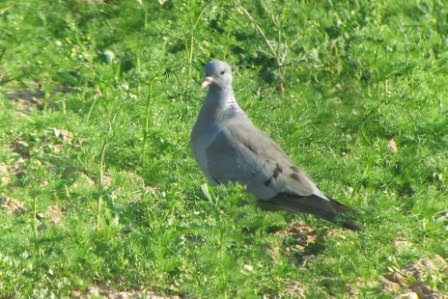 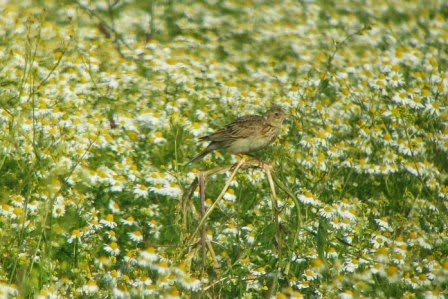 Friday, 20th June: Dry with cloud and sunshine but a cooling easterly breeze on the coast, as we approach tomorrow's summer solstice. However we start today with further delightful pic's of yesterday's momentous events as the Black-winged Stilt family left their breeding pool to move out to a new life out on the mudflats..... 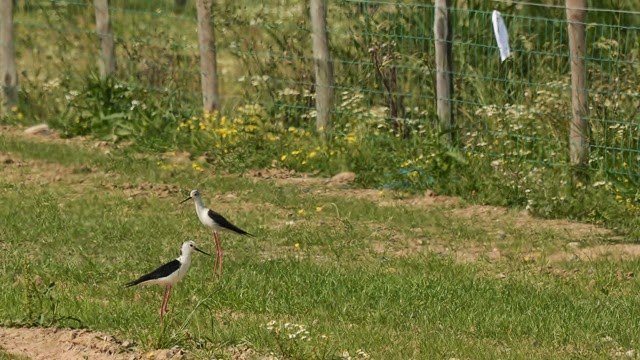 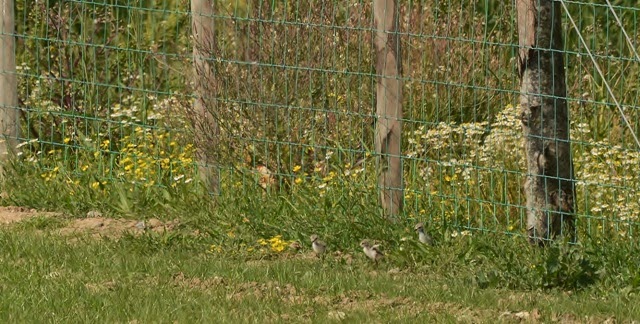 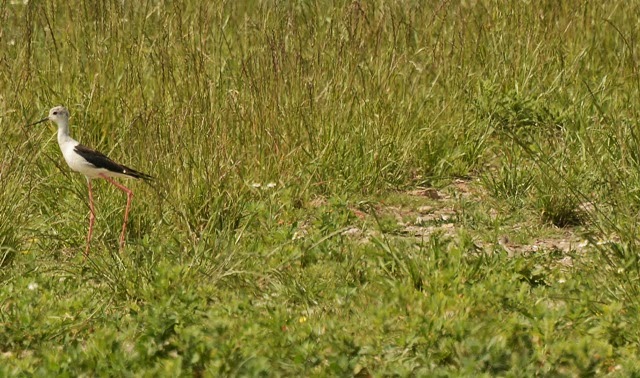 The Black-winged Stilt family on the move (19th June): from the top - 1. Mum and dad calling the chicks, 2. The moment the three chicks leave the breeding pool area and emerge from the boundary fence, 3. The chicks dash across the 'road' and 4. Parent with chick in the comparative safety of their new home (M. Davis).
Ferry Pool: A female Ruff was the only obviously new bird this morning, though Redshank numbers are increasing, too - 28, plus two very young chicks, which is encouraging. Otherwise 16 Black-tailed Godwits, 11 Avocet, 8 Teal, 3 Gadwall and 4 Lapwings were the sum. (AH) 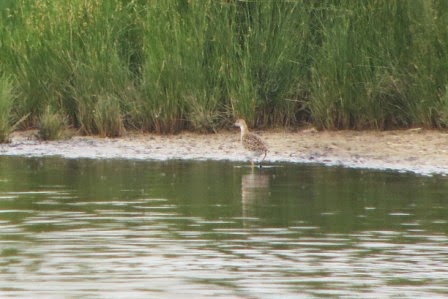 Ruff at the back of the Ferry (AH)
Church Norton: Definitely a feel of the midsummer doldrums today. Very few waders in the harbour, bar a dozen Curlew and a few Oystercatchers and Ringed Plovers, and a few Common Terns around the island. Along the Severals there were still a few singing Reed and Sedge Warblers, plus a family of Reed Buntings, and the Little Grebes still have two chicks. (AH) 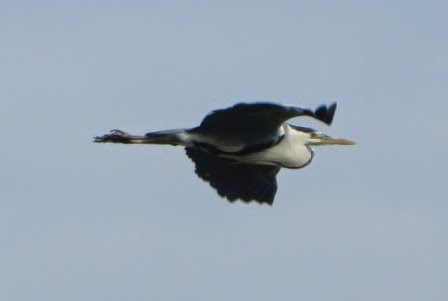 Grey Heron over (above), Little Grebe family and Reed Warbler on the Severals (AH) 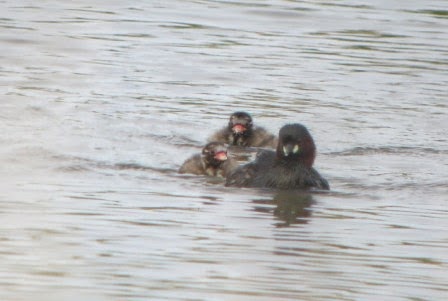 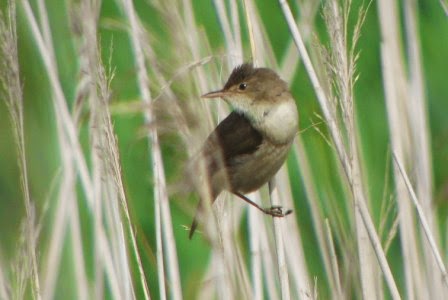 Medmerry: I managed distant 'scope views of both Black-winged Stilt parents this morning, although I had to walk along the beach almost to the breach in order to see them, they were just left of the two brick buildings in a creek infront of a shingle bank.  A corvid came too close for comfort and both parents, with the help of a couple of Lapwings, chased it way.  They were just as vocal as ever and I was glad to see them. Other highlights were two adult Kestrels with a juvenile, 3 Buzzards, a calling Cuckoo, 2 Yellowhammers, a family of Whitethroats, 1 Reed Bunting, 7+ Avocets with at least 3 still on nests, 5+ Little Ringed Plovers, 1 juvenile White Wagtail, 22 Black-tailed Godwits near the breach along with 1 Gadwall and 2 Common Terns, c15 Grey Plover and 9 Dunlin.  Looking across the breach I could see a courting pair of Great Crested Grebes, one being offered a nice piece of seaweed. Also 2 Brown Hares and a Clouded Yellow butterfly seen. (SR).

West Sands - breach: The Common Scoter flock was still off Coastguards at mid-day, probably c.100 birds. A Little Tern was on/over the pool near the breach at Medmerry with Sandwich Terns feeding offshore, and a couple of handsome summer plumaged male Grey Plovers were in with the other waders. (BI)

Thursday, 19th June: Sunny, dry and quite warm with light winds and high pressure dominating - after a foggy start on the peninsula -  and a forecast of similar weather through to the end of the weekend....
Medmerry: The big news came from the Stilt watch crew....... the Black-winged Stilt parents were seen to escort their 3 chicks safely over the causeway (past the obs hut) and across well onto the mudflats on the east side. It therefore seems likely that the guard duties carried out by all of us may be coming to an end, but we await an official announcement on that (thanks to C&ME). UPDATE: Just heard that the Stilt watch has now been stood down as from tomorrow (thanks to SR). (OM). And a further update from S&SaH, who report that the adults could be seen out in the middle, to the west of the old brick building, still seeing off all-comers, but the vegetation was too thick to spot the chicks. Also a few Lapwings were joining them in seeing off the crows, plus 7 Black-tailed Godwits and 13 Little Egrets in the area. 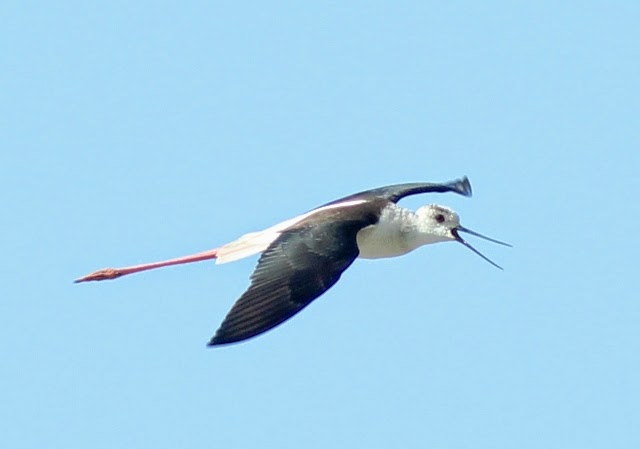 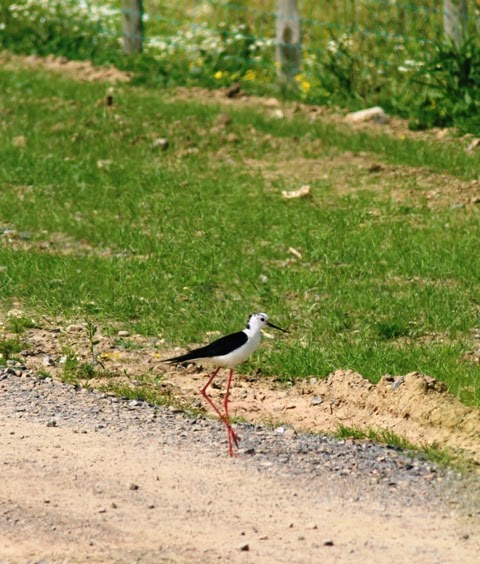 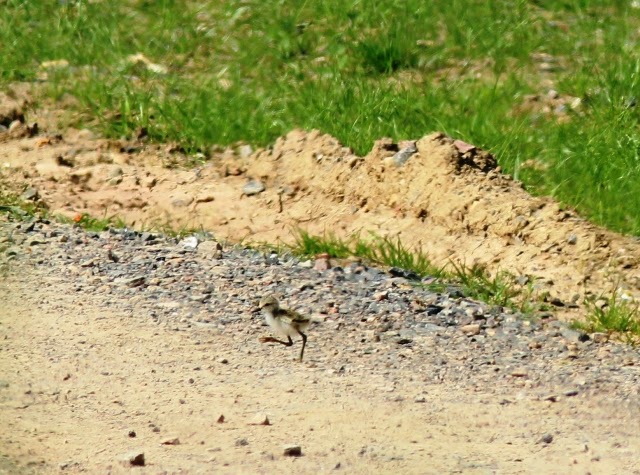 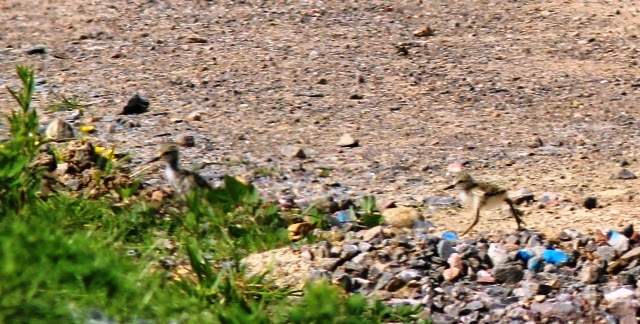 How does a Stilt family cross the road? 1. An adult flies up calling the family... 2. Adult stands guard watching for threats whilst continually calling the young... 3. The first of the young makes a dash for it, and 4. the other two chicks get up the courage to follow and reach the safety of the far bank. Wonderful. (C. Eames)
Medmerry: West Sands - There were around 50 Grey Plovers this morning in the pools, along with single Knot and Bar-tailed Godwit, 12 Dunlin, 8 Turnstone and a pair each of Little and Common Tern. Several Sandwich Terns were toing and froing offshore and around the rubble heaps a Corn Bunting , two or three singing Skylarks and half a dozen Linnets. Offshore from the Coastguard station there were a female Eider and around 60 Common Scoter. (AH) 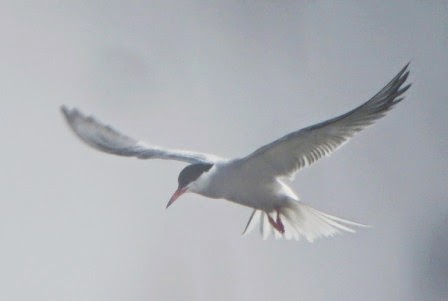 Common Tern (above), Skylark and Eider at Medmerry (AH) 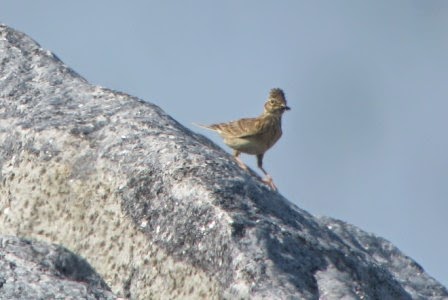 Ferry Pool: There were 3 Green Sandpipers at the back again this morning. Also present were 2 Black-tailed Godwits, 24 Redshank, 10 Avocets, 2 Lapwing, 6 Teal and the big group of young Shelducks, and a Red-legged Partridge sat on the building material by the pump-house. (AH) 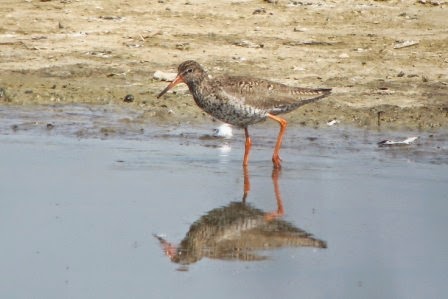 Redshank (above), Avocet, Shelduck(ling) & Red-legged Partridge at the Ferry (AH) 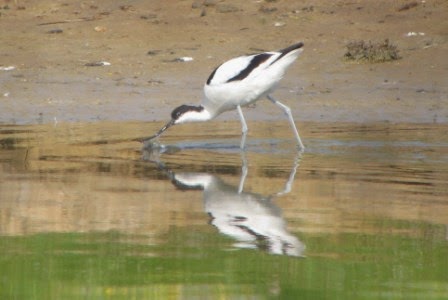 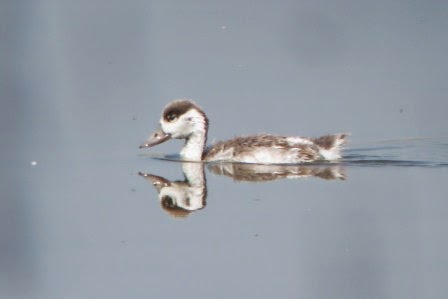 Pagham Hbr: On my ride to the harbour and return 1030-1300hrs the following was observed: Honer Lane:  Chiffchaff, Blackcap & 2 Yellowhammer males; over Honer Res: 6 Sand Martin, 3 Swift and a Buzzard; Footbridge nr the Sewage Farm: Emperor and Four-spot Chaser dragonflies; North Wall: Reed Bunting and a few Sedge and Reed Warblers singing, and  near the Paddyfield site on the lower path a stunning Orchid (Southern Marsh ?); Halsey’s Farm: Chiffchaff and Blackcap. Ferry Pool: 9 Avocet; Marsh Farm: 2 Buzzard and another Yellowhammer, Runcton: a Jay, and also a Coal Tit in my garden! (CRJ).
Posted by Birderowen at 09:14