Friday, 16th January: A gloomy, very wet and miserable morning with the rain predicted to last until early afternoon and variable winds gradually going round to a cool NW - not the most exciting prospects for today then! Yesterday's technical difficulties for both editors were probably the worst we've experienced so far and almost caused us to miss our daily report - ironically on the very day our page views passed the 200,000 mark, this event almost going unnoticed due to our other concerns! Many thanks to all those who follow or make use of our little blog, though it may be a few days until we get back to normal (and I'll be a hundred quid lighter by then!} (OM) Update: Although I'm now a bit poorer my pc is thankfully back in action....... please note my new email address for the blog is as follows: birderowen@hotmail.com and this now appears on our title page. Meanwhile things still aren't back to normal yet as AH is having technical problems with Blogger and cannot load any photos, but we're working on it (the blind leading the blind!) (OM)

North Wall: Tufted Duck (15) was the most numerous bird on the Breach Pool, though there were 200+ Wigeon and 80 Curlew on the fields behind. In White's Creek there was a Spotted Redshank, a Kingfisher, a Rock Pipit and seven displaying Red-breasted Mergansers, whilst a flock of c200 Black-tailed Godwits flew about before settling in the harbour. (AH) 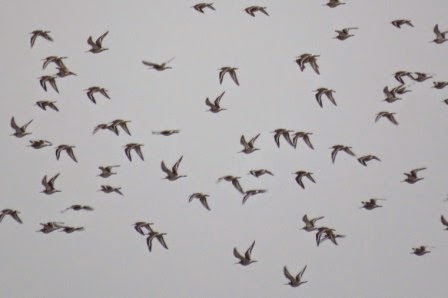 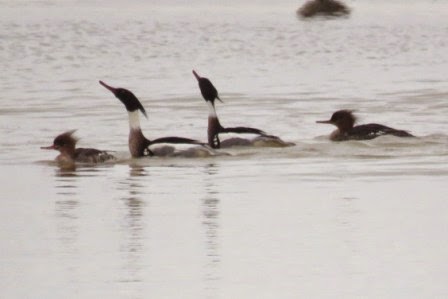 Pagham Lagoon: There were four female Goldeneyes on the water this morning, plug six Pochard, 40 Little Grebe and similar of Tufted Duck. (AH) 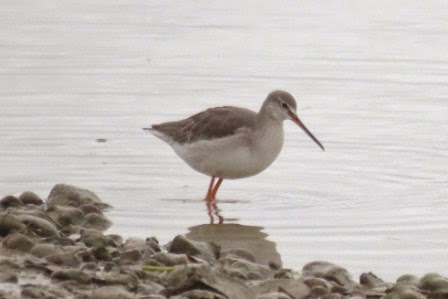 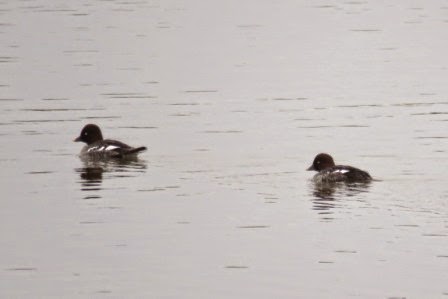 Chi GPs: There were two Kingfishers and a pair of displaying Great Crested Grebes around the Triangle Lake, but no sign of the Red-crested Pochard. (AB)
East Head: The three Spoonbills were roosting in Snowhill Creek and there was an Eider offshore this morning. (AB)
Medmerry: Breach - There were three Spoonbills in the pools by the breach early afternoon, and a Short-eared Owl along the track to Chainbridge Field . (PS)

A walk from Coastguard Station to Breach Viewpoint via the caravan site. At the crazy golf a male Stonechat with a Kestrel devouring a small rodent nearby, a Kingfisher along the rife running alongside the fun fair, and a Little Egret.

Construction work at what was previously the rough ground behind the viewpoint is progressing fast. Looking on the bright side, the rows of boulders with their large gaps should continue to prove popular with migrants. At the viewpoint was a Stonechat, one of the Short-eared Owls was hunting over the stubble fields, as was a Kestrel.

Ongoing works at Medmerry for yet more caravans, on the rough area that has previously been so good for migrants.... progress! (SR)


Chainbridge Field to Ham - The Short-eared Owl was still present later on, and the three Spoonbills were out in the main channel in the middle of the reserve, only viewable when they briefly came up the bank.


There were at least a dozen Skylarks and half a dozen each of Reed Bunting, Meadow Pipit and Linnet along the banks, eight Stock Doves went over, and the Southern Pochard was still in residence. (AH)

Thursday, 15th January: A wild and stormy night with SW gales and rain, though by morning the wind had eased somewhat and the prospects for the day ahead look somewhat better, with the promise of sunshine and showers.
Meanwhile, sorry to burden readers with admin matters, but I need to make you aware of my continuing computer problems. I am currently writing this on my old computer - complete with defective keyboard and sticky keys - but last night the hackers finally got me and my new machine has frozen and awaits attention. It is clear that my current email address (owen.birder@btinternet.com} has become an easy target so I plan to phase it out forthwith and use a new address. Meanwhile AH will be monitoring the incoming emails from contributors and I apologise if you have recently sent me stuff that I cannot access. I hope to be back to normal as soon as possible and thanks for your patience (OM)
And talking of patience - apologies for the late start but we have been without electricity for most of the day in Sidlesham. And, for whatever reason, I cannot upload photos.... (AH)

Selsey Bill: Sum total in thirty minutes between 8.30 and 9am was three Great Northern Divers, one Eider and three Red-breasted Mergansers on the sea, with two of the latter species going west. And nothing else! (AH)
Medmerry: Easton Lane - There were thirty Fieldfares in one of the arable fields by Easton Farm this morning. (PH)
Chainbridge Field - The Barn Owl is still hiding from me but one of the Short-eared Owls was hunting low over the field. There were also c250 Brent Geese, 122 Jackdaws, 2 Grey Herons, a Little Egret, 3 Meadow Pipits, and a flock of 20 or so Grey Plover flew over. (SR)

Chichester Gravel Pits: The Red-crested Pochard was still on Triangle Lake, and nearby there was a Cetti's Warbler and a Kingfisher. (C&ME)

North Wall: A very blustery SSW wind along a deserted North Wall. There were 5 Red-breasted Mergansers and 54 Wigeon along an otherwise deserted White's Creek. There were 2 Stonechats at the back of the horse field at Welbourne. The Breach Pool was overflowing and held just a few Teal and Mallard.
Honer Fields 1 and 2 are beginning to flood but the former held 460 Wigeon, 74 Curlew, 21 Black-tailed Godwits and 31 Moorhen. The flooded field north of the stables held 900 Lapwing. 4 Roe Deer were sheltering under the hedge in Honer 2 field. The field between the North Wall and Halsey's Farm held 290 Wigeon and 600 Lapwing. The field due west of Bremere bridge had a flock of 66 Canada Geese, 2 Greylag and the Tundra Bean Goose. Towards Marsh Farm were another 450 Wigeon and 70 Curlew. The Brent Geese were in fields NW of Marsh Farm. I only saw them when they took to the air and estimated at least 2000. (JDW)

Church Norton: Not a lot to report, though a Peregrine put up a huge flock of Lapwing - c2000, over the north end of the harbour, there was a Red-breasted Mreganser near Tern Island, 200 Knot on the mud and three Goldcrests at the botoom of the lane to the harbour. (AH)
Wednesday, 14th January: A bright cold day with a blasting north-westerly and the possibility of occasional wintry showers, but also sunny periods. Can I please make mention of the need for record submissions to now be made for those scarcer species that require descriptions. A recent check of the Sussex Ornithological Society (SOS) website revealed an appeal from the Recorder for descriptions for a whole range of species seen last year... and many related to observations on the Peninsula! I'm sure all you regulars are in the process of compiling your notes (have you submitted that Pallas's yet Mr Janman!) but in case anyone has forgotten could they kindly get on with it and what better time to do it than during these long dark winter nights. With the new Peninsula year list underway we wouldn't want to have to delete some of last year's stuff for lack of a record submission. Sermon over, many thanks (OM). A late report received that the Dusky Warbler was still present yesterday - see below .......
Church Norton: Not much new in the very strong westerly wind - highlights were a Kingfisher whizzing over the bench, a drake Goldeneye in the harbour and a Stonechat on the beach. Otherwise, plenty of the regular waders in the harbour and a big flock of Greenfinches and Goldfinches around the feeder.
Also a visiting birder reported a Spoonbill and around 15 Avocets from the end of the Long Pool. (AH/C&ME/OM) 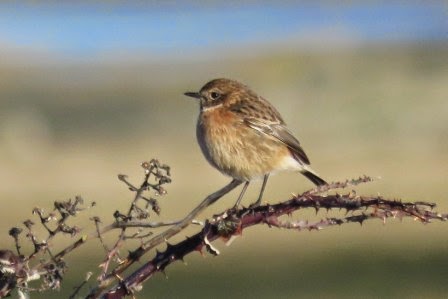 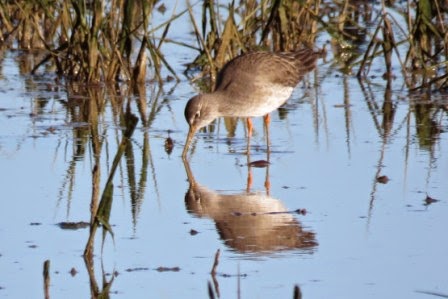 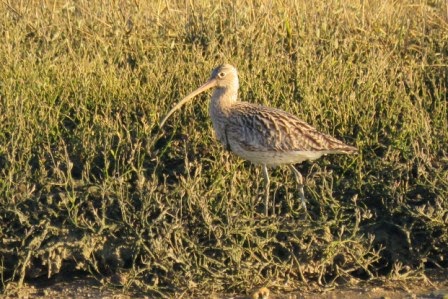 Some of the Lapwing flock over Ferry Field (AH)

Selsey (West): I went in search of something of interest at several sites, but it was all very mundane; the best I could find were a few Meadow Pipits, a Grey Wagtail and 14 Snipe! (OM). 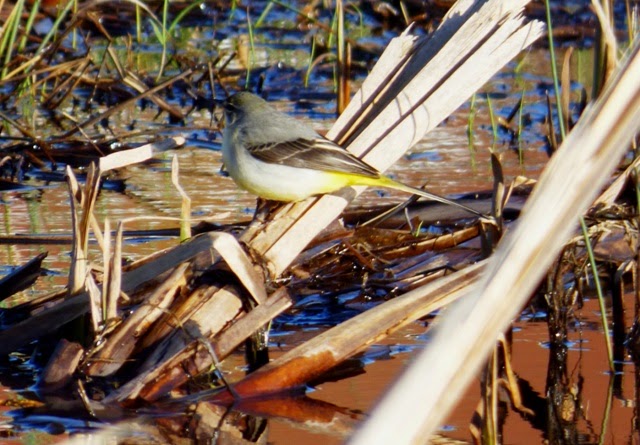 Grey Wagtail at Selsey (West) (OM)
Chichester GPs: No sign of the Red-crested Pochard, and no Dusky Warbler, though again it was apparently reported as present earlier. There were two Kingfishers and three Little Egrets on Triangle Lake. (AB) Further update.... a late report received that the Dusky Warbler was present yesterday afternoon (Tues 13/1)...." the Dusky Warbler was seen briefly at 1.44 and conclusively at 2.35 when it was also calling. Both times by the main path about halfway between the bungalow and the house. It was on the north side of the path part of the time during the second sighting and may be spending time working round that lake (Copse Lake?) or elsewhere, because apart from the calls at the time of the second sighting I didn't hear it once from 11.30 to 3.00." (Martin Daniel).
Snowhill Creek: No sign of the Spoonbills, though there were two Ruff, a Sanderling and a Sandwich Tern present. (AB)
The Spoonbills were, however, reported on the SOS (by Nicola Harvey) as present and showing well at some point during the day. (AH)
Posted by Birderowen at 08:09