Sunday, 25th January: A bright sunny start, before deteriorating into a grey and breezy day....


Chichester Marina (Birdham): The Black-necked Grebe reported on yesterday's WEBS survey (on the SOS) was still there this afternoon, just north of the marina and showing well. In addition there was a Kingfisher that flew along the canal. (IP)
Along the canal the single Black Swan was surviving in this chilly weather along with 13 Tufted Ducks, 23 Coot, 2 Mute Swans and assorted Mallard. The pond at Birdham Pool was full to overflowing and the path alongside no longer usable, there was very little here apart from a handful of Tufted Ducks and a sleeping Grey Heron. The sea was very busy with racing dinghies, 10 Little Grebes and a Great Crested was about it.
From the hide overlooking Apuldram Manor Marsh Farm a distant pale Buzzard was keeping watch, a good 80% cream coloured bird standing out against the trees. There was a calling Cetti's Warbler and a few Curlew, but otherwise very quiet with just a single Coot on the water. (SR) 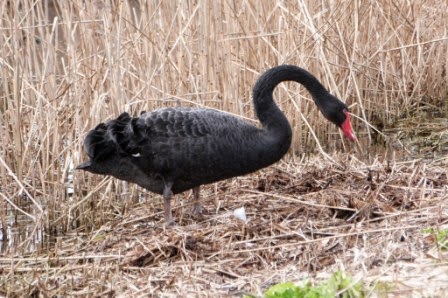 North Wall: A splendid male Marsh Harrier was quartering the reeds behind the Breach Pool this afternoon. The Canada Geese flock was still around, but there was no sign of the Tundra Bean Goose with them. (JDW)


Church Norton: A Great Northern Diver, and two Red-throated Divers went east offshore, and one of the latter west, and there were an encouraging 12 Slavonian Grebes on the sea along with a Great Crested Grebe and a pair of Red-breasted Mergansers.
There were at least 1000 Brent Geese in the harbour, a pair of Stonechats by the first Several and four Buzzards over the Priory.
The Green Sandpiper and Grey Wagtail were both present again at Park Farm, along with a Chiffchaff in Park Lane. (IP/S&SaH)
Fishbourne Creek: The wintering Whimbrel was along the near bank, a couple of Greenshank and Spotted Redshank were out in the channels, and at least 100 Black-tailed Godwit dropped in. Nine Goldeneye and at least a dozen Little and Great Crested Grebes were in the channel towards the marina, and there were four Gadwall and 30 Pintail amongst the Wigeon and Teal. A pair of Stonechats, a couple of Reed Buntings and Cetti's Warblers and three or four Rock Pipits were along the path, and a dozen Yellowhammer were around the stables. (AH/DM/RI) 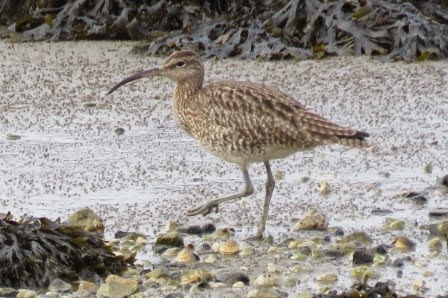 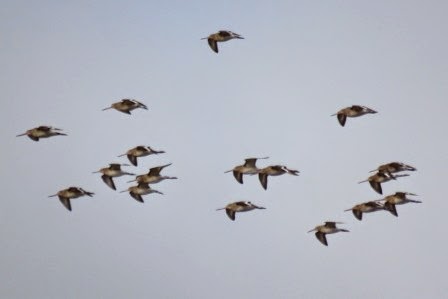 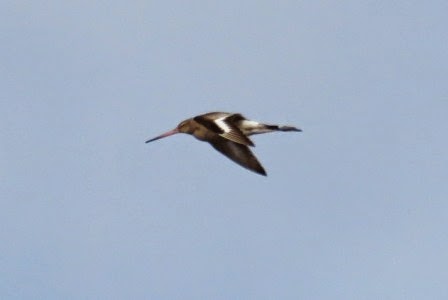 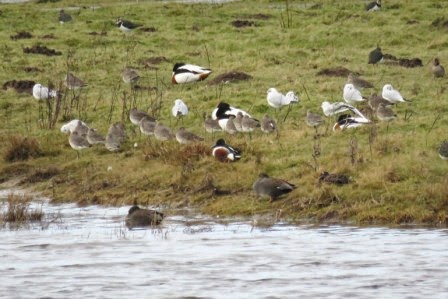 Gadwall, Shoveler, Shelduck and Black-tailed Godwits on the Ferry (AH)


Medmerry: Chainbridge Field - The two Short-eared Owls appeared from the bank at about 4.30, flew purposely off over the far hedge and never re-appeared! No sign of the Barn Owl either, though the Buzzard was on the hedge again and a Stonechat was near the bank. (AH/BI)

Easton Lane west - This afternoon there were two Stonechats, 24 Skylarks, a Green Sandpiper and five Reed Bunting from the banks, and there were also two Buzzards about, one of which was perched on the Barn at Marsh Farm to ensure that the Little Owl didn't show! (S&SaH)

Saturday, 24th January: Another bright, sunny and dry day, with a cool NW wind but not quite so cold as the last few days.........


East Head: The three Spoonbills were still asleep on Snowhill Creek, though there was no sign of the Dartford Warbler this morning. Also around the creek were a Kingfisher, a Water Rail, a Greenshank and a Spotted Redshank. (S&SaH) 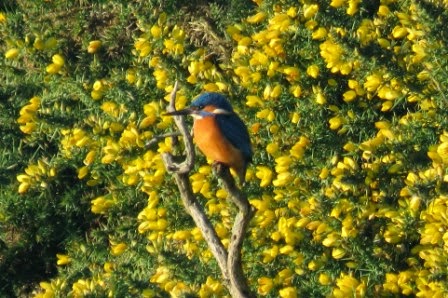 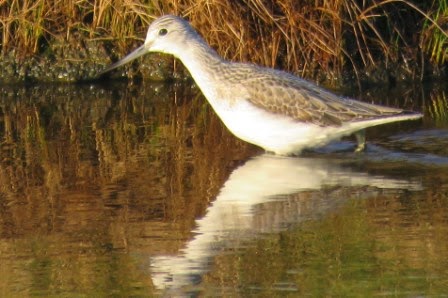 North Wall: The Tundra Bean Goose was present again on the Breach Pool this morning. (PC)


Church Norton: Quiet again - both Peregrines on the island a a drake Goldeneye in the harbour were the highlights. Also the Green Sandpiper was back on the Park Farm Reservoir.(IP/S&SaH) 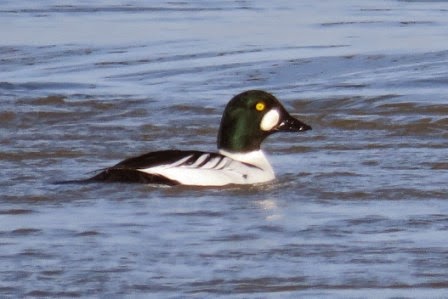 Goldeneye in the harbour (SH)


Ferry Pool/Long Pool: At least 1000 Lapwing and 100 Black-tailed Godwits on the field early this morning, along with 30 Curlews and 200 Wigeon, with 30 Shoveler, 15 Shelduck and 25 Teal around the edges of the pool.Just a Water Rail and a Reed Bunting along the Long Pool, plus a Spotted Redshank, 20 Redshank and five Grey Plovers in the channel. (AH) 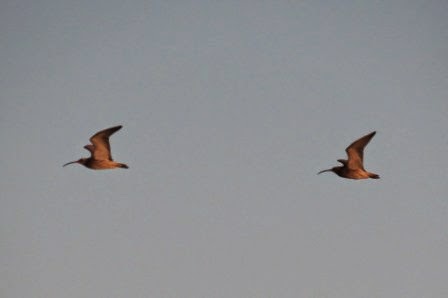 Curlews over (above) & Lapwings on Ferry Field (AH) 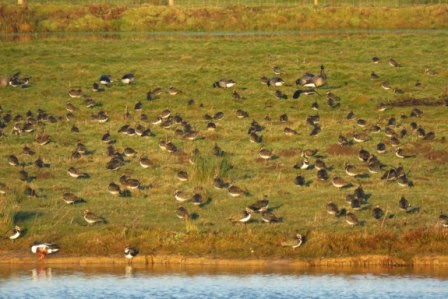 Medmerry: Chainbridge Field to Ham - The Barn Owl was hunting over the rough field this afternoon, and there were two Short-eared Owls, too, getting agitated with a Buzzard that settled on the hedge and was reluctant to budge.
Not much along the bank, though - just a few Skylarks, Linnets and Reed Buntings, a couple of hundred Brent Geese were in the arable fields and 200 Lapwing and a dozen Golden Plover went over into the reserve, as did a Buzzard. (AH) 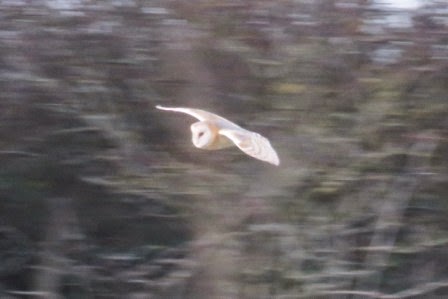 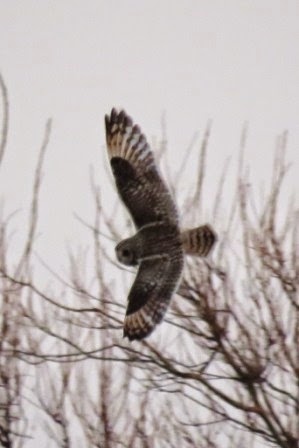 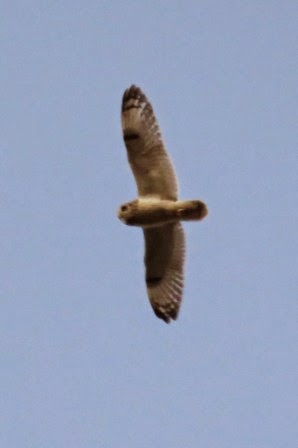 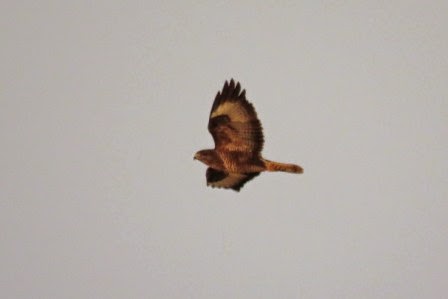 Friday, 23rd January: Another very cold morning with a heavy frost which was slow to clear, then dry, bright and sunny with a light E/SE wind.

East Head: There was a report of 15 Snow Buntings here yesterday , but no luck in tracking them down this morning. The three Spoonbills were still on Snowhill Creek, a Dartford Warbler was around the crabbing pool, and there were two Spotted Redshanks and a few Snipe also there. There were also a few Meadow Pipits and three Stonechats in the dunes. (BI)
There was also a female Common Scoter in the harbour and just one Sanderling on the beach. (AB) 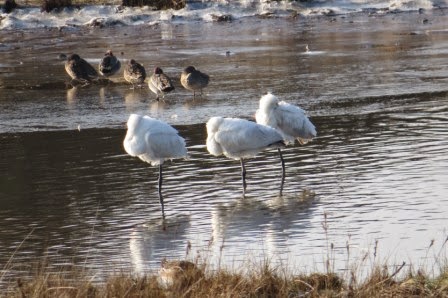 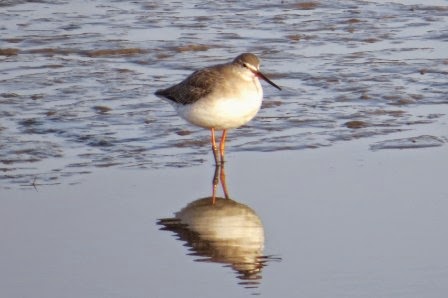 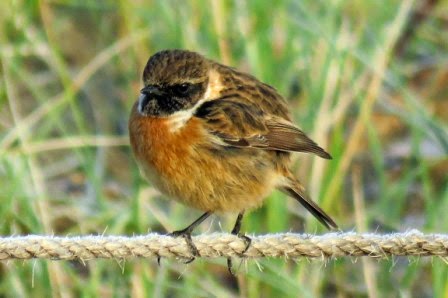 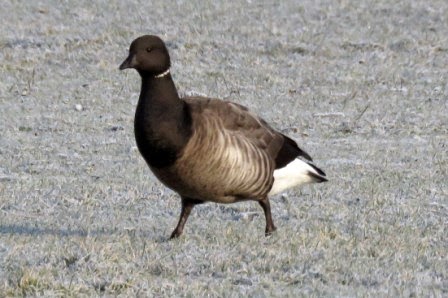 Pagham Lagoon: There were ten Goldeneye on the lagoon early morning, with quite a bit of displaying, and even a bit of mating going on! Not much else - there were still four Pochard and 30+ Tufted Duck and Little Grebe present. (AH) 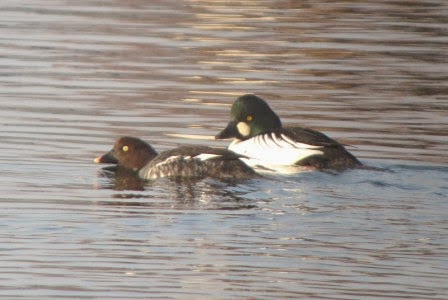 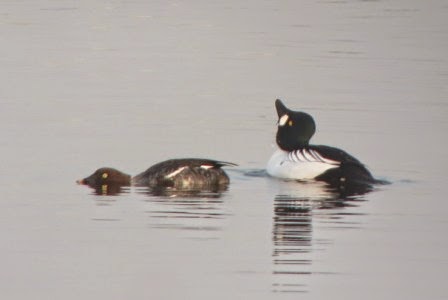 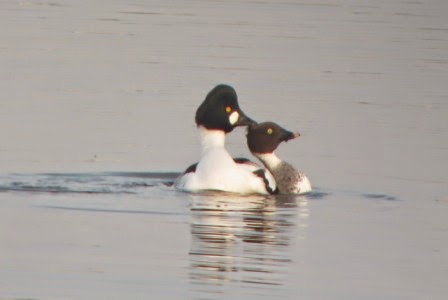 North Wall: The Tundra Bean Goose was showing nicely this morning on the Breach Pool, with about 40 Canada Geese and a few Wigeon and Teal. Two Water Rails put in a brief appearance, as did a Kingfisher and a Reed Bunting.


The Little Owl was tucked in at his usual site near the stables - only viewable from the car-parking area, and two Stonechats were in the horse field.


In the harbour there were 7 Red-breasted Mergansers, 30+ Pintail, 10 Black-tailed Godwits and huge numbers of Wigeon, Teal, Lapwing, Dunlin and Grey Plovers. (AH/JDW) 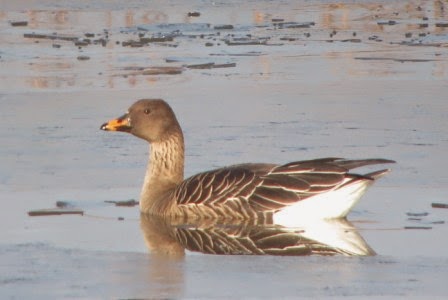 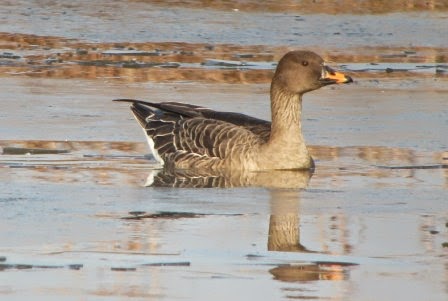 Tundra Bean Goose on the Breach Pool (AH above & JDW below) 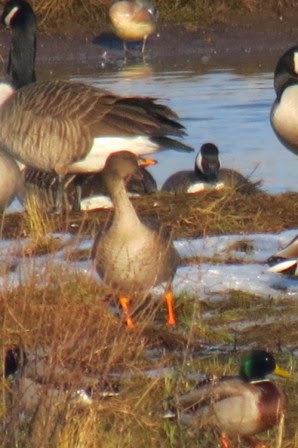 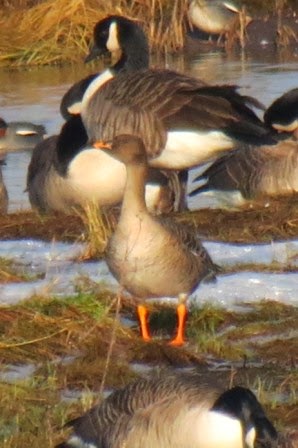 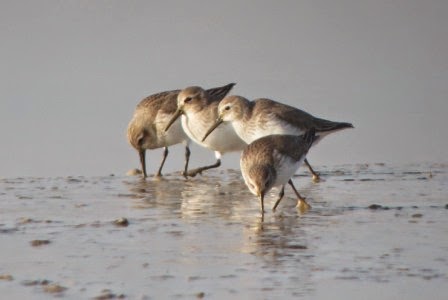 Medmerry: Ham Viewpoint - At midday the 3 Spoonbills were feeding in their usual spot, and also present were 11 Yellowhammers, c50 Skylarks overhead, c60 Stock Doves, 5 Meadow Pipits, 2 Stonechats, 3 Reed Buntings, 1 Redshank, c200 distant Brent Geese and 2 Buzzards. In the field behind the viewpoint were c100 Golden Plover and c80 Lapwing. The Southern Pochard was still on the long pool and showing nicely. (SR)
Posted by Birderowen at 10:25