Wednesday, 28th January: A cool, grey, wet and windy morning with a strong WSW wind force 6-7; conditions are set to brighten later but with the wind veering to a colder NW direction.... then it is predicted to get a lot colder by the weekend.

My thanks go to AH for keeping the blog running during my 3-day sojourn to Norfolk. During this time three of the regulars have put their heads above the parapet and forwarded their Peninsula and Selsey Bill list totals to me, following my comments on an earlier blog. If anyone else would like to be included please forward details.... though I should again clarify that only officially accepted records should be used. Yes I know it was an injustice that the Blue Rock Thrush was rejected and the Surf Scoter was also a valid shout, and observers are free to add what they like to their personal lists, but as neither was officially accepted they won't be included here in the published totals - sorry. Finally, I should add that it is not a competition - I just thought it might be a bit of fun to publish observers' list totals for general interest; it will be done entirely on trust and I'd anticipate those of us who have watched here longest (especially during the 'Pontins years') will have the largest list totals - we shall see - but meanwhile I await any further responses (OM).

Selsey Bill: I gave it half an hour, and literally the only birds past were seven Brent Geese that came from over the houses and disappeared west over the Bill House behind me. I gave up at that point!

Church Norton: Unsurprisingly, not much doing, though the strong westerly often brings some of the birds over to the west side of the harbour - and, as a case in point, there were four Pintail with the Wigeon and Teal in front of the hide. Otherwise, there were half a dozen Black-tailed Godwits and 100 Knot on the mud, along with 50+ Grey Plovers and Curlews and many hundreds of Dunlin. There were a few Goldcrests, Goldfinches and Greenfinches at the bottom of the path, but not much else. (AH) 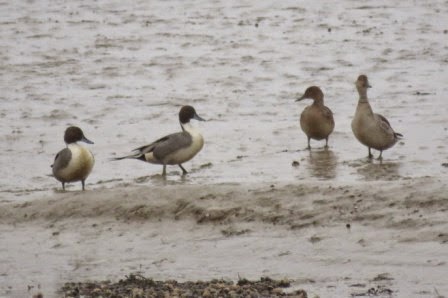 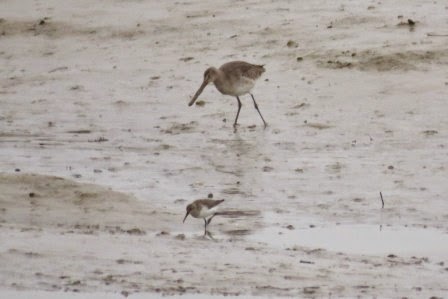 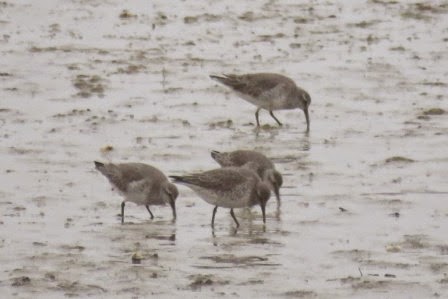 Tuesday, 27th January: Another grey morning, though less breezy, getting colder as it brightened.
Long Pool: The male Marsh Harrier was hunting over the harbour at 8am, before drifting away towards the Ferry, and what was presumably the Tundra Bean Goose - though all I could see was a darkish 'grey' goose with a lower, less harsh call than a Greylag - heading over towards the North Wall area.
Otherwise pickings were thin - plenty of Redshank and Teal, plus a few Grey Plovers in the channel, no passerines to speak of at all, and several hundred Brent Geese and a single Goldeneye in the main channel. (AH) 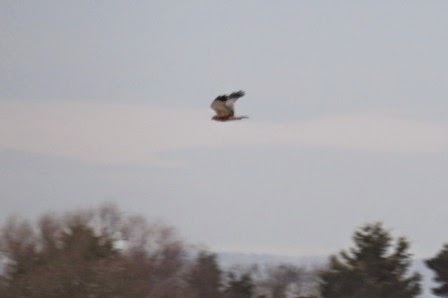 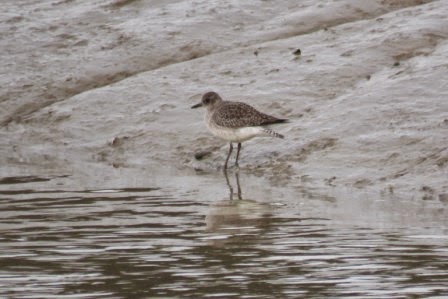 Ferry Pool: Still many hundreds of Lapwing on the field, and the regular Shoveler, Teal, Wigeon and Shelduck around the pool, plus four Tufted Ducks. It is surprising just how much diving some of the Shovelers do, disappearing under water for 20-30 seconds at a time, and coming up with clumps of vegetation, whilst others seem content to filter-feed on the surface. (AH)

Medmerry: There were two (ringed) Spoonbills on the Stilt Pool this morning at 9.30, and a Raven went over Marsh Barn. (PS)

Chainbridge Field - Late this afternoon the Barn Owl was showing extremely well, and there was a single Short-eared Owl present as well. (PS)

North Wall: The Church Lane Little Owl was in view until it retreated in the face of 7 Magpies. A Spotted Redshank and a Little Grebe were in Whites Creek along with a few Redshank and Black-tailed Godwits. The main occupants of the Creek were Wigeon and Teal, and 700 Lapwing were roosting nearby. Very little activity on Breach Pool, just small numbers of Mallard, Teal and Wigeon, the latter were regularly coming in for a wash and brush up.


Brent Geese were again moving in large numbers to fields north of Marsh Farm. I tracked a huge flock down and estimated there were in the region of 2500 geese. At this point they were disturbed and many flew back to the harbour. A large group then settled in the large field east of Marsh Farm and I counted 1800. Back on the Wall I counted a further 1400 geese in the harbour, which would give a total of well over 3000. (JDW) 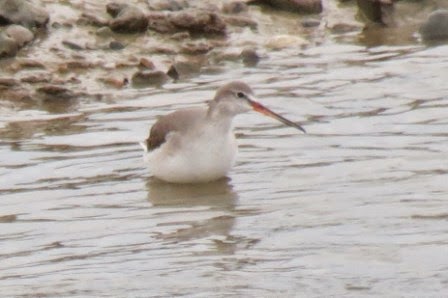 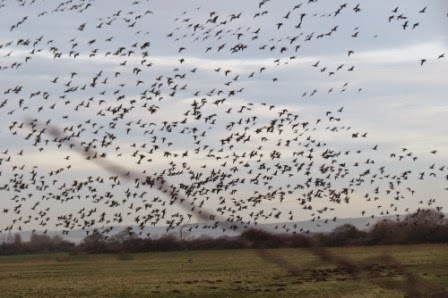 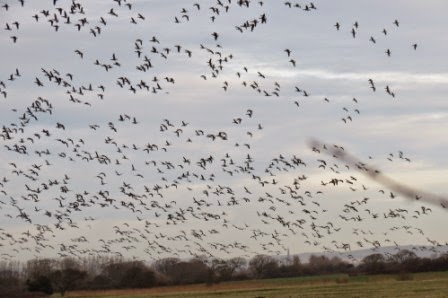 South Mundham: There were 32 Mute Swan, 7 Stock Dove, a Kestrel and a Mistle Thrush present. (CRJ)


Honer Reservoir: There were 13 Coot, 27 Black-headed Gull, a Grey Wagtail and a Stonechat around the reservoir today. (CRJ)
Marsh Farm, Sidlesham:  There were 47 Curlew, a Buzzard, 3 Stock Dove and 3 Stonechat present today. (CRJ)

Monday, 26th January: A grey and breezy morning, brightening up slowly as the day progressed...

Selsey Bill: Between 8-8.30am, nothing moved bar four Red-breasted Mergansers east and a Mediterranean Gull west, though there were a pair of the former on the sea along with three Great Northern Divers. (AH) 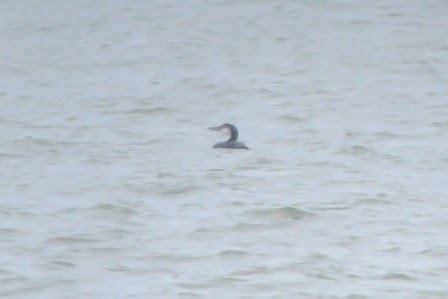 Great Northern Diver off the Bill (AH)
Church Norton: A surprise this morning in the form of a singing Coal Tit in the birches at the bottom of the path to the harbour. Annoyingly, no sooner had I got the binoculars on it than a Wood Pigeon decided to crash-land in the tree and spook it. I heard it singing again briefly in the edge of the wood but I couldn't relocate it.


Otherwise it as very quiet - the Peregrine flew across the harbour to settle on its island, a Jay was in the churchyard, a couple of Red-breasted Mergansers were offshore, and I found two or three Goldcrests as I looked for the Coal Tit. (AH)

Medmerry: There was a Firecrest in the hedges along Ham Lane this morning, and the three Spoonbills were viewable from the Ham Viewpoint later on.(PH)

Chainbridge Field: There vwere three short-eared Owls present this afternoon between 3.30 and 4.00pm, and a possible Jack Snipe was flushed nearby. (CRJ) 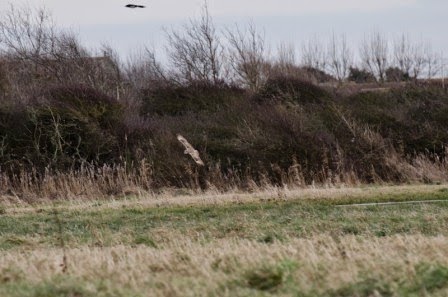 Short-eared Owl at Chainbridge Field (CRJ)
Chichester Marina: I had a good look for the Black-necked Grebe without success this morning, though there were at least 40 Little Grebes along the channel, along with 8 Goldeneye, 15 Great Crested Grebes and 35 Red-breasted Mergansers. (AH) 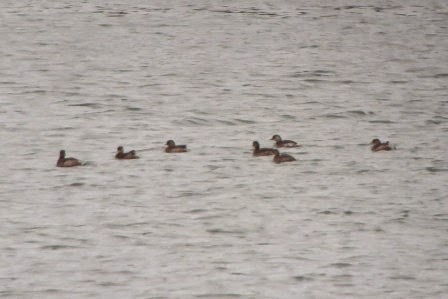 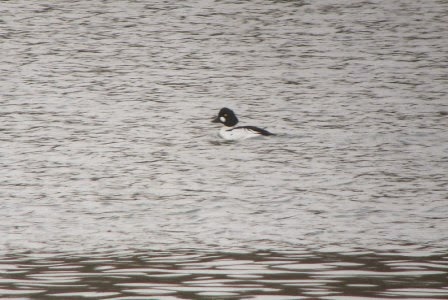 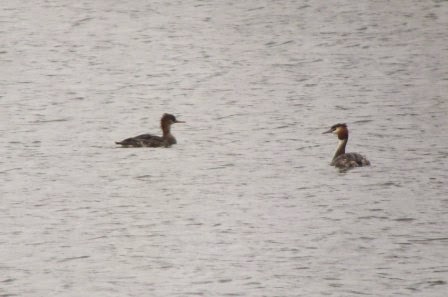 North Wall: A quiet, mild morning. Apart from Lapwing there were no waders at all in or around White's Creek, just Wigeon and Teal, most of whom appeared to be asleep. There were just a few Mallard, Wigeon, Teal and Tufted ducks on Breach Pool, with small groups of Curlew in the fields behind the Wall. 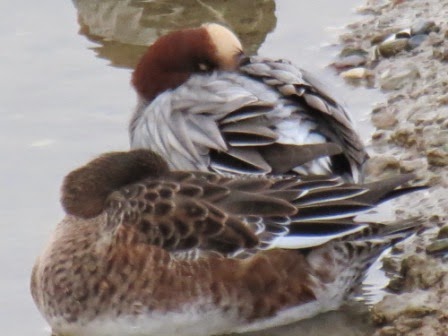 
Honer Farm area: On the reservoir at Honer there were 15 Coot, 4 Tufted Ducks, 3 Little Grebes and 2 Mute Swans. There were 14 Reed Buntings feeding in the field to the east of the reservoir and 2 Stock Doves at Honer Farm. Brent geese were flying NW from the harbour and appeared to be settling above Marsh Farm, and there were 2 Kestrels and 2 Buzzards in the same area. (JDW) 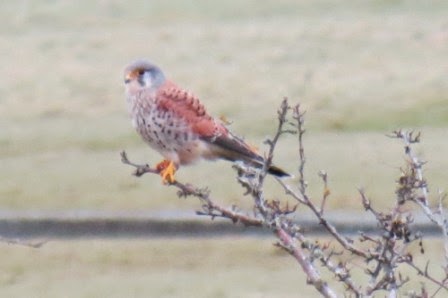 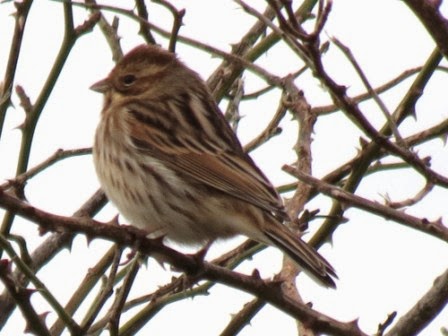 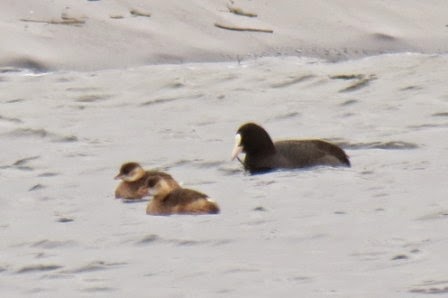