Bank Holiday Monday, 6th April: An uncharacteristically nice day for a Bank Holiday, with bright sunshine and a light-moderate WNW breeze after a cold, frosty and misty start... 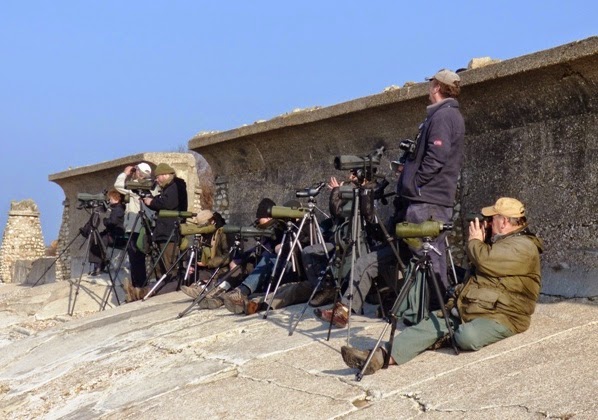 The spring-like weather brought out the first proper gathering on the Wall; shame that the sea-passage didn't match the enthusiasm! (OM) 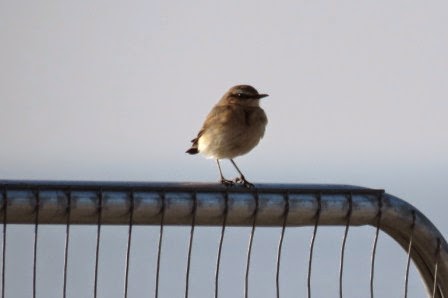 Wheatear (above), Brent Geese & Wren at the Bill (AH) 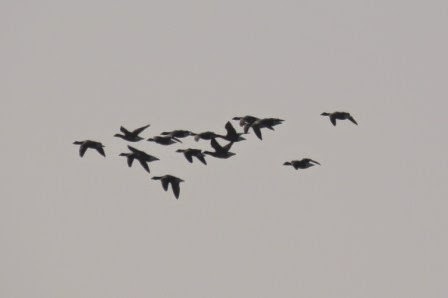 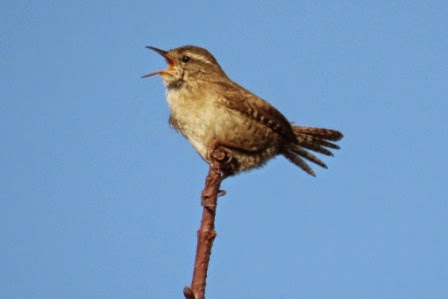 Selsey (West): A check of several sites was fairly unproductive, the only noteworthy sightings being a dozen Snipe and a pair of Long-tailed Tits on the private marsh and a pair of Red-legged Partridges in the horse paddocks, plus a smattering of Chiffchaffs. (OM)

Selsey Town: Two Red Kites went high over the north of the town this morning. (SaH)

Church Norton: There was a good fall of Wheatears along the spit, with at least 20 present at 11am, and still over a dozen an hour later, though few other migrants were noted, bar a few Chiffchaffs and a Swallow. There were five Brent Geese still in the harbour, along with 30+ Dunlin and 50+ Curlews. (IP/AH)
The pair of Swallows were back at Park Farm stables this morning, and there were three Willow Warblers, 10+ Chiffchaffs and three more Swallows on the route to Church Norton. (S&SaH) 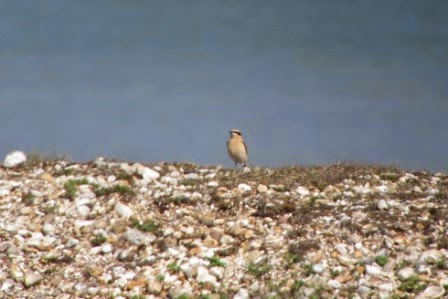 
Ferry Pool: At 08.45 there were ca.250 Black-tailed Godwits roosting/loafing/preening at the far end, plus a Snipe, an Avocet, 10 Redshank, 56 Shoveler, 14 Teal, 4 Gadwall, 15 Shelduck and 7 Wigeon. Also earlier on, there were 5 Knot in amongst the Godwits - comparatively unusual here (AH/PH). 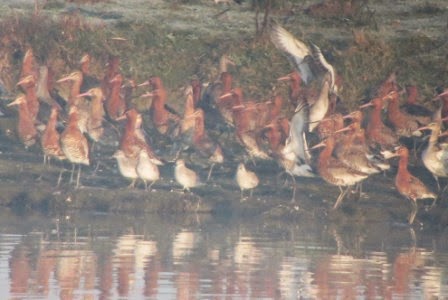 Knot and Black-tailed Godwit on the Ferry (AH)
Long Pool: There were five or six Yellowhammers along the path this morning. They used to be regular along the west side of the harbour, but have more or less abandoned it in recent years, so hopefully these may be colonists from nearby Medmerry. Otherwise, one (and probably two) Willow Warblers were singing infrequently, plenty of Chiffchaffs were along the hedges, up to 30 Linnets were along the gorse and a few Reed Buntings were also present. (AH/BI) 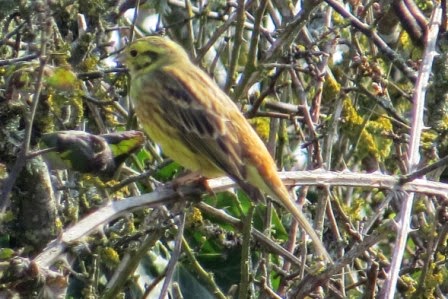 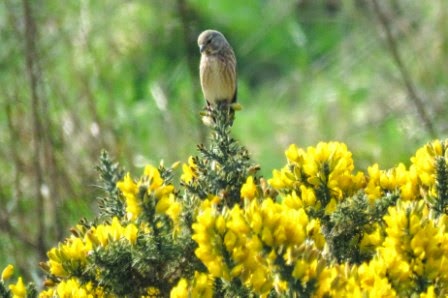 Chichester Marina: Unfortunately the place was rammed with tourists and visitors, parking spaces were at a premium and there were far more people than birds. On the marsh little to report except 8 Tufted Ducks, a few Teal, a pair of Canada Geese and a couple of pairs of Lapwing; also a couple of competing Cetti's Warblers there and several Chiffchaffs (OM).


Medmerry: Porthole Farm to Ham Farm - There were half a dozen Sand Martins and a dozen Swallows over the sewage works this afternoon, and every bush seemed to hold a Chiffchaff, but there wasn't much other evidence of migration.
A Short-eared Owl went over from Chainbridge area towards the Ferry, the regular pair of Buzzards and three or four pairs of Stock Doves were in residence, and at least ten pairs of Lapwings were spread out across the cropped fields. There were Linnets and Reed Buntings along the hedges, a single Corn Bunting at Ham Farm and at least half a dozen Yellowhammers along Ham Lane. (AH) 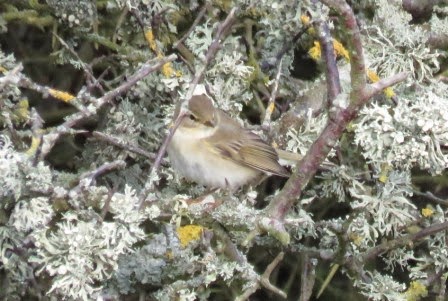 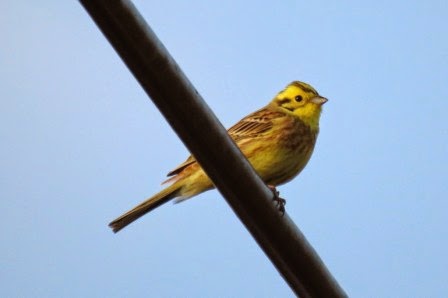 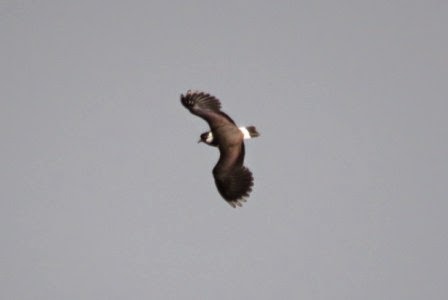 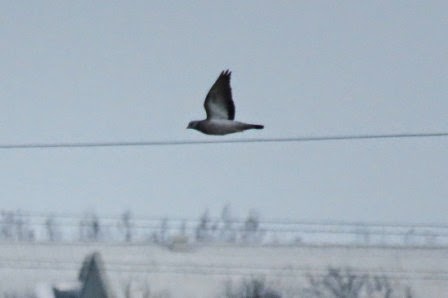 Easter Sunday, 5th April: A promising-looking day; dry, cloudy with some hints of brightness and at last a light E/SE breeze - with high pressure building and a clear run up from Biscay for potential migrants. It's not the sort of day then when you would expect both editors to be away from the Peninsula, but for different reasons it appears that's the way it will be - so we'll both be expecting that rarity call at anytime....!

Church Norton: Two Grey Partridges at the rear of the Severals, 5 Buzzards in the area, a Common and 2 Sandwich Terns in the harbour; also 1 Red-breasted Merganser, 4 Brent Geese, 6 Pintail and 2 Great Crested Grebes, plus several Chiffchaffs in the area (SaSH)
Medmerry: a few Swallows, two Wheatears and the colour-ringed Spoonbill, three or maybe four Little Ringed Plovers and 19 Avocets on the stilt pool. An errant mountain biker at the the back of the pool put up a Short-eared Owl which did a lap of the pool and landed by the near fence only to be put up again a few moments later by a young lad throwing stones. It returned to the back of the pool for a well needed rest! (BI/PH) 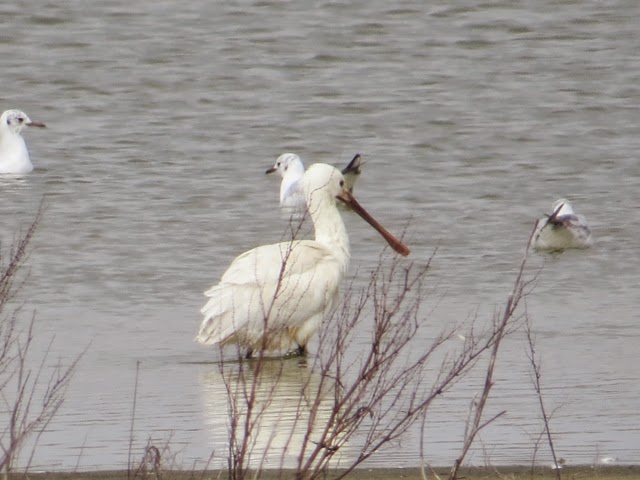 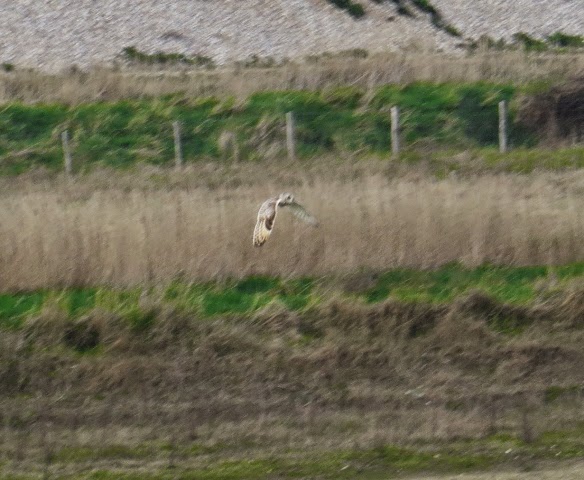 Saturday, 4th April: Mainly cloudy and dry with some brighter periods, but with the wind having swung round to the N/NE... 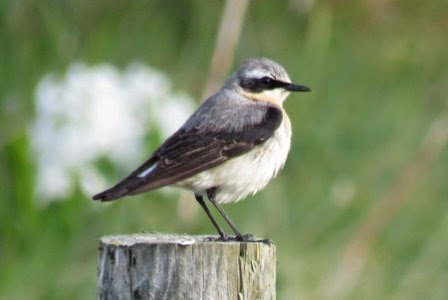 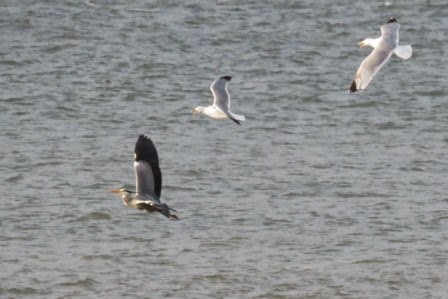 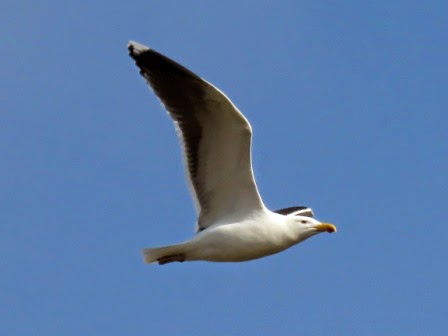 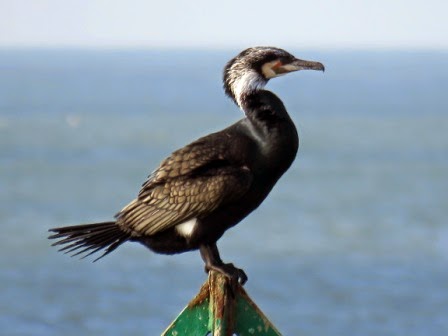 Medmerry: Easton Lane west - Four Redwings flew from the poplars this morning, and on the return leg, two hours later, a single Redwing was in the small trees and scrub on the other side of the field from the poplars. (GT)
Ham - A Short-eared Owl was over the centre of the reserve and there were also 2 Kestrels, 5 male Wheatears in the ploughed field, 2 singing Corn Buntings, 3 Brent Geese, 17 Dunlin, 22 Grey Plover and plenty of singing Skylarks. (SR)
Porthole Farm area - This afternoon there were 20+ Swallows over the sewage works, and a Common Sandpiper flew overhead calling en route from Ferry Pool towards Ham. (C&JM/C&ME)
Chichester GPs: Ivy Lake complex - This morning, when the cloud came down, there were c20 Sand Martins, c10 Swallows and at least a couple of House Martins. There were also two Blackcaps singing in Peckhams Copse Lane. (AB/PB)
At 4pm this afternoon there were 20 Swallows and 5 Sand Martins over Peckham’s Copse Lake, and 5 House Martins and a few Swallows over the western end of Ivy Lake. (CRJ) 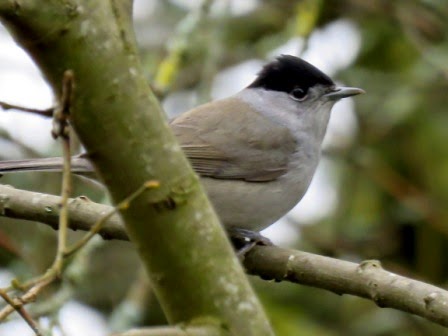 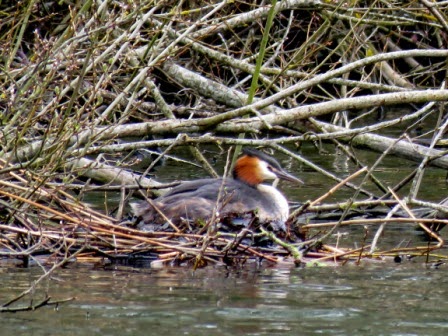 Church Norton: A Short-eared Owl flew off the spit and over onto Tern Island at about 9.30am. Not much else was about - a single Common Tern went east offshore, a Gannet was offshore (seen from the hide!), and eight Red-breasted Mergansers and two Great Crested Grebes were on the sea.
A Mistle Thrush was in the pines in the car-park (they have become very scarce here in recent times), but the only migrants on show were Chiffchaffs singing from a variety of locations. (AH/AB/PB)
This morning there was also a Willow Warbler and a Firecrest in the Oak Copse, and seven Wheatears on the beach near the Severals. (C&JM/C&ME)
This afternoon there were 12 Wheatears together in the field west of Park Farm, Selsey. (IP) 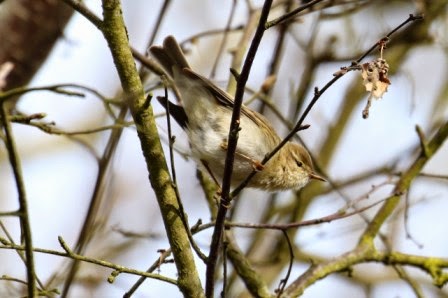 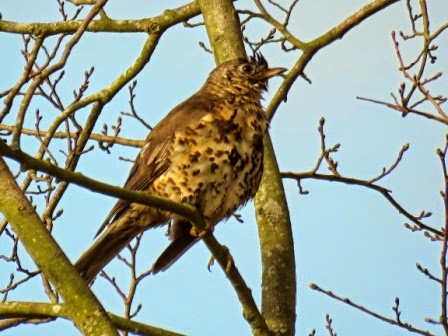 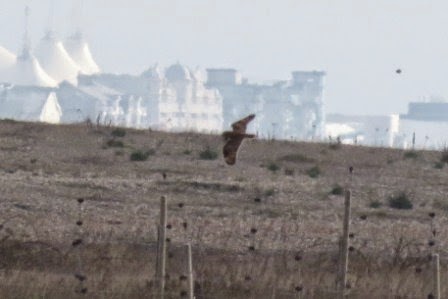 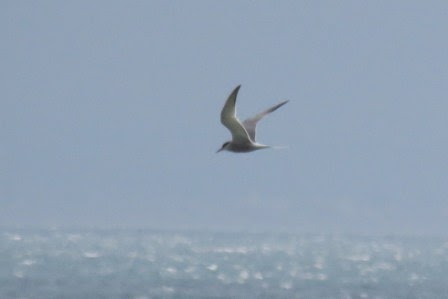 Ferry Pool: Just one Avocet on the pool this morning, along with c170 Black-tailed Godwits, 60+ Shoveler, c20 Wigeon and up to ten pairs of Lapwing. (AH/AB/PB/C&ME/C&JM)
A Swallow went north over Compton's Farm at 11.30am (IP) 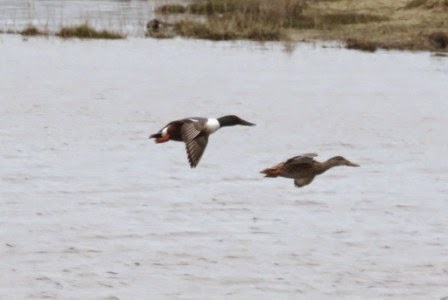 Shovelers over the Ferry (AH)

Lagness (nr Pagham): There were a pair of Mistle Thrushes in the pine trees opposite the Royal Oak pub, on B2166 at midday today. (AH)
Posted by Birderowen at 07:55