Sunday, 21st February: A generally dull and grey day with a fresh to strong WSW wind; mainly dry but with the chance of some drizzle or the odd shower...... 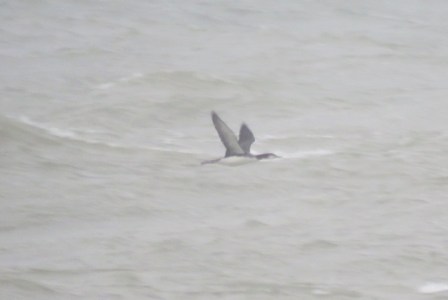 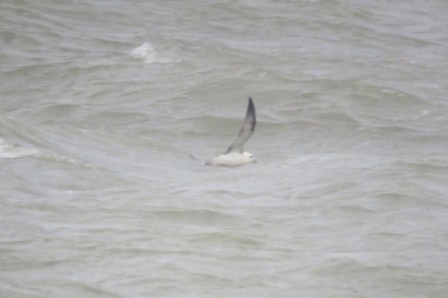 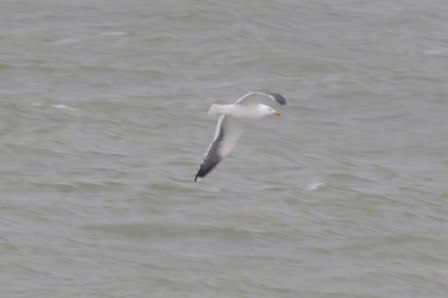 Church Norton: Just about the only place to seek some refuge from the wind! Among birds seen on the high tide were the Whimbrel and plenty of Wigeon, Teal, Redshank and Curlew around the bench area, and from along the west side of the harbour - mostly seen when they all took flight -  there were half a dozen Pintail, the 'leucistic' Curlew, 40 Avocets, 200+ Golden Plover among the 1000+ Lapwing, 100+ Knot, 80+ Black-tailed Godwit and several hundred Dunlin and 100+ Grey Plover.
On the landward side there was a Chiffchaff and a Goldcrest along the sheltered hedges, a couple of Reed Buntings and a handful of Meadow Pipits, and eight Stock Doves and up to ten Mediterranean Gulls among the Black-headed Gulls on the ploughed fields. (AH/IP/CN) 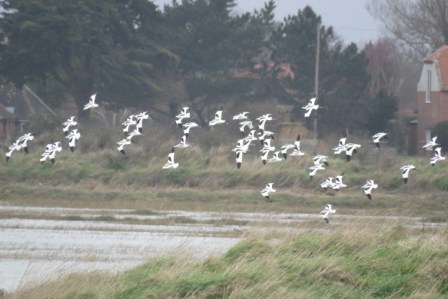 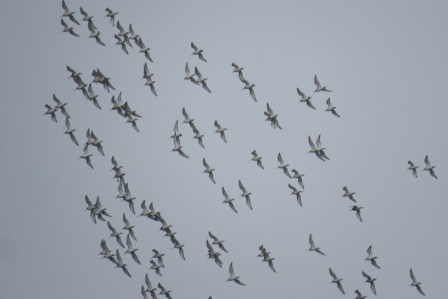 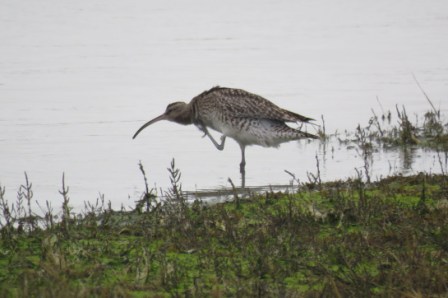 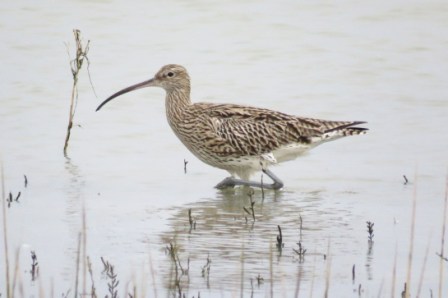 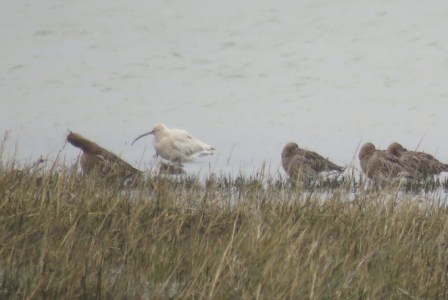 Medmerry: (Golf Links Lane to Ham viewpoint)  - The Spoonbill was roosting out in the middle of the reserve, though the oddest sighting of the day was an immature Kittiwake in a puddle, before eventually flying off into the reserve. Other sightings included 20+ Skylarks, 40+ Yellowhammers (inc a flock of 25 near Ham Farm), 3 Stonechats, a Red-breasted Merganser, 100+ Golden Plover overhead, 3 Buzzards and a Sparrowhawk (SH). 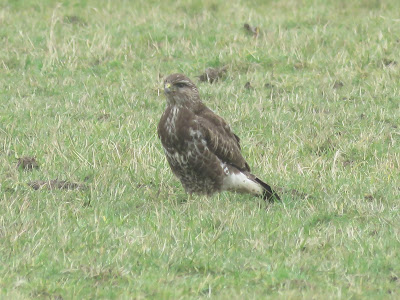 Breach area - The Black Redstart was around the rocks at the breach early afternoon, but seems very adept at vanishing completely! Nothing else worth noting. (CN)

Late this afternoon nine Fieldfares and three Redwings flew into roost in trees near the old pond, whilst both Barn Owls were out early, with one flying around two dog walkers on the Viewpoint but both keeping their distance from my camera!
Also three Avocet were roosting on the Stilt Pool and the Spoonbill was feeding there. (S&SaH) 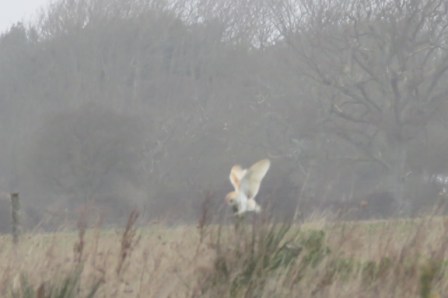 Barn Owl in the twilight at Medmerry (SH)

Saturday, 20th February: Mainly cloudy and dull, with a fresh WSW wind and the risk of showers through the day..... 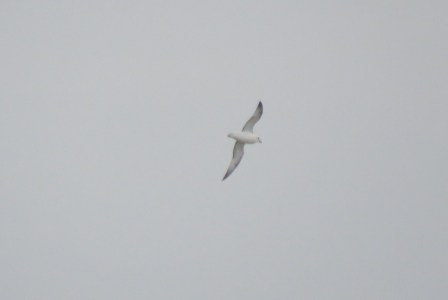 Fulmar (above) & Red-breasted Mergansers past the Bill (AH) 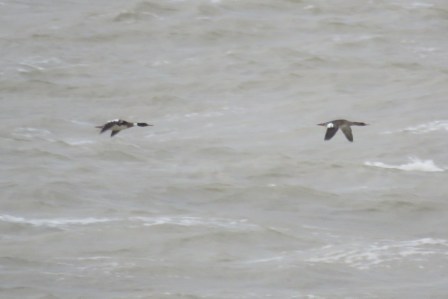 Selsey: A Blackcap was present in the observers' garden on the edge of the town this morning (S&SaH).
Ferry Pool: There were 300 or Golden Plovers on the field again at high tide, plus 1000 or more Lapwing, 30 Brent Geese, 30 Shoveler and 150 Wigeon, whilst there were two Black-tailed Godwits, two Shelduck, a dozen Redshank and 20 Teal on the pool. (AH) 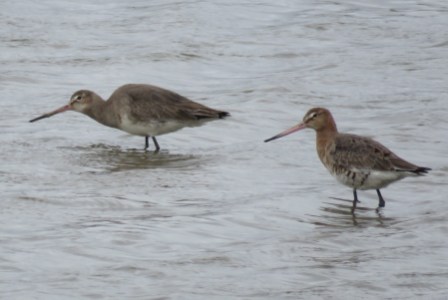 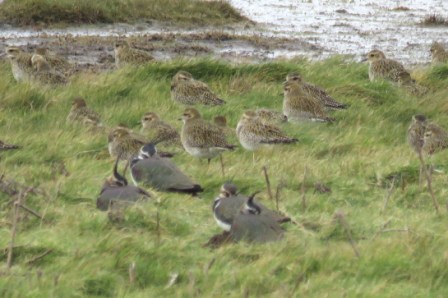 Church Norton: Very little to report - there was nothing on the sea save a Mediterranean Gull, the Whimbrel was in its usual haunt, a flock of roosting Grey Plover and Dunlin was on the metalwork and there were a few scattered Redshank, Teal and Wigeon, plus a Jay and a few goldfinches by the mound. (AH)
Mid-morning there were 2 Goldeneye and 3 Bar-tailed Godwits in the harbour, whilst offshore were 5 Red-breasted Mergansers, plus another 2W, and 30 Brent Geese high E, perhaps a sign of early passage? (S&SaH) 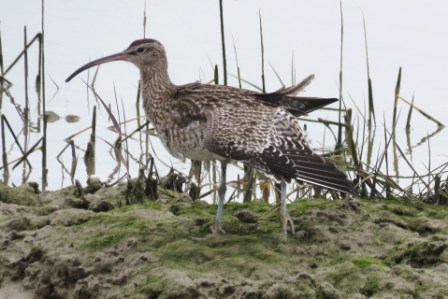 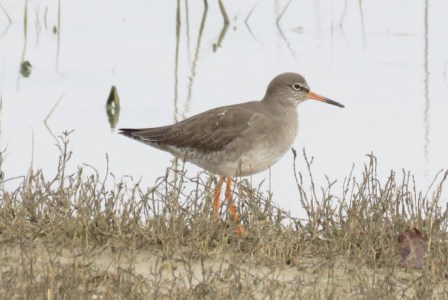 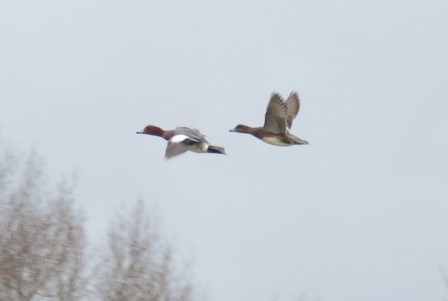 Medmerry: Easton Lane to the Stilt Pool - Pretty quiet this morning! A Fieldfare and a Jay were in the hedge before the poplars, along with lots of Chaffinches, and there were five Stonechats along the banks.
There were two Avocets on the Stilt Pool and four Red-breasted Mergansers on the tidal area opposite. (IP)

Chichester Marina: A drake Red-breasted Merganser was in the marina itself, but nothing was on the water beyond, a Mediterranean Gull and half a dozen Common and Black-headed Gulls were on the fields, along with a flock of c600 Brent Geese and 20 Curlews.
Also, a Brown Hare ran across one of the fields. (AH/CRJ)


Later the Black Swan was present, and in fields to the north 1000 Brent Geese and a Black Brant.... once seen the latter is easily found via the single white left-hand tail feather sticking up at a jaunty angle! (CRJ). 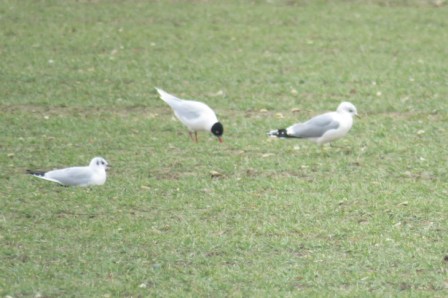 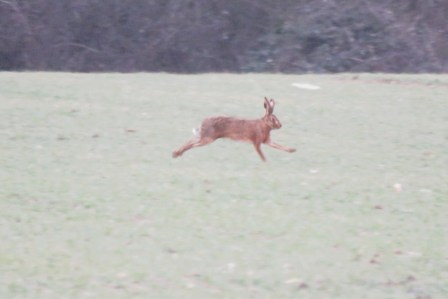 
Friday, 19th February: A bright, cold and frosty start with a light SW breeze, but it's not set to last.... with a front moving in cloud and rain is predicted to arrive by afternoon....


North Wall/Fields: A Kingfisher was sitting on the sluice gates this morning. In the Harbour a Peregrine put up all the waders before dispatching a Lapwing and carrying it off towards Tern Island. Early on the Brent Geese were on the Church Farm golf course and loafing in White's Creek; later they all congregated in the field immediately west of Owl Copse. I counted 3200 before they were put to flight by two dogs running along the Wall. Herons were again busy in the Copse and there 2 noisy pairs of Little Grebes on Owl Water. In the various fields I counted 340 Curlew. (JDW) 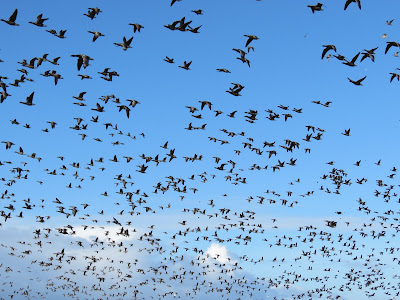 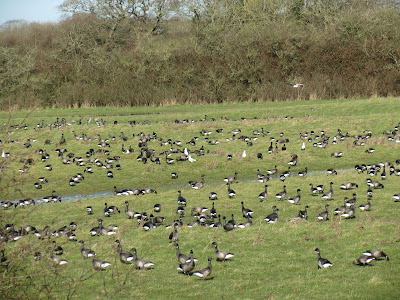 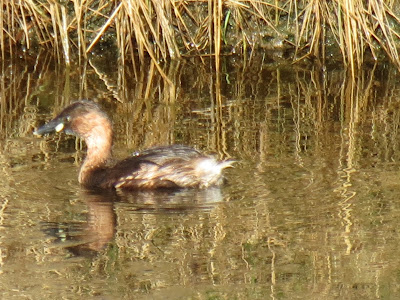 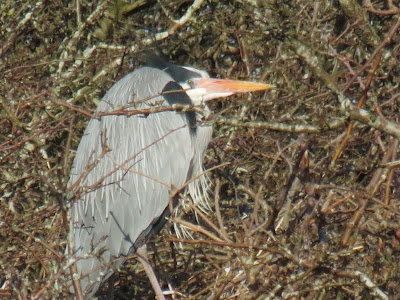 Ferry Pool: Around 300 Golden Plovers were with 1500 Lapwings on the field, along with 40 Brent geese and 200 Wigeon, but very little was on the pool itself. (AH)
Later this afternoon a Green Sandpiper was present, feeding in the far corner (SR). 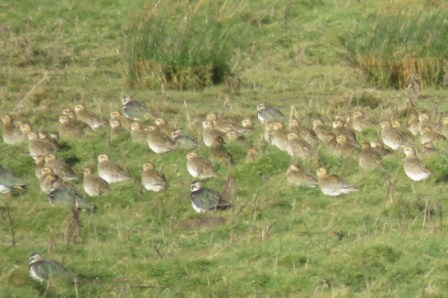 Golden Plovers and Lapwings on the Ferry (AH)

Medmerry: Easton Lane to the Stilt Pool - A Dartford Warbler was in gorse near the poplars, and on the ploughed field south of the farm there was a Grey Partridge and a Red-legged Partridge.
Along the banks there were at least ten Stonechats and 50+ Skylarks, along with a few Meadow Pipits and Reed Buntings, and two Green Sandpipers were near Marsh Barn.
A Spoonbill was visible out on the reserve before the tide dropped, whilst on the Stilt Pool the Common Sandpiper and Spotted Redshank were still present, along with two Avocets. (AH/PLS) 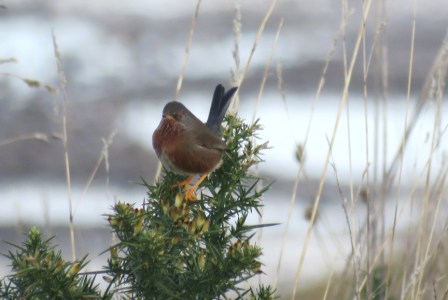 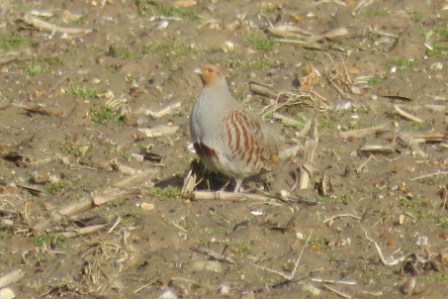 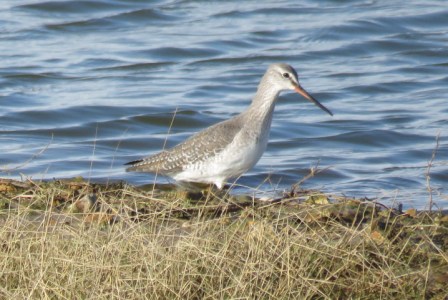 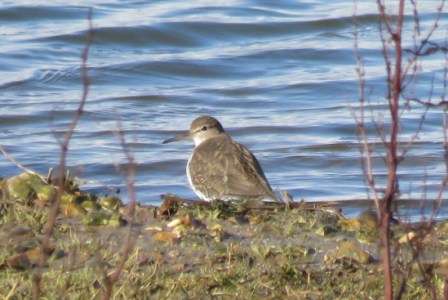 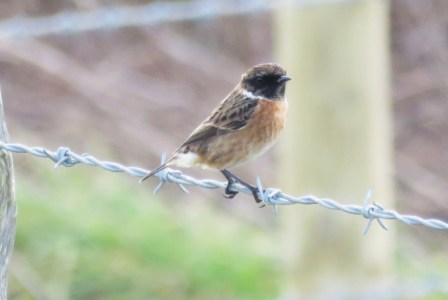 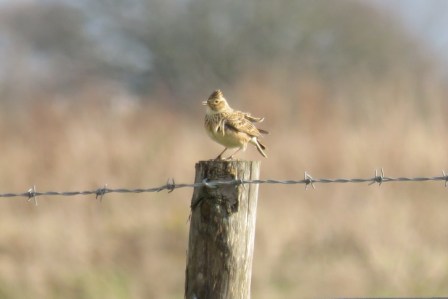