Saturday, 6th February: More of the same; grey and overcast with strong to gale force S to SSW winds and the risk of showers.....and heavy rain due later in the afternoon!


Chichester Marina: A Black Brant was with 30 Brent Geese in the fields north of the aproach road this morning. (BI) 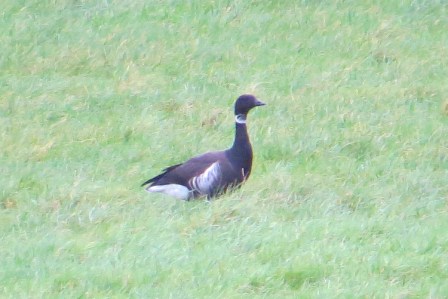 Black Brant (above) & with Brent Geese at Chichester Marina (BI) 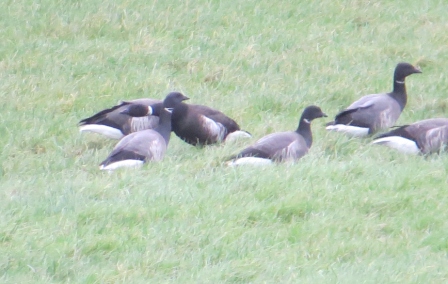 Fishbourne Creek: Two Stonechats were on the fence-line, and six Rock Pipits, six Meadow Pipits, three Yellowhammers and two Reed Buntings were around the saltmarsh. There were plenty of Black-headed Gulls, Wigeon and Black-tailed Godwits in the flooded field, whilst on the water there were a few Wigeon, two Great Crested Grebes and twenty Coots. (BI) 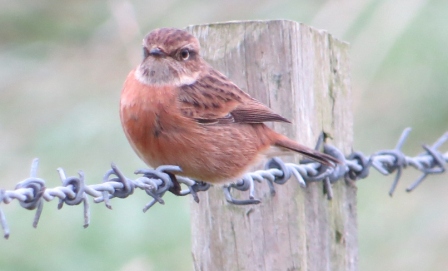 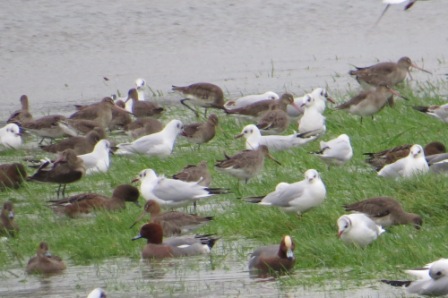 Birdham Pool: There were just four Grey Herons this morning of note, plus plenty of Mallard/hybrids of various hue and 16 Black-headed Gulls. (BI)

Ferry Pool: A Spotted Redshank was with a dozen or so Common Redshank on the pool this morning. Also present were 20 or so Curlew, 80 Lapwing, 30 Teal, four Shelduck, and there were 100 or so Wigeon on the field. Also a Chiffchaff was in the Discovery area, and first thing a Grey Wagtail dropped in by the Environment Agency yard. (AH) 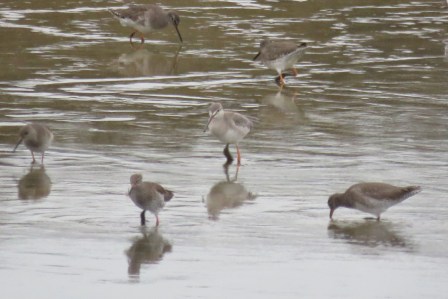 Spotted and Common Redshank (above) & Curlews on the Ferry (AH) 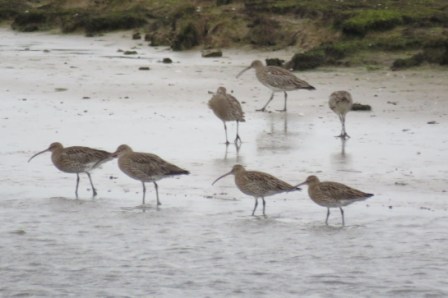 Church Norton: A Great Northern Diver and four Red-breasted Mergansers were offshore, whilst in the harbour there were a further eight of the latter, plus two Goldeneye and three Little Grebes, whilst two Pintail went over.
The Whimbrel was in its usual haunt near the bench, and there were 200 Knot and 100+ Grey Plover among plenty of the regular waders as the tide dropped, whilst the Peregrines were also intermittently present. (AH) 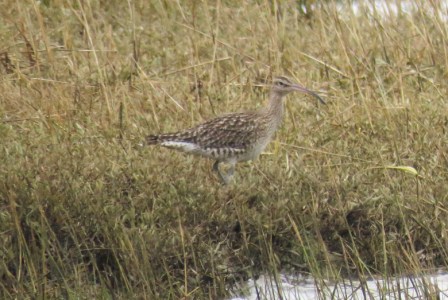 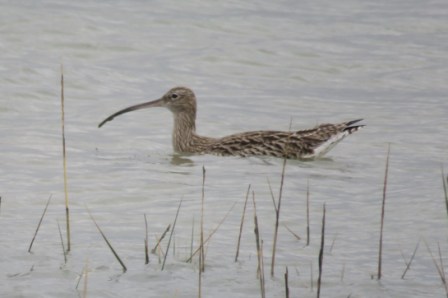 I would to thank all the volunteers that attended the Tern Island project on 3rd and 4th February 2016. A great time was had by all and about nearly half of the area that the shorebirds use was cleared. (See Photos)
If you missed the opportunity to join us over the last two dates then don’t worry there are two more dates to come.
Each year at Pagham we venture out in to Tern Island, in the centre of the harbour (at low tide I may add) to carry out a vegetation clearance project (weeding) to ensure that there is plenty of open shingle for the returning Little Terns in April. It is an ideal opportunity to view the reserve from a different aspect, which few have the opportunity to do.
If you are interested and want more information or wish to join us then please contact me on ivan.lang@rspb.org.uk or 01243 641508
To join us meet at Church Norton Car Park, which is at the end of Rectory Lane off the B2145 just before reaching Selsey at
11.30 on 17th February 2016 or 09.30 on 2nd March 2016
Please ensure that you have wet weather gear, warm clothes as it can be chilly out on the island, and wellingtons are essential to cross to the island. If you have work gloves and a garden fork that would be useful to bring but not essential.
Thanks you, your help will be appreciated by all the birds that use the Island this summer
Ivan M Lang
Warden, Pagham and Medmerry 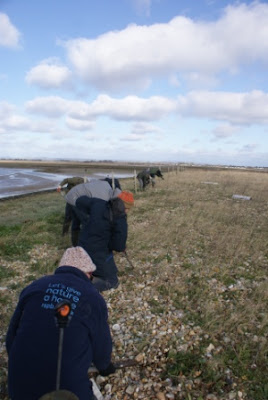 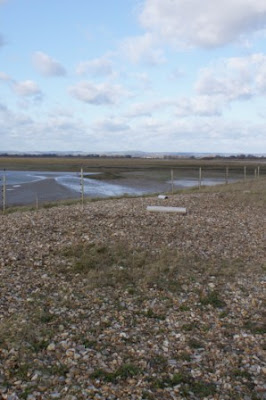 Progress on the clearing of Tern Island (IL) 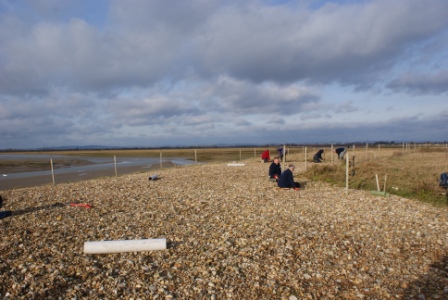 Friday, 5th February: A grey and overcast day with some occasional drizzly showers and a strong SW wind.....

Church Norton: There were six Bar-tailed Godwits among plenty of the commoner waders - including 250+ Knot - in the harbour, where there was also a Red-breasted Merganser and 40 Wigeon. About 30 Goldfinches were in the trees by the Mound, and similar of Linnets were in the ploughed fields along the west side, and there were one or two Reed Buntings and Meadow Pipits present in that area, too.
Also, a Mistle Thrush was in the field divide opposite the entrance to Park Lane on the main road. (AH) 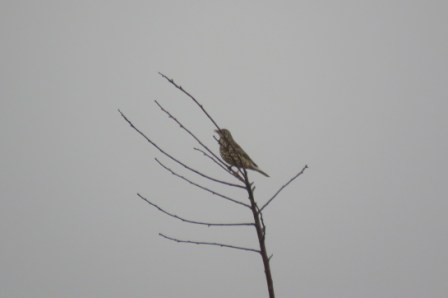 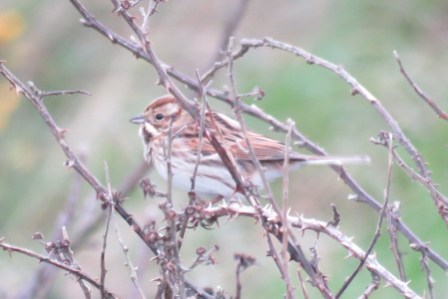 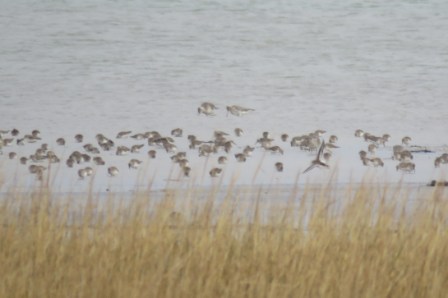 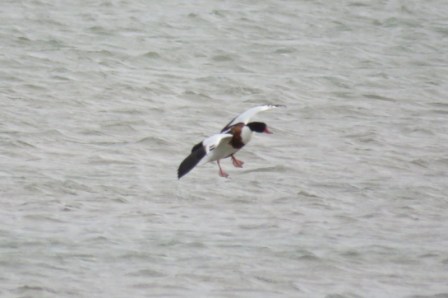 Chichester Marina: The flooded reedbed and marsh held 14 Shoveler, 60+ Teal and 8 Gadwall, with at least one Cetti's Warbler present and a Sparrowhawk over. In the channel were a few each of Red-breasted Merganser, Great Crested Grebe and Little Grebe, plus a Sandwich Tern fishing, but with the Lock gates still closed for repairs and workmen scurrying around it was not really practical to spend long here - especially when the rain started! (OM)

Chichester Gravel Pits - New Lake: A brief visit produced 24 Pochard (17 drakes and 7 females), 8 Shoveler and a few Tufted Ducks. A female-type bird with some notable white at the base of the bill was probably also one of the latter; however it spent its time roosting and preening on/under lakeside branches and wouldn't come out in the open to allow clinching views (!) A number of Cormorants were at or around the nesting colony and showing a little interest.(OM)

Thursday, 4th February: Here we go again, with a return to milder but wet and windy conditions and the prospect of a very changeable week ahead. To make things worse, we seem to have entered a fairly stagnant period bird-wise with rather little on offer at present and few excitements...... yet spring is not too far away, the days are lengthening and it may be only a few weeks before the first Wheatears return.... hang on in there!


At a time like this, there is nothing like a bit of sunshine to lift the spirits, so cue another visit down memory lane to The Archives - this time Vol 2 - to have a look at a sunny day from years gone by at the Bill. Such a day was 2nd May 1990......with unbroken sunshine, cloudless skies, a light E/NE breeze and plenty of good birds. The Log that day recorded 18 Pom Skuas - and other excitements too - including Little Gulls, a good passage of Black Terns and a Long-tailed Duck, whilst in the Bill House garden was a Pied Flycatcher. It was also the day that a certain Mr Jones was to be found cooking sausages for those regulars present, on a barbeque he brought to the beach. A great day! 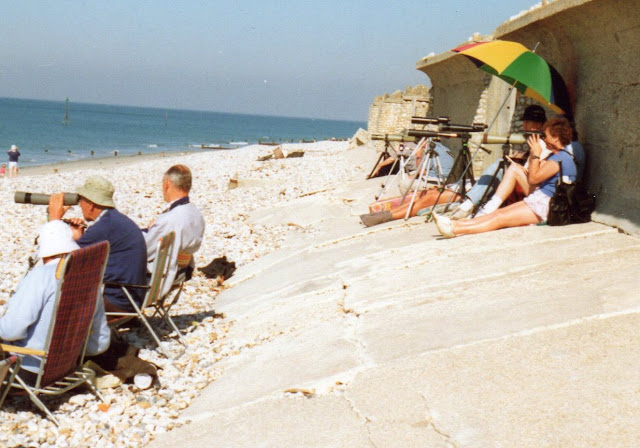 On the wall at Selsey Bill, 2nd May 1990. There was almost a party atmosphere at times, as observers enjoyed fine weather, great birding and barbeque food! Sadly though, looking through these photos, I now realise that four of those present then are no longer with us today, so best wishes and fond memories from all to the late Harold Turner, Bob Knight, Owen Laugharne and Barry Carter....our absent friends. (OM) 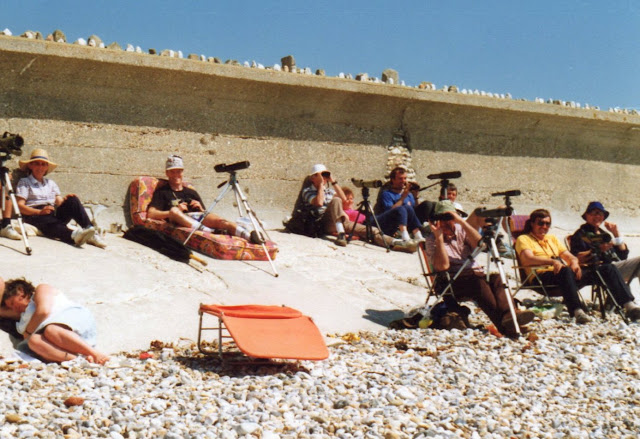 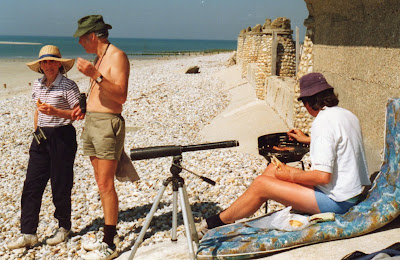 
Medmerry: Breach area - The Black Redstart was still present near the viewpoint and a male Stonechat was nearby. (BFF/DM)


Church Norton: The Peregrines were both present, along with a Red-breasted Merganser, 100+ Knot, 500+ Dunlin, 50+ Grey Plover and 20+ Curlews, plus at least 1000 Lapwing were put up by the Peregrines. (AH/PC )
Also seen were two Great Northern Divers, five Red-breasted Mergansers and two Great Crested Grebes offshore, a Short-eared Owl was flushed from Tern Island by the work party and flew off east over the harbour, and the Whimbrel in its usual area. (BFF/DM) 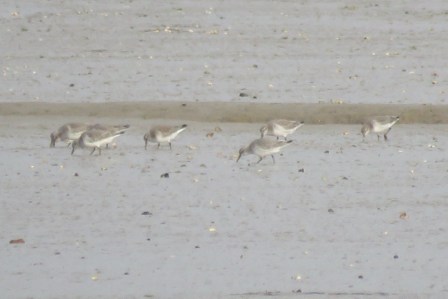 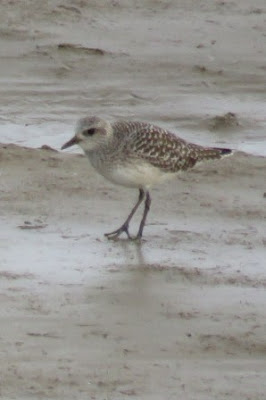 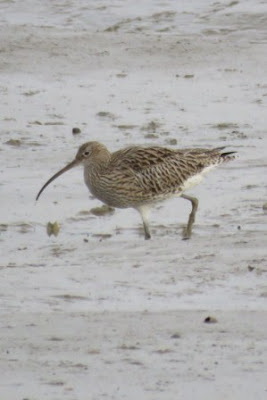 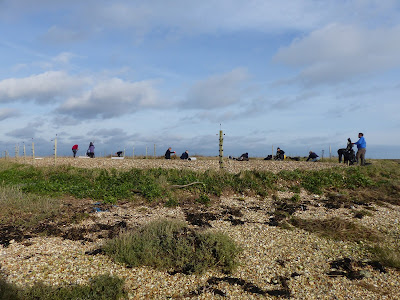