Tuesday, 9th February: A wet start with cloud and heavy rain at first, though thankfully yesterday's storm force winds have passed, leaving a moderate to fresh westerly and the prospect of something drier and brighter later.....

After yesterday's near impossible sea-watching conditions, my thoughts turned to days gone by, during the period of the early 1990's when the regulars had access to the comfort of Bill House tower and the shelter it provided from wind and rain. Although never easy to watch from if more than a couple of people were present - mainly due to the small windows and large pillars - it did provide a cosy atmosphere and give a good view to the horizon. There are actually very few photos in the Archives of observers inside the tower , but below is one from early 1991 which gives some idea..... (OM) 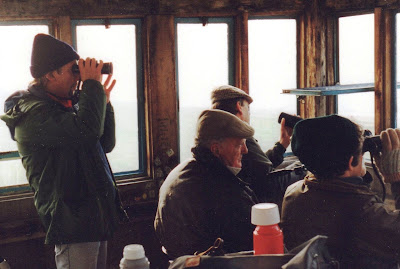 Observers watching from inside Bill House tower (originally a Coastguard lookout) in Jan 1991; left to right are Chris Janman, Alan Ford, the late Barry Carter and Jim Weston. The small opening windows and large pillars can be seen, as can the somewhat cramped conditions, but it was very cosy during cold and wet weather. Sadly we only had access here for a couple of years or so until the pleasant owners of the time sold the property. (OM)

Church Norton: A Merlin was the highlight, with other sightings including the regular Whimbrel, the two Peregrines and 20+ Avocets. Standing on the inner beach we were amazed at the huge swell with massive surf breaking through the Church Norton spit near the old harbour entrance, see attached photos. (BFF/DM et al) 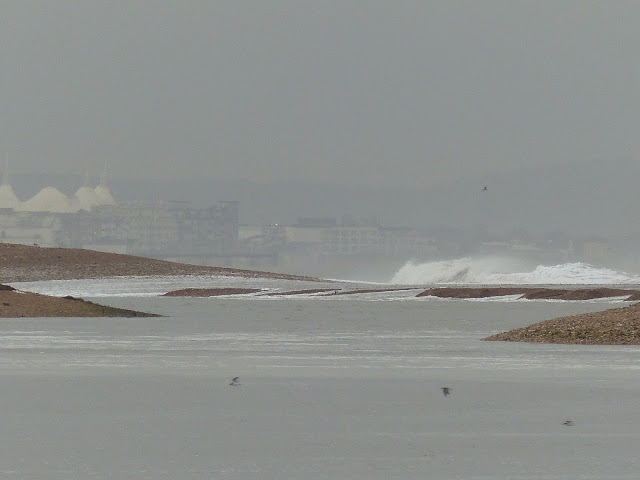 The sea breaking in at Church Norton....will the harbour have it's old entrance back in future....?? (BFF) 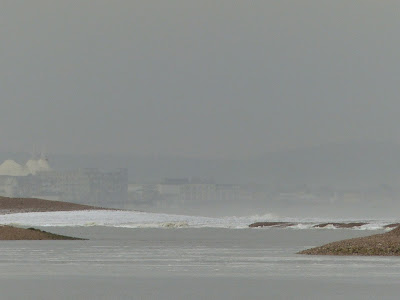 Ferry Pool: A surprisingly interesting look at high tide included an Egyptian Goose flying over west out of the harbour and continuing on its way, a Green Sandpiper, a Black-tailed Godwit and at least a dozen Snipe on the flooded field and around 300 Golden Plover in with 1500 Lapwing, all getting spooked by a low-flying Chinook helicopter. On the pool itself there were 75 Redshank, a pair of Shoveler and 30 Teal, and there were also 20 Curlew and 100+ Wigeon at the back of the fields. (AH)
Nearby, from the tramway at least 12 Avocet roosting and 160 Pintail in the harbour. (BFF/DM) 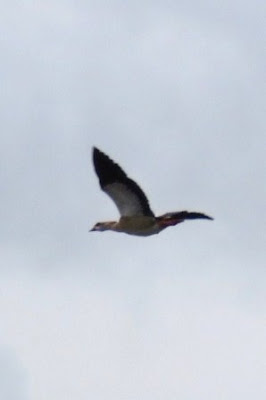 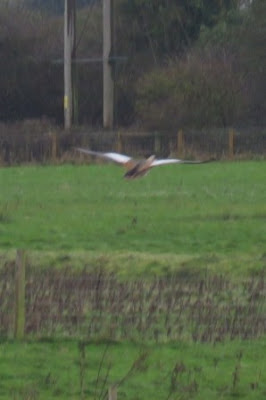 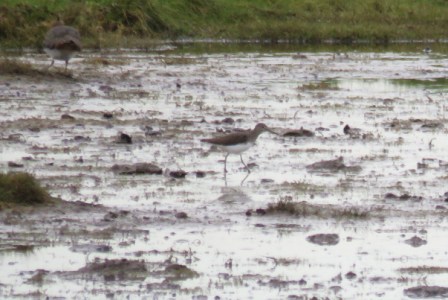 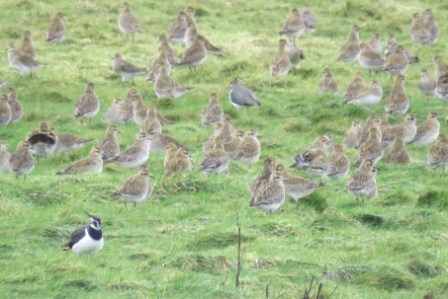 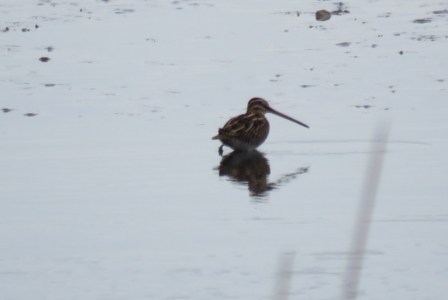 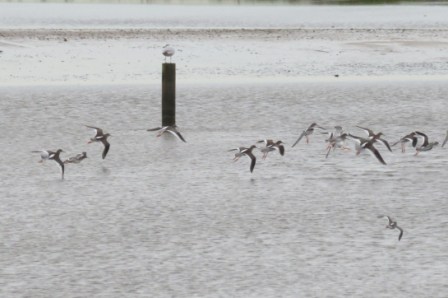 Chichester Marina: A Black Brant was in with 1500 Brent Geese in the fields at the back of the marsh by the approach road this morning, and a pair of Bullfinches was in a hedgerow near the reed-bed, together with a dozen Chaffinches, 10 Reed Buntings and a Song Thrush at full throttle. The flooded marsh also held 40 Wigeon, 75 Teal, 16 Gadwall, 12 Shoveler, 10 Tufted Duck, 92 Black-tailed Godwits, 50 Lapwings and 2 calling Water Rails. Nearby in the channel there were 13 Red-breasted Mergansers and 5 Great Crested Grebes, plus a dense flock of Oystercatchers and Shelduck on the opposite bank, which I couldn't count!  Meanwhile, along the old canal our old friend the Black Swan has re-appeared and was busy chasing Mute Swans away, but further on I discovered an open and unguarded Swan's nest with 6 eggs therein; half an hour later it was still unguarded with no swan in the immediate vicinity, so if it has been abandoned or not I don't know, but will monitor with interest. (OM) 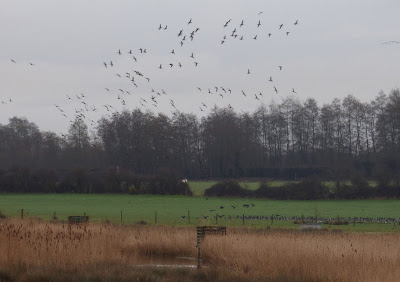 Chichester Marina this morning: above - Brent Geese flighting in to the back of the marsh, and below - the Black Swan seeing off a Mute, and not too far away an unguarded and open swan's nest containing 6 eggs.... I wonder if the Black Swan is in any way connected, but time will tell (OM). 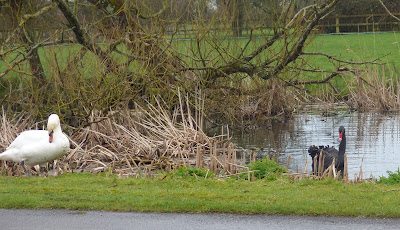 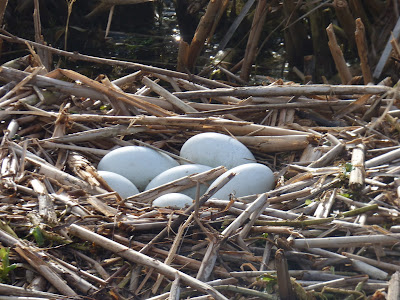 West Itchenor: There were two Whimbrel together among the roosting waders (making it possibly four wintering birds for the peninsula), though there was not much else of note, beyond large numbers of regular waders and Brent Geese, plus four Great Crested Grebes on the water. (AH) 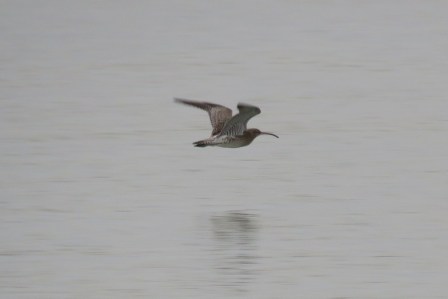 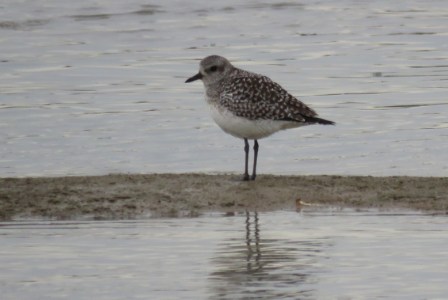 Chichester: Two Red Kites drifted over the Bognor Road (well spotted by AB from his car and thanks for the call!) before drifting back south west over Quarry Lane along the border of 'Peninsula' airspace. (AH) 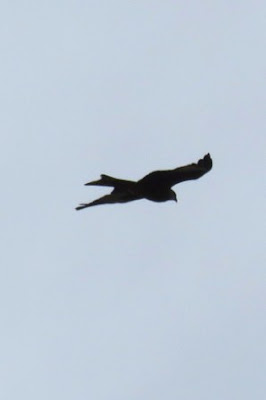 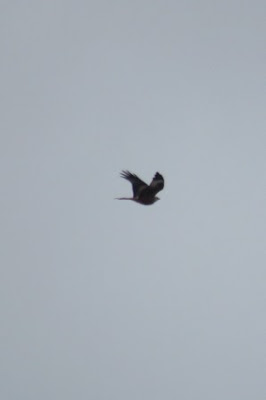 Red Kites over the south of Chichester (AH)

Monday, 8th February: Yet another day of severe gale force winds, as the South Coast felt the full force of 'Storm Imogen' sweeping in from last night and through today. Fortunately the heavy overnight rain quickly passed, leaving a fairly dry day, but the WSW gales were gusting up to storm force 10 late morning as the high tide came and went.....


Selsey Bill: Absolutely nothing moving - two Red-breasted Mergansers and six Turnstones west the reward for 40 minutes watching this morning! (AH)
I tried a watch from 1130-1245hrs but conditions were so bad that sea-watching was all but impossible.... WSW 8-10, huge swell, constant heavy spray from wave tops, surf crashing in past the top of the beach, poor visibility and even some glare from the odd sunny period! There were no birds either apart from 50 Black-headed Gulls and a dozen Herring Gulls hunkering down on the playing field, and 25 Turnstones up and down the shoreline. Add to that the constant stream of visitors obscuring what view there was as they tried to take photos and today was probably one of the worst sessions ever at the Bill for me. It was time to abandon, go home and catch up with the admin! (OM) 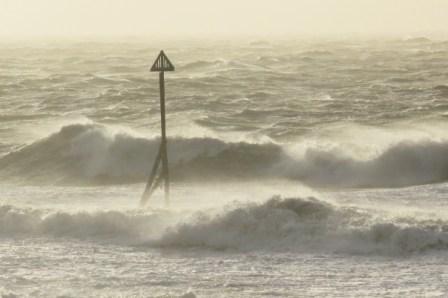 Stormy weather at the Bill (AH) 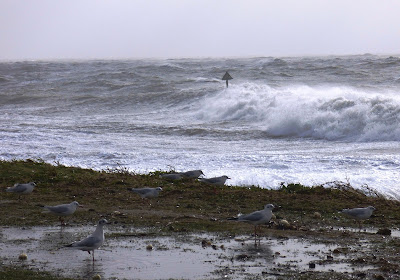 Black-headed Gulls on the Oval field and Storm Imogen battering the Bill-tip  - though the pics don't do justice to how bad it actually was! (OM)

Church Norton: The Whimbrel was present, and there were plenty of waders on the rising tide, including 250 Knot, 100 Grey Plover and 800 Dunlin, and there were also 12 Brent Geese, 30 Shelduck and three Red-breasted Mergansers about. (AH)

I searched the copse but couldn't find the Treecreeper; a Sparrowhawk was the only bird seen. Offshore was a close Great Northern Diver and a male Eider (record shot of latter attached... make allowances for the conditions!) (SR) 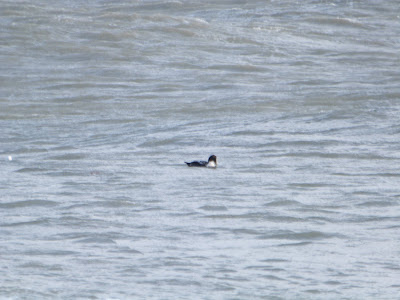 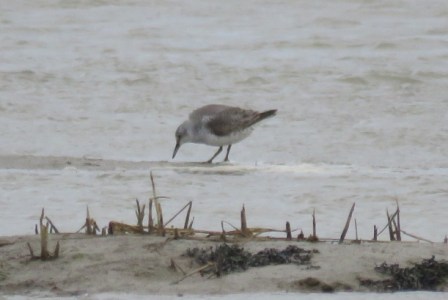 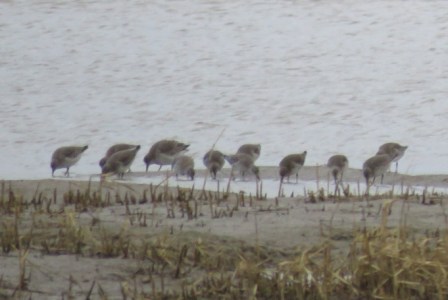 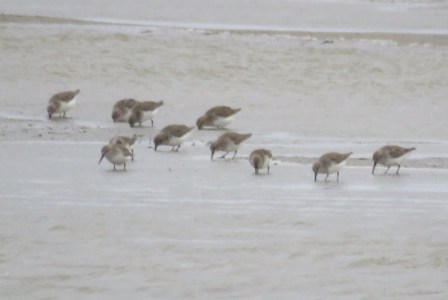 Pagham Lagoon: This morning on the Lagoon were three Goldeneyes (one ad male), a pair of Red-breasted Mergansers and five Pochard (two ad males) and a dozen Mediterranean Gulls.  Through the force 10 - 11 wind I battled on to the hide and saw not much, an albino Black-headed Gull (all white save for black under-primaries) being of note. (ARK, per SOS website).

Sunday, 7th February: A bright, but brisk and very breezy morning..........with a strong SSW 6-7 and the probability of rain by evening. 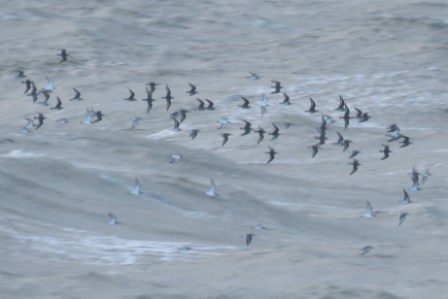 Dunlin (above) & Red-breasted Mergansers past the Bill (AH) 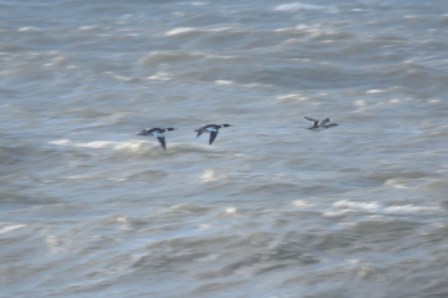 Church Norton: Bird of the day was a Treecreeper in Bluebell Wood this morning, plus a Great Spotted Woodpecker there. (S&SaH)
Otherwise it was standard fare, including a Goldeneye and three Red-breasted Mergansers in the harbour, 11 Bar-tailed Godwits on Tern Island, the Whimbrel in its usual spot, around 30 Avocets, three Pintail and half a dozen Snipe off the end of the Ferry Channel and lots of the regular waders roosting at high tide. Also at least one Chiffchaff and a couple of Goldcrests were along the sheltered hedges. (AH/IP/S&SaH/JD et al) 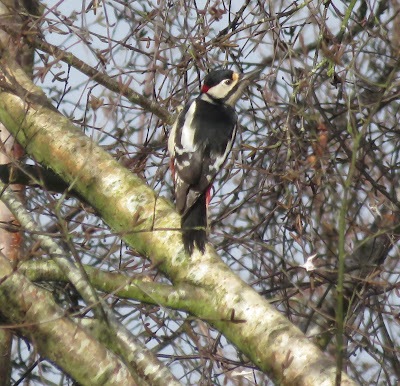 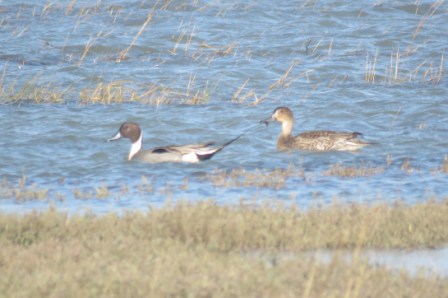 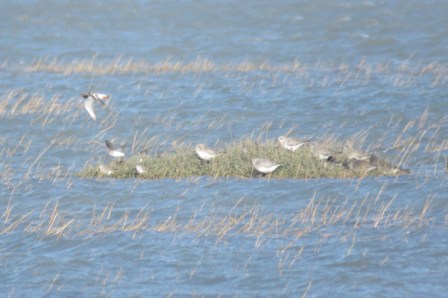 Somerley - Almodington: The best bird was a superb male Bullfinch at the Almodington end of the path, others included a Stonechat, a Goldcrest, 11 Yellowhammers, a Green Woodpecker, a Kestrel and two Buzzards. (SR)
Ferry Pool: Just a handful of Redshank and 30+ Teal present early on (IP), and later on c600 Brent Geese in the field and c500 Lapwing over, but very little on the pool. (AH)
Later on a Kingfisher was in Ferry Channel. (S&SaH) 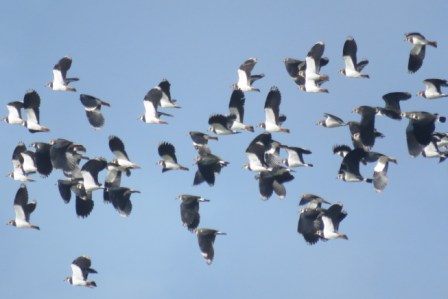 Lapwings over the Ferry (AH)

North Wall: A flock of c.1200 Lapwing up over the Wall as I arrived this morning, also 1000 Brent in the Honer Fields. A walk around the east side of the harbour, and the Slipe field, in the strong wind produced just a few Dunnocks, a Green Woodpecker and several Oystercatchers on the golf course. ( CRJ)
Posted by Andrew House at 12:40