Wednesday, 9th October: Very heavy, torrential showers overnight and into early morning, clearing by around 0800 hrs to give sunny periods with heavy cloud and a brisk westerly wind, whilst remaining generally unsettled.....

Apologies for the somewhat reduced information at present - largely due to a defective internet service in the Chichester area, which is beyond our control and seriously affecting AH!  (Eds) 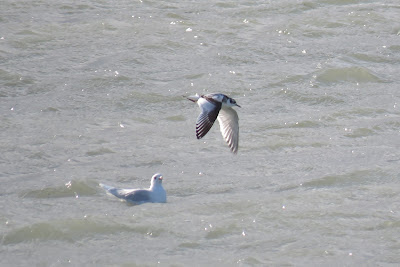 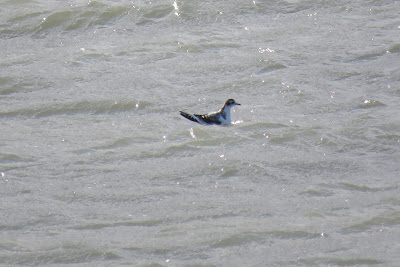 Little Gull (above) & Eider at the Bill (AH) 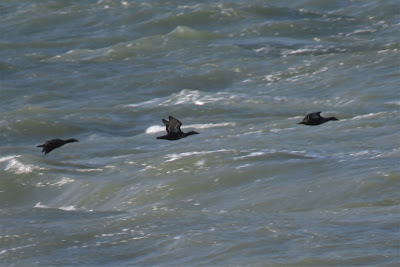 Ferry Pool: There were four Snipe present this morning, along with a dozen Black-tailed Godwits and 100+ Lapwings. (AH) 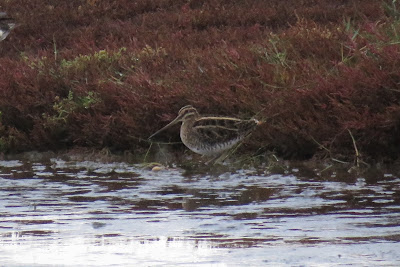 Snipe on the Ferry (AH)

Church Norton: Up to ten Stonechats were along the front, but few other migrants were seen beyond a few Swallows. (AH) 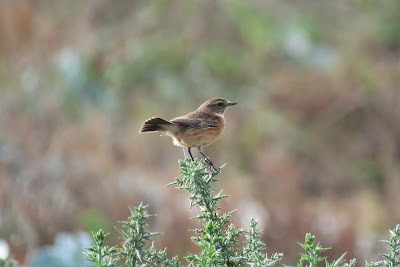 Tuesday, 8th October: Dry and cloudy with some brightness later and a moderate westerly wind....though with the risk of a shower never far away. 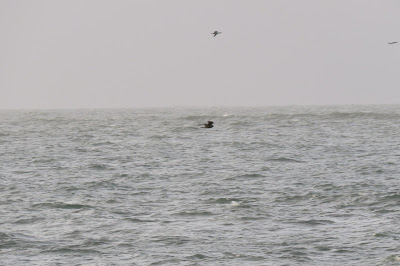 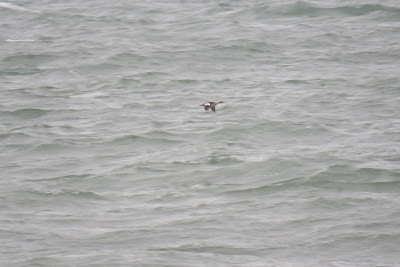 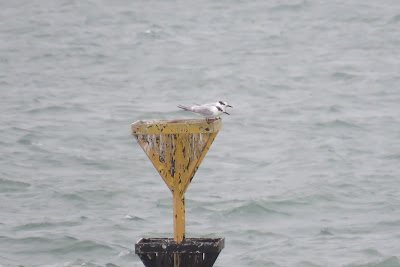 Pagham Churchyard: A rather elusive juvenile-type Ring Ouzel was associating with Blackbirds in the yew trees at the back of the churchyard this morning and four Goldcrests were also present. (OM)

North Wall: A number of Pintail & Wigeon were in White's Creek at midwater and there were also a number of Wheatears along the path. (PMu)

Also,the Salt House area this morning on the falling tide and a wealth of birds there was including ca. 300 Wigeon and 138 Pintail, while waders included 82 Black-tailed Godwit and 10 Knot, 10 Grey Plover, two Bar-tailed Godwit, a Golden Plover, a Greenshank and three Spotted Redshanks. Also there were four Yellow-legged Gulls, 13 Shelduck and 30 Mediterranean Gulls present and a juvenile Hobby flew west at 12.20 and three Cetti’s Warbler were heard along the North Wall. (HB/ARK per SOS).


Runcton: A female Redstart was frequenting the line of oaks in Saltham Lane today. (CRJ)


Ferry Pool: The Australian Shelduck was again present, but otherwise there was no real change from recent days, with 30 Wigeon, 150 Lapwings, 30 Teal, 6 Shelduck and 12 Black-tailed Godwits present this morning. (AH) 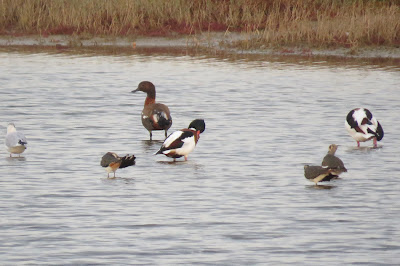 Australian Shelduck on the Ferry (AH)


Church Norton: A Merlin was resting up on the fence-posts on Tern Island this morning, before flying off into the harbour. Waders present included 6 Knot, 100 Dunlin and 50 Grey Plover, whilst c.50 Swallows flew through and 6 Blackcaps and a few Chiffchaffs were in the bushes. (AH) 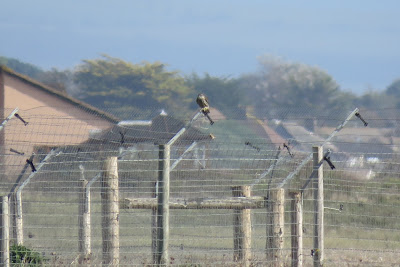 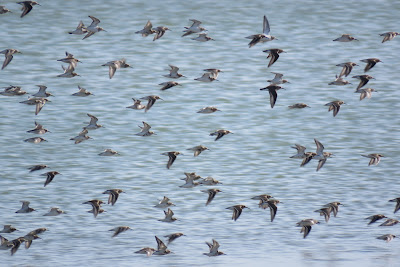 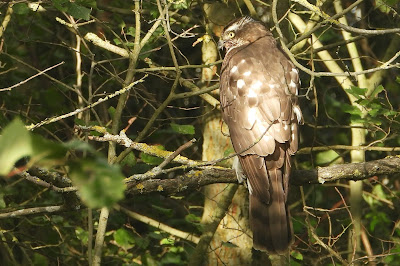 On the non-avian front, the Ivy blossom along the hedgerows between the beach and the Severals were filled with butterflies in the morning sunshine. At least 40 Red Admirals were joined by about 8 Painted Ladies and a couple each of Peacock and Comma. Also a few Migrant Hawkers and Common Darters about. (AM) 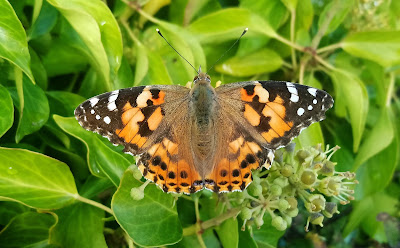 Painted Lady (above), Peacock (centre) and Red Admiral (lower) at Church Norton (AM) 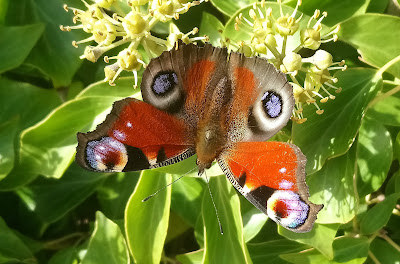 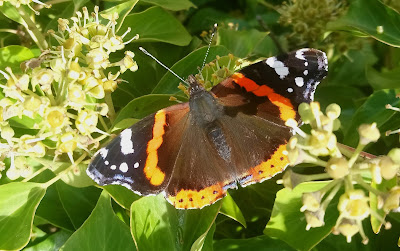 Monday, 7th October: A variable morning, initially gloomy and with intermittent drizzly rain in a light north-westerly before brightening as the breeze picked up and shifted south-west, though with the forecast of more rain later.........eventually becoming wet and windy from mid-afternoon, with a stiff south-westerly making it rather unpleasant!

Tern Island: The first project of the winter was successfully carried out by brave group of volunteers today at Pagham Harbour and despite the rain and a little wind, staff and four volunteers spent two hours starting the important work of clearing vegetation. This was also an opportunity to see the Harbour from a totally different perspective and have a positive experience in helping one of Pagham Iconic species. This is just the start of the winter work, so if you wish to help out the next project is on 9th October, meeting at Church Norton Car Park at 14.15, finish about 3hrs later. Please bring with you wet weather gear, Wellington's, a garden fork If you have one and a smile.


Also if anyone has lost a black birder's notepad, one was handed in today at the Visitor Centre at Pagham.  With thanks,  Ivan Lang, RSPB Warden 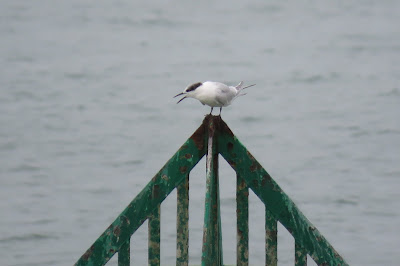 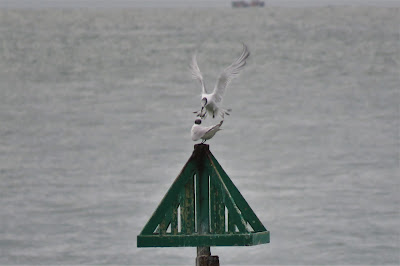 Sandwich Terns (above), Chiffchaff & Brent Geese at the Bill (AH) 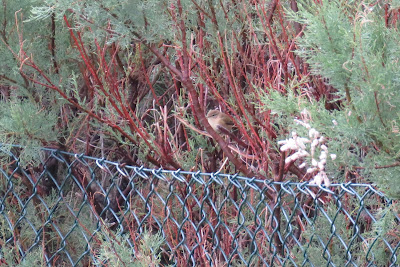 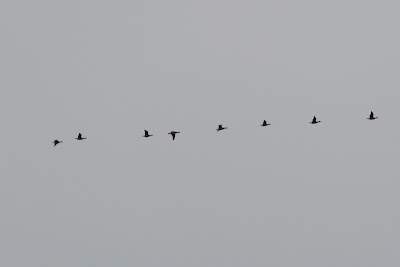 Medmerry: Easton Lane to Marsh Barn - There were 16 Corn Buntings together atop the gorse opposite the footpath to Earnley Concourse this morning. (GT)

Ferry Pool: A Common Sandpiper and a few Wigeon were on the pool early this morning. (IP)
Later on there were four Shovelers, along with a dozen Black-tailed Godwits, c200 Lapwings, six Shelduck and c50 Teal. (AH) 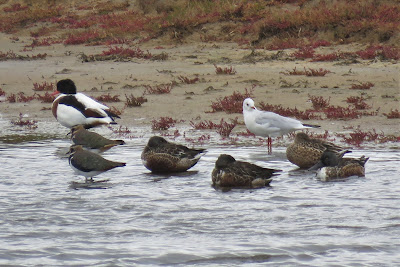 Shovelers, Lapwings, Shelduck and Black-headed Gull on the Ferry (AH)

Church Norton: Five Eider, flying west offshore late this morning, was the only notable sighting on a generally quiet morning.
The bushes along the front were quiet, but there were a couple of Stonechats, a couple of Reed Buntings and half a dozen Blackcaps and Chiffchaffs seen, whilst at least 100 Swallows and a handful of House Martins and Meadow Pipits moved through overhead.
The harbour held three Knot, four Common Gulls, a couple of Bar-tailed Godwits, c20 Grey and Ringed Plovers, a few Dunlin and the wintering Whimbrel, back in its familiar haunts, along with 20+ Pintail, and a couple of Sandwich Terns and 14 Brent Geese went west offshore. (AH/IP) 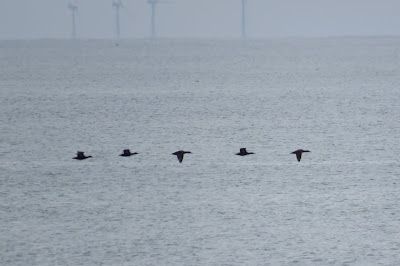 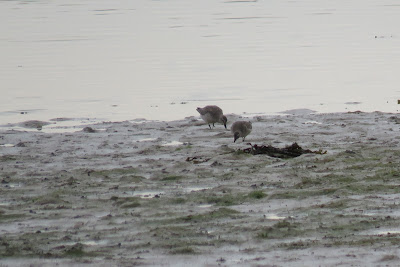 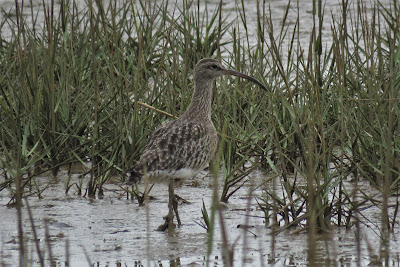 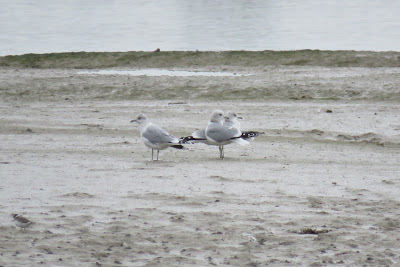 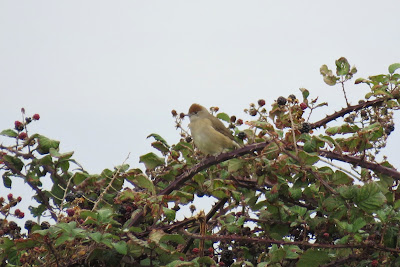 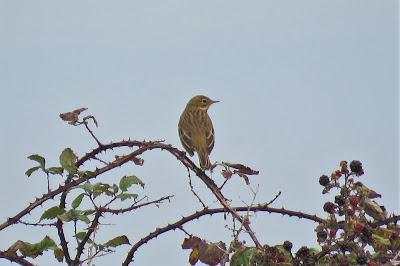 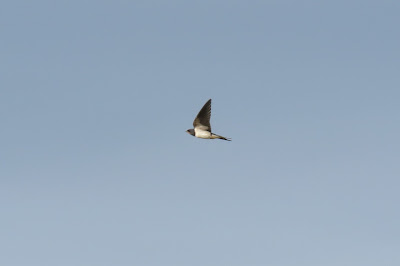 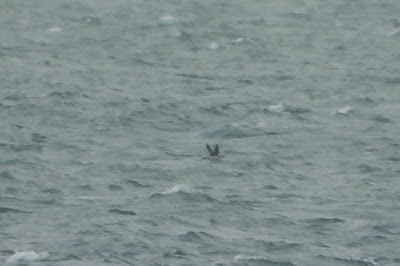