Thurs 14th MARCH: Selsey Bill (0800-0930 & 1200-1400hrs) Dry, sunny, some cloud, wind light NW 1-2, backing SW 2-3. Watched for over three hours (two sessions), but it was predictably slow in the light northerly. In between watches I visited the Selsey West beach area looking for migrants but it was dead and not a Wheatear could I find; all the more frustrating as they've started regularly turning up at Portland and elsewhere now. Still, it won't be too long I guess! 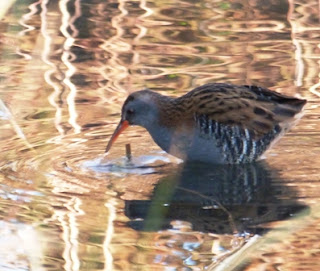 Just before I packed up, Sarah Russell joined me on the wall and took over the log; she tells me the wintering Water Rail (since at least 21/1/13) was still on Selsey East beach pool on 12/3 when it showed well. (photo: Sarah Russell).

Weds, 13th MARCH: No reports received today from Selsey or the area.
Posted by Birderowen at 17:39