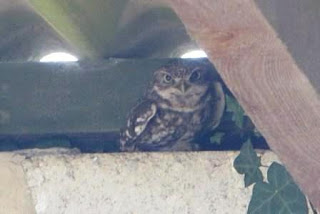 Little Owl, Selsey area, 29th March (photo: Andy House)
﻿﻿﻿
Ventured onto the Selsey West Fields from the coast and from inland today. This morning from the beach, 1 Wheatear, 8 Teal, 2 Wigeon, 20 Skylark, 2 pairs of displaying Lapwing, but sadly not Sarah Russell's smart male Black Redstart. This afternoon around the Sidlesham sewage farm, 1 Barn Owl, 6 Chiffchaffs, 20 Meadow Pipits 20 Stock Doves and a huge flock (1500 approx) of Wood Pigeons sat on a bare field. At a further private site the Little Owl was still present, looking less pleased to see me than I was him! (pic attached), along with more Chiffchaffs, 4 Reed Buntings & 1 Common Snipe. (AH)
Posted by Birderowen at 09:31