Saturday, 20th April: Firstly, apologies to those who have tried to contact me on my mobile phone today - it has developed a fault and I need to replace it a.s.a.p.
The sighting of the first Poms yesterday ensured there would be a good turn out of observers this morning, but it was a bit of an anti-climax. Two Hobbies had arrived by 0700 but it didn't really get any better than that and there were long periods when nothing was moving. Even the arrival of Pete Grimmage and the Hants boys - normally a good omen for Poms - failed to produce any magic and most observers had left by 1000hrs. Details below.... 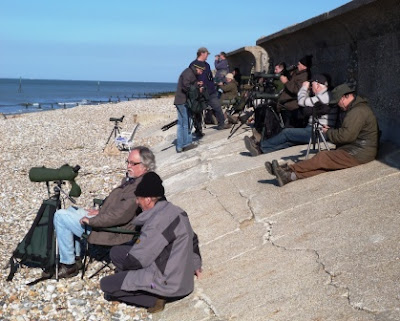 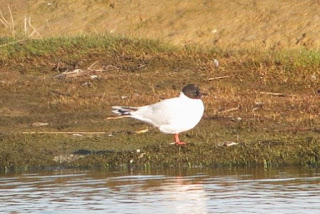 Little Gull, Sidlesham Ferry (photo: Andy House)
____________________________________________________________________
Friday, 19th April: News from the late shift at the Bill of 3 Pom Skuas E high up this evening at 1855hrs, and then to cap it a Great White Egret at 1905. Report from Ian Pitts herewith gives the full flavour of the event:-
I arrived at the Bill at 6pm to find it bereft of humanity, no wind and a bright sunny sky - not ideal conditions.
I almost felt like sunbathing (and the lack of bird activity could easily have sent me that way). Andrew House arrived at 6.35pm and we chatted, well more accurately I looked out to sea whilst he chatted to me (with no telescope which he had left in the car) - you know where this is going.
Just as I was explaining to him (not to say that Andrew was moaning about the lack of bird activity) that I would hate birds to be like trains, I spotted three large lumbering shapes high in the sky against a dark cloud that had appeared offshore, over the near triangle (no idea how they got there, except they appeared to have come round the Island) about a mile offshore, well you know the rest of the story, three light phase Poms (one with reasonable spoons). I suggested to Andy that he rushed back to his car for his telescope (well the language was not quite like that) as he confirmed my initial thoughts. This was 6.55pm. I quickly sent the usual protagonists the good news, well it was for me anyway. Five minutes later a very disgruntled Justin appeared round the wall and what a blessing that proved to be, the time is now 7.05pm
He sat down and peered into his scope immediately spotting a little egret lower in the sky, but in the same spot otherwise as the Poms, clearly flying towards Pagham Harbour. Well all three of us started to comment about long legs, then a clearly snake like neck and then the inevitable cry from all three of us GREAT WHITE EGRET, which Justin advises me is a first for the Bill, thereby meaning that he and I have both seen two new birds for the Bill this year (shall I whisper Red Breasted Goose quietly?). So now I sent all the previous recipients the good news of the new sighting, well not Justin because he had the good sense to arrive (and as I have already told him I cannot say that I would have found the Egret had he not been there as I was looking towards the West when he found it). Well after that round of satisfied reporting here is the log for the evening, from 6pm to 7.50pm. Virtually all of these birds are after 6.45pm since until then it was literally dead
Red-throated Diver - 2E
Black-throated Diver - 1E
Great White Egret - 1SE (1905hrs)
Common Scoter - 6E
R/b Merganser - 8E
Gannet - 5E, 14W
Ringed Plover - 2W
Pomarine Skua - 3E (all l/p, 1855hrs)
Common Tern - 2 os
Sandwich Tern - 3E, 4W, 4os
Little Tern - 2W
Selsey - Church Norton evening walk:- Short eared owl, female Marsh Harrier, Cuckoo and our first Sedge Warblers, plus 3 Whitethroats and several Swallows.
Selsey East Beach: Against all the odds the Water Rail was still at the pond. Two pairs of Linnet in the bushes at Selsey Common (see pic). They've been here three days now and I'm hoping they stay as I'm pretty certain they nest here. One Swallow flew over. 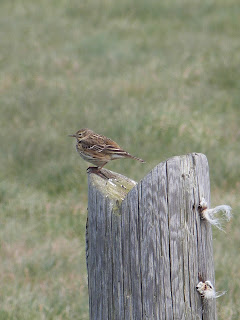 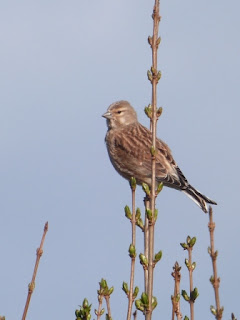 
________________________________
Thursday, 18th April: I arrived at the Bill full of anticipation this morning due to  the brisk south-westerly blowing, only to be disappointed again as the results didn't live up to the hopes. A few of us considered going over to Beachy for the Corncrake, but talked ourselves out of it. Then early on a small flurry of Bonxies and terns occurred before a local council worker arrived and handed us a dead Blackcap he'd found in his Selsey garden; it was to be an omen as after that the sea-watching just died also! Surely there must be a Manxie or something different, but no, so the watch terminated at 1130hrs by which time I was alone. There was some minor compensation when AH phoned to report the first Cuckoo, but it was hard going today. Details to follow... 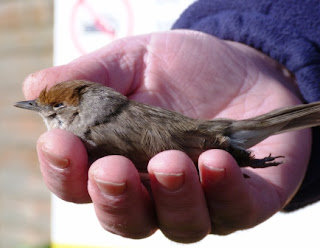 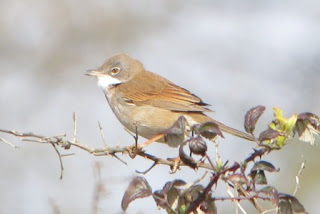 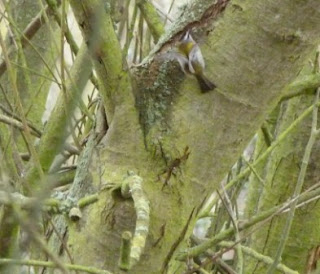 Hastily-taken record shots of Firecrest (above) and Goldcrest (below), Northcommon Farm, Selsey 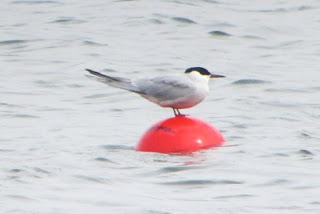 Pagham Hbr: reports today from Church Norton include 2 Whimbrel, a Bar-tailed Godwit, 9 Sandwich Terns, 1-2 Redstarts, a Blackcap, a Willow Warbler and several Chiffchaffs. On the Ferry Pool the 2 Avocets were again present, plus just 8 Shoveler and a few Wigeon and Teal.
In the evening, between East beach-Church Norton, 1 Whimbrel, 3 Bar-tailed Godwits, 5 Wheatears, 1 male Redstart, 2 Whitethroats and 4 Chiffchaffs (SH). 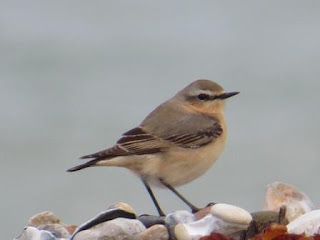