Tuesday, 23rd April: A fine sunny day and once again most of the news eminated from Pagham Harbour. The Bonelli's Warbler sp was clinched as a Western (of which more later) and after giving observers the slip for some while finally showed to most behind the Hide at Church Norton. The Long-eared Owl was not re-located, but in its place (almost at the same spot) was a reeling but none-too-obliging Grasshopper Warbler. Other migrants included several Lesser Whitethroats and plenty of Whitethroats, a couple of Cuckoos and some Whimbrel; a Nightingale was also reported. Sea-watching at the Bill was again a non-event with little coverage achieved today. 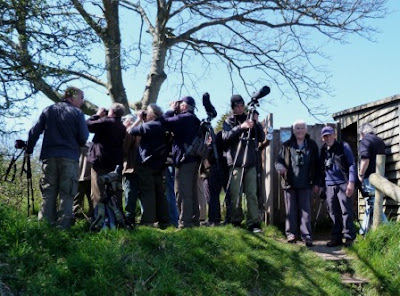 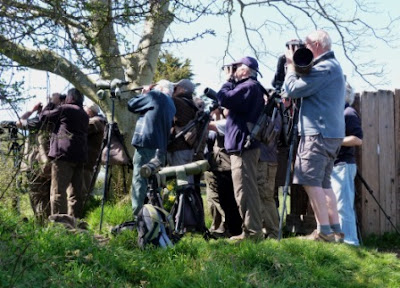 Two views of the action from the crowd gathered behind Church Norton hide
Pagham Harbour: The following report from Bernie Forbes gives details of the morning: "Unfortunately we were a little late this morning and missed the Bonelli's
Warbler seen around 0800-0830hrs behind the Norton hide. A long stakeout
followed with much grumbling and mirth with a few observers giving up and leaving.
Plenty of Blackcap, Willow Warbler and Chiffchaff moving around keeping most
of us on our toes, and some of us could even hear the Lesser Whitethroat belting
out its rattle nearby! Around 1200hours birders started to disperse when
Chris Janman had the bird high in the alders at the bottom of the footpath
from the car park. We could hear it calling for a few moments and confirmed
it is a Western Bonelli's. It once again disappeared for a few minutes
although we could hear it calling before it was finally pinned down south
of the hide and showed well over the next hour or so, mainly in the sallow's
etc between the footpath and the hide."   (BFF).
I would just add that the bird also responded to a recorded call of Western played
briefly, giving a di-syllabic 'hu-eet' note, and also called several times without any
prompting, surely confirming it as WESTERN BONELLI'S WARBLER. (AB/BFF/CRJ/OM et al).
Also in the harbour were 6 Whimbrel, only 2 Sandwich Terns, 4 Med Gulls and 2 calling Cuckoos.
A Nightingale was also reported from Church Norton.

Fishbourne Creek; 2 Greenshanks, 2 Whimbrel, 4 Med Gulls and 2 Red Kites.
_______________________________
Monday, 22nd April: A day when Pagham Harbour stole the show. Yesterday's Long-eared Owl was still present near the cycle track and even more obvious, being perched out in the open, allowing those photographers present to obtain good shots. Then Ivan Lang reported a fem-type Common Rosefinch nearby but sadly it didn't linger and no-one else got to see it. The icing on the cake however was at Church Norton, when visiting birders Ted Raynor and his wife located a BONELLI'S WARBLER sp in the hedgerows behind the Hide. Around 15 observers got to see it before it moved off, and it hadn't re-appeared by the time I left at 4pm. Some observers managed photos and these are awaited... presumably it was a Western, but I didn't hear it call. Selsey Bill by contrast was fairly dire, leaving a few visitors from Bexhill and elsewhere underwhelmed - though it was nice to meet them. A male Pied Flycatcher was reported at Selsey Golf Club (per SOS) - but regrettably the news was not released to the locals by the finder, as far as I'm aware. 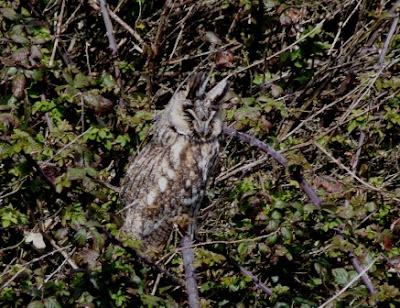 Long-eared Owl, Pagham Hbr; this over-exposed image is the best I could do - doubtless some good images will appear! above and below: (Western) Bonelli's Warbler and Long-eared Owl: photos Martin Peacock (with thanks) 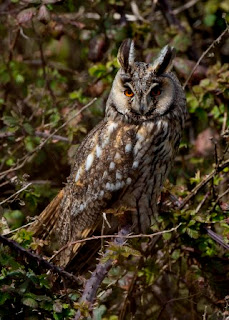 Sunday, 21st April: Following on from my mobile phone problem, I have now acquired a new smartphone which will mean notifying you all of a new number (when I can work out this touch screen mullarky) - which I will do by email - but meanwhile I can receive most texts and calls on the old number but cannot reply. The new phone has me baffled right now. Thanks for your patience.
A very quiet seawatch today with no skuas and few highlights, perhaps the Black-throated Divers being about the best. It seems  the observers present (which didn't include me) packed up early:- 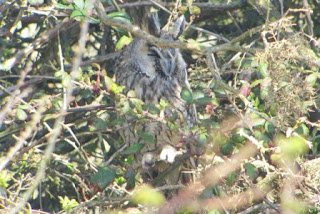 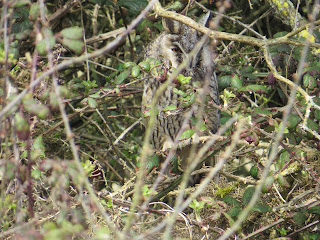